The Somogyi effect, also known as the "chronic Somogyi rebound," or "posthypoglycemic hyperglycemia," was a theory proposed in the 1930s by Dr. Michael Somogyi, who was an Hungarian-born professor at Washington University, St. Louis, MO, United States.[1] He described the paradoxical tendency of the body to react to hypoglycemia by producing hyperglycemia. Somogyi proposed, that when blood glucose levels drop too low during the late evening, activation of counterregulatory hormones such as adrenaline, corticosteroids, growth hormone, and glucagon may be observed, leading to activation of gluconeogenesis and resultant hyperglycemia in the early morning.[2]

More recent studies involving continuous glucose monitoring (CGM), however, have disputed this theory. Also, clinicians have observed that patients with early morning hyperglycemia tend to have high blood glucose measurements at night, rather than low.[1] As a result, the debate continues in the scientific community regarding Somogyi's theory. Moreover, recently proposed mechanisms of morning hyperglycemia include nocturnal growth hormone secretion, hypoinsulinemia, and insulin resistance associated with metabolic syndrome.[3]

The Somogyi phenomenon states that early morning hyperglycemia occurs due to a rebound effect from late-night hypoglycemia. The dawn phenomenon, however, does not include hypoglycemic episodes to be a factor.

With recent studies attributing early morning hyperglycemia is due to the hypoinsulinemia, there is an observable pattern of which the body secretes insulin. The theory is insulin gets secreted in a circadian pattern, with the lowest concentrations between midnight and 6 AM and the highest concentrations between noon and 6 PM.[4] This pattern of insulin secretion is the opposite of melatonin from the pineal gland. The circadian pattern of insulin secretion provides evidence for the dawn phenomenon.

The Somogyi phenomenon has been a proposed phenomenon in insulin-dependent diabetic patients. The thinking is that these patients should monitor their blood glucose levels and adjust insulin dosages as necessary to prevent hypo- or hyperglycemic episodes.

In an individual that does not have diabetes, the blood glucose and insulin concentrations stay flat and constant throughout the night, with a transient increase in insulin just before dawn to prevent hepatic glucose production through gluconeogenesis and prevent hyperglycemia.[5] This explains why nondiabetics do not exhibit the dawn phenomenon, as their insulin levels follow the circadian pattern necessary for optimal glucose control.

Insulin resistance, seen in diabetes or metabolic syndrome, has been associated with constant exposure to high levels of insulin.[6] As patients get diagnosed with diabetes or metabolic syndrome at earlier ages, there is more exogenous insulin exposure that leads to this resistance. Because of this, the normal regulation and pattern of insulin levels make it difficult for insulin-dependent diabetics to control their blood glucose levels during their sleep. Not only is insulin necessary in the regulation of glucose levels, but it is also the primary hormone that inhibits gluconeogenesis.[7] Gluconeogenesis in the morning gets inhibited in a non-diabetic due to the transient increase in insulin right before dawn. As a patient becomes more and more resistant to insulin, the key inhibitor of gluconeogenesis is no longer working; this allows the body to produce more glucose, leading to a hyperglycemic state.

The Somogyi phenomenon had been considered in the past; an essential consideration for the proper diagnosis and management of blood glucose levels is vital for the body’s metabolic demands. The post-hypoglycemic hyperglycemia raises to question whether or not a patient’s insulin levels should be adjusted in the evening to prevent hyperglycemia in the mornings. As this is something ideally avoided, the Somogyi phenomenon occurs too infrequently to make this standardized practice. The importance of avoiding both hypoglycemia and hyperglycemia and why the Somogyi phenomenon is clinically significant can be reasoned with when describing the different side effects of abnormal blood glucose levels.

Glucose control is vital for brain metabolism and function, as it is the primary substrate for proper brain activity. The body has different regulatory molecules that act to decrease the likelihood of low blood glucose. The first response thought to activate due to low blood glucose is the counterregulatory hormone mechanism.[8] Other mechanisms include glycogenolysis, the breakdown of glycogen into glucose, and gluconeogenesis, de novo production of glucose, which both take place in the liver.[7] The ideal plasma glucose concentration ranges from 70 to 140 mg/dL throughout the day.[9] Both glycogenolysis and gluconeogenesis can activate when levels fall below this range. Another mechanism induced by hypoglycemia includes a decrease in the pancreatic beta-cell secretion of insulin and an increase in the pancreatic alpha-cell secretion of glucagon. Glucagon, epinephrine, and glucocorticoids will increase to induce glucose production in the body.[10] A hypoglycemic episode puts patients at risk for neurological dysfunction, coma, or even death.[10] With repeated hypoglycemia, the counterregulatory system that is supposed to keep blood glucose levels in range will start to fail.[10] Signs of hypoglycemia that patients are to be aware of include diaphoresis, hunger, irritability, loss of consciousness, seizures, and confusion.[10]

Hyperglycemic episodes are also to be avoided. Symptoms to look out for include polyuria, polydipsia, weakness, tachycardia, and hypotension.[11] The hyperglycemia will worsen the cytokine and inflammatory response, causing even more hyperglycemia.[11] Consequences of hyperglycemia include renal failure, polyneuropathy, retinopathy, and arrhythmias.[11] Hyperglycemia produces an increase in advanced glycation end products (AGEs), which deposit in the body, causing connective tissue crosslinking, fibrosis, and impaired relaxation of the heart.[12] People with diabetes become insulin-resistant, which keeps blood glucose levels elevated, causing an even more increase in AGEs.[12] With the failure to keep blood glucose levels at a normal range, the hyperglycemic episodes also induce the renin-angiotensin-aldosterone system (RAAS), increasing vascular resistance and arterial pressure in the body.[12]

As an interprofessional team, there are many things to consider in the management of a patient’s blood glucose concentrations. Theoretically, the risks of adjusting a patient’s insulin in case they undergo the Somogyi phenomenon could risk the potential consequence of increasing a patient’s chance of becoming severely hypoglycemic. Although the risk of the Somogyi phenomenon in clinical practice has not shown to have significance.

It is essential to coordinate care by involving the patient in discussions regarding proper glucose management. Lifestyle modifications and being aware of the symptoms for hypoglycemia or hyperglycemia requires discussion in great detail with the patient. It will allow them to make well-informed decisions regarding their food choices, lifestyle habits, and activity levels.

The importance of maintaining proper blood glucose levels in any patient is apparent from both ends of blood glucose level abnormalities. Using the Somogyi phenomenon as a precaution for standard in practice does not have enough evidence. Instead, this theory can be used to help monitor patient’s blood glucose levels throughout different times of the day to see if they fit the theory.

Clinical studies suggest that it is underdosing of insulin from the previous night that fails to prevent hyperglycemia.[2] Another study on Type 1 Diabetes patients suggested that nocturnal hypoglycemia is usually associated with early morning hypoglycemia, not hyperglycemia.[13] In clinical practice, patients with hypoglycemic episodes at night, do not wake up in the morning with hyperglycemia, hence refuting Somogyi Phenomenon.

In a study done at the Washington University School of Medicine to test the hypothesis of the Somogyi phenomenon, the conclusion was that the nocturnal hypoglycemia did not cause daytime hyperglycemia.[14] It showed no correlation between increased daytime glucose levels with the concentrations of counterregulatory hormones such as glucagon, epinephrine, growth hormone, or cortisol.[14] This study disproved the theory of Dr. Somogyi. 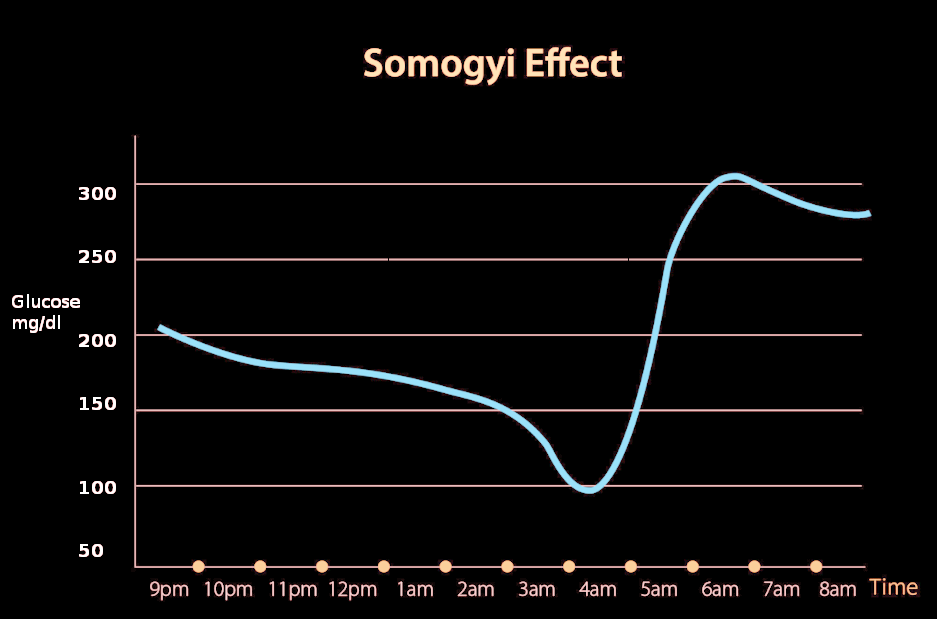 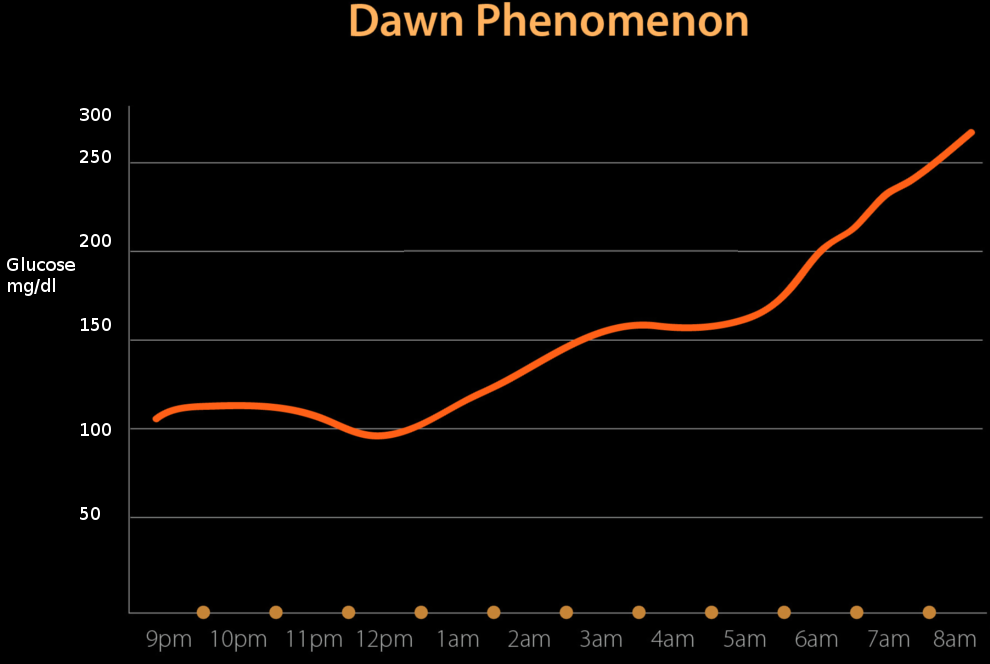