Invented in 1862 by a Dutch ophthalmologist named Herman Snellen, the Snellen chart remains the most widespread technique in clinical practice for measuring visual acuity.[1][2] The Snellen chart serves as a portable tool to quickly assess monocular and binocular visual acuity. Throughout history, there have been several charts utilized by eye care professionals. The most common in clinical practice is the Snellen chart, while research studies more often use logMAR charts, such as the Early Treatment of Diabetic Retinopathy Study (ETDRS) chart.

The Snellen Chart uses a geometric scale to measure visual acuity, with normal vision at a distance being set at 20/20. The numerator represents the distance that the patient is standing from the chart (in feet), while the denominator represents the distance from which a person with perfect eyesight is still able to read the smallest line that the patient can clearly visualize. For example, a patient standing 20 feet away from the chart who can clearly read until the line of font that a person with normal visual acuity can read from 40 feet away would be measured as 20/40 vision. A similar assessment for testing near vision can be done using a pocket card held about 14 inches from the patient's eyes. There are only nine letters on the chart, known as optotypes: C, D, E, F, L, O, P, T, and Z. Finally, the sizing of letters is geometrically consistent, meaning that optotypes representing 20/40 are twice the size of those representing 20/20.

Other notable visual acuity charts include the following:

While the Snellen chart is prized as a quick, low cost, and portable tool, there are several drawbacks to its use. These disadvantages, outlined below, gave birth to the improvements seen in newer charts, such as the ETDRS.

Every line of the chart contains a different number of characters, i.e., eight characters on the 20/20 line and only 1 letter on the 20/200 line.[8] This presents confusion when a patient's medical record shows, for example, a gain of 3 letters of acuity, which could indicate a small improvement on the 20/20 line or a gain of an entire acuity line in the 20/70 acuity. Furthermore, the progression between lines is variable, with different spacing from line to line. As such, a two-line improvement in acuity could represent a gain of 33% from 20/30 to 20/20 or a gain of 50% from 20/100 to 20/50. The lack of standardization in line progression, as well as the spread of the measurements, makes it difficult to make statistical comparisons on acuity data.[9] Additionally, the distance between rows and characters varies considerably, creating a crowding phenomenon of adjacent contour interactions, reducing acuity.[10] Finally, some letters (i.e., L, T, A) are reportedly easier to see than other letters (i.e., B, S, C).[11]

The use of the Snellen chart is limited to those patients familiar with the Roman alphabet and free of any other language, literacy, or verbal communication difficulties.

Administering the Snellen chart test requires that the patient focus his/her attention for the duration of the test and cooperate by following the instructions given. For those patients who are unable to cooperate due a physical or mental disability or for pediatric patients, this test may prove challenging to administer.

An important component of the cranial nerve 2 (optic nerve) exam is testing the visual acuity. Visual acuity assessment has been used clinically for hundreds of years as a useful tool to gauge the clarity of a patient's vision. When interpreting visual acuity using the Snellen chart, it is important to note that 20/20 vision is not synonymous with perfect vision, but rather, indicates a measure of a patient's clarity of eyesight from a distance. Overall visual ability encompasses a variety of other vision skills, including peripheral vision, eye coordination, depth perception, ability to focus on objects, and color vision. Furthermore, visual acuity assessment using the Snellen chart does not give a patient's prescription. The prescription is a separate measurement that must be evaluated by an eye professional in an office setting.

Hyperopia (farsightedness) describes the condition where patients have clear eyesight from a distance but cannot focus well on objects that are near. Another type of farsightedness is presbyopia, which typically develops after age 40 due to a loss of the elasticity in the eye's natural lens. On the other hand, myopia (nearsightedness) describes the condition where patients can see objects that are near well but have trouble seeing objects at a distance. A comprehensive eye examination by a licensed eye professional is needed in order to diagnose the condition compromising a patient's vision and determine whether refractive therapy is needed or more extensive workup is required for vision-threatening diseases, such as coloboma or carotid-cavernous fistula.[12]

The following abbreviations are commonly used in the reporting of visual acuity measurements.

Mobile smartphone apps, such as the SightBook mobile app, have been developed to allow patients to remotely monitor their visual acuity.[13][14] While the potential applications of this software are phenomenal for patients to track their eye disease improvement and ultimately reduce the cost of care, no Snellen visual acuity apps have been identified that could accurately measure visual acuity within one line. Further validation is warranted to explore the future applications of this endeavor.

An interprofessional care team of nurses, allied health professionals, and physicians must maintain a collaborative and communicative environment to achieve positive patient outcomes. Regarding the Snellen chart, the interprofessional team often includes primary care physicians, hospitalists, ophthalmologists, optometrists, technicians, and nurses. Standardized testing procedures, as outlined above, as well as consistent reporting of visual acuity measurements, provide greater reliability of Snellen chart test results. An example of this can be seen in the case of a hospitalist testing the visual acuity of a temporal arteritis patient in dim lighting and reporting the acuity as 20/70. In contrast, the next day, the ophthalmologist uses the Snellen chart in good lighting and measures the patient's acuity to be 20/50. Despite the progression of vision loss overnight, the Snellen chart results misleadingly suggest an improvement in visual acuity because of the lack of standardization in testing procedures. 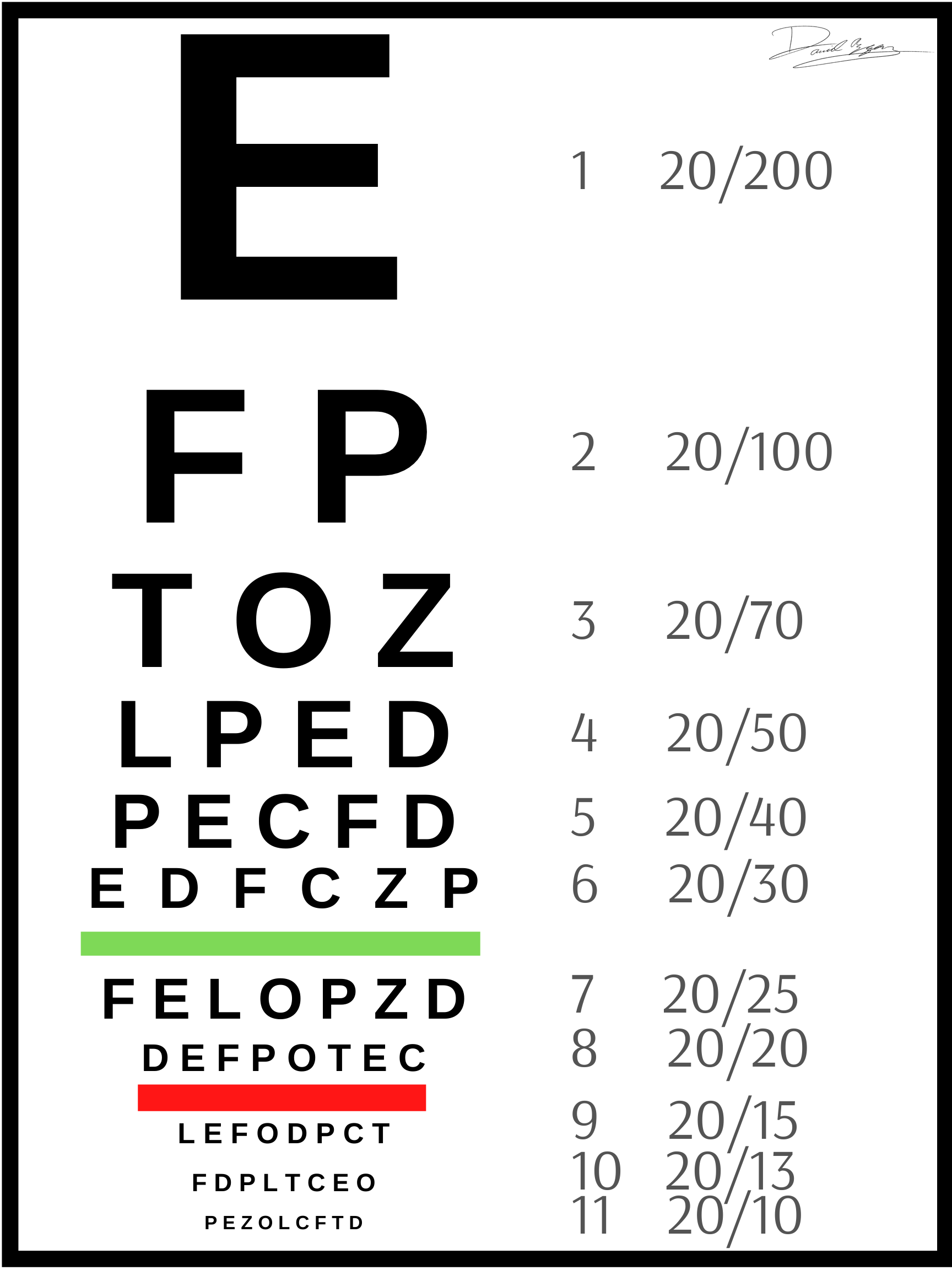