Scorpions are a common arthropod found on every continent except Antarctica. Scorpions may use their long, flexible tails to sting potential predators. Often, individuals unknowingly come into contact with scorpions and are stung, causing painful sensations associated with envenomation. This activity describes the presentation, pathophysiology, and treatment of scorpion stings and highlights the role of the interprofessional team in improving care for affected patients.

Scorpions are a common arthropod on every continent except Antarctica. If threatened, a scorpion may use its long, flexible tail to sting a potential predator. Frequently, people unknowingly come into contact with these species and experience the painful sensation of envenomation. While the vast majority of scorpion stings do not result in life-threatening situations, scorpion stings can produce life-threatening situations. When a victim of a scorpion sting presents to the emergency department, there are a few things to keep in mind to guide care for the patient safely.[1][2][3][4]

While there are roughly 1750 species of scorpions in the world, only 25 are considered to be lethal to humans. In most cases, the sting of a scorpion causes pain but is relatively harmless to a healthy adult. Species found in Asia, Africa, and South America may need medical attention due to the potentially toxic effects of their venom. Rather than just causing a local skin reaction, these species are capable of producing systemic symptoms, including hemolysis, hemorrhage, and neuromuscular dysfunction. Scorpions may sting many times, but their venom becomes depleted with each sting.

The effect of the scorpion sting is highly dependent on the species. While species like Centruroides and Parabuthus cause neuromuscular issues, Buthus, Mesobuthus, and Androctonus exhibit life-threatening cardiovascular effects. These worrisome effects are mostly seen in the elderly and even more so in infants and young children. In the United States, Centruroides exilicauda is the most common culprit of envenomation, while Centruroides vittatus is the second most common. There are no reported deaths from scorpion envenomation in Arizona since 1968. Supportive care usually prevents mortality.

In Mexico and the United States, many scorpion stings occur each year; however, only a few cause systemic effects. When severe symptoms do occur, they are usually due to the Centruroides species.[5][6] Gradings of the severity of envenomation were created for incidents involving the Centruroides or Parabuthus scorpions.

Grade 1 involves local pain and paresthesias at the sting site. The puncture wound may not be noticeable in this grade. The "tap test" may confirm a provider's suspicion of a sting by exilicauda by distracting the patient and tapping on the area of the sting, causing increased pain. This reaction does not occur with other species. Care is limited to analgesia. Historical and epidemiologic clues may also help in confirming a scorpion sting.

Grade 2 involves local pain and paresthesias existing at the sting site as well as proximal to the sting site. Recommended care includes analgesia with optional anxiolytics if needed. More distant symptoms can radiate up to the same extremity or even to the contralateral limbs.

Grade 3 includes grade 2 classification factors with added cranial nerve (increased oral secretions, blurry vision, rapid tongue movement, nystagmus), or skeletal neuromuscular dysfunction (flailing of the extremities and tetanus-like arching of the back) and can also be accompanied by autonomic dysfunction. Grade 3 envenomations can sometimes affect airways. Patients with Grade 3 stings require analgesia and anxiolytics as well as antivenom. Centruroides do sometimes produce autonomic dysfunction, and most commonly, symptoms include salivation, vomiting, bronchoconstriction, diaphoresis, and tachycardia. Parabuthus stings can also produce autonomic dysfunction, but uniquely, it can lead to urinary retention.

Unlike grade 3 envenomations where the patient will experience either cranial nerve or skeletal muscle dysfunction, grade 4 envenomations include both. This can cause hyperthermia, up to 104 degrees F, rhabdomyolysis, pulmonary edema, and multiple organ failures. Again, antivenom is critical in this situation. Adults do become envenomed more often than children; however, children do exhibit more severe illness as a consequence more often than adults.

Although less than 10% of scorpion stings cause systemic symptoms, those that do can be serious. Neurotoxins are the mainstay of symptomatology in envenomations. The venom of some species can cause prolonged depolarization by causing incomplete inactivation of sodium channels resulting in a slow influx of sodium. This influx then leads to membrane hyperexcitability and unregulated axon firing by inhibiting the inactivation of an action potential. The neurotoxins also cause the excessive release of acetylcholine from parasympathetic ganglia as well as the release of epinephrine and norepinephrine from sympathetic ganglia and the adrenal glands. In turn, envenomations can produce cholinergic as well as sympathetic stimulation. Typical cholinergic symptoms include diaphoresis, priapism, lacrimation, vomiting, diarrhea, and bradycardia. Typical sympathetic symptoms include hypertension, tachycardia, and restlessness.[7]

Most scorpion stings cause a local inflammatory reaction and pain. When the venom affects the sodium channels, this may manifest as seizure-like activity in the patient and obscure the clinical picture, especially when the child or infant is unable to relay an accurate history. Intubation may be required in these patients, as motor hyperactivity of the pharyngeal muscles and uncontrolled diaphragmatic and intercostal neuromuscular activity may occur. These symptoms may progress quickly, causing impending airway collapse. In the select species causing cardiopulmonary effects, tachycardia, pulmonary edema, and more importantly, cardiogenic shock may be present. While uncommon, there are documented cases of local tissue necrosis days to weeks after the initial sting.

History and physical most commonly diagnose scorpion stings. Usually, the patient can visualize the scorpion, and the practitioner will observe an erythematous area on the skin with local inflammation. Numbness and weakness at the site may also occur. If concern for systemic organ involvement, basic laboratory studies are recommended, including a complete blood count, a comprehensive metabolic panel, PT/INR, PTT, and lipase. Laboratory studies are usually reserved for patients with severe (grade 3 to 4) envenomations. Scorpion stings are known to be an uncommon but real cause of pancreatitis.[4][4][6]

Most stings only require supportive therapy, including ibuprofen, cleaning of the sting area, and tetanus prophylaxis. Patients should remain under observation for at least 4 hours, but the onset of life-threatening symptoms occurs much quicker in children, with an average of 14 minutes. In patients displaying severe symptoms such as hypersalivation, clonus, rapid eye movements, or restlessness, immediate intervention is critical. These patients may need endotracheal intubation due to the possibility of a rapid onset of severe pulmonary edema. As cardiogenic shock can complicate this, the administration of dobutamine has demonstrated to be helpful. Intravenous benzodiazepines may be an option if the patient displays muscle spasticity. Antivenom is reserved for patients showing skeletal muscle, or cranial nerve dysfunction who are stung by either Centruroides or Parabuthus It is available in the United States, which is intravenous scorpion-specific F(ab’)2 equine antivenom. It is intravenously dosed at three vials in 20 to 50 mL of normal saline and infused over 30 minutes. It can reduce the duration of clinical symptoms if given within 4 hours of the sting. The recommended dose is three vials, followed by an additional two if symptoms continue.

Complications are low and comprise mostly serum sickness (0.5%). Newer versions of antivenom are considered much safer than the previous antivenom, which was marketed in 1965 and taken off shelves in 2001 due to its high rates of anaphylaxis (3.4%). There are no reported cases of anaphylaxis in patients administered the newer formulation. Although effective, the more recent version can be quite expensive, with some hospitals charging upward of $40,000 per vial. IV fluids, epinephrine, and intubation equipment should be made available before the administration of the antivenom in case of anaphylactic shock. If a patient is observed for 4 hours and is determined to have a mild sting, is tolerating oral intake, and has adequate pain control, the patient may be safely discharged home with return precautions. The efficacy of the Anascorp was determined to reduce the duration of clinical signs and symptoms in patients with Grade III or IV envenomations. In one trial involving 15 children, the eight who received the antivenom had complete resolution of symptoms within 4 hours; versus only one of the seven who received a placebo. Although the antivenom can be quite expensive, the cost of the prolonged hospitalization does seem to provide advantages to providing patients with the antivenom in those that have a Grade III or IV envenomation.[8]

Scorpion stings are best managed through an interprofessional approach that includes first responders, ER providers, and a poison control center. Most patients only require supportive treatment with pain control. In rare cases, the patient may need longer observation in the ICU.  When a grade 3 or 4 envenomation is suspected, the provider should always contact the closest poison control center for assistance and further recommendations. Although most scorpion stings are mild and not life-threatening, scorpion stings can cause significant harm to the patient, especially in very young or elderly patients. In these patients, securing the airway is critical if they are unresponsive to antivenom and other medical interventions, as mentioned above. 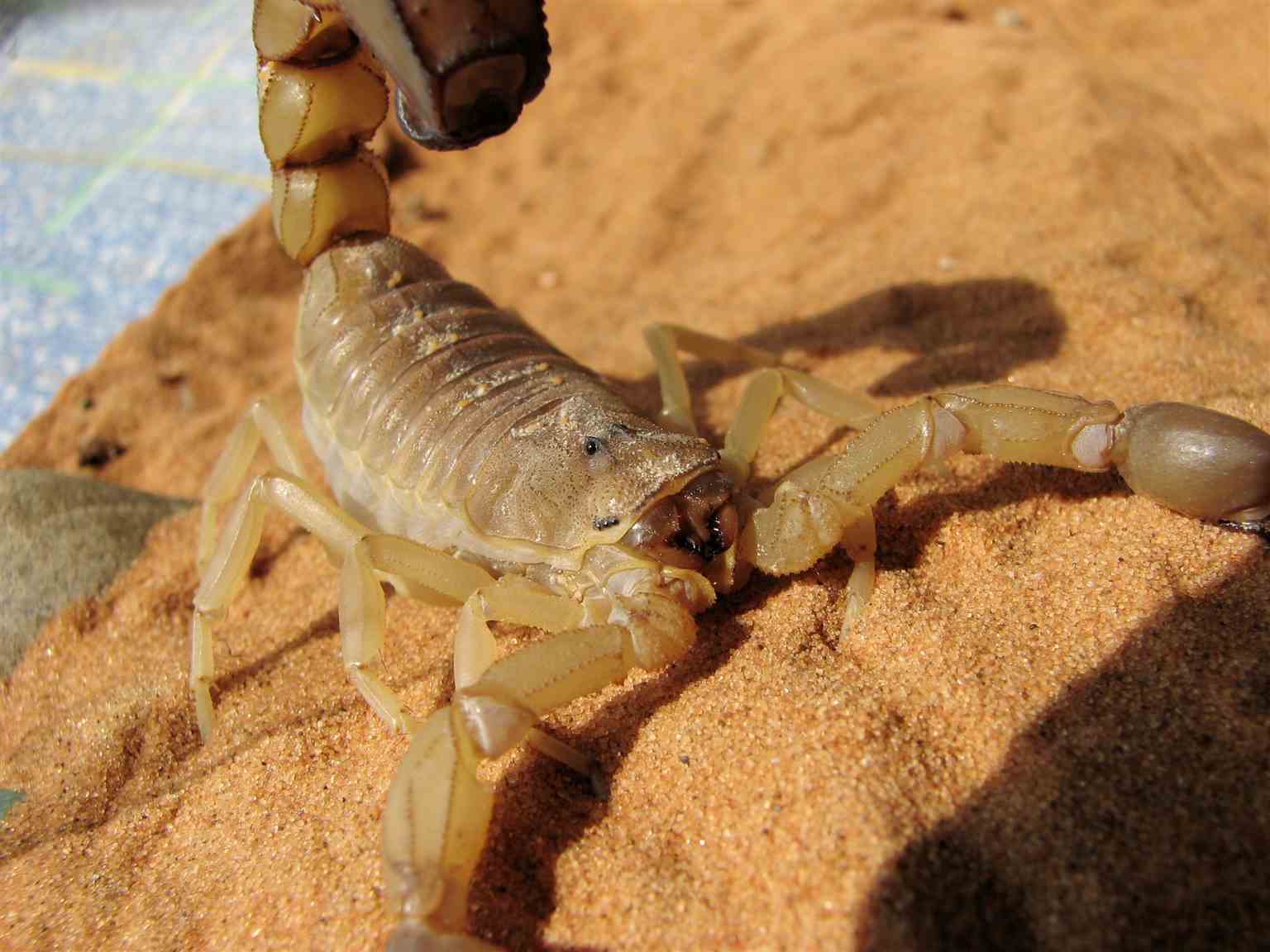