Schilling test was named after Dr. Robert F. Schilling for his work on detecting radio-cobalt-labeled, vitamin B12 in the urine. Despite this test being no longer used due to recent advances in laboratory techniques, it has been beneficial in the past as a means of detecting the absorption rate of an administered load of vitamin B12 in a patient and aiding in understanding the exact cause of the problem.[1][2][3]

The patient is given oral doses of vitamin B12, and their 24-hour urine level of cobalamin is studied.[4][5][6]

This test is divided into two main stages:

The patient is given radiolabeled vitamin B12 orally, followed by an intramuscular (IM) dose of unlabeled vitamin B12 one hour later. The injection is given to ensure that none of the radioactive B12 binds to any vitamin B12 depleted tissues, for example, the liver. A 24-hour urine collection monitors the absorption and excretion.

If the previous stage provides an abnormal result, stage 2 can be done to assess whether there is a deficiency of the intrinsic factor. Stage 1 is repeated along with an oral dose of intrinsic factor. A 24-hour urine collection is carried out to assess the level of vitamin B12.

There can be many reasons for an abnormal test. One of them is bacterial overgrowth, and for that reason, stage 3 of the test may be performed. In this stage, a 2-week course of antibiotics is prescribed before giving another dose of labeled vitamin B12.

If stage 3 results are abnormal, stage 4 of the test is performed to reveal any underlying problems with the pancreas causing deficiency of vitamin B12. In this stage, a 3-day course of pancreatic enzymes is given to the patient followed by the administration of the radiolabeled dose of vitamin B12. A urine sample is collected over 24 hours.

The most common features of vitamin-B12 deficiency include severe macrocytic anemia and variable neurologic abnormalities such as shuffling gait, with no improvement observed upon the administration of folic acid.

During Stage 1, a healthy person will be able to absorb the administered radioactive B12 in their terminal ileum. It will then be excreted in the urine. If there are any defects with the cubam receptor at the terminal ileum, the result will show a low level of labeled cobalamin in urine as it will remain in the intestines and is likely to be excreted in feces. A defect associated with low levels of an intrinsic factor will also produce a similar abnormal result.

Patients with an abnormally low level of cobalamin in the urine in stage 1 usually undergo stage 2. If stage 2 shows a normal level of excreted vitamin B12, it means that the patient has low intrinsic factor levels, and one possible cause is pernicious anemia. If the test still indicates a low level of vitamin B12 in the urine, it means that the patient has a poor intestinal absorption of cobalamin. Further tests should be done to assess the cause of malabsorption that can include Crohn disease, small bowel bacterial overgrowth syndrome, and infection by Diphyllobothrium latum.

A normal patient will show a normal level of cobalamin in urine upon administration of the oral dose. If the urine level is abnormal, it can be from either an absorption defect in the terminal ileum or a lack of intrinsic factor.

Excreting 8% to 40% of the radioactive vitamin B12 in the urine within 24 hours is considered a normal finding. The values, however, may fluctuate between laboratories.Stage 2

If the abnormal result of stage 1 improves with intrinsic factor administration, it means that the patient has intrinsic factor deficiency. If the patient still has a low urine level of cobalamin, then there is an absorption defect in the terminal ileum, and further tests should be done to investigate.

If the patient has an acute illness leading to nausea, diarrhea, and vomiting, the level of vitamin B12 available for absorption will be lower, and the results will be suboptimal.

The provider should make sure that the patient has no allergy to the radiolabeled cobalamin administered.

The patient should be advised to inform the physician of any known allergy to any of the materials used. Patients are advised to avoid any food intake for 8 hours before starting the test but can drink water. After the test, the patients can resume their normal eating habits.

Vitamin B12, also known as cobalamin, has a vital role in the normal synthesis of myelin.[1] It is a water-soluble vitamin, and its absorption is essential for many other processes such as DNA synthesis, red blood cell maturation, and fatty acid metabolism.[2] Orally taken vitamin B12 first binds to an R-protein, also called haptocorrin and cobalophilin, once it is released from the food. This R-Protein, produced by salivary glands, protects vitamin B12 against the acidic environment of the stomach. In the duodenum, the R-protein is cleaved from the vitamin B12 via pancreatic proteases, and an intrinsic factor (IF) that is produced by the parietal cells of the stomach binds to the vitamin B12. This intrinsic factor is important for the proper absorption of vitamin B12 via the cubam receptor located at the terminal ileum.[3] Since there are multiple steps and factors involved in cobalamin absorption, a defect in R-binder, intrinsic factor, or terminal ileum can lead to vitamin B12 deficiency.

In pernicious anemia, there are autoantibodies produced against the parietal cells. This leads to a lower level of IF, and hence the absorption of cobalamin is affected. In patients with terminal ileum defects such as Crohn disease, the cubam receptor is likely to be affected, thus resulting in the non-absorption of the IF-B12 complex into the enterocytes.[4]

Currently, the Schilling test is not readily available in most countries to diagnose vitamin B12 deficiency. Labeled cobalamine can no longer be obtained. No replacement test provides the same information, but the level of serum vitamin B12 is now a test of choice in many hospitals. Patients with more than 300 pg/mL are normal, 200 to 300 pg/mL borderline, and less than 200 pg/mL classified as deficient in vitamin B12. The levels of homocysteine and methylmalonic acid are also usually investigated and elevated in those patients. Other options are the CobaSorb test that measures changes in circulating holo-transcobalamin before and after B-12 administration, and the 14C-labeled B-12 test for quantitative measurement of absorption of a low-dose radioactive tracer. 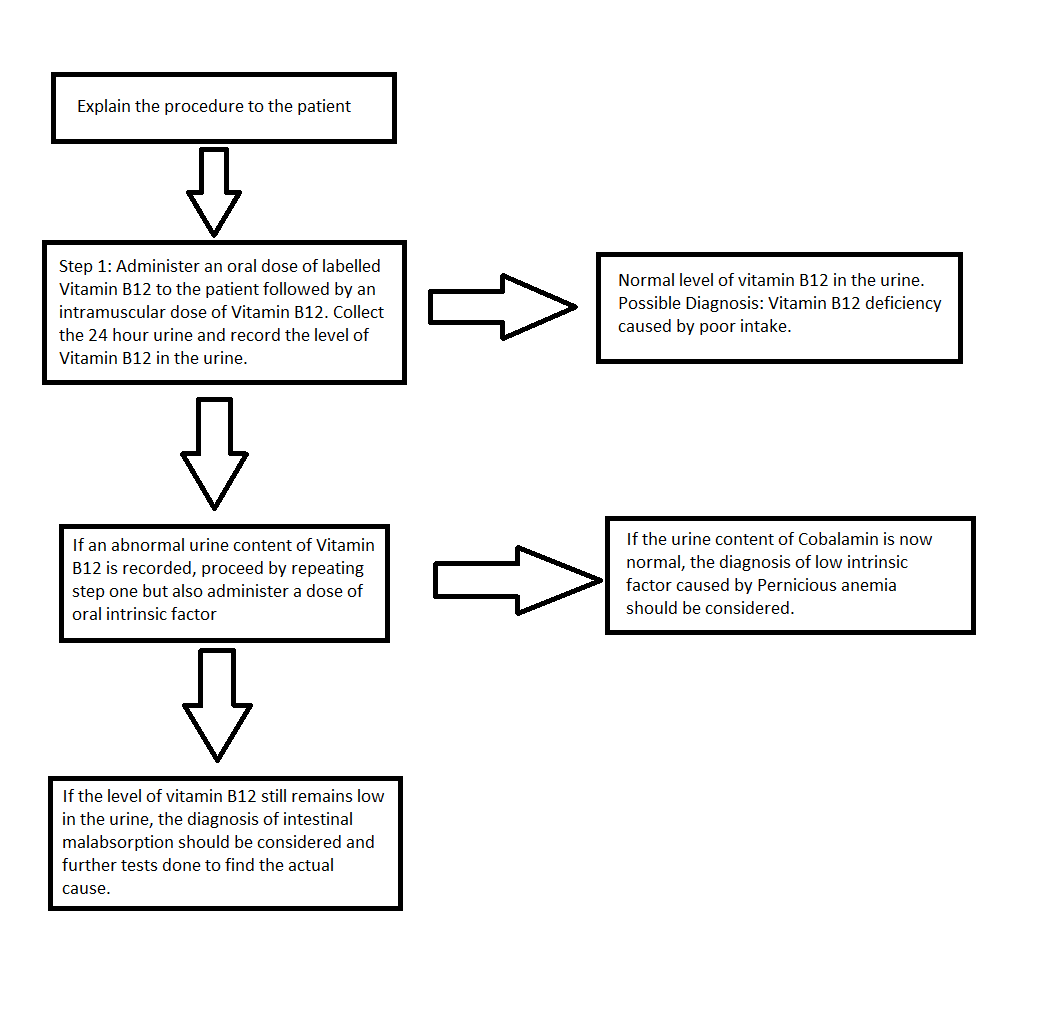 A step by step guide of how Schilling Test is done.
Image prepared by Dr. K.Ramphul