Scheuermann kyphosis, also known as Scheuermann disease, juvenile kyphosis or juvenile discogenic disease, is a condition involving an abnormal, excessive curvature of the spine. It involves both the vertebral bodies and discs of the spine and is characterized by anterior wedging of greater than or equal to 5 degrees in 3 or more adjacent vertebral bodies. Type 1 Scheuermann disease involves the thoracic spine, whereas type 2 involves both the thoracic and lumbar spine. Scheuermann disease typically presents with postural deformity and subacute thoracic pain in adolescents. Management of this condition involves lifestyle modification, stretching exercises, and non-steroidal anti-inflammatories. Additionally, a brace is indicated for more extensive disease and surgical intervention is indicated for patients with a greater degree of kyphosis, neurologic deficits or severe refractory pain. This activity outlines the evaluation and management of Scheuermann disease and illustrates the role of the interprofessional team in improving care for patients with this condition.

Scheuermann kyphosis, also known as Scheuermann disease, juvenile kyphosis or juvenile discogenic disease, is a condition of hyperkyphosis that involves the vertebral bodies and discs of the spine identified by anterior wedging of greater than or equal to 5 degrees in 3 or more adjacent vertebral bodies. The thoracic spine is most commonly involved, although involvement can include the thoracolumbar/lumbar region as well [1].

Most commonly, diagnosis is made in adolescents aged 12 to 17 years who present after their parents notice a postural deformity or “hunchbacked” appearance. Pain in the affected hyperkyphotic region may also be the cause of initial evaluation [2].

There is a hereditary component associated with this condition, although the exact mode of transmission is still unclear. This is supported by the fact that incidence is higher in monozygotic versus dizygotic twins [1].

Definitive and universally accepted etiology of Scheuermann kyphosis remains undetermined. As previously mentioned, a hereditary component is understood to contribute to this condition's development, although the mode of transmission is still unclear.

Exact pathophysiology as it relates to Scheuermann kyphosis is still undetermined. Likely, genetic inheritance as well as OR resulting in discordant vertebral endplate mineralization and ossification during growth, causing disproportional vertebral body growth with the resultant classic wedge-shaped vertebral bodies that lead to kyphosis [5][6][5].

Suggested components that might explain or partially explain this condition, among many others, include abnormal collagen to proteoglycan ratios, dural cysts, childhood osteoporosis, biomechanical stressors such as tight hamstrings, and growth hormone hypersecretion.

The most common findings associated with this disease include thoracic spine hyperkyphosis as defined by the diagnostic criteria commonly associated with irregular vertebral endplates, Schmorl nodes, and loss of disc space height noted on sagittal imaging studies [3].

The adolescent will present with (1) cosmetic/postural deformity and/or (2) subacute thoracic pain. The deformity is typically appreciated in the early-mid teenage years by child, parents, or on a school screening exam. With respect to subacute thoracic pain, there is usually no identifiable inciting event. The pain is worse with activity and improved with rest.

Physical exam shows rigid hyperkyphotic curve, accentuated with forward bending. The hyperkyphosis does not resolve with an extension or lying prone/supine, further supporting the “rigid” nature of this deformity. Other associated findings on an exam might include cervical or lumbar hyperlordosis, scoliosis, and tight hamstrings. Although neurologic deficits are uncommon, a thorough neurologic exam must be completed [2][4].

History and physical along with AP/lateral radiographs comprise the essential components for evaluating Scheuermann kyphosis. Lateral radiographs are required for diagnosis, and diagnostic criteria including the following [4]:

Although typically not a necessity, MRI can be helpful to further evaluate anatomic changes or for pre-operative planning. CT imaging is usually not needed. There are also no specific laboratory tests or histologic findings necessary for the diagnosis of Scheuermann kyphosis.

The majority of patients are successfully treated with conservative measures as previously discussed [2]. Pain in the affected region typically improves after skeletal maturity is reached, although patients with Scheuermann kyphosis are at increased risk of chronic back pain as compared to the general population.

Patients with a kyphotic curve less than 60 degrees at skeletal maturity typically have no long-term sequelae.

For surgical patients, inpatient rehabilitation might be necessary for mobility and strength training as well as aggressive postoperative pain management.

Although not always a necessity, it is good practice for any patient with some degree of suspected spinal deformity to establish care with either an orthopedic spine surgeon or neurosurgeon.

Neurosurgery or orthopedic spine surgery consultation should be obtained for any patient with the following:

Although the overall prognosis of this disease is relatively good, given young patients are most commonly affected it is important and medically prudent to notify the patient and family members early in their course of care the potential for long-term sequela and the unpredictable nature of things such as chronic back pain associated with the condition. 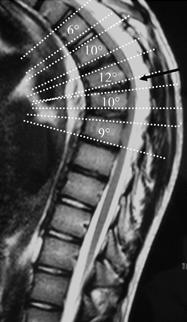 Sagittal MRI demonstrating anterior wedging of >/= 5 degrees in 3+ adjacent vertebral bodies, as described in the diagnostic criteria for Scheuermann's kyphosis.
Contributed from the Public Domain