In electrocardiology, a vector represents both the magnitude and direction of the action potential generated by an individual myocyte. The sum of all the individual vectors generated by the depolarization waves makes up the electrical axis. Because each myocyte can produce an action potential, an axis for each wave and interval of the cardiac cycle can be determined. Knowing the axis of each and how they interact can reflect certain pathology.

When the electrical axis is discussed and taught, the ventricular axis is typically used in common clinical practice, although the atrial axis can be quite useful in clinical situations. Since the left ventricle makes up most of the heart muscle under normal circumstances; thus, it generates the most electrical force visible on the EKG. The normal ventricular axis is thus directed downward and slightly towards the left.

The ventricular (QRS) axis is determined indirectly by evaluating the vectors produced under the electrodes. This is done by interpreting the electrical signal (QRS complex) recorded at each electrode as positive, negative, or isoelectric and then considering their relationship with each other.

There is some disagreement on the exact degrees that define each type, but some general cutoffs can be used for the QRS axis.

There are multiple methods to determine the electrical axis. The following are a few of these simple and adequate approaches to assess the ventricular (QRS) axis. Hence, the focus will be on the QRS complexes in specific leads.

One issue with this method is that it only gives a close approximation to the true axis. In addition, it narrows the normal axis range. This can result in an inaccurate interpretation of the true electrical axis. For instance, if using this approach with a positive lead I and negative lead aVF, the axis would be interpreted as LAD. However, if the true axis were -20 degrees, which lies in the LAD quadrant using this method, it would still be within the normal axis range. Nevertheless, this method is easy to learn and sufficient in most cases.

One way to resolve these issues is by locating the most isoelectric limb lead and knowing that the true axis lies nearly perpendicular to it. Using this can help narrow the axis down to within 10 degrees of the normal axis.

Method 2. A more accurate approach than the simple quadrant approach takes into account leads I and aVF, as well as lead II. This is referred to as the three-lead method. If the net QRS deflection is positive in both leads I and II, the QRS axis is normal. If the net QRS deflection is positive in lead I but negative lead in II, then there is LAD. Notice that in both cases, lead aVF was not needed. In other words, if lead I is positive, look next to lead II. Now, if lead I is negative, look next to lead aVF. If lead aVF is positive, then the axis is rightward; however, if lead aVF is also negative, then there is the extreme axis. This approach is summarized in Figure 4 and Table 1.

Method 3. Another simple way to estimate the ventricular (QRS) axis is to locate the most isoelectric limb lead along the frontal plane. The isoelectric (equiphasic) lead represents the lead with a net amplitude of zero and the smallest overall amplitude. The QRS axis is approximately perpendicular (90 degrees) from the positive pole of that lead.

Causes of RAD include:

Determining the ventricular (QRS) axis in the setting of a bundle branch block is controversial. With the right bundle branch block (RBBB), RAD or LAD may indicate a bifascicular block. Thus, knowing that the terminal portion of the QRS complex reflects the delay in right ventricular activation with RBBB, one approach to estimating the frontal plane axis is by using the initial 80 to 100 millisecond (ms) of QRS deflection, which primarily reflects left ventricular activation. Similarly, with left bundle branch block (LBBB) and other intraventricular conduction delays, the initial 80-100 ms of the QRS deflection or the entire QRS complex can be used to determine the axis.[8][9][10]

Determining the electrical axis on an electrocardiogram can help narrow the differential diagnosis and lead to an efficient diagnostic approach for the patient. This will help decrease the time needed to arrive at the right diagnosis and improve patient outcomes. An interprofessional team of clinicians, nurses, and technicians trained in interpreting an EKG is needed to achieve this goal. An emergency department nurse trained in potential implications of axis deviation can help the clinicians provide prompt and prudent diagnostic and therapeutic care for the patient. A cardiac specialty-trained nurse can assist the clinicians in monitoring patients with acute cardiac pathology to help treat potential complications. A nurse well-versed in interpreting an EKG, especially regarding the electrical axis determination and its significance, should communicate this finding with the clinicians. In doing so, a collaborative interprofessional team of healthcare providers can improve patient care and outcomes. [Level 5] 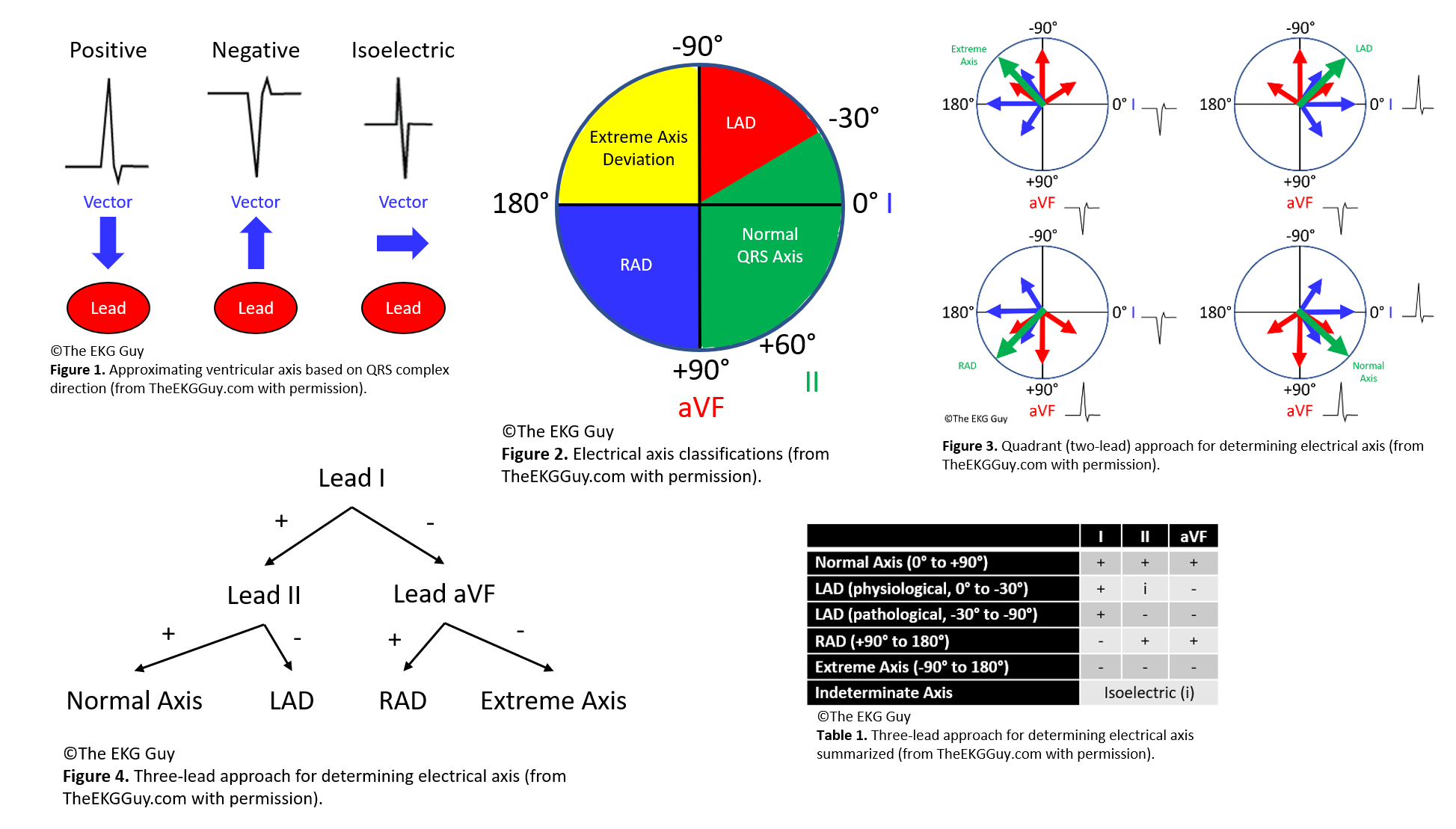