Pulsus alternans is an arterial pulse with alternating strong and weak beats. It is found in the setting of severe ventricular dysfunction and other forms of cardiac pathology. The treatment and clinical outcomes for pulsus alternans vary depending upon the underlying causative etiology, though its presence generally suggests a poor prognostic outlook. This activity reviews the evaluation and treatment of pulsus alternans and highlights the role of the interprofessional team in evaluating and treating patients with this condition.

Another possible etiology for PA is pericardial effusion. Different mechanisms may provoke PA, such as hemodynamic and inotropic impairment.[6][7][8]

The patient population in which pulsus alternans occurs is reflected by the underlying pathophysiology. While pulsus alternans is a relatively rare documented occurrence, it is most commonly associated with left ventricular dysfunction.[2] Therefore, patients with heart failure, cardiomyopathy, or coronary artery disease are at the greatest risk for developing pulsus alternans. Cardiac risk factors may include a previous history of coronary artery disease, congestive heart failure, hypertension, hyperlipidemia, diabetes, peripheral vascular disease, prior stroke, or tobacco use. At the time of this publication, larger epidemiological studies have not been performed.

The exact mechanism of pulsus alternans has never been clearly determined. However, two different mechanisms have been theorized to explain the pathophysiology. The first involves the Frank-Starling curve, where the alternating contractile force is a result of the variation of the end-diastolic volume.[9] The poorly contracting left ventricle has a reduced stroke volume, and this increases the end-diastolic volume for the next contraction.[7] The second mechanism involves diseased cardiac myocytes with abnormal calcium cycling, possibly due to the over-expression of calsequestrin.[2] A previous study demonstrated alterations of the calcium amplitude in conjunction with the force of contraction in right ventricular papillary muscles, thereby strengthening this theory.[10]

A thorough cardiovascular exam should be completed for all patients identified as having pulsus alternans. Given the common underlying etiologies, patients with pulsus alternans will often present with overt signs of decompensated heart failure. This includes elevated jugular venous pressure, bibasilar rales, and peripheral edema. Depending upon the degree of cardiac decompensation, the patient may also be tachycardic, tachypneic, or hypotensive. The presence of an aortic stenosis murmur, S3, or S4, is another exam finding for which one should look. A more specific physical exam finding classically associated with pulsus alternans would be alternating strong and soft pulses of the radial artery.[11]

Pulsus alternans can be identified by palpating the artery, using a sphygmomanometer, and examining arterial and plethysmographic waveforms.[12] Pulsus alternans becomes difficult to assess by the palpatory method when there is a greater than 20 mmHg difference between large and small systolic beats. This difference is best detected by the palpation of the femoral pulses instead of the brachial, radial, or carotid pulses. In order to detect with a sphygmomanometer, the cuff is first inflated higher than peak systolic pressure. It is then gradually deflated while the operator focuses on listening to the first audible systolic beat (first pressure). At this point, only strong pulses are audible. The cuff is then slowly deflated until all systolic beats are audible (second pressure). The severity of pulsus alternans can be assessed by subtracting the first pressure from the second pressure.

As pulsus alternans is a sign of underlying cardiac dysfunction or disease, treatment involves the management of the underlying pathology. Treatment modalities for left ventricular alternans may include diuresis (for left-sided heart failure) or replacement of the aortic valve (for severe aortic stenosis).[16] Both left ventricular alternans, and biventricular alternans have been associated with coronary artery disease, particularly of the left anterior descending coronary artery. Ischemic evaluation should be considered in this patient population. Treatment modalities for right ventricular alternans may include anticoagulation (for pulmonary embolism), pulmonary antihypertensives (for primary pulmonary hypertension), continuous positive airway pressure (CPAP), or bilevel positive airway pressure (BiPAP) used for sleep apnea or obesity hypoventilation syndrome.

Potential complications in the setting of pulsus alternans are varied. Of chief concern are life-threatening cardiac complications, including myocardial infarction and ventricular arrhythmias. While the risk for developing ventricular arrhythmias in the setting of pulsus alternans is unknown, there is theoretically increased risk due to potential changes in cardiac conduction.[7] Other studies have shown an experimental association of pulsus alternans with cardiac arrhythmias and myocardial ischemia.[18] Atrial fibrillation and atrial flutter are other common arrhythmias that may occur in settings of cardiac distress and decompensation. Severe decompensation in the setting of congestive heart failure may also lead to hemodynamic instability, respiratory distress, hypoxia, hepatic congestion, and acute kidney injury.

Management of pulsus alternans secondary to underlying cardiac pathology will require an interprofessional approach. Prompt evaluation with cardiology should be an important component of any initial assessment for pulsus alternans. If the patient has associated respiratory distress, coordination with respiratory therapy will be necessary for the treatment plan. Nursing staff will need to closely monitor the patient’s vitals and perform strict monitoring of the patient’s intake and output. If ischemic heart disease or severe valvulopathy is suspected, consultation with interventional cardiology would also be warranted. If a large pulmonary embolism is identified, coordination with interventional radiology for catheter-directed anticoagulation may be considered. Depending on the degree of cardiac dysfunction, a surveillance echocardiogram may be a consideration. Given the cardiac dysfunction associated with pulsus alternans, a multidisciplinary approach is of great importance to monitor and treat patients with complex cardiac disease. 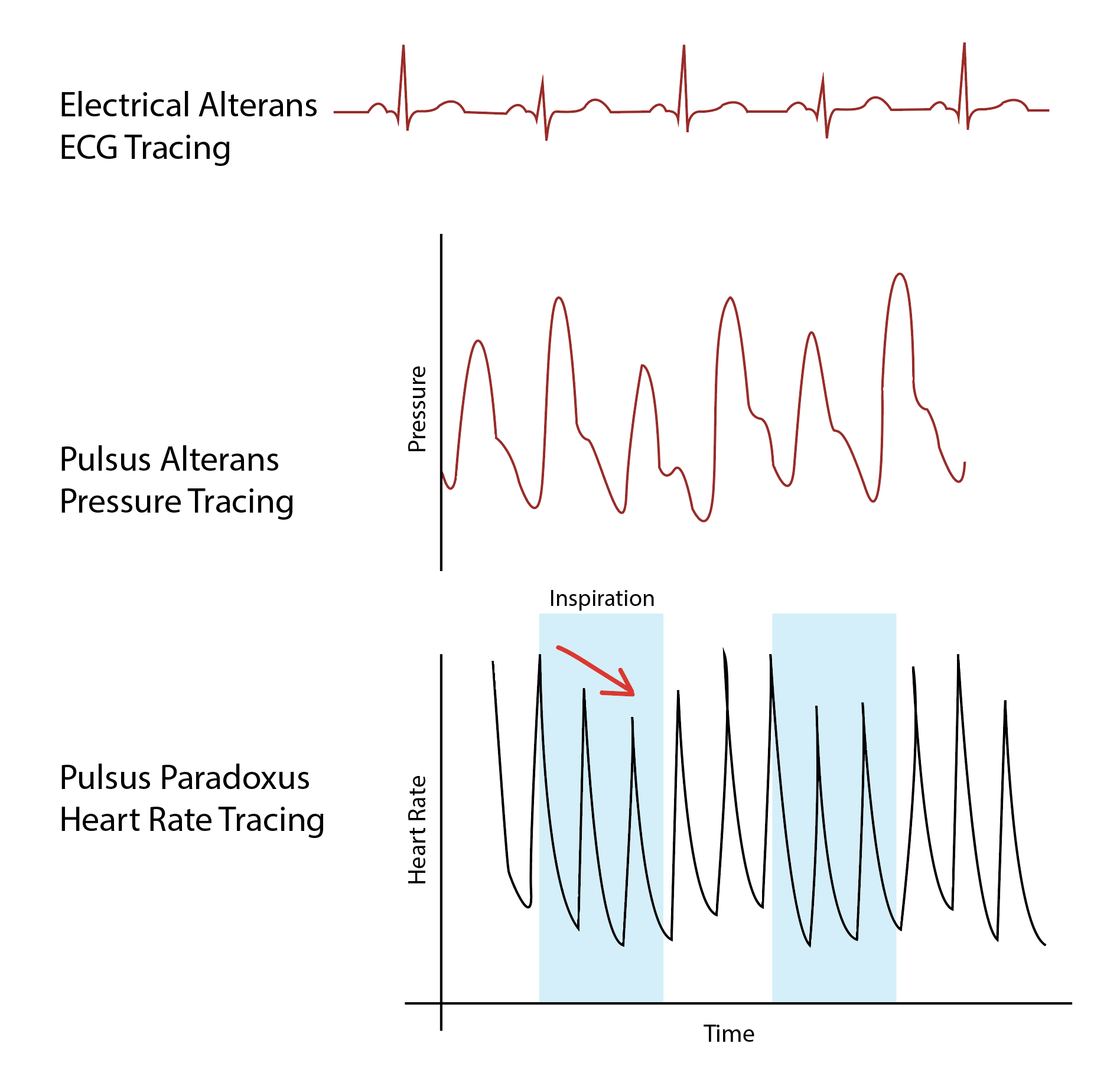