Patients with idiopathic and heritable forms of pulmonary artery hypertension (HPAH) are distinguished by identifying an inheritable genetic mutation; whereas, idiopathic forms have an underlying genetic predisposition to develop pulmonary hypertension. Regardless, both forms have genetic mutations that overlap each disease process. IPAH has correlated with the following genetic mutations: bone morphogenetic protein receptor type 2 (BMPR2), mothers against decapentaplegic, Drosophila, a homolog of 1 and 9 (SMAD 1 and 9), potassium channel subfamily K member 3 (KCNK3), and caveolin 1 (CAV1). While a genetic basis exists in the development of IPAH, there are environmental factors that likely contribute to the pathogenesis. For instance, in a review of 340 patients with idiopathic PAH, it was found that these patients were 10.14 times more likely to have a history of stimulant use (amphetamine, methamphetamine, cocaine) in comparison to patients with pulmonary artery hypertension and a risk factor (familial disease, collagen vascular disease, congenital systemic-to-pulmonic shunts, or use of fenfluramine/dexfenfluramine). Further research is needed to elucidate these findings fully.

The initial insult to the pulmonary arteries in idiopathic pulmonary hypertension is likely a combination of genetic predisposition with environmental influences. With that said, the pathophysiology of the development of pulmonary artery hypertension is the same except for different biomarkers that lead to a cascade of events, ultimately causing vascular remodeling of the vessel wall; this is an important distinction because knowing the underlying cellular mediators help guide targeted therapies. The vascular remodeling process innate to all forms of pulmonary artery hypertension begins with excessive vasoconstriction, which is related to abnormal expression/function of potassium channels. This leads to a decrease in vasodilators (nitric oxide, prostacyclin) and an increase in vasoconstrictors (endothelin-1).

The decreased lumen size of the pulmonary vasculature causes increased right ventricular afterload. In turn, right ventricular dilation results in septal flattening and Doppler notching and ultimately increased pulmonary artery systolic pressure. To estimate the PASP, continuous-wave Doppler will determine the peak tricuspid regurgitant jet velocity (TRV). From here, the modified Bernoulli equation is applied (4v^2) and added to the right atrial pressure to estimate PASP. If PASP is greater than 50 mm Hg, then pulmonary hypertension is very likely, and the patient should obtain a referral for a right heart catheterization.

Initial symptoms include dyspnea, fatigue, chest pain, near syncope/syncope, and lower extremity edema. These vague symptoms likely contribute to causing a delay in diagnosis by an average of 2 years for most patients. Physical exam findings in a typical patient with pulmonary hypertension may include an increased pulmonic component of the second heart sound (P2) (93%), tricuspid regurgitation murmur (40%), pulmonic insufficiency murmur (13%), and peripheral edema (32%).

Electrocardiogram (ECG), chest radiography, and pulmonary function tests may provide important clues to diagnosing pulmonary hypertension, though none of these modalities provide enough sensitivity or specificities to serve as a screening tool. On ECG, right-axis deviation and right ventricular hypertrophy are observable 79% and 87% of the time. Chest radiographic findings of increased pulmonary vascular pressure include attenuated vascular markings and enlargement of the main and hilar pulmonary artery. Patients with idiopathic pulmonary arterial hypertension may have mild reductions in total lung capacity (TLC) and forced vital capacity (FVC). The diffusing capacity of carbon monoxide (DLco) is also significantly less in patients with IPAH. Measurement of oxygen saturation during sleep and exercise must be part of the workup for patients with suspected pulmonary hypertension, as the slightest degree of hypoxia may induce further pulmonary artery vasoconstriction propagating hypertension.

The echo-doppler is the first test to obtain on patients with suspected elevated pulmonary artery pressure. The echo-doppler is useful as a screening tool; however, it is only 50% accurate in estimating PASP. The variability of determining PASP on echo-doppler is due to dynamic changes in volume status of a patient (causing changes in vena cava diameter, therefore different estimates of right atrial pressure), doppler probe positioning, and variability in estimating peak jet velocity. Estimating PASP with Doppler echocardiography to make a diagnosis of pulmonary hypertension should be in conjunction with overall Doppler examination of the heart as some patients may have underestimated PASP yet have right ventricular dilation or dysfunction. The role of exercise echocardiography in identifying or prognosticating patients with PAH remains controversial.

Before initiating therapy, patients with IPAH should undergo vasoreactivity testing to determine if the patient would have a response to calcium channel blockers (CCB). The test involves administrating a vasodilator (nitric oxide, epoprostenol, adenosine) during right heart catheterization and is considered positive if the mean pulmonary artery pressure decreases by 10 mmHg and to a value less than 40 mm Hg. Additionally, the patient’s cardiac output should increase or remain unchanged, and without a drop in systemic blood pressure. These patients may benefit from calcium channel blockers such as dihydropyridine, nifedipine, or diltiazem.

For patients classified as WHO Class II, endothelin-blocking antagonists such as ambrisentan or bosentan in addition to phosphodiesterase type 5 inhibitors sildenafil are recommended (strength A recommendation). For WHO Class III, in addition to ambrisentan or bosentan plus sildenafil, intravenous (IV) epoprostenol or inhaled iloprost can be used (strength A recommendation). Epoprostenol IV and inhaled iloprost are both a prostacyclin analog causing dilation of pulmonary vessels, inhibiting platelet aggregation, and smooth muscle proliferation. If there is an inadequate clinical response, therapeutic alternative for prostacyclin analog, for WHO Class III patients, include subcutaneous treprostinil (strength B recommendation). Tadalafil may also be an option if the patient does not tolerate sildenafil.

For patients classified in WHO Class IV, intravenous epoprostenol is the mainstay therapy. If an inadequate clinical response remains, combination therapy including prostanoids, a phosphodiesterase inhibitor, and endothelin blocking antagonist merits consideration. Further options for end-stage or rapidly progressive IPAH patients include atrial septostomy and/or lung transplant. Other adjunctive therapies to be considered on a case-by-case basis include oxygen and diuretics to maintain euvolemia.

Patients must undergo exercise capacity testing to determine the severity of disease and assess response to treatment. Therefore, before beginning therapy, all patients should have a baseline exercise assessment done. Objective measurement is the 6-minute walk test, which is an independent predictor of mortality and can assess response to therapy. From exercise capacity, a patient’s functional class can be determined as per WHO Functional Classification for Pulmonary Hypertension.

The REVEAL Registry PAH Risk Score Calculator is a tool clinicians may use to help prognosticate patients with pulmonary artery hypertension.

The tool has validation as a predictive algorithm for 1-year survival. Factors that are independently associated with decreased survival include the following:

A rare complication is pulmonary artery dissection, usually diagnosed in post-mortem exams. While rare, it is associated with congenital heart disease and idiopathic pulmonary artery hypertension.

Iatrogenic causes of complications from pulmonary artery hypertension come from line infections in patients being treated with prostacyclin analogs. Administration of this drug must be via a central line, and due to the chronic nature of the disease, the line becomes a nidus for infection.

All patients with idiopathic pulmonary hypertension require supportive therapy, including infection prevention (age-appropriate vaccinations), supervised rehabilitation, and psychological/social support. Female patients of child-bearing age should be counseled on birth control as pregnancy could have detrimental effects on the patient.

The echo-doppler is the first test to obtain on patients with suspected elevated pulmonary artery pressure. If a patient is found to have a mean PAP greater than 25 mm Hg at rest and pulmonary capillary wedge pressure (PCWP) less than 15 mm Hg and peripheral vascular resistance (PVR) greater than 3 Woods units on right heart catheterization, then pulmonary artery hypertension can be diagnosed. All other causes of elevated pulmonary artery pressure must be ruled out to diagnose idiopathic pulmonary artery hypertension. The severity of the disease is measurable by a patient's ability to complete a 6-minute walk test and scaled according to the NYHA Functional Classification. Before initiating therapy, patients with IPAH should undergo vasoreactivity testing to determine if the patient would have a response to calcium channel blockers (CCB). The mainstay treatment for IPAH includes endothelin-blocking antagonists, prostanoids, and phosphodiesterase inhibitors.

Idiopathic pulmonary hypertension is a life-threatening disorder that significantly affects the quality of life and over time leads to right heart failure. A timely evaluation, proper treatment, regular follow up and patient education can positively affect the outcome of the disease. For this, integrated, interprofessional care with the involvement of different subspecialties is required. The physician, along with a team of nurse specialists, pharmacists and, social workers, functioning as an interprofessional team, should coordinate closely to provide the best possible care and counsel these patients.

Non-specific symptoms of the disease usually result in a delay in diagnosis. The family physician suspects the disease based on non-invasive tests (echocardiogram, X-ray). Once the presumptive diagnosis of pulmonary hypertension has been made, it is very critical to classify the type of pulmonary hypertension as the treatment for one group may cause deleterious effects if used for another group. These patients are, therefore, referred to different subspecialty physicians to determine the cause. A referral to the pulmonologist is essential for sleep studies and pulmonary function tests to exclude lung disease as a cause. To rule out left heart disease, patients are referred to a cardiologist. Right heart catheterization to confirm the diagnosis is also done by the cardiologist. Similarly, to rule out other causes the patients are also referred to the rheumatologists, and, other doctors. It is also important to counsel the patients so that they can live with this disease. The pharmacist should examine all current medications, as well as verifying the dosing and interactions of any new medications prescribed for the condition, and report back to the team should any issues arise. 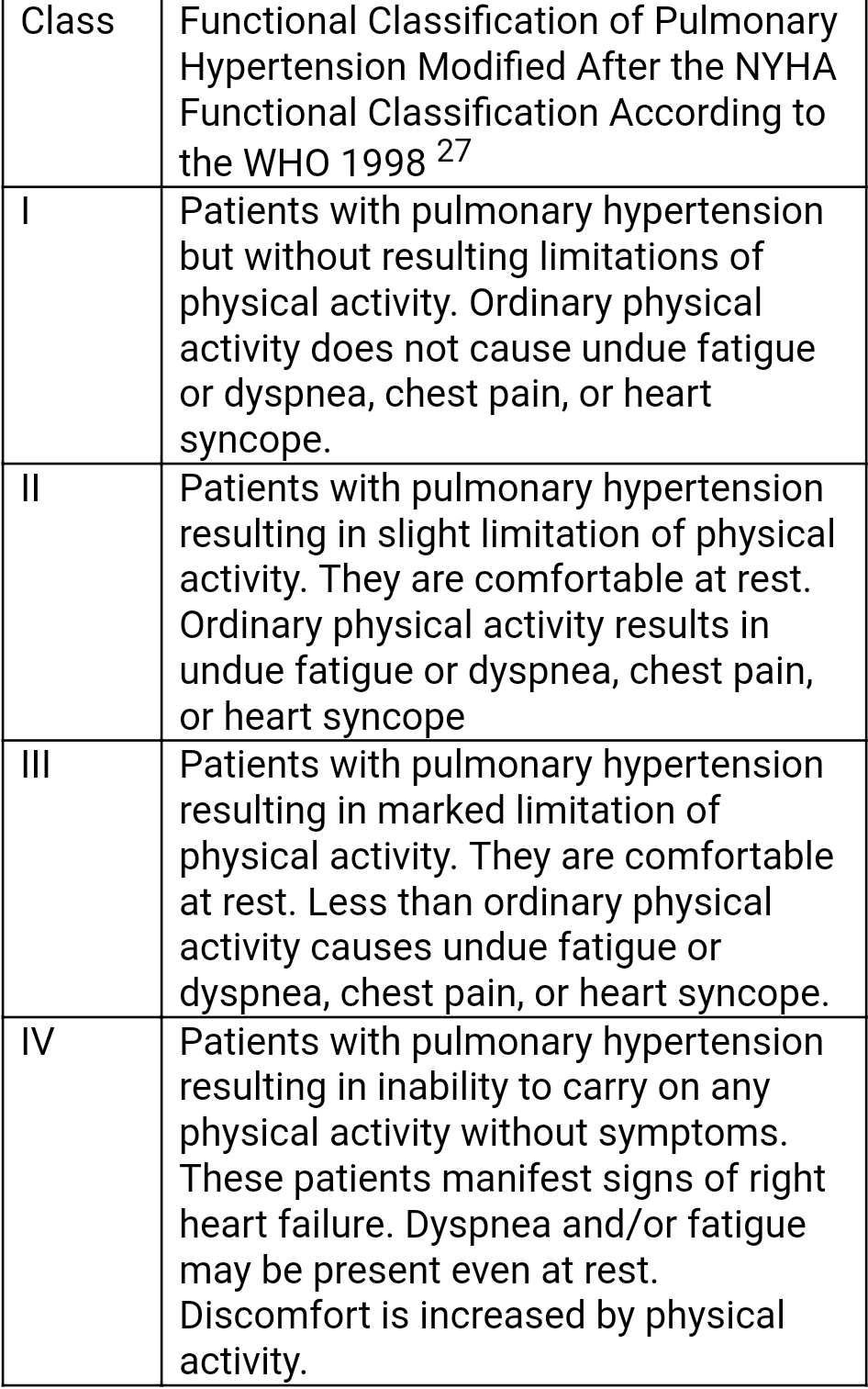 Cohen JL,Nees SN,Valencia GA,Rosenzweig EB,Krishnan US, Sildenafil Use in Children with Pulmonary Hypertension. The Journal of pediatrics. 2019 Feb;     [PubMed PMID: 30396684]