The compliance of a system is defined as the change in volume that occurs per unit change in the pressure of the system. In layman terms, compliance is the ease with which an elastic structure stretches. Compliance is, therefore, basically a measurement of the elastic resistance of a system. Pulmonary compliance (C) is the total compliance of both lungs, measuring the extent to which the lungs will expand (change in volume of lungs) for each unit increase in the trans-pulmonary pressure (when enough time is allowed for the system to reach equilibrium) [1]. It is one of the most important concepts underpinning mechanical ventilation used to manage patient respiration in the operating room (OR) or intensive care unit (ICU) environment. To better understand pulmonary compliance, specific terminologies require a brief review. The following formula is useful to calculate compliance:

Transpulmonary pressure is the pressure gradient between the inside alveolar pressure and outside pleural pressure. It mainly measures the force of lung elasticity at each point of respiration (recoil pressure). Alveolar pressure is the air pressure inside the alveoli. Pleural pressure is the pressure of the fluid present inside the space between the visceral pleura (layer adhered to lungs) and parietal pleura (chest wall lining layer). Normally the total compliance of both lungs in an adult is about 200 ml/ cm H2O. Physicians rely on this concept to understand some pulmonary pathologies and help guide therapy and adjust ventilator pressure and volume settings.

When different readings of the lung volume are taken at specific measured pressure points and then plotted on a diagram, a pressure-volume curve representing both elastic and airway resistance properties of the lung is obtained [3] Figure 1. The two meeting points are end-inspiratory and end-expiratory points, and the line connecting them provides the measurement of dynamic compliance of the lungs. The area falling between this line and both the curves represents the excess work required to overcome the airway resistance during inspiration and expiration. This curve is also called the Hysteresis curve.[4] You can see that the lung is not a perfect elastic structure. The pressure required to inflate the lungs is higher than the pressure necessary to deflate them.

Lung compliance is inversely proportional to elastance. This elastic resistance is both due to the elastic property of lung tissue or parenchyma and the surface elastic force. Any changes occurring to these forces could lead to changes in compliance. Compliance determines 65% of the work of breathing. If the lung has low compliance, it requires more work from breathing muscles to inflate the lungs. In specific pathologies, continuous monitoring of the lung compliance curve is useful to understand the progression of the condition and to decide on therapeutic settings needed for ventilator management.[5]

Elastic Property of the Lung Tissue: These result from the collagen and elastin fibers meshed inside the lung parenchyma. When the lung is outside the body system and in a deflated state, these fibers fully contract due to elasticity. When the lung expands, they elongate and exert even more elastic force, similar to a rubber band. Thus the flexibility of these fibers determines the compliance of the lungs. They could be damaged or affected by specific pulmonary pathologies.

Surface Tension Elastic Force: One of the important concepts affecting lung compliance is the elastic property of the lung contributed to by the surface tension of the alveolar lining.[6] Figure 1 displays the compliance difference between saline-filled and normal air-filled lungs. Air-filled lungs work as a different elastic structure inside the pulmonary system. Its flexible property is not only determined by the elastic forces of the tissue but also contributed to through surface tension exerted by the fluids lining the walls of the alveoli [7]. When water forms a surface with air, the water molecules demonstrate strong, attractive forces for one another, causing contraction of the surface. This principle is what holds a raindrop together.

Surfactant: If you measure the alveolar pressure using surface tension exerted by the lining fluid based on the Laplace law: Pressure = 2 x T (Surface Tension) / R (Radius), one notes that the pressure within the smaller alveoli would be higher than the pressure within large alveoli which will collapse the small alveoli. However, in a typical scenario, this doesn't happen. It occurs where surfactants play a role.[9] A surfactant is a surface-active agent in the fluid, secreted by type II alveolar epithelial cells lining the alveoli. It is a complex molecule containing phospholipid dipalmitoylphosphatidylcholine, surfactant apoproteins, and calcium ions. They reduce the surface tension by partial dissolution. Now returning to the mechanics, the smaller alveoli have a small surface area, which leads to a higher concentration of the surfactants and eventually lower surface tension.[10] Due to its role in surface tension modification, it indirectly affects the compliance of the lung.

Age: This factor minimally influences compliance. Pulmonary compliance increases with age are owing to the structural changes in the lung elastin fibers.[11] 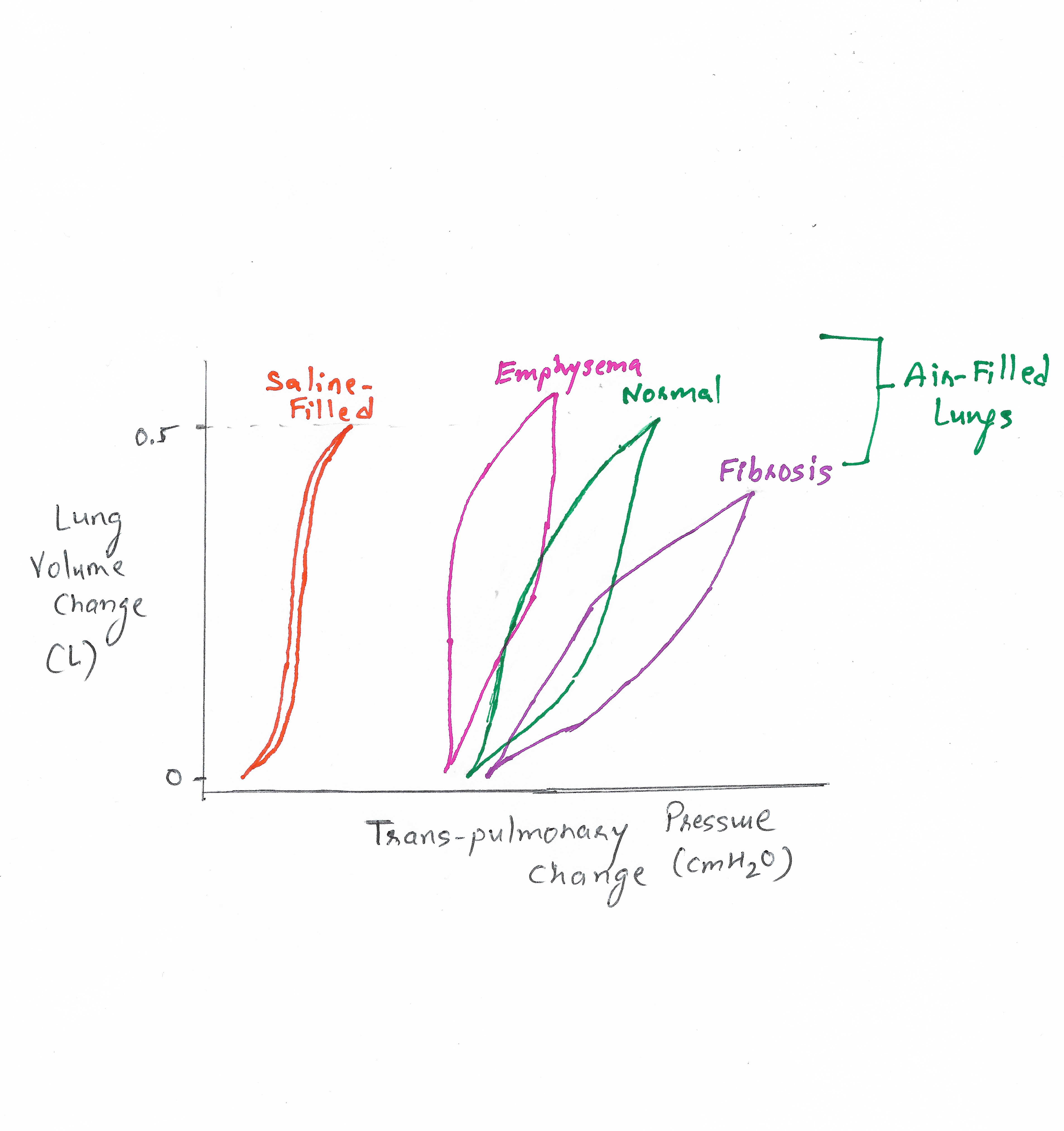 Comparison of lung compliance curves between saline-filled and air-filled lungs. And also among lungs with different pathologies including emphysema and fibrosis. We can see that the pressure required to inflate the saline filled lungs is lesser than the pressure required for normal air filled lungs. This difference is mainly due to the additional surface tension elastic force which is present in the air filled lung due to fluid lining the alveolar epithelium.
Contributed by Dr. Fady Moustarah, MD, MPH and Jay Desai, MBBS

MARSHALL R, The physical properties of the lungs in relation to the subdivisions of lung volume. Clinical science. 1957 Aug     [PubMed PMID: 13473164]

FRY DL,HYATT RE, Pulmonary mechanics. A unified analysis of the relationship between pressure, volume and gasflow in the lungs of normal and diseased human subjects. The American journal of medicine. 1960 Oct;     [PubMed PMID: 13702319]