Plasma cells are differentiated B-lymphocyte white blood cells capable of secreting immunoglobulin, or antibody. These cells play a significant role in the adaptive immune response, namely, being the main cells responsible for humoral immunity. Without their presence, an individual is said to have agammaglobulinemia and is highly susceptible to recurrent infection. Here the hematopoietic lineage, structure, and function of plasma cells are reviewed, along with the clinical presentations arising from improper plasma cell growth and development.

Plasma cells develop from antigen-activated B lymphocytes in secondary lymphoid organs, such as the spleen and lymph nodes, after antigenic stimulation. Blimp-1, IRF4, and XBP-1 transcription factors are known to be essential for the differentiation of mature B cells into plasma cells.[1][2] BLIMP-1 and XBP-1 are often viewed as key regulators of plasma cell differentiation, with Blimp-1 working upstream of XBP-1.[3][4][5][6] Plasma cell differentiation also links to the activation of the unfolded protein response (UPR) signaling pathway.[5][7] UPR activation aids in the plasma cell’s ability to adapt continually to an ever-changing milieu; though the UPR’s function is still under investigation, the belief is that the UPR plays a role in monitoring immunoglobulin concertation and modulating and/or suppressing immunoglobulin secretion.[8]

The most immature blood cell of a plasma cell lineage is the plasmablast. Plasmablasts can proliferate and secrete small amounts of antibodies. The terminally differentiated or mature plasma cells are non-proliferating, are much larger than B cells, and can secrete large amounts of antibodies. During their lifespan of 2 to 3 days, they continuously synthesize and secrete antibodies with specificity for the antigen that stimulated the plasma cell precursor to proliferate and differentiate. Estimates are that a single plasma cell can secrete hundreds to thousands of antibody molecules per second, a remarkable measure of the power of the immune response for combating pathogens. Plasma cells, as antibody factories, are important contributors to humoral immunity.

Though the production and secretion of antibodies were long thought to be the sole functions of plasma cells, recent studies indicate plasma cell involvement in immune response regulation. Within this capacity, research has found plasma cells to inhibit the development of follicular T-helper cells.[9] Mice devoid of plasma cells, via knock-out of the BLIMP-1 gene, expressed elevated levels of follicular T-helper cells, which, in turn, produce IL-21, a protein critical for the processes of affinity maturation, germinal center longevity and function, and B-lymphocyte terminal differentiation.[1][10] The elevated IL-21 resulting from the lack of plasma cells could, therefore, alter germinal center activity along with altered fates and/or levels of B-lymphocytes. In contrast, limited follicular T-helper cells and IL-21 appear to elevate a competitive milieu for active germinal center physiology, resulting in enhanced affinity and maturation of B-lymphocytes. Taken together, these findings propose that an antigen-specific negative feedback loop exists, modulating plasma cell production, thus mitigating unnecessary and potentially pathological excess plasma cell numbers.[9][10]

All plasma cells, albeit normal or malignant, are distinguished by their expression of CD38 and CD138.[11] The former catalyzes the synthesis and hydrolysis of cyclic ADP-ribose, resulting in the maintenance of intracellular calcium levels.[12] In contrast, CD138, also known as syndecan-1, allows the plasma cell to attach to extracellular matrix proteins. Recent research has found that in addition to its role in plasma cell adhesion, CD138 plays a further role in acting as a co-receptor for epithelial growth factor (EGF), particularly in the context of multiple myeloma.[11][12] Though malignant plasma cells express CD38 and CD138 alongside their normal, non-malignant counterparts, a distinguishing characteristic unique to malignant plasma cells is the loss of CD19 expression alongside the possible aberrant expression of CD56, a marker characteristic of natural killer (NK) cells.[11][13] It bears mention, however, that not all myeloma cells express CD56.

An additional noteworthy marker of plasma cells is CD79a. The protein plays a critical role in B-lymphocyte antigen signal transduction and overall B-lymphocyte development and stabilization.[14] Though CD79a is present in the cytoplasm of both precursor B-lymphocytes and mature, differentiated plasma cells, its aberrant loss of expression has been noted in certain samples of plasma cell neoplasms.

Plasma cells vary in size from 14 to 20 micrometers. They are round-to-ovoid cells containing abundant deep blue cytoplasm with a pale perinuclear area corresponding to the Golgi apparatus. They have a round, eccentrically placed nucleus with coarse chromatin arranged in a clock face (art wheel) pattern.[15] Most plasma cells are uninucleate; few are binucleate or multinucleate. They may contain cytoplasmic inclusions called Russell bodies or multiple spherical inclusions packed in their cytoplasm (Mott, grape, or morular cells). Russell bodies and the inclusions of Mott cells are dilated endoplasmic reticulum cisternae containing condensed immunoglobulins.

Electron microscopy reveals that the plasma cells contain an eccentric round nucleus with condensed chromatin and a well-developed nucleolus. The nuclear membrane-associated chromatin gives the nuclei of mature plasma cells a cartwheel appearance in histologic sections. The cytoplasm contains parallel arrays of rough endoplasmic reticulum, cytoplasmic fibrils, and numerous polymorphic mitochondria. The cytoplasm also contains a Golgi complex immediately adjacent to the nucleus. Intracytoplasmic inclusions of various types—elliptical, round, or needle-like crystalline—are present. A significant accumulation of immunoglobulins forms these inclusions.

Deviation from proper plasma cell proliferation can lead to a number of clinical pathologies. These classify as plasma cell neoplasms and plasma cell immunodeficiency.

Plasma cell neoplasms are characteristically an aberrant proliferation of clonal plasma cells producing monoclonal, heavy-chain, class-switched immunoglobulin, referred to as M-protein.[16] Contingent on the amount of excessive proliferation and the presence of associated findings induced by such proliferation, plasma cell neoplasms can classify into several specified pathological states. Determination of the extent of neoplasm involves a complete diagnostic evaluation, which includes the following specific tests and observations: complete CBC with differential; serum protein electrophoresis (to evaluate for M protein); immunofixation (to determine amount and type of immunoglobulin); serum-free light chain analysis; complete skeletal survey (to assess for the presence of lytic lesions); and a bone marrow biopsy (to determine the percentage of clonal plasma cells and potential cytogenetic analysis).[17]

Monoclonal gammopathy of undetermined significance, also known as MGUS, is the least severe manifestation of plasma cell neoplasm. MGUS classifies as a clonal population of plasma cells secreting immunoglobulin, though serum M-protein concentration does not exceed 3 g/dL.[18] Likewise, the clonal plasma cells do not exceed 10% of the bone marrow. Patients are often asymptomatic, and many patients with MGUS do not progress into malignancy.  Research has shown the prevalence of MGUS to affect 1% to 2% of the population in the United States and Europe.[19] Men are more often affected than women, and the incidence increases with age. Further, research has identified a higher prevalence in individuals of African descent.[20]

Immunofixation studies of monoclonal protein indicate that approximately 70% of MGUS cases are IgG, 15% are IgM, 12% are IgA, and 3% are biclonal.[21] Contingent on immunoglobulin type, MGUS is often classified into two main types with distinct potential clinical progression. Patients with IgM MGUS may progress to lymphoplasmacytic lymphoma or Waldenström macroglobulinemia. In contrast, the progression of non-IgM MGUS cases manifests as smoldering myeloma or multiple myeloma.

As plasma cells continue to proliferate aberrantly, an individual may progress beyond the criteria of MGUS; a stage defined clinically as smoldering myeloma. In contrast to MGUS, serum M-protein levels are equal to or greater than 3 g/dL, and clonal plasma cells comprise 10% to 59% of the bone marrow.[18] By definition, a patient with smoldering myeloma does not present with CRAB lesions. CRAB lesions demonstrate calcium elevation, renal inefficacy, anemia, and bone disease (lytic lesion(s)). They are a potential manifestation seen in multiple myeloma, as explained in the following subsection.

The most severe presentation of plasma cell neoplasm is that of multiple myeloma. Though similar to smoldering myeloma in having serum M-protein concentrations of at least 3 g/dL, multiple myeloma criteria require the presence of at least one additional characteristic. Such include the presence of one of more CRAB lesions, bone marrow clonal plasma cells exceeding 60%, a serum-free light chain ratio equal to or greater than 100, and at least one focal lesion detected in MRI.[18]

Amyloidosis is classified as the deposition of immunoglobulin light chain fibrils from clonal plasma cells, often of lambda composition. Such can occur independently or as sequelae of MGUS, smoldering myeloma, or multiple myeloma.[19] Deposition of amyloid fibrils most commonly occurs in the kidney, heart, nervous system, and gastrointestinal system. A positive Congo Red stain confirms the presence of amyloid, manifest by a red/pink color under light microscopy and fluorescing as apple-green birefringence when polarized. Additional plasma cell neoplasms include solitary plasmacytoma of bone and extraosseous plasmacytoma.

Counter to the preceding disorders, characterized by excessive plasma cells or their byproducts, common variable immunodeficiency (CVID) results from a lack of adequate plasma cell numbers. The diagnosis of the disorder is established by reduced levels of IgG, IgA, and/or IgM.[23] Specifically, CVID is noted by an IgG level of < 400 mg/dL. The lack of immunoglobulin results in an increasingly significant susceptibility to bacterial infections. Further, individuals with CVID are prone to several chronic pathologies, including chronic lung disease, inflammatory bowel disease, autoimmune disorders, and lymphoid hyperplasia. As this diagnosis is one that will remain with an individual throughout his or her lifetime, antibody titer to common pathogens (i.e., Haemophilus influenzae, MMR, varicella, and pneumococcus) should have consistent testing.[23] If IgG levels decrease beyond 200 mg/dL, immunoglobulin replacement therapy is the recommendation.

In addition to CVID, over 100 primary immunodeficiencies are attributable to improper B-lymphocyte development and/or function, including improper immunoglobulin production. X-linked agammaglobulinemia (XLA) is characterized by a mutant BTK gene (Bruton’s tyrosine kinase), inhibiting pre-B cell formation.[24] The result is a diminished number of mature B-lymphocytes, including plasma cells, and, therefore, reduced immunoglobulin production and secretion. Given XLA’s inheritance, males are almost exclusively affected. In contrast, selective IgA deficiency (SIGAD), the most common primary immunodeficiency, affects males and females equally.[24] Though the specific mutation associated with SIGAD is not yet fully understood, the disease is known to present in a familial pattern, and the notion of multiple mutations causing SIGAD is under investigation. As implied in the name, patients with selective IgA deficiency lack IgA present in the serum and mucosa; IgM and IgG levels are normal. Therefore, the condition appears to be due to improper isotype switching to IgA and/or improper IgA-secreting B cell maturation.[24] Given the sheer amount of additional primary immunodeficiencies attributable to B-lymphocytes and plasma cells, a continual understanding of these cells’ physiology is crucial for the proper advancement of the health sciences. 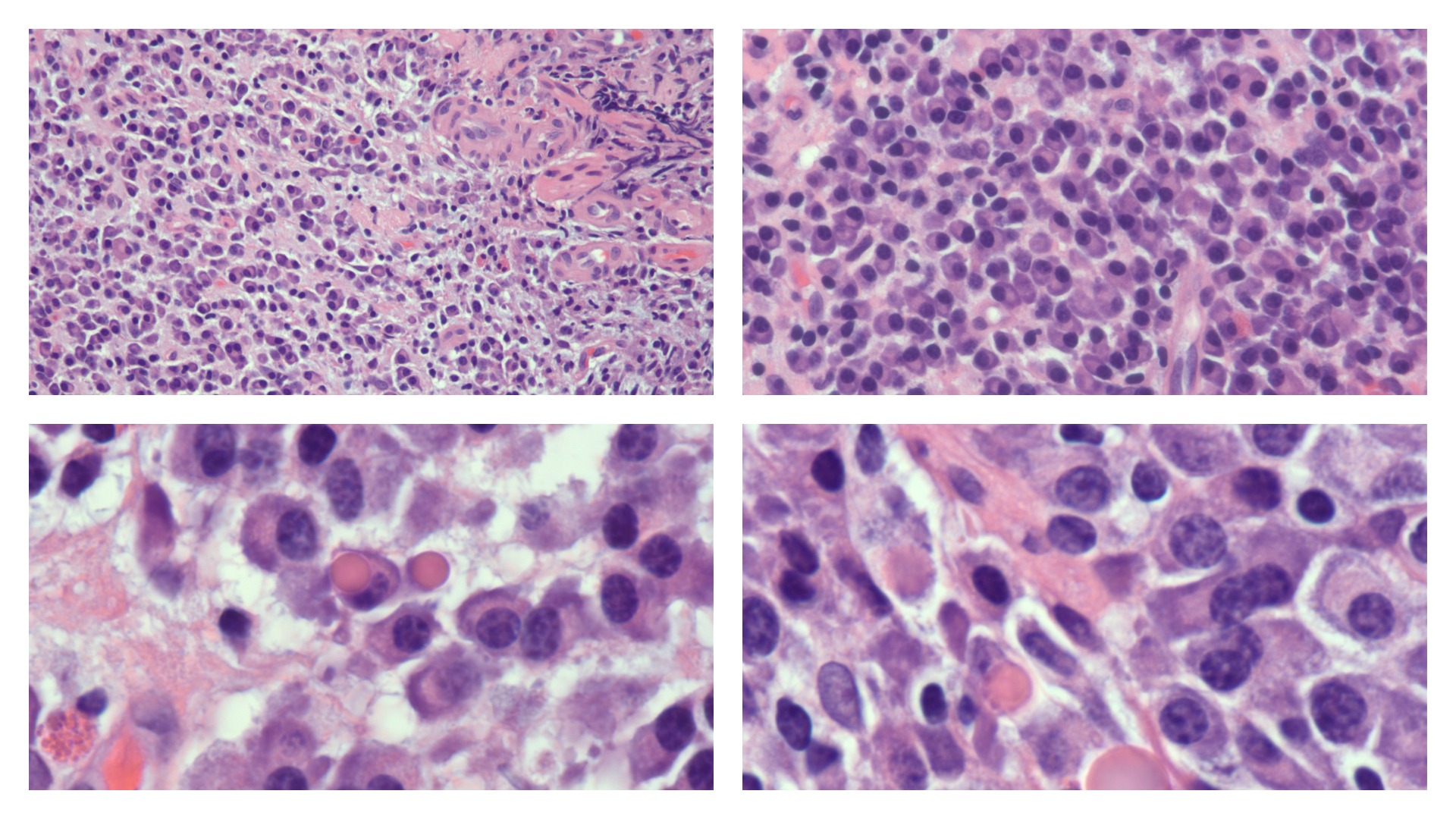