A pelvic fracture involves damage to the hip bones, sacrum, or coccyx - the bony structures forming the pelvic ring. Due to the inherent structural and mechanical integrity of this ring, the pelvis is a highly stable structure. Therefore, fractures of the pelvis occur most commonly in the setting of a high-impact trauma and are often associated with additional fractures or injuries elsewhere in the body. This activity describes how to suspect and diagnose pelvic fractures, how to evaluate them and how to manage them appropriately; it further highlights the role of the interprofessional team in caring for patients with this condition.

Due to the inherent structural and mechanical integrity of the pelvic ring, the pelvis is a highly stable structure. Therefore, fractures of the pelvis occur most commonly in the setting of a high-impact trauma and are often associated with additional fractures or injuries elsewhere in the body. [1][2][3]  Certain types of pelvic fractures do not disrupt the pelvic ring, such as iliac wing fractures, which can typically be managed without operative intervention.  Similarly, fractures of the acetabulum are a frequent occurrence, particularly in the setting of high energy traumas, hip dislocations, and falls in the elderly, and are studied in detail classified by the anatomy of the fracture.

The Young-Burgess classification system is the most commonly utilized classification system in the evaluation of pelvic ring injuries and is expanded upon in detail below. By correctly identifying the pelvic ring injury, trauma surgeons and emergency physicians can provide adequate initial treatment, as well as convey important information about the anatomy of the injured structures to the orthopedic surgeon managing this patient.

Due to the high degree of soft tissue disruption associated with pelvic ring injuries, associated vascular, neurologic, and visceral injuries are common and must be ruled out.  The venous plexus in the posterior pelvis accounts for the majority of hemorrhage associated with pelvic ring injuries.  The corona mortis is an anastomosis between the obturator artery (a branch of the internal iliac artery) and the external iliac artery. Damage to the corona intraoperatively can quickly result in the expiration of the patient due to excessive blood loss within the pelvis.

Although high-impact injuries are more commonly associated with pelvic fractures, they can occur in the setting of a low-impact injury as well. Low impact injuries are seen more frequently in adolescents and elderly - adolescents get pelvic fractures typically as a result of athletic injuries (e.g. avulsion fractures of superior or inferior iliac spines or apophyseal avulsion fracture of the iliac wing or ischial tuberosity), and in the elderly as a result of falls while ambulating (e.g. stable fractures of the pelvic ring or insufficiency fractures of sacrum and anterior pelvic ring).[4][5]

High impact injuries occur most commonly in the setting of motor vehicle accidents (e.g., vehicle collision or pedestrians struck) or fall from a significant height.

The bony pelvis, comprised of the ilium (iliac wings), ischium, and pubis, forms an anatomic ring with the sacrum. Due to the amount of force that is required to fracture this ring, a fracture in one part of the pelvis is frequently accompanied by a fracture or damage to ligaments or structures within or outside of the pelvis.[6][4][7]

In anterior to posterior compression type injuries, ligamentous structures fail from an anterior to posterior direction. First, there is damage to the symphyseal ligaments at the pubic symphysis. This is followed by disruption of the ligaments of the pelvic floor, that is the sacrospinous and sacrotuberous ligaments.  And finally, there is disruption of the posterior sacroiliac complex. The progression of this injury pattern divides APC type pelvic ring injuries into 3 types:

Vertical shear injuries are a result of an axial load to one hemipelvis. These injuries are more commonly seen with falls from height or motorcycle collisions where one leg is more likely to be forcefully loaded compared to the other.  The iliac wing is driven up relative to the sacrum, with disruption of the symphyseal ligaments, pelvic floor, and the strong posterior sacroiliac complex.[8]

Injuries to the pelvis signify a high energy mechanism of injury, and therefore a thorough trauma evaluation is needed. All patients should undergo routine assessment as described by the American College of Surgeons (e.g., as per the Advanced Trauma Life Support protocol) which includes evaluation for any potentially life-threatening injuries, whether related to the hip or not.

Pelvic ring fractures are commonly associated with injuries to the axial or appendicular spine. Therefore, the spine and extremities should also be examined assessing for limb length discrepancies and obvious angular or rotational deformities. Neurovascular structures crossing the pelvis may also be involved with injuries to the pelvis, and a thorough initial neurological examination is critical for appropriate management and monitoring.

Medical practitioners should carefully monitor the hemodynamic status of patients with pelvic fractures, as there is frequently concomitant blood loss, even in closed fractures. Intraabdominal bleeding is present in up to 40% of cases, but there also may be intrathoracic, retroperitoneal, or compartmental bleeding in such injuries. Within the pelvis, bleeding is usually caused by shearing of the venous plexus and can lead to hematomas holding up to 4L of blood.  Posterior pelvic fractures may also result in an arterial injury to the superior gluteal artery, which constitutes a surgical emergency.

Assessment of soft-tissue injuries may provide further insight into the degree of impact sustained by the patient.  It is particularly important to assess for any lacerations of the perineum (e.g., rectum or vagina) as this would indicate a severe injury and fractures potentially contaminated by urine, stool, or other environmental contaminants.

Neurologic injuries associated with pelvic fractures typically involve the L5 or S1 nerve roots.  If there is a sacral fracture involved, this may also include an S2-S5 sacral nerve root injury which could result in bowel or bladder incontinence and sexual dysfunction.

Computed tomography (CT) scans of the abdomen/pelvis will provide the best visualization of pelvic anatomy and allow for evaluation of any pelvic, retroperitoneal, or intraperitoneal bleeding. A CT scan will also allow for confirmation of hip dislocation and help determine whether or not there is an associated acetabular fracture. [13][14][15]

The best screening test for a pelvic fracture however is an anteroposterior (AP) pelvic radiograph - this will reveal 90% of pelvic injuries.  Although most trauma patients undergo routine CT scans to the abdomen and pelvis, AP pelvic radiographs should be considered as a rapid diagnostic tool for hemodynamically unstable patients to allow for earlier intervention.

The pelvis should also be examined as part of the Focus Assessment with Sonography for Trauma (FAST) examination - this may help identify intraperitoneal bleeding and potentially pinpoint a source of shock if it is present.

Retrograde urethrography may also be performed in patients suspected of having a urethral tear (e.g., males presenting with blood at the urethral meatus or females who, after careful attempts, are unable to have a Foley catheter inserted, or have a vaginal tear or palpable fragments adjacent to the urethra).

Individuals presenting with hematuria in the setting of an intact urethra (e.g., suspected of having a urinary bladder injury) should undergo a cystography.

Pelvic Angiography may be performed if a patient is experiencing persistent hemorrhage despite adequate intravenous fluid resuscitation and pelvic stabilization - this may detect occult or obvious injuries and allow for embolization of any damaged arteries in addition to helping visualize before manipulative reduction.

In the acute setting, any additional life-threatening injuries should be addressed as the amount of force needed to result in a pelvic fracture often causes other significant injuries. The primary goal in the acute setting is to provide early stable fixation as it has been associated with decreased blood transfusion, systemic complications, hospital stay, and overall improved survival.  Excessive movement of the pelvis should be avoided. Large-bore intravenous access for administration of analgesics and fluids should be obtained as soon as possible, and vital signs should be monitored closely. [16][17][18]

Mechanical stabilization with an external compression device such as a pelvic binder or sheet centered over the greater trochanter can help to stabilize the pelvic ring as well as help staunch internal bleeding from the venous plexus in APC type pelvic ring injuries but should be avoided in lateral compression (LC) type pelvic ring injuries with an internal rotation component. Conversely, skeletal traction is the appropriate stabilization for a vertical shear pelvic ring injury. If appropriate, the patient can be taken for skeletal external fixation of the pelvis, which will provide the best stability in hemodynamically unstable patients, and generally can be performed in conjunction with an emergent laparotomy.

Modern improvements in pelvic implants, anesthetic techniques, intraoperative imaging, coordinated care in polytrauma along with a more advanced understanding of injury patterns have resulted in a shift towards the more operative management of pelvic fractures that were once previously treated nonoperatively.  This has shown improved clinical outcomes as a result of the prevention and repair of any significant pelvic defects and earlier mobilization of patients.

Nonsurgical treatments of pelvic fractures are appropriate for some pelvic ring injuries. APC Type I and LC Type I fractures can remain weight-bearing as tolerated, with early mobilization encouraged. Minimally displaced pelvic fractures can often be treated non-operatively but must be evaluated on a case by case basis.

"Pelvic fractures" generally refer to fractures of the pelvic ring but may encompass several other fracture types, including acetabulum fractures and iliac wing fractures, the latter of which can generally be managed non-operatively.

Patients report a significantly lower quality of life both mentally and physically two years after treatment for pelvic injuries, even when good radiographic healing is present.[20] Pelvic fractures are highly associated with concomitant injuries, and therefore it is difficult to attribute the cause of lower quality of life to pelvic ring injuries compared to the other associated injuries and resultant disability. Patients with concomitant orthopedic injuries in particular suffered worse disability and significantly worse psychological, social, and occupational outcomes.[20]

Patients with pelvic ring injuries commonly suffer from deficits long after their injury. 56% of women report dyspareunia, with symphyseal displacement of 5 mm or more being associated with increased pain during intercourse.[21] Furthermore, women with a history of pelvic ring injury are more likely to require a cesarean section than others.[22] Men also suffer sexual side effects, with up to 61% of patients reporting some level of sexual dysfunction and 19% with erectile dysfunction, with rates going up when considering only APC type injuries up to 90%.[23][24] There is no evidence that fixation of unstable pelvis fractures decreases the incidence of sexual dysfunction or neurological injury that occurs from the trauma.

Patients with pelvic ring injuries should be counseled on the long-term sequelae associated with pelvic ring injuries, especially in the presence of concomitant injuries. Many patients suffer permanent disability, which can take a financial, mental, and physical toll on the patient. The support of a full interdisciplinary team is necessary to help patients rehab and address their disabilities appropriately.

Therapists are crucial in the post-operative care of pelvic ring injuries in assisting patients to return to normalcy as much as possible. A pharmacist should be involved to regulate and assist with pain relief. Pelvic fractures can result in a number of complications as outlined above and may warrant intervention by medical subspecialties such as urologists for bladder and sexual dysfunction, as well as by mental health professionals to address the serious psychosocial issues that arise from such an injury.[25][26] (Level II) 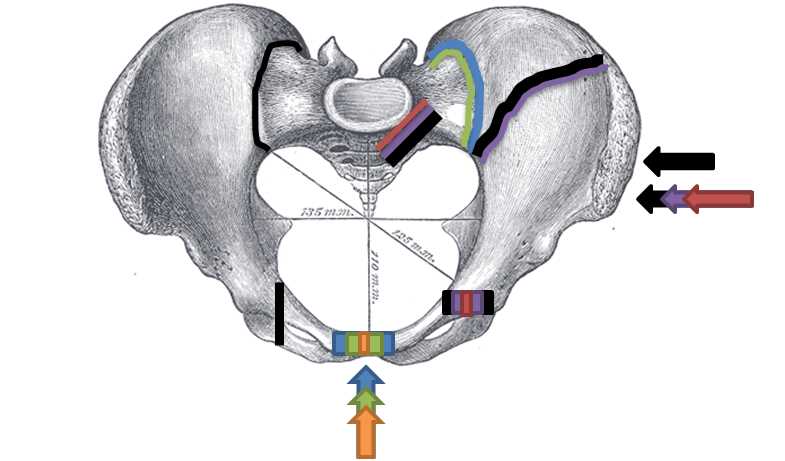 Rodrigues IFDC, To log-roll or not to log-roll - That is the question! A review of the use of the log-roll for patients with pelvic fractures. International journal of orthopaedic and trauma nursing. 2017 Nov     [PubMed PMID: 28797555]