The thoracic wall is made up of five muscles: the external intercostal muscles, internal intercostal muscles, innermost intercostal muscles, subcostalis, and transversus thoracis. These muscles are primarily responsible for changing the volume of the thoracic cavity during respiration. Other muscles that do not make up the thoracic wall, but attach to it include the pectoralis major and minor, subclavius, and serratus anterior (anteriorly) and the primary costarum and serratus posterior superior and inferior (posteriorly). The muscles of the anterior thorax provide movements to the arm and shoulder while the muscles of the posterior thorax also help change thoracic volume during breathing and reinforce the thoracic wall. The diaphragm is another muscle in the thorax that serves as the main muscle of inspiration. It also makes up the floor of the thorax, thus separating the contents of the chest from those of the abdomen. Other minor accessory muscles that attach to the thorax include the scalene muscles and the sternocleidomastoid muscle, both of which may also minimally aid in respiratory efforts.

In addition to the intercostal muscles, the subcostalis and the transversus thoracis also make up the thoracic wall. The subcostalis exists in the same layer as the innermost intercostal muscle and is present in abundance in the lower regions of the posterior thoracic wall. They originate from the internal aspect of one of the lower ribs and insert onto the internal aspect of the second or third rib below. The transversus thoracis also appears in the same space at the innermost intercostal muscle. They originate from the lower posterior sternum, spread across the inner surface of the thoracic cage, and inserts onto ribs 2 through 6. Both of these muscles aid in depressing the ribs during forced expiration.[2]

Muscles of the posterior thorax, such as the levatores costarum and serratus posterior superior and inferior, may also aid in respiration. The levatores costarum originates from the transverse processes of C7 to T11 and inserts onto the rib below. It minimally aids in inspiration via rib elevation. The serratus posterior superior attaches to ribs 2 through 5 and elevates them during inspiration whereas the serratus posterior inferior attaches the vertebrae to ribs 8 through 12 and depresses them during forced expiration.[2] These muscles, in conjunction with the muscles of the thoracic wall, help alter the thoracic volume during respiration and altogether reinforce the thoracic wall.

The major muscle of inspiration, however, comes from the diaphragm. The diaphragm is attached peripherally to the xiphoid process (sternal portion), the costal margin of the thoracic wall and lower sixth ribs (costal portion), and the lumbar vertebrae (lumbar part). During inspiration, the muscle contracts and pulls down its central tendon inferiorly, thus flattening the diaphragm - this action increases the vertical diameter of the thorax and increases the negative thoracic pressure, which ultimately draws air into the thoracic cavity. During expiration, the diaphragm relaxes and elevates, forcing the air with the lungs to be expelled from the body. Other accessory muscles that aid inspiration include the scalene muscles (helps elevate the first and second ribs) and sternocleidomastoid muscle (assists in raising the sternum). Besides respiration, the diaphragm also functions to aid abdominal straining and increase intra-abdominal pressure upon contraction during times of micturition, defecation, and even weightlifting.[2][3]

Other muscles of the thorax are involved in upper limb movement, which include the pectoralis major and minor, subclavius, and serratus anterior muscles. The pectoralis major originates from the medial half of the clavicle, anterior sternum, first seven costal cartilages, and aponeurosis of the external oblique and inserts on the lateral lip intertubercular sulcus of the humerus. It functions to flex, adduct, and medially rotate the arm at the glenohumeral joint. Its clavicular head causes flexion of the extended arm while its sternoclavicular head causes extension of the flexed arm.[4] The pectoralis minor muscle originates from the anterior surfaces of ribs 3 to 5 and the deep fascia overlying the related intercostal spaces and inserts on the coracoid process of the scapula. It functions mainly to depress the tip of the shoulder and protract the scapula. It may also assist respiratory efforts as an accessory muscle by lifting the third, fourth, and fifth ribs during inspiration.[2] The subclavius muscle originates at the costochondral junction of the first rib and inserts at the subclavian groove of the clavicle. It functions to stabilize the clavicle.[5]

The serratus anterior muscle originates on the superolateral surfaces of the first to eighth ribs or the first to ninth ribs at the lateral wall of the thorax and inserts along the superior angle, medial border, and inferior angle of the scapula. It mainly functions to protract the scapula as seen in punching, hence its colloquial nickname as the "boxer's muscle," thus facilitating scapular rotation. The serratus anterior may also assist in inspiratory efforts by elevating the ribs when the shoulder girdle is in a fixed position.[6]

Skeletal muscle develops from the differentiation of mesoderm. During the fourth to eighth weeks of human development, paraxial mesoderm organizes itself into clusters alongside the neural tube to form somites. These somites then differentiate into two sets of cells: the dorsolateral dermomyotome and the ventromedial sclerotome. The dermomyotome goes on to form the skeletal muscle, including the muscles of the thorax, and the dermis of the skin while the sclerotome forms the axial skeleton.[1][4]

Last, the diaphragm is supplied by multiple arteries that include the musculophrenic artery branch of the internal thoracic artery, superior phrenic artery branch of the aorta, lower five intercostal arteries and subcostal artery, and the inferior phrenic artery.[3] Similar to its level of blood supply, there is also an abundant supply of lymph nodes that drain the diaphragm towards the mediastinal lymph node centers connecting to the bloodstream via the thoracic duct.[7]

The muscles of the thorax discussed in this article include the following:

Multiple studies have reported the existence of anatomical variations of the muscles of the thorax either in the case of supernumerary muscles or congenital anomalies. The sternalis muscle is a rare supernumerary muscle variant of the anterior thoracic wall found in 8% of the population that lies vertically between the superficial fascia and the pectoral fascia, parallel to the right sternal margin. It measures at approximately 7.0 cm in length and 2.9 cm in width.[9] The sternalis muscle may present either unilaterally (4.5%) or bilaterally (less than 1.7%) and is thought to participate in shoulder joint movement or play an accessory role in lower chest wall elevation. There is still much disagreement about its innervation and embryological origin. Some reports have found that the muscle receives its innervation either from the external or internal thoracic nerves (55%), the intercostal nerves (43%), or both (2%). Moreover, some studies have postulated that it is a derivative of the hypaxial myotomes or the dermomyotomes from which the ventral and lateral body wall muscles of thorax and abdomen develope. Meanwhile, other studies endorse that the muscle develops either from the rectus abdominis sheath or from the pectoralis major as a result of a defect in the muscle patterning.

Cases have never reported any clinical symptoms related to the sternalis muscle; however, its existence may present alterations in the electrocardiogram or cause misdiagnoses of breast masses (e.g., breast carcinoma or hematoma) on routine mammography due to its parasternal location and relative unfamiliarity among radiologists. It has the potential to interfere with and prolong breast and cardiothoracic surgeries if undetected preoperatively. If it is detected preoperatively, surgeons can use the sternalis muscle as a muscular flap in reconstructive surgeries of the anterior chest wall, head and neck, and breast.[10][11]

Surgical interventions that involve the thorax muscles typically involve chest tube placement and needle therapy for either decompression or anesthesia.[1][2]

Respiratory muscles have obvious implications for sustaining life and performing daily activities. The use of accessory muscles to aid respiratory efforts can be a normal finding during times of strenuous activity requiring high physiologic demand such as exercise or even singing. However, their presence in patients at rest may suggest a pathological cause such as asthma attack, which requires further evaluation, medical management, and treatment. Examples of accessory respiratory muscles include scalene muscles, sternocleidomastoid muscles, internal intercostals, transversus thoracis, pectoralis major and minor muscles, serratus anterior, serratus posterior superior and inferior, latissimus dorsi, trapezius, and the muscles of the abdomen.[2] 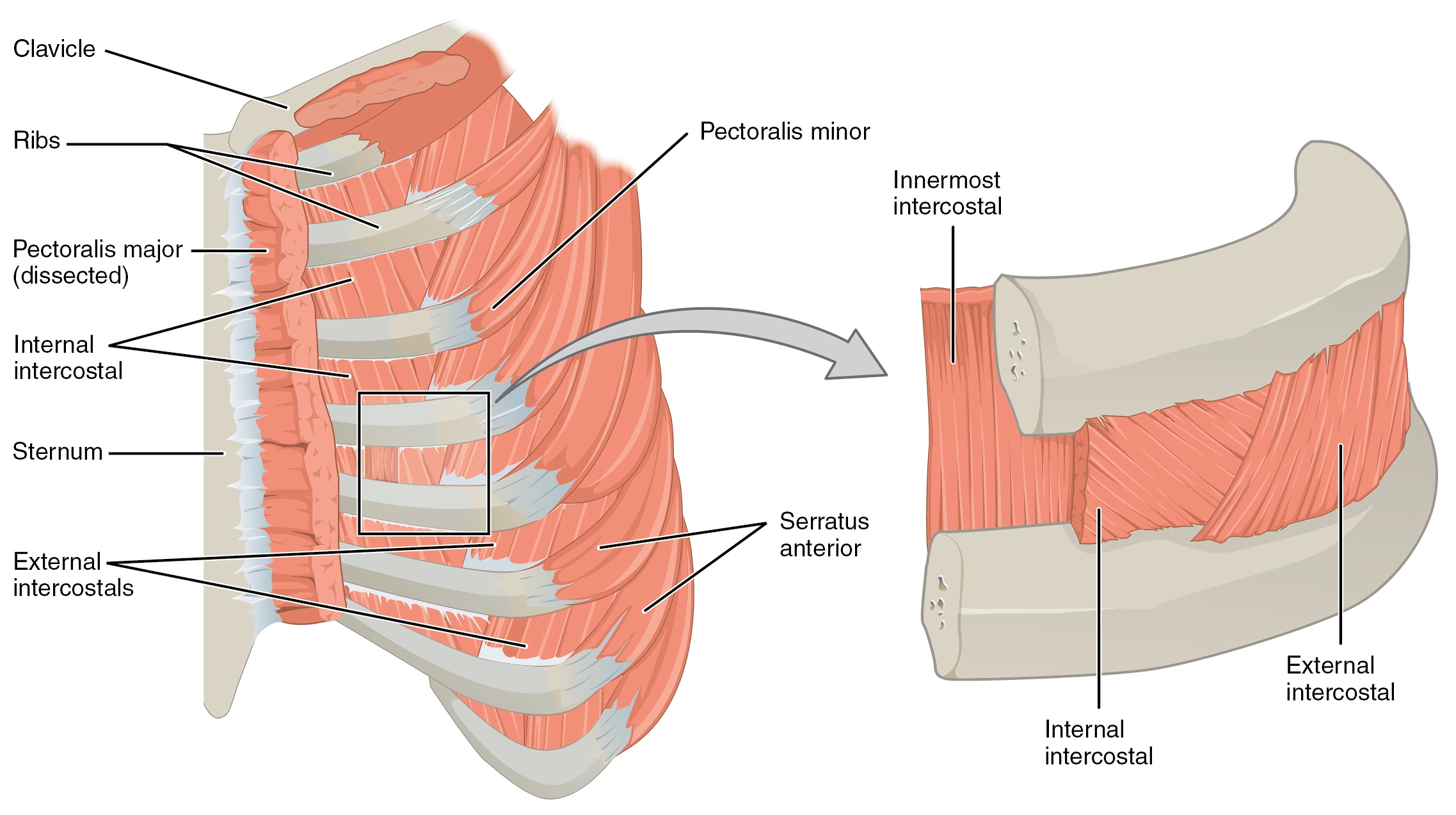