Pearly penile papules, also known as papillomatosis corona penis, corona capillitii, hirsuties coronae glandis, papillae coronis glandis, and hirsutoid papillomas, are benign lesions of the penis. This activity describes the presentation, evaluation, and management of pearly penile papules and highlights the role of the interprofessional team in the care of affected individuals.

The prevalence of penile pearly papules is diversely appreciated and ranges from 14% to 48% of males. They are rarely observed in children and mainly seen in late adolescence and early adulthood. Their prevalence declines in older patients as the lesions involute with aging. Similar papules have never been described on female genitalia.

Many studies show that pearly penile papules are less common in circumcised males and is they are supposed to be secondary to chronic trauma undergone by uncovered corona which leads to the papule involution. However, Rehbein, in his study of 840 males, showed a higher prevalence among circumcised people. A recent study in young circumcised men showed a prevalence of 17.1%.[6][1]

Although many studies have shown no race predilection to develop pearly penile papules, Rehbein reported them to be more prevalent in African American males.[7]

The exact role of pearly penile papules is not clear to date. They might be vestigial of penile snipes, which are seen in primates and other mammals and may promote sexual pleasure.

Although pearly penile papules are usually asymptomatic, they are often mistaken by males who carry them for genital warts, thus causing concerns of having a sexually transmitted infection. This fear of infection may cause tense couple relationships, as it raises questions about fidelity within the couple. One study from Singapore showed that approximately one in seven men, who were examined in a sexually transmitted infection clinic, had only pearly penile papules and no infection.

The level of patient concern appears to be related to the size of the papules. According to a study, two-thirds of males with moderate-to-large pearly penile papules have concerns about their lesions, while one-third of those with less-noticeable papules are worried.

Penile pearly papules are flesh-colored or white, dome-shaped or filiform papules. Their size ranges from 1 mm to 4 mm. Pearly penile papules are arranged in rows around the corona of the glans penis, mainly on its dorsal aspect. There can be one row or many rows. The papules may encircle the entire glans and even have ectopic locations on the penile shaft.

Molluscum contagiosum may be located on the penis as a sexually transmitted infection. However, these lesions have a larger size and are umbilicated in their center. They rarely have an exclusive location on the corona of the glans.

Sebaceous hyperplasia is usually seen on the face, but rare cases of penile location were reported. Lesions usually occur on the ventral aspect of the penile shaft and are white to yellow papules.

In the case of diagnostic difficulty, dermoscopy and histopathology are helpful tools.

On dermoscopic examination, penile pearly papules are arranged according to a grape-like or a cobblestone pattern. They exhibit a white or pink color, with central comma-like, hairpin, or dotted vessels. Such a vascular pattern is not specific, as it may be observed in genital warts. However, pearly penile papules, unlike genital warts, do not show desquamation which manifests as an irregular reflection.

Because of the benign nature of pearly penile papules, as well as their possible resolution with age, treatment is not indicated. However, some patients feel distressed or have important cosmetic concerns. Furthermore, about a half of males who are reassured of the benign nature of their pearly penile papules want to remove them. Some of them may use inappropriately over-the-counter topicals for common warts, which may cause injuries and scarring.

Studies having assessed cryotherapy are scarce. Two sessions of liquid nitrogen induced good cosmetic results with no pigmentation in a few patients.

Practitioners may also use ablative lasers. Carbon dioxide laser vaporization leads to complete removal of pearly penile papules. This procedure is painful and requires local anesthesia. The vascularization of the penis may cause bleeding during laser sessions but also makes the reepithelialization faster, so that wound healing is achieved within a week. The post-procedure wound management may be inconvenient for patients. Furthermore, there is a risk of scarring and/or pigmentary changes.

Unlike continuous-wave and pulsed modes, fractionated carbon dioxide laser causes less tissue damage with fewer adverse effects, but it may require more than one treatment to achieve acceptable cosmetic results.

One to six sessions of ablative 2940 nm erbium YAG laser cleared pearly penile papules in 45 males. Wounds healed within two weeks. No recurrence, no scarring, and no residual pigmentation were noted at the one-year follow-up.

Fractional nonablative 1550 nm erbium laser is less painful than ablative devices and produces only microscopic skin damage which heals rapidly. Up to five treatment sessions were reported to be necessary to obtain a good cosmetic result.

Pulsed dye laser may be indicated in pearly penile papules treatment, as it is reported to give good aesthetic results, with a few side effects after one to three sessions.

Pearly penile papules are benign lesions, and they undergo no malignant transformation. Practitioners usually need to reassure worried males of the papules non-infectious nature. Physical treatments such as cryotherapy and laser should only be indicated in patients with significant psychological discomfort.

Pearly papules on the penis are best managed by an interprofessional team that includes nurses and pharmacists.

Because of the benign nature of pearly penile papules, as well as their possible resolution with age, treatment is not indicated. However, some patients feel distressed or have important cosmetic concerns. Furthermore, about half of males who are reassured of the benign nature of their pearly penile papules want to remove them. Some of them may use inappropriately over-the-counter topicals for common warts, which may cause injuries and scarring. Clinicians should educate patients that most treatments are likely to cause more harm than good. If patients persist, a urology consult should be sought for treatment options. 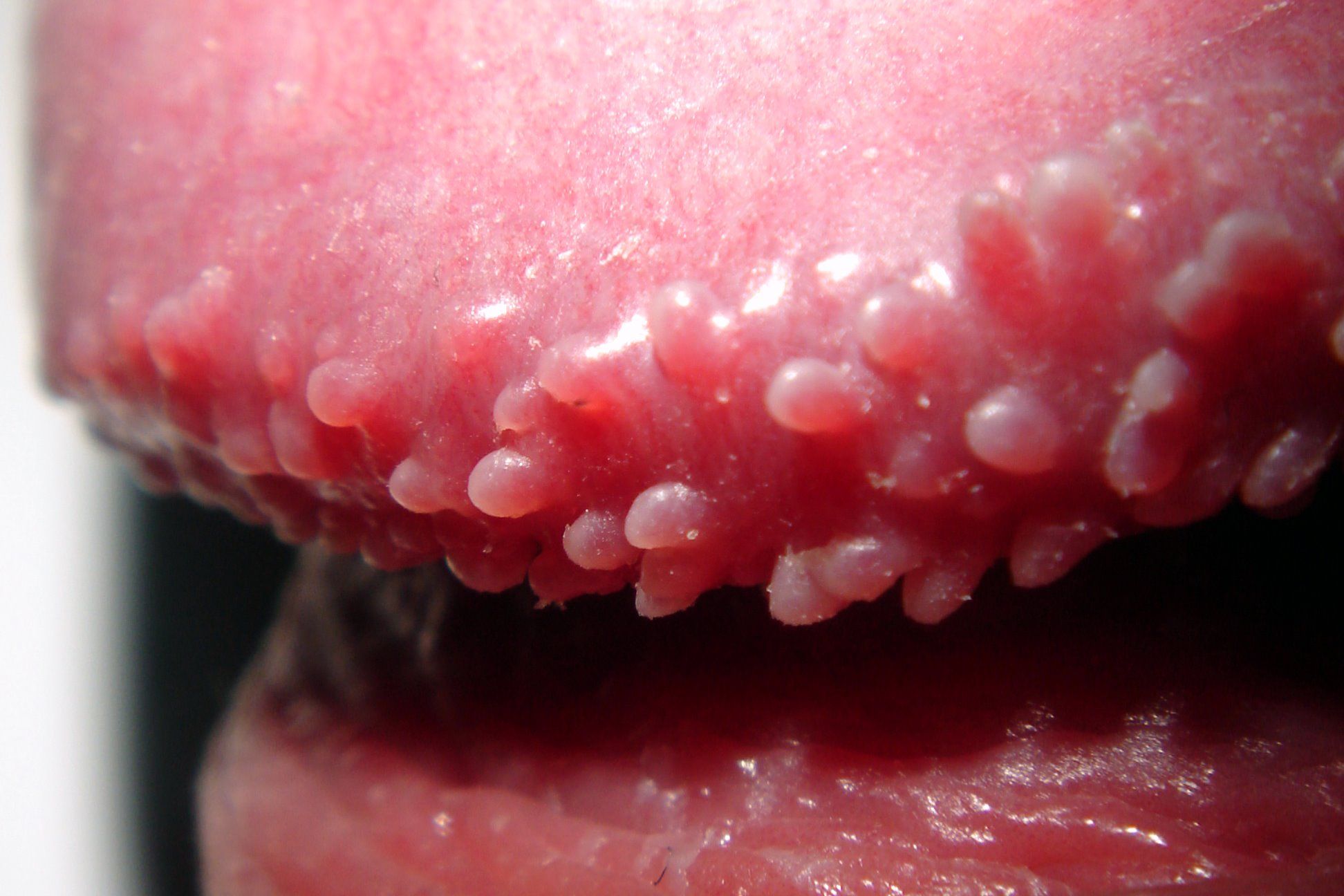