Patent foramen ovale (PFO) occurs when a remnant of normal fetal anatomy abnormally persists into adulthood. It represents a benign finding in the newborn periods. If PFO persists into adulthood, it usually leads to right-to-left shunting of deoxygenated blood, which can be symptomatic or asymptomatic. Additionally, if a PFO is present and venous thromboembolism (VTE) develops, the PFO can lead to shunting of the VTE into the arterial circulation. This activity will help clinicians recognize when to consider patent foramen ovale on differential diagnosis, how to manage it, and highlight the interprofessional care team's critical role in caring for patients with patent foramen ovale.

Patent foramen ovale (PFO), is part of a group of entities known as atrial septal defects, is a remnant of normal fetal anatomy. More than half of infants will have PFO at six months of age. [1] Although it's doesn't have a major clinical effect in neonates, it may persist into adulthood. The majority of adult patients with a PFO are asymptomatic; however, in some adults, PFO may result in an inter-atrial, right-to-left shunting of deoxygenated blood and potential for shunting venous thromboembolism to the arterial circulation. These changes explain the pathophysiologic determinant of several conditions associated with PFO, including cryptogenic (having no other identifiable cause) stroke, decompression sickness, migraine, platypnea-orthodeoxia syndrome, and acute limb ischemia secondary to emboli.[2]

The foramen ovale is a tunnel-like space between the overlying septum secundum and septum primum. It closes in 75% of infants when the septum primum and secundum fuse. In utero, the foramen ovale is necessary for the flow of blood across the fetal atrial septum. Oxygenated blood from the placenta returns to the inferior vena cava, crosses the foramen ovale, and enters the systemic circulation. In approximately 25% of people, a PFO persists into adulthood. PFOs may be found in association with:

Data in 1988 revealed that 30% to 40% of young patients who had a Cryptogenic stoke had a PFO. This percentage compared to 25% in the general population. [4] Since that time, the largest target population studied has been patients of all ages with cryptogenic stroke, in whom the frequency of finding a PFO is often double that of the general population. In adults with PFO, an optimal secondary prevention strategy is not well defined. Patients with PFO and atrial septal aneurysm who have experienced strokes seem to be at higher risk for recurrent stroke (as high as 15% per year), and secondary preventive strategies are necessary. In another study, 50% of patients with cryptogenic stroke were found to have right-to-left shunting compared to 15% of the controls. Approximately 2/3rds of divers with undeserved (following safe dive profiles) decompression illness are found to have a PFO. [5]

PFO is a flap-like opening between the atrial septum secundum and primum at the fossa ovalis. In utero, it serves as a conduit for blood to the systemic circulation. Once the pulmonary circulation increases after birth, the functional PFO starts to close. Anatomical closure of the PFO usually occurs at about 12 months. PFO primarily increases the risk of stroke from a paradoxical embolism. The risk for a cryptogenic stroke in patients with PFO increases with the larger defects and the presence of interatrial aneurysm (perhaps because of increased in situ thrombus formation in the aneurysmal tissue or because PFOs associated with an interatrial septal aneurysm tend to be larger). Despite prior reports concerning paradoxical embolism through a PFO, this phenomenon's magnitude as a risk factor for stroke remains undefined because deep venous thrombosis is infrequently detected in such patients. In one study, pelvic vein thrombi were found more frequently in young patients with cryptogenic stroke than in those with a known cause of stroke. This finding may provide the source of venous thrombi, mainly when a source of venous thromboembolism (VTE) is not initially identified.[6]

The majority of patients with PFO are asymptomatic. However, some may present with severe clinical symptoms like migraines-like headaches, symptoms, and signs for ischemic brain stroker or a transient ischemic event to any of the vital organs ( brain, limb, kidneys, intestine, etc..). Less common clinical presentations include paradoxical embolism, acute myocardial infarction, systemic embolism, and dyspnea at rest.The physical exam is usually unremarkable. A faint systolic murmur due to turbulence of the flow across the foramen may be heard on auscultation.

The most common circumstance prompting the search for PFO is a cryptogenic stroke ( Stroke with no identifiable contributor after extensive workup). PFO also represents a common incidental finding on routine echocardiogram performed for another reason, especially in the neonatal period. A PFO is usually detected by transthoracic echocardiography, transesophageal echocardiogram (TEE), or transcranial Doppler. TEE is the most sensitive test, mainly when performed with contrast media injected during a cough or Valsalva maneuver. However, technical difficulties and the need for sedation make TEE less favorable in the neonatal and pediatric population. Evaluation for PFO in neonates with congenital heart disease should include a detailed description of the presence of PFO, size, flow restriction, and pressure gradient. Patients with cryptogenic strokes should also be evaluated for the existence of venous thromboembolism (VTE). Divers with more than one episode of undeserved decompression illness should undergo evaluation for a right to left shunt. A 2015 diving medicine consensus panel recommended contrasted provocative transthoracic echocardiography for this evaluation because it has a lower complication rate than TEE and is unlikely to miss a clinically significant PFO. [7] Patients with cryptogenic strokes should also be evaluated for venous thromboembolism (VTE) to assess the associated tendency for thromboembolism associated with PFO that influence morbidity and mortality.

In neonates and the pediatric population, PFO doesn't require treatment of followup. PFO is vital in some congenital heart conditions that are dependent on blood shunting at the atrial level.

In adults, treatment for PFO is mainly indicated in a patient with cryptogenic strokes. Different approaches have been suggested, including:

Surgical approach results in complete closure and avoiding the need for long term anticoagulant. However, surgery does require open-heart surgery and the usual risks of the procedure.

As mentioned earlier, PFO is a common finding in newborns and adults; the major differential diagnosis includes other congenital heart diseases like:

In neonates and children, the prognosis of PFO is excellent, and PFO usually closes in most of them. For those children and adults who require surgical closure due to thromboembolism riks, the prognosis is favorable. Surgical outcomes have been well established. Percutaneous closure is promising, but complications are not uncommon. Embolism, dislodgment, and failure to close the PFO have all been reported. Besides, the percutaneous procedure may be associated with damage to the blood vessels, stroke, thrombus formation, and infective endocarditis.

The usual complications of antiplatelet and anticoagulant therapies include bleeding and intracerebral hemorrhage. Intraprocedural complications utilizing device closure include perforation resulting in tamponade, air embolism, device embolization, and stroke. However, these are all rare events in experienced hands, with rates of less than 1%. Subsequent atrial arrhythmias may occur in 3% to 5% but are transient. Although the rate of development of atrial fibrillation has been 5% to 6% with some devices, it is usually associated with thrombus formation. Late cardiac perforation has been reported with some devices but appears to be rare. In comparison, atrial fibrillation was more common among closure patients than anticoagulated patients in secondary preventive strategies.[9]

PFO is a common finding in newborns. It is present in 25% of the general adult population and has been identified as the major contributing factor in cryptogenic stroke in 50% of affected young adults. Identifying PFO, particularly in young cryptogenic stroke patients, is accomplished via TEE with contrast media. Treatment is aimed at preventing a secondary event primarily with antiplatelet or anticoagulation therapy or atrial septal device closure. The risk associated with either treatment is low overall, and the superiority of one therapy over the other is still contested. Accepted device closure treatment is for large PFOs and patients with PFOs who have already had a recurrent neurological event. Any identified venous thromboembolic event involving PFO should be treated with anticoagulation.[2]

The management of patent foramen ovale is made by an interprofessional team that consists of a pediatrician, cardiologist, interventional radiologist, and a cardiac surgeon. The decision to treat depends on the presence of symptoms, size, and presence of complications. Today, in high-risk patients, percutaneous methods of closure have evolved. Patients should be educated on their treatment options and possible complications of each treatment. 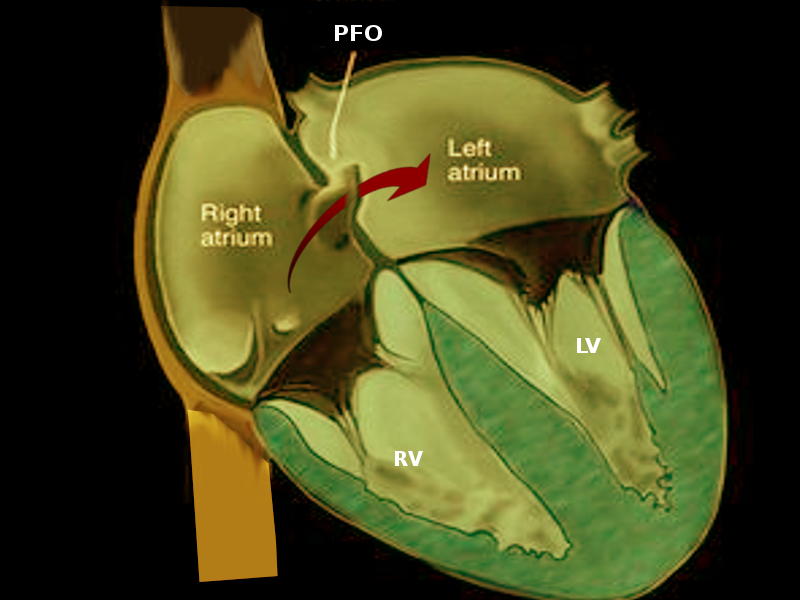