Patellar instability is a spectrum of conditions ranging from intermittent subluxations to dislocation. Patients typically present with obvious deformity and an inability to extend the knee. The recurrence rate following a first-time dislocation is around 15-60%.[1] Generalized patellar instability is thought to represent up to 3% of clinical presentations involving the knee. In most cases, it can be managed conservatively with physiotherapy and bracing, except in the presence of a fracture or recurrent episodes.

Acute patellar dislocations typically occur as a result of trauma, usually a non-contact twisting injury to the knee, or from a direct blow to the medial aspect of the knee. A common mechanism is external tibial rotation with the foot fixed on the ground. Patellar dislocations can also occur in patients with generalized ligamentous laxity. However, those patients mostly tend to have recurrent subluxations of their patella as opposed to a frank dislocation.

Anatomic variations such as patella alta and trochlear dysplasia can predispose individuals to patellar dislocation. Ligamentous laxity is more commonly seen in females, or secondary to connective tissue disorders such as Marfan Syndrome or Ehlers-Danlos, increases the risk of dislocation. Muscular imbalance, particularly weakness of the vastus medialis oblique also plays a role in patellar instability.

Habitual dislocations are characterized by painless dislocations every time the knee flexes, which is usually a result of abnormal tightness of the vastus lateralis muscle and the iliotibial band.

Congenital dislocations can also occur, most commonly in patients with Down syndrome; this is the result of a small patella in combination with a hypoplastic condyle, and typically requires surgical intervention for reduction.

Patellar dislocation accounts for approximately 2 to 3% of knee injuries. This injury tends to affect young and active individuals, with adolescent females and athletes at a higher risk. Incidence is reported as 5.8 per 100,000 but could be as high as 29 per 100,000 in the adolescent population.[2] Acute dislocations tend to occur relatively equally in males and females. Patella dislocations are most common in the second and third decades of life.

Patellar dislocations tend to occur in a lateral direction, partly because the direction of pull of the quadriceps muscle is slightly lateral to the mechanical axis of the limb. Medial instability is rare and more likely to result from congenital conditions, quadriceps atrophy, or iatrogenically. Intra-articular dislocation is also uncommon, but can occur following trauma where the patella is avulsed from the quadriceps tendon and is then rotated. Superior dislocations can occur in elderly patients where forced hyperextension causes the patella to lock on an anterior femoral osteophyte.

Individuals with an increased Q angle are predisposed to dislocation. The Q angle is measured by drawing a line from the anterior superior iliac spine (ASIS) through the center of the patella, and a second line from the center of the patella to the tibial tubercle. Normal Q angle measurement is typically higher in females than in males, 18 degrees compared to 14 degrees. Measurements that exceed those normals predispose the patient to patellar instability.

There are several static and dynamic stabilizers of the patella. The medial patellofemoral ligament (MPFL) is the primary static restraint to lateral patellar instability during the first 20 degrees of knee flexion. This ligament is almost always torn with patellar dislocations. The bony structure of the patellofemoral joint is another static stabilizer, especially during deeper knee flexion angles. Anatomical factors that predispose to dislocation include patella alta (high riding patella), trochlear dysplasia or lateral femoral condyle hypoplasia, and excessive lateral patella tilt. Distortion of the normal patellorfemoral joint anatomy places the patella at higher risk for instability and dislocation. The main dynamic stabilizer of the patella is the vastus medialis obliquus (VMO) muscle. This is the most distal portion of the quadriceps muscle, and exerts a medially directed pull which helps maintain the patella well positioned. Weakness or dysplasia of this muscle increases the risk for dislocations.

Patients typically describe pain and deformity of the knee following a non-contact twisting injury, or a direct blow to the anterior or medial aspect of the knee. They often describe the knee giving way and feeling a ‘pop’, and commonly report swelling in the acute setting. In chronic cases, pain is usually anterior or anteromedial, and patients may report giving way, clicking and catching, with the symptoms being worse during flexion and kneeling.

On examination of an acute dislocation, joint effusion or hemarthrosis is a typical finding, but is less likely in the case of chronic dislocation. Alignment abnormalities can also be noted such as femoral anteversion, patella alta, tibial torsion, genu recurvatum, genu valgum or varum, pes planus, and general ligamentous laxity. The knee and surrounding structures can also be palpated, checking for tenderness or irregularities along all the poles of the patella (superior, inferior, medial and lateral), especially the medial pole. If pain permits, flexion and extension should be checked, feeling for any crepitus or restriction of movement. Assessment of the collateral and cruciate ligaments is also necessary.

Some patients can exhibit a positive J sign; excessive lateral patellar deviation going from flexion to extension. In a normal knee, the patella can be moved medially and laterally between twenty-five and fifty percent the width of the patella. In recurrent dislocators, it may move further (patellar glide). They may have a positive apprehension test; the knee is held relaxed in 20 to 30 degrees of flexion, and the patella is pushed laterally. A positive test is present when there is apprehension or guarding.

It is necessary to get anteroposterior (AP) and lateral radiographs of the affected knee, as well as patellar (sunrise) views.[3] These will help identify fractures, the presence of loose bodies, malalignment or arthritic changes. Fractures or loose bodies usually originate from the medial aspect of the patella, and can sometimes involve the lateral femoral condyle. Anatomic risk factors for dislocation can also be noted on the radiographs such as patella alta; there may be disruption of the Blumensaat line whereby the lower pole of the patella should lie on a line drawn anteriorly from the intercondylar notch with the knee flexed to 30 degrees. The Insall-Salvati ratio is classically measured to determine patellar height, and is measured on the lateral view with the knee flexed to 30 degrees; it is the ratio measuring the length of the patellar tendon (LL; from the inferior patellar pole to the tibial tubercle) and the patellar length (LP; the longest diagonal length of the patella). A normal ratio is 1.0; a ratio greater than 1.2 suggests patella alta, while less than 0.8 suggests patella baja.

CT scan allows measurement of the TT-TG distance which is an important parameter in evaluation and management of patellar dislocation. A line is drawn tangent to the posterior border of both femoral condyles. Then 2 lines are drawn perpendicular to this line. One line is from the apex of the tibial tubercle (A), and one line is from the deepest point of the trochlear groove (B). The distance between lines A and B is the TT-TG distance, and is normally less than 20mm. A measurement above 20mm is considered abnormal. The CT scan can also delineate the presence and extent of osteochondral fractures and can help plan any surgical intervention.

Magnetic resonance imaging is very helpful in looking at the soft tissue structures of the knee. In cases of complete dislocation, there is typically a characteristic bruising pattern of the lateral femoral condyle and medial patella. There may be disruption of the MPFL (usually at the medial femoral epicondyle insertion).[4] This imaging modality is very helpful in diagnosing articular cartilage damage on the medial patellar facet, and is more sensitive in detecting osteochondral lesions. It can also aid in looking at the trochlear anatomy in cases of trochlear dysplasia. The Dejour's classification of trochlear dysplasia has 4 grades; type A is flatter than normal with a sulcus angle greater than 145 degrees, type B which is flat, type C which is convex, and type D which is convex with a supratrochlear spur.

Physiotherapy can be necessary for as long as two to three months following an initial dislocation. Physiotherapy is vital, as if the medial retinaculum does not heal and the VMO does not adequately rehabilitate, recurrent dislocation will ensue. Studies suggest there is a 20 to 40% risk of re-dislocation, with even higher rates following a second dislocation.[8]

It is common for patients to remain symptomatic after the first dislocation. Atkin et al. found that at 6 months, 58% of patients experience limitation in strenuous activities.[9] Although the range of motion was regained, participation in sports was reduced in the first 6 months following injury; kneeling and squatting were particularly challenging. Failure to return to sport occurred in 55%. Maenpaa et al. found that over 50% of patients have complications following a first-time dislocation including re-dislocation, subluxation or patellofemoral pain.[10]

Patients with anatomic abnormalities as the main reason for their dislocation may also sustain a dislocation to the contralateral patella requiring treatment. Stability, however, tends to increase with advancing age of the patient.

Complications of acute patella dislocation include associated osteochondral fracture, the risk of recurrence, and degenerative arthritis.

Following osteotomy, patients often complain of pain over the screw site. There may be a loss of ability to kneel comfortably. There is also a risk of proximal tibial fracture.[11]

Even following surgery, there remains a risk of recurrent lateral patellar instability.

Postoperative rehabilitation depends on the surgery completed. A lateral release is quickest to recover from, with osteotomies taking considerably longer. Recovery from surgery can last from 6 months to a year, and physiotherapy is vital after a period of immobilization.

Patients should be discouraged from returning too early to contact sports before they have undergone sufficient physiotherapy to aid the strengthening of surrounding muscles and the core. Slip-on knee braces may be of benefit in the early rehabilitative phase. The importance of adherence to a physiotherapy plan after initial dislocation should be a point of emphasis, because good compliance may minimize the risk of further dislocation and the need for operative intervention.

Close liaison between emergency medicine doctors, orthopedic teams, radiology, and physiotherapy is vital to managing patellar dislocations safely. This is especially true in the early stages when additional CT/MRI scans may be required to rule out more serious injuries. Once the patient is on the non-operative management path, physiotherapists are crucial in ensuring patients strengthen muscles correctly as this may be all that is needed to manage an acute dislocation. Working within an interprofessional team will enhance patient care and outcomes. 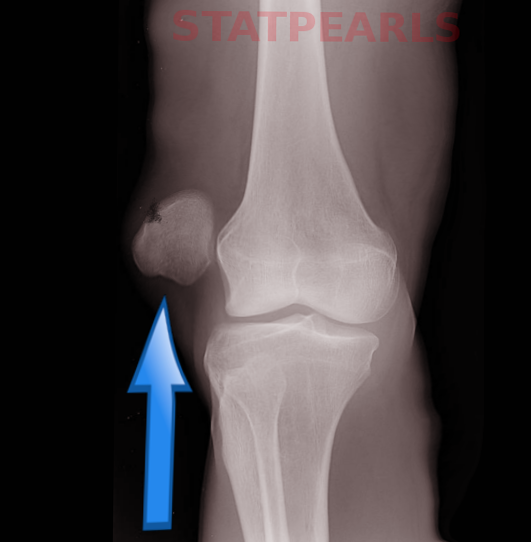