Superior parathyroid glands: These glands derive from the fourth pharyngeal pouch.  They are classically located near the posterolateral aspect of the superior pole of the thyroid, 1cm superior to the junction of the recurrent laryngeal nerve (RLN), and the inferior thyroid artery. They classically lie deep to the plane of the recurrent laryngeal nerve.

Inferior parathyroid glands: These glands derive from the third pharyngeal pouch. These glands are classically located near the inferior poles of the thyroid glands, within 1-2 cm of the insertion of the inferior thyroid artery into the inferior pole of the thyroid. They classically lie superficial to the plane of the RLN. Their location is much more variable than the superior parathyroids, and can be intra-thyroidal or within the thymus or other mediastinal structures, and can even be found along the aortic arch.[2]

The parathyroid glands have two distinct types of cells: the chief cells and the oxyphil cells.

PTH regulation is via a negative feedback loop via the Chief cells' unique G- protein calcium receptor.  An increase in blood calcium allows the calcium to bind to G protein and increase the production of phosphoinositide molecules. This molecule prevents the secretion of PTH.  Vitamin D also acts directly on the gland to decrease the transcription of the PTH gene leading to decreased PTH synthesis.

When there is a detected decrease in blood calcium, there is less calcium binding to the G-protein of the chief cells. This decreased binding subsequently leads to a decreased production of the phosphoinositide molecule allowing increased secretion of PTH. A decrease in vitamin D permits an increase in PTH synthesis due to the activation of the transcription of the PTH gene.[4]

The parathyroid glands originate from the third and fourth pharyngeal pouches of the endoderm, with contributions from the neural crest and the ectoderm.  At six weeks in which there is an elongation of the pouch.  The pouch is initially hollow, but with further development, cell proliferation occurs allowing for solidification and subsequent migration. [5]

Parathyroid glands can have inconsistent locations between individuals and these locations can vary widely. Due to these variants, damage to the glands can occur during neck surgery, especially thyroidectomy. An essential component of a safe thyroidectomy is the identification and preservation of as many parathyroid glands as possible. While, in theory, a portion of a single parathyroid gland should be sufficient to maintain serum calcium homeostasis, it is prudent to identify and preserve all glands. If this is not possible, such as in thyroid cancer surgery for very advanced disease, where oncologic safety requires a comprehensive, en bloc, resection, patients must be counseled preoperatively that lifelong calcium and vitamin D supplementation may be required. Thankfully this is very rare, and experienced surgeons can routinely identify and preserve the glands. Removal of both pairs of the parathyroid gland is extremely uncommon and would cause a decrease in the serum calcium levels, leading to the development of tetany, cardiac arrhythmias, and a host of other untoward effects if left untreated.[7][1]

Removal of Parathyroid Gland Due to Pathologies

A hyperfunctioning parathyroid gland often requires surgical intervention. When the parathyroid over-secretes PTH, there are risks associated with elevated serum calcium. However, many patients present with incidentally discovered hypercalcemia. These patients may only require monitoring, and even mild symptoms can be medically manageable. These "biochemically" hyperparathyroid patients (who are otherwise asymptomatic) present an ongoing conundrum: some nephrologists recommend parathyroidectomy, while others recommend medical management. However, when there are symptoms present due to hypercalcemia, surgical intervention is definitely indicated.[8]

When surgery is considered the most traditional technique is bilateral neck exploration. During this procedure, the surgeon will locate all four of the glands and based on appearance will determine if partial or complete glandular removal is necessary. This is especially important in cases of secondary hyperparathyroidism in patients with renal failure. Intra-operative rapid PTH monitoring is a useful tool if it is available.

Another less invasive approach can potentially allow a more limited operation of the diseased gland. This allows the surgeon to target the gland that has been identified after pre-operative localizing tests. Radiographic parathyroidectomy can be considered as a type of focused parathyroidectomy.  The patient receives a small injection of Tc-99m sestamibi the morning of the surgery. A handheld gamma probe is employed in the operating theater by the surgeon to detect the hyperactive gland. After excision of the diseased tissue, the probe can be used again to detect if any overactive tissue remains. The rate of non-localizing scans is hugely variable and is dependent on the underlying pathophysiology. Thus, the prudent surgeon will always discuss with the patient the potential need for formal, four-gland exploration.  Additionally, while a solitary parathyroid adenoma is the most common cause of localizable hyperparathyroidism, undetected double adenomas are reported in as many as 10% of individuals[9]. Intraoperative rapid PTH assay is similarly useful in these patients.

Primary: Primary hyperparathyroidism is due to direct gland alterations. This is most commonly due to a parathyroid gland adenoma, but can also be due to diffuse four-gland hyperplasia, malignancy, or multiple endocrine neoplasia (MEN) types 1 or 2. Excess secretion of PTH will present with hyperparathyroidism and may also present as hypercalcemia, hypoglycemia, osteoporosis, osteitis fibrosa cystica, and hypertension (particularly diastolic hypertension).

Secondary: This is a physiological increase of PTH due to reduced calcium levels in the blood. The most common cause is chronic kidney disease, but can also be due to vitamin D deficiency or malnutrition.

Malignant: Various tumors (bronchial squamous cell carcinomas) can produce a parathyroid-like protein that can mimic PTH function. Though the protein mimics PTH, reduction of actual PTH levels occurs due to the negative feedback to the parathyroid gland. This can be determined by measuring serum levels of both intact PTH and parathyroid-related hormone (which is produced by the tumor).

Hypercalcemia can be the result of an overactive parathyroid gland. Symptoms can range from being non-existent to severe.

Hypoparathyroidism is due to reduced activity of the gland.  This condition has primary and secondary classifications.

Primary: There is a gland failure which results in a decrease in PTH secretion.  Patients who suffer from this disorder will often need calcium supplementation

Secondary: This occurs when there is surgical removal/injury of the parathyroids. This can often be accidental during neck surgery or expected after more extensive neck surgery, such as a total laryngectomy with total thyroidectomy. Radiation therapy for various neck malignancies can also lead to the destruction of the parathyroids and subsequent hypoparathyroidism.[12] 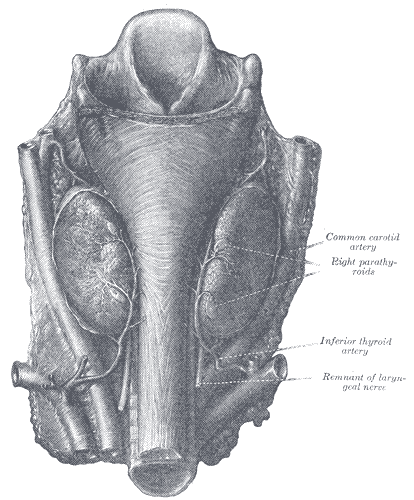