The palmar grasp reflex is a primitive, prehensile, involuntary response to a mechanical stimulus present in a newborn. It appears around 16 weeks of gestation and can be elicited in preterm infants as young as 25 weeks of postconceptional age.[1][2][3]

To elicit the reflex, the infant is laid in a symmetrical supine and comfortable position while he or she is awake.[4] The examiner strokes the palm of the infant with his or her index finger. The response to this stimulus comprises two phases: finger closure and clinging. The infant's fingers undergo flexion to enclose the examiner's finger (finger closure). The pressure applied to the palm produces traction on the fingers' tendons, leading to the clinging action.[5] The thumb is not affected by this reflex.

The higher brain centers regulate the palmar grasp, though it is a spinal reflex. The afferent nerve fibers include the ulnar and median sensory nerves that supply the palmar surface. The spinal relay center is in the cervical spinal cord, and the efferent nerve fibers have the motor nerves that supply the hand's flexors and adductors.[6][7] The premotor cortex, supplementary cortex, and cingulate motor cortex of the brain are implicated in controlling the grasp reflex through the spinal interneurons.[8][9][10]

This reflex disappears typically by six months of age, signifying cortical maturation and the development of voluntary motor milestones.[6][11] However, a weak reflex before six months or persistence of the reflex even after six months implies an underlying abnormality. A weak response presents in peripheral nerve involvement, such as an injury to the roots, plexus, or spinal cord.[12] Persistence of the reflex beyond six months is usually present in spastic cerebral palsy.[13] It can also reappear in adulthood, indicating a cortical lesion affecting the medial or lateral frontal cortex (e.g., ischemic or hemorrhagic stroke).[8][9][14] The injury to the higher center removes the cortical inhibition leading to the release of the primitive reflex.[8]

The palmar reflex was observed already in the fetal period when the baby grasps the umbilical cord. In premature babies, the palmar reflex follows the same time frame as babies born at term.

The original purpose of the reflex is vestigial or unknown, though it can aid in diagnosing specific pathologies. It serves nothing more than a rudimentary phylogenetic function necessary for the arboreal life of newborn monkeys[10].

Babies a few months old are unable to organize movements to grab an object voluntarily. The palmar reflex probably serves to create a basic motor pattern that lays the foundation for obtaining this voluntary ability. Furthermore, this reflection creates interaction and bonds between the infant and the adult.

From a clinical point of view, the reflex can be abnormal if the child responds with an exaggerated reflex (within six months of life) or is weak; equally, it is a clinical neurological hallmark if it persists. The reflex may be absent, and this event highlights a peripheral neurological injury or spinal cord involvement, particularly with an asymmetric response. If the lesion is central, the reflex could last longer, such as in the presence of spastic hemiplegia or quadriplegia; on the contrary, if the lesion is typical of an infantile cerebral palsy or athetoid type, the palmar grip is weak.

According to recent animal studies, another reason for the palmar reflex's alteration is an inadequate (minor) amount of melatonin from the female towards the fetus. This absence or decreased availability will alter the upper centers' functions, with an abnormal palmar reflex. Maternal melatonin provides the fetus with valuable information for internal rhythms (photoperiodic information) and future nervous patterns for extra-uterine development.

According to an observational study on children, the palmar reflex is stronger if the baby is hungry and could indicate the baby's need to be breastfed.

The palmar grasp reflex is a routine part of neurological examination done in neonates. Even with just a phylogenetic role to play, it can provide clues to diagnose certain pathologies like cerebral palsy or peripheral nerve injury.[13][10][12]. Early diagnosis and treatment are crucial parts of neurological pathology, as delay in any intervention can deter the prognosis.[15] The reflex is simple to perform, and all healthcare professionals can interpret any abnormal response.

The treatment of cerebral palsy requires a holistic approach by an occupational therapist, physical therapists, vocational therapists, pediatricians, pediatric surgeons, and nurses.[16] Along with early stimulation, proper nursing care is essential when the patient is bedridden. As interventional therapy is long-term, the clinical team should provide counseling to the parents with information on support groups, special education, etc.

Peripheral nerve injury in a newborn occurs mainly during labor when the child has shoulder dystocia or is large for gestational age. Obstetricians should make sure to take care of high-risk pregnancies, counsel the mother about maintaining proper health, having regular check-ups with her doctor, etc. Fetal distress should undergo assessment efficiently, and timely surgical intervention should commence if necessary. Any suspected child abuse, which might cause peripheral injury, should be reported to child protective services.

Manual osteopathic treatment can increase the parasympathetic system. We can assume that, according to a study on spastic patients, an increase in vagal activity may help control the altered palmar reflex better.

Any abnormality in the palmar grasp reflex warrants monitoring of the underlying disease rather than the reflex itself. The child's growth and development should receive an assessment at every visit as a complete physical examination gives a better prognosis than a single entity.[11] It includes features like the muscles' tone, the bulk of the muscles, respiration, and the cry.[4] Consistent monitoring, motivation, and intervention are essential for better outcomes. 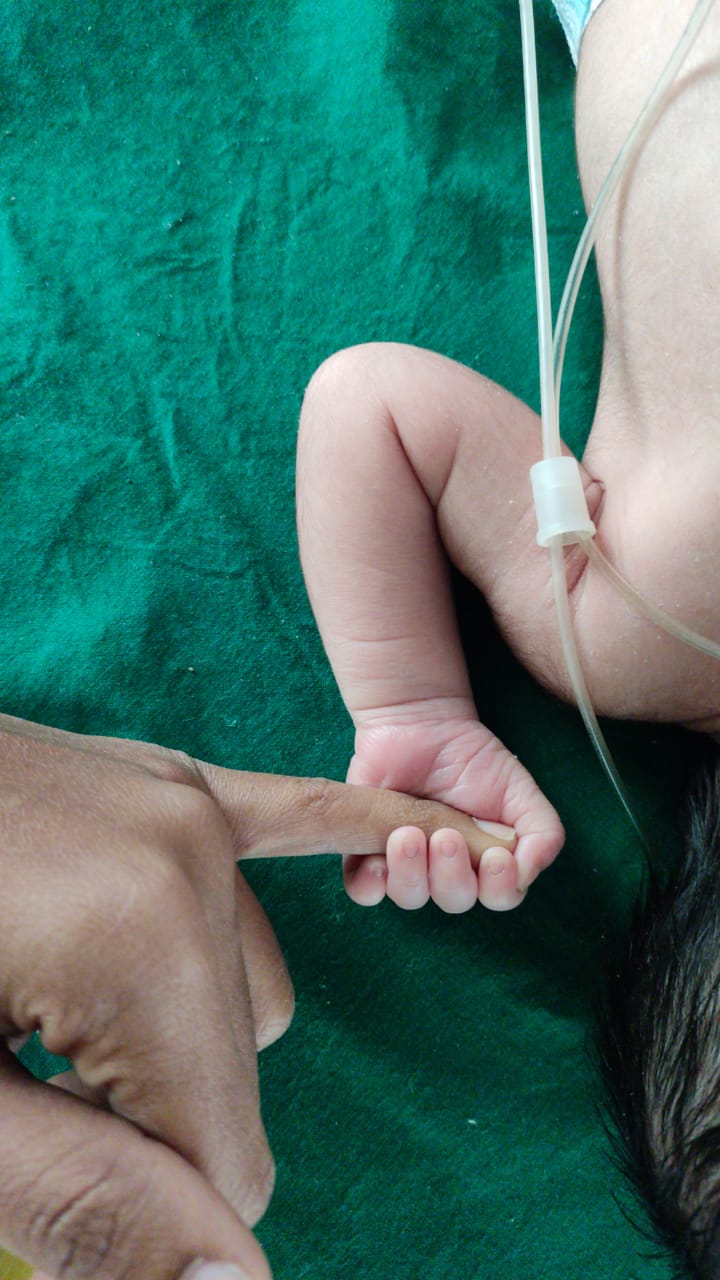 Palmar grasp reflex - a neonate tightly holding on to the examiner's finger after the palm was stroked.
Contributed by Aabha A Anekar

POLLACK SL, The grasp response in the neonate; its characteristics and interaction with the tonic neck reflex. Archives of neurology. 1960 Nov;     [PubMed PMID: 13736833]

Little WJ, On the influence of abnormal parturition, difficult labours, premature birth, and asphyxia neonatorum, on the mental and physical condition of the child, especially in relation to deformities. Clinical orthopaedics and related research. 1966 May-Jun     [PubMed PMID: 5950310]