Melanocytes arise from neural crest cells and are usually found in the skin. However, melanocytes are also found in mucosal membranes. Melanocytes in mucosal membranes are distributed to the oral cavity, nasal cavity, paranasal sinuses, esophagus, larynx, vagina, cervix, rectum, and anus. Melanoma results from a malignant change of melanocytes. This activity reviews the pathophysiology, etiology, presentation, and diagnosis of oral melanoma and highlights the role of the interprofessional team in its management.

Melanocytes arise from neural crest cells and are frequently found in the skin. However, melanocytes are also found in mucosal membranes. Melanocytes in mucosal membranes are distributed to the oral cavity, nasal cavity, paranasal sinuses, esophagus, larynx, vagina, cervix, rectum, and anus. Melanoma results from a malignant change of melanocytes. Melanoma in the head and neck accounts for upward of 25% of all melanomas. Mucosal melanomas account for less than 1% of all melanoma. However, mucosal melanoma accounts for roughly 10% of melanoma of the head and neck. The most common sites for mucosal melanoma in order are nasal, paranasal sinuses, oral cavity, and nasopharynx. Of all mucosal melanomas, paranasal sinus has the worst prognosis. The best prognosis locations are the nasal and oral cavity. In 1885, the first case of oral melanoma was reported.  Approximately 80% of oral malignant melanomas develop in the mucosa of the upper jaws (maxillary anterior gingiva). The majority of these lesions occur in the keratinizing mucosa of the palate and alveolar gingivae. Lesions are frequently asymptomatic until ulceration and hemorrhage are present. Compared with other melanomas, mucosal melanomas have the lowest percentage of 5-year survival. There is a poor 5-year survival at approximately 15 to 30%, likely due to delayed detection.[1][2][3][4]

The peak age for diagnosis of mucosal melanoma is between 65 and 79 years, which is 1 to 2 decades later than cutaneous melanoma. Mucosal melanomas are found more in women than in men. However, in oral malignant melanoma, the gender distribution is reported as 1:1. Melanoma of the lip has a slightly male predominance. Malignant melanoma of the mouth has a higher prevalence in blacks, Japanese, and Indians of Asia.  The higher prevalence may be due to the higher published reports than actual rates.

Melanoma develops from a malignant transformation of melanocytes.  A number of pathways have been identified.

Recent data indicates that c-KIT (CD117) is overexpressed in upward of 80% of mucosal melanoma cases. This pathway is important and common in acral and mucosal melanoma, melanomas unrelated to sun exposure. KIT is a transmembrane tyrosine kinase receptor expressed on hematopoietic progenitor cells, melanocytes, mast cells, primordial germ cells, and interstitial cells of Cajal. Activating mutations and amplifications cause activation of growth and proliferation pathways. New drugs, such as imatinib, work on this pathway.

Bioinformatics Resources and Applications Facility (BRAF) protein mutations are uncommon in mucosal melanoma and found in less than 10% of cases. However, in cutaneous melanoma, BRAF mutations are found in up to 80% of melanomas.

The mucosa of the mouth differs from the skin. Due to the lack of histological landmarks that are analogous to the papillary, reticular dermis, and muscle bundles, a pathological leveling system and description cannot be applied properly for mucosal melanomas. Therefore, Clark’s levels, which are commonly used in cutaneous melanoma, cannot be used. Many melanomas in the mouth have a histologic similarity with lentigo maligna melanoma in a radial growth phase.

The initial presentation of malignant melanoma of the mouth is often swelling, which is usually with a brown, dark blue, or black macule.  Satellite foci may surround the primary lesion. Just like cutaneous melanomas, melanoma in the mouth may be asymmetric with irregular borders. In amelanotic melanomas, pigmentation is not present. Amelanotic melanomas may simulate pyogenic granulomas. Many times, due to late diagnosis, erythema and ulceration may be present.

Oral melanomas are often silent with minimal symptoms until the advanced stage. The lesions can appear as pigmented dark brown to blue-black lesions or apigmented mucosa-colored or white lesions on physical examination. Erythema may be present if inflammation is present. The majority of the cases involve the palate and maxillary gingiva. Metastatic melanoma usually arises from the buccal mucosa, tongue, or mandible. If an elevated lesion with a variation of color within the lesion is present, with surrounding satellite lesions and ulceration, a high-grade advanced disease can be expected. Regional metastasis is rare.

Surgery is the mainstay of treatment in oral malignant melanoma. Radical excision with disease-free margins is the first goal in surgical management. A diagnostic excisional biopsy followed by wide local excision where the diagnosis is proven. Following complete surgical excision, relapse rates have been reported to be 10 to 20%.[5][6][7][8]

In a clinically positive neck, a neck dissection is mandatory in all cases of head and neck mucosal melanoma that is amenable to radical treatment.

It has less value in staging and is less useful in predicting lymphatic drainage patterns in oral melanoma.

Radiotherapy is used to control local disease. This is in contrast to cutaneous melanoma.  Radiotherapy is valuable in the goal of achieving relapse-free survival.

Due to the low incidence of oral melanoma, well-controlled trials with large participants have been limited. Chemotherapy and immunotherapy may have a role in the prevention of metastatic disease.

The differential diagnosis of oral melanoma involves anything that can cause pigmentation within the mouth.

There is no T1 or T2 in mucosal melanoma.

Overall, the prognosis of malignant melanoma is poor with 5-year survival at most 30% often due to late diagnosis.

Independent prognostic factors that have been suggested are:

After complete surgical excision, relapse rates have been reported to be 10 to 20%. Recurrence has been noted even up to 11 years following surgery.

Metastases to the lymph nodes of the neck, lungs, liver, and brain can be seen.

Melanoma care and treatment require an interprofessional approach. Melanomas of the head and neck, specifically the mouth, have a poor prognosis and often have advanced disease. Consultations with otolaryngology (head and neck surgery), surgical oncology, pathology, speech therapy, and other specialists depending on complications and distant metastases are warranted.

Preventive strategies for oral malignant melanoma are not known. Some experts suggest educating patients on regular oral self-examination and helping identify early suspicious lesions. Due to the risk of recurrence, patients with a history of oral melanoma require lifelong follow-up.

Primary mucosal melanomas are aggressive tumors that are rarer than cutaneous melanoma. Head and neck mucosal melanomas are the most common. Wide excision is the treatment of choice. Oral melanoma is complicated in that detection does not usually occur until the lesion is advanced. Overall 5-year survival is low, which highlights the need for aggressive treatment and continued follow-up afterward. Detection of c-KIT mutations has been identified in upwards of 80% of mucosal melanomas and as little as 10% of BRAF mutations; this is the opposite of cutaneous melanoma. Newer drugs such as imatinib are used in c-KIT pathway melanomas. It is important to maintain a high index of suspicion with pigmented lesions within the oral cavity, especially those in sites most common to oral melanoma (palate and maxillary gingiva).

In general, primary mucosal melanomas are aggressive tumors that are rarer than cutaneous melanoma. Oral melanoma is complicated in that detection does not usually occur until the lesion is advanced. The clinicians need to maintain a high index of suspicion with pigmented lesions within the oral cavity, especially those in sites most common to oral melanoma. A self-examination strategy needs to be implemented for early detection, which requires trained primary care nurses to educate the patient on proper oral examination. They also need to educate the patient on what constitutes a high-risk lesion and to communicate these findings to the clinician as soon as they arise. Despite the low incidence of the disease, a collaborative interprofessional team can help reduce morbidity and mortality associated with this disease. [Level 5] 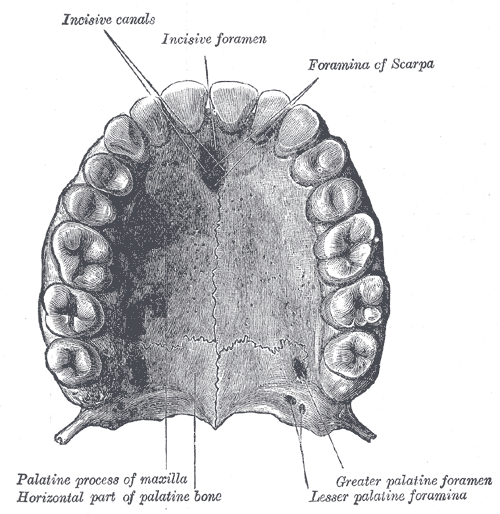 The Mouth, Permanent teeth of upper dental arch; seen from below
Contributed by Gray's Anatomy Plates

Williams MD,Franchi A,Helliwell T,Müller S,Thompson LDR, Data Set for Reporting of Mucosal Melanomas of the Head and Neck: Explanations and Recommendations of the Guidelines From the International Collaboration on Cancer Reporting. Archives of pathology     [PubMed PMID: 30500297]