Renal oncocytomas are common benign kidney neoplasms that account for 3 to 7 percent of renal neoplasms. They usually occur in adults, most frequently in the seventh decade of life. Renal oncocytomas may be discovered incidentally or may be diagnosed with biopsy or excision. Renal oncocytomas usually have an excellent prognosis and are not associated with an aggressive clinical course; however, there can occasionally be metastasis to liver and bone and fatalities have occurred. Surgical excision is curative in the absence of metastases. This activity describes the evaluation, diagnosis, and management of renal oncocytoma and stresses the role of team-based interprofessional care for affected patients.

Renal oncocytomas are common benign kidney neoplasms that account for 3% to 7%  of all renal neoplasms.[1] They usually occur in adults, most frequently in the seventh decade of life. Renal oncocytomas may be discovered incidentally or may be diagnosed on biopsy or excision. Oncocytomas have a classic gross appearance of a well-circumscribed tan or mahogany colored mass with a stellate central scar. Histologically they classically appear as well-circumscribed lesions with nested architecture, bland cytology, regular nuclei with prominent central nucleoli, and eosinophilic cytoplasm.[2] Despite the classic appearance, there are several entities that mimic oncocytoma so diagnosis remains a challenge. Diagnosis is primarily made based on histologic appearance and, in challenging cases, with immunohistochemistry. Rarely cytogenetic studies may be useful.[2]

Renal oncocytomas usually have an excellent prognosis and are not associated with an aggressive clinical course; however, there can occasionally be metastasis to liver and bone and fatalities have occurred. Surgical excision is curative if there have not been metastases.[3]

Renal oncocytomas are believed to arise from pathologic neoplastic growth of the intercalated epithelial cells after an accumulation of chromosomal abnormalities.[4]

Oncocytomas make up 3% to 7% of all renal epithelial tumors.[1] They are most commonly seen in adults older than 50 years, are more common in males, and have a peak frequency in the seventh decade of life. However, these tumors rarely occur in the pediatric population.[1]

This lesion is commonly seen in patients with Birt-Hogg-Dube syndrome. These patients develop a mean of 5.3 renal tumors in their lifetime. These lesions consist mostly of chromophobe renal carcinoma and oncocytomas.[5]

Grossly renal oncocytomas are well-circumscribed, tan-brown or mahogany-colored masses with a central stellate scar.[2] The central scar is characteristic of renal oncocytoma, but it is not specific for this entity and is not always present.[2] Grossly, oncocytoma can occasionally interdigitate with perinephric fat. When it does this, there does not appear to be any stromal reaction or response in the fat. This does not change benign behavior.[2] Similarly,  a small portion of tumors may have vascular invasion.

Microscopically, renal oncocytomas appear well-circumscribed. The mass is composed of nests and tubular structures line by round to polygonal cells with abundant granular eosinophilic cytoplasm. The cells have uniform nuclei with prominent central nucleoli.[1] The background stroma is edematous, myxomatous, or hyalinized.[6] Other possible architectural patterns include compact nesting, solid, focal rare abortive papillary structures, and cystic spaces.[2] One variation is a small cell oncocytoma, which occurs when there are areas with scant cytoplasm.

It is well established that oncocytomas may contain a degree of cytologic atypia, which is thought to be degenerative. This atypia may include increased nuclear size, irregular nuclear contours, and smudged chromatin.[2] Mitosis is extremely rare in oncocytoma, and more than one mitotic figure should not be found.[2]

Clinicians can confirm the diagnosis of oncocytoma with immunohistochemistry. The most common stain used is cytokeratin 7, which is minimally positive and limited to scattered individual cells or small clusters. AMACR may be positive in low intensity. Oncocytoma should have membranous positivity for CD117. Other positive stains include cyclin D1, kidney-specific cadherin, S100A1, and E-cadherin.[7][2] Colloidal iron staining is often described as helpful in diagnosis, but there is wide variation in staining techniques that can make interpretation challenging. If used, colloidal iron staining should be negative.[2] Vimentin may be focally positive at the edge of the central scar but should not be diffusely positive.[2] Oncocytoma will be negative for melanocytic markers.

If evaluated on a cytology specimen, oncocytoma will have large cells with granular cytoplasm, regular nuclei with tiny nucleoli, and minimal atypia.[8]

While oncocytomas are usually diagnosed incidentally and patients do not have urologic complaints, oncocytomas can be symptomatic. Symptoms include gross hematuria, flank pain, and a palpable mass on physical exam.[1]

Evaluation is usually done on imaging initially. Oncocytomas may be discovered incidentally. There are no precise radiologic criteria for distinguishing a benign oncocytoma from a malignant lesion like renal cell carcinoma. However, central scar and hypervascularity can often be appreciated on imaging.[2]

Evaluation of a kidney mass can be done with core biopsy, fine needle aspiration, or resection. Oncocytomas are often small, and since 20% to 45% of small renal masses are ultimately found to be benign, active surveillance is often an option offered to some patients.[2] If the mass is biopsied, there is up to an 80% diagnostic rate and subtype and nuclear grade can be provided.[2]

If the histology and staining patterns are difficult to interpret, conventional karyotyping and FISH may be considered to look for a diploid karyotype of loss of chromosome 1, which would be supportive for the diagnosis of oncocytoma.[2]

In a case series of 70 patients who underwent total or partial nephrectomy, surgery was curative in 68 of the patients. One patient had stable metastatic disease in the liver, and one patient died with metastatic disease in the bone and liver. The study concluded that while the vast majority of renal oncocytomas are benign and are cured with surgical excision, some may exhibit metastasis.[3]

Distinguishing oncocytomas from malignant mimics can be challenging and should be done with immunohistochemistry.[10]

Renal oncocytoma is a benign neoplasm that only rarely metastasizes and has an excellent prognosis.[11] There is rarely reported with liver metastasis.[3]

Even atypical morphologic features in oncocytoma do not alter the excellent prognosis and are not associated with an aggressive clinical course.[3]

Oncocytomas have classic gross features of a well-circumscribed tan or mahogany colored mass with a central stellate scar.[2]

Healthcare workers (nurse practitioners, primary care providers) may see a patient with an incidental finding of a renal oncocytoma or the patient may present with a flank mass and/or hematuria. It is important to refer these patients promptly to a urologist for definitive management. 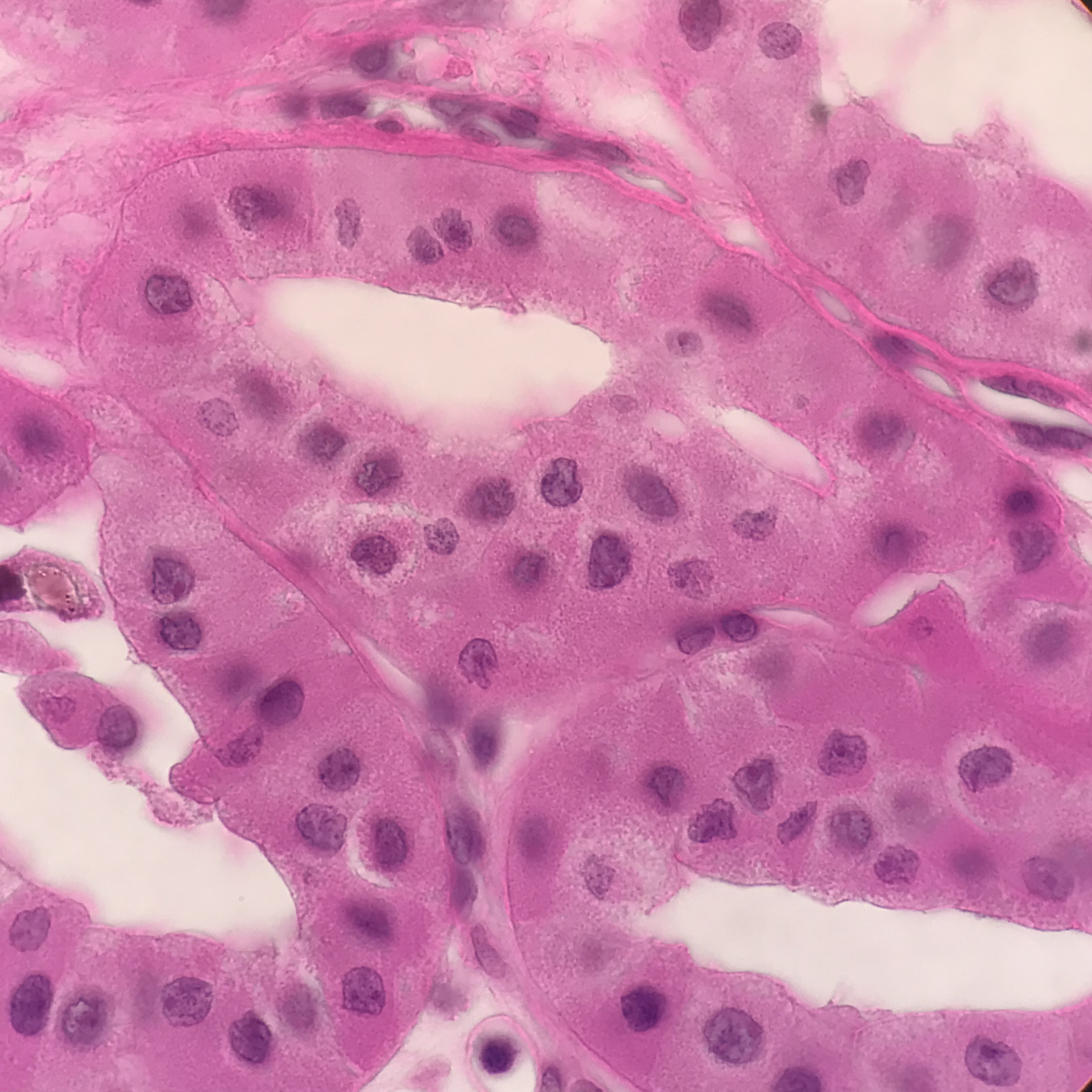 Wu A, Oncocytic Renal Neoplasms on Resections and Core Biopsies: Our Approach to This Challenging Differential Diagnosis. Archives of pathology     [PubMed PMID: 28968156]