Ultrasound is a noninvasive diagnostic modality that can quickly confirm an intrauterine pregnancy at the bedside, significantly shortening the length of stay for pregnant patients and avoiding the use of contrast or radiation. Point-of-care pelvic ultrasound in the hands yields the greatest diagnostic potential in the first trimester of pregnancy. This activity illustrates how an obstetric ultrasound can help detect disorders of pregnancy and highlights the role of the interprofessional team in caring for patients undergoing obstetrical ultrasound.

Obstetricians first used ultrasound to diagnose an early intrauterine pregnancy in the 1960s and 1970s. Emergency physicians adapted ultrasound for point-of-care use in the 1990s. Ultrasound is a noninvasive diagnostic modality that can quickly confirm an intrauterine pregnancy at the bedside, significantly shortening the emergency department (ED) length of stay for pregnant patients.[18][1] Point-of-care pelvic ultrasound in the hands of emergency medicine providers yields the highest diagnostic potential in the first trimester period of pregnancy.[2][3] For this reason, the remainder of the article focus is on ultrasound in first-trimester pregnancy.

The landmarks of the uterus are the bladder and vaginal stripe. The bladder is located anterior and inferior to the uterus, and the vaginal stripe is a hyperechoic line that is located posterior to the bladder. The vaginal stripe ends at the cervix, and the uterine fundus usually curves up anteriorly (anteverted uterus, approximately 80% of women), but in a smaller subset of females, curves posteriorly (retroverted uterus). The endometrium usually appears as a hyperechoic line in the center of the uterine fundus.

There are no absolute contraindications to performing a transabdominal pelvic ultrasound in early pregnancy. Care should be taken not to scan over a wound or incision to avoid contamination and infection. A transvaginal ultrasound is contraindicated in the setting of hypotension. It is also recommended to use settings that expose the first-trimester fetus to as low as reasonably achievable (ALARA) frequencies by avoiding color and spectral Doppler during the exam.

First-trimester pregnancy transabdominal ultrasound should be performed with a low-frequency probe, ideally with a large convex footprint. If a transvaginal ultrasound exam is indicated, an endocavitary probe with sheath can improve visualization of the uterus and adnexal structures. A high-level disinfectant system is needed to clean the endocavitary probe between uses.

A trained provider can perform first-trimester pregnancy ultrasound. Emergency physicians are required to correctly perform and interpret a minimum of 25 to 50 cardiac ultrasound exams upon residency graduation.[3]

Ideally, the patient’s bladder will be full, as it provides an acoustic window for visualizing the uterus. The patient should be lying supine on a stretcher with her abdomen exposed and towels tucked around the gown and undergarment edges to keep them dry from the ultrasound gel. For dominant right-hand operators, the ultrasound machine should be positioned at the patient’s anatomic right, plugged in (if applicable) and turned on. The lights should be dimmed if possible.[11]

A transabdominal pelvic ultrasound should always be performed before a transvaginal ultrasound. The patient’s bladder should be as empty as possible before performing a transvaginal ultrasound, to allow the probe to get as close to the uterus and adnexa as possible. To allow adequate visualization of an anteverted uterus, the patient should be positioned in a stretcher with stirrups and her pelvis at the edge of the stretcher, or her pelvis should be elevated approximately 8 cm to 10 cm with an upside-down bedpan and two to three folded chucks.[11]

A low-frequency convex probe is best for a transabdominal pelvic ultrasound. Alternatively, a phased array probe can be used if a convex probe is not available. The settings on the ultrasound machine should be set to "obstetrics" or “pregnancy.” The first view should be a sagittal view through the uterus. The convex probe is placed just superior to the pubic symphysis, with the indicator directed superiorly. The footprint should be directed slightly inferiorly. Structures closest to the probe appear at the top of the screen, and structures further away appear toward the bottom of the screen, so in this view, the top of the screen is anterior, and the bottom of the screen is posterior. The left of the screen represents the direction the indicator is pointing toward, which in this view is superior or cephalad, and the right of the screen is inferior or caudad. The bladder, if full, will take up most of the anterior (top) portion of the screen, ending just superior to the pubic symphysis on the right of the screen. Posterior to the bladder is the vaginal stripe, a hyperechoic line starting at the inferior (right) side of the screen and leading to the cervix and uterus. Fanning to the right and left until the uterus disappears in both directions allows for a complete view of the uterus. If a gestational sac is visualized, interrogation for a yolk sac or fetal heartbeat within the gestational sac, as well as measurement of the thinnest endomyometrial mantle around the gestational sac should take place to confirm the presence of an IUP. If there is a fetal heartbeat, Motion-Mode (M-mode) should be employed to calculate the fetal heartbeat. When selecting M-mode, move the M-mode line to where it crosses through the flicker of the fetal heartbeat before graphing the motion across that line over time. A regular pattern of peaks and troughs should trace out on the screen. Freeze that image and use your calculations menu to select the most appropriate calipers for calculating the fetal heartbeat. By placing your calipers at the start of one peak to the start of the next, the machine should calculate the fetal heart rate based on that distance. Some machines require that the calipers be placed over two beats (start of one peak to the start of the second peak after that peak) to calculate an average fetal heart rate.

After interrogating for an IUP as well as for free fluid in the Pouch of Douglas, rotate your probe 90 degrees counterclockwise to visualize the uterus in a transverse (more accurately, coronal) plane, where the top of the screen is still inferior, the bottom of the screen is superior, the left of the screen is the patient’s right, and the right of the screen is the patient’s left. In this plane, the uterus tapers on either side where the fallopian tubes take off. On ultrasound, it is difficult to appreciate the fallopian tubes unless there is a tubal ectopic, or fluid within the tubes (hydrosalpinx or pyosalpinx). However, the areas where the uterus tapers in size on either side are called the cornua. The ovaries typically sit between the cornua and the more lateral iliac vessels and are slightly more hypoechoic than the uterus. After locating the cornua with the indicator pointing toward the patient’s right side, and the footprint steered toward the patient’s right side, fan anteriorly and posteriorly until either an undefined hypoechoic area or a defined ovary with anechoic follicles is appreciated. If an undefined hypoechoic area is seen, apply gentle pressure with the probe until an ovary comes into view. Typical ovarian dimensions are 1.5 cm x 1.5 cm x 3 cm. A simple ovarian cyst is 2.5 cm or greater, whereas a follicle is smaller than 2.5 cm. A corpus luteum cyst, which tends to have a thicker wall than a simple cyst, is frequently appreciated in the first 12 weeks of pregnancy.[11]

Pelvic ultrasound, like most diagnostic ultrasound applications, is associated with little if any risk. There may be some associated discomfort when pressure is applied to the probe both in transabdominal and transvaginal views.

Pelvic ultrasound is a rapid, inexpensive, safe application that expedites the diagnosis of intrauterine pregnancy. [12]Pelvic ultrasound can also expedite management in the setting of a ruptured ectopic pregnancy when free fluid and NDIUP is present.[9]

Pregnany is managed by an interprofessional team that includes nurses and pharmacists. It is important for healthcare workers to know that an obstetric ultrasound is a useful technique for identifying several pregnancy related pathologies. The technique is portable, does not use contrast and can be performed at the bedside. 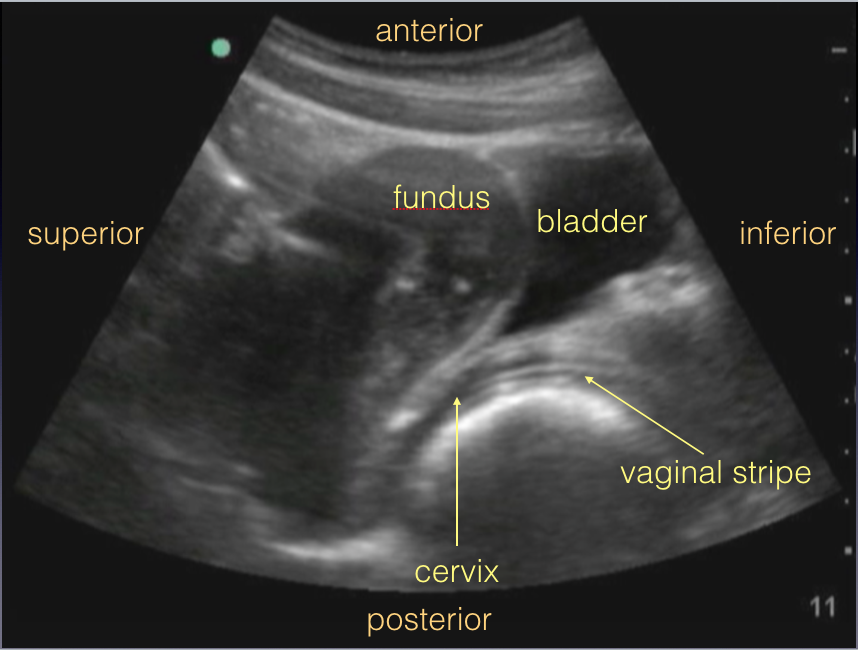 Doubilet PM, Should a first trimester dating scan be routine for all pregnancies? Seminars in perinatology. 2013 Oct;     [PubMed PMID: 24176152]