Notalgia paresthetica is a chronic neuropathic dysesthesia typically seen in older females. It presents unilaterally and is characterized by pruritus over the medial aspect of the inferior scapula lasting from months to years. There are no primary cutaneous lesions, only secondary changes due to chronic scratching. Due to its relative rarity and benign nature, few studies have been done on this condition. However, irritation or damage to thoracic nerves two to six have been implicated as causative, though the exact location of damage has not been elucidated. This activity describes the risk factors, evaluation, and management of notalgia paresthetica and highlights the interprofessional team's role in enhancing care delivery for affected patients.

Notalgia paresthetica is a chronic neuropathic dysesthesia of unknown etiology characterized by pruritus located on the medial border of the inferior scapula. The condition has been first described by the Russian neurologist Michail Astwazaturow in 1934 and is usually benign in nature. [1][2] Irritation or damage to thoracic nerves two to six have been implicated as causative, but the exact location of damage has not been elucidated. Most studies attribute a thoracic polyradiculopathy due to spinal nerve compression as the primary etiology behind the pruritus.[3]

Others state the anatomical angle of sensory nerve fiber penetration through the surrounding muscle is the cause. Notalgia paresthetica is typically seen in older females, is unilateral, and can last for months to years. There are no primary cutaneous lesions, only secondary changes due to chronic scratching. Diagnosis through history and physical is typically sufficient, but occasionally further imaging may be required. Treatment remains disappointing, and oral neurologic modulators, such as gabapentin, are reported to be the most efficacious therapy.[2][4][5][6][7][8]

Many reports state a thoracic polyradiculopathy of posterior rami of T2 to T6 as the primary cause due to suggestive radiographic findings in some patients with notalgia paresthetica. Numerous causes of unilateral thoracic nerve impingement have been reported, with the most common being degenerative vertebral changes and herniated intravertebral discs. Other causes include osteoarthritic lesions with resulting kyphosis and vertebral hyperostosis. Professionals who criticize the radiculopathy theory state that radiculopathy would result in symptoms with a dermatomal pattern not just in an isolated area, which is seen in notalgia paresthetica.

Peripheral etiologies of notalgia paresthetica are abundant and can be classified into physical, anatomical, genetic, metabolic, and infectious. Physical causes include muscle spasms that are thought to compress cutaneous and itch sensitive nerves resulting in aberrant firing. Some authors attribute the anatomical angle the peripheral histamine-sensitive nerves pierce the multifidus spinae muscles.[4] This angle is thought to predispose them to irritation by normal muscular contraction and muscle spasms. Physical therapy is believed to change the tone of the paraspinal muscles and alter the angle, leading to decreased nerve irritation, and therefore pruritus. Other less common causes include genetic causes like MEN2A, metabolic disorders, such as type-II diabetes mellitus, and infectious etiologies like herpes zoster.[9]

Chronic pruritus is a broad category with multiple etiologies and a lifetime incidence of over 20%. Notalgia paresthetica falls in the subcategory of chronic neuropathic pruritus, a subcategory which is thought to constitute approximately 8% of all cases of chronic pruritus. Notalgia paresthetica does not have a racial predilection for other pruritic neuropathic syndromes such as brachioradial pruritus, which favors those with lighter skin tones.[10] Notalgia paresthetica is typically a unilateral disease, often present on the contralateral side of the dominant hand. The majority of the population is right hand dominant. Therefore, a left-sided parascapular pruritus that the patient can reach with their dominant hand is highly suggestive of notalgia paresthetica. Females are reported to be affected more than males, but small study sizes may be misleading.

The sensation of itch is thought to be a complex process involving sensitive neurons and adjacent cellular mechanisms that modulate it. Dysregulation of this process leads to aberrant firing of itch-transmitting nerve fibers without a typical itch-provoking physical stimulus, a disorder known as alloknesis.[11] Itch is thought to be transmitted along at least two different types of nerve fibers. Small unmyelinated histamine-sensitive nerve fibers, known as C-fibers, are thought to be the primary transmitters of itch.[12] Other nerve fibers are thought to transmit both itch and pain. The second bifunctional nerve fiber may explain why some patients with notalgia paresthetica experience other sensations such as paresthesia and allodynia in addition to pruritus. Additionally, itch-sensitive fibers may have closely coupled thermoreceptors, which may provide a link to why heat exacerbates pruritus. Notalgia paresthetica is most likely a multifactorial process involving a combination of physical nerve irritation and a dysregulated itch control mechanism.[13][14][15]

Histopathological hallmarks of notalgia paresthetica include post-inflammatory melanosis, hyperkeratosis, and an inflammatory melanophage dermal infiltrate.[16] Additionally, amyloidosis is seen, but this is most likely due to chronic scratching with keratinocyte damage leading to keratin degradation into amyloid. Some authors report increased nerve fiber density seen with S-100 stains, whereas others report no change or decrease in the nerve fiber density.[17] Biopsies are usually not required to make a diagnosis but can help rule out other conditions such as contact dermatitis, patchy parapsoriasis, early cutaneous amyloidosis, and tinea versicolor.

Like other neuropathic causes of chronic pruritus, notalgia paresthetica lacks a primary cutaneous lesion. Secondary lesions, such as hyperpigmentation and lichenification, can be visualized in patients with long-standing pruritus. Deep excoriations are considered to be virtually pathognomonic for chronic pruritus of neuropathic origin. It is nearly impossible to resist scratching a severely pruritic lesion.

Patients may scratch the lesion while they are distracted or asleep, resulting in a worsening of symptoms. Because the pruritus is typically located on the lower two-thirds of the scapula contralateral to the dominant hand, Apley's scratch test is considered a rudimentary exam for notalgia paresthetica. Apley's scratch test is primarily used to evaluate the shoulder’s range of motion and contains three maneuvers.[18] One maneuver is adduction and internal rotation, which corresponds with reaching behind the back to touch the inferior angle of the contralateral scapula. Patients with notalgia paresthetica should be able to perform this maneuver.

Further evaluation beyond history and physical are rarely necessary for most cases of notalgia paresthetica. Imaging studies such as X-rays, computed tomography, or magnetic resonance imaging are not required to establish a diagnosis. Imaging may be appropriate in patients presenting with additional musculoskeletal or neurological complaints. Thus, the diagnosis of notalgia paresthetica is primarily through a thorough history and physical examination.

There are a wide variety of treatment options for notalgia paresthetica. Oral and topical medications, botulinum toxin A, transcutaneous electrical nerve stimulation (TENS), and physical therapy have been used with varying levels of success. Before treatment, be sure to reassure the patient and explain that their condition is benign. Often, this provides enough relief, and patients with mild or intermittent pruritus may require no treatment.[19][20]

The most common method of treatment for notalgia paresthetica is an oral agent. Oral medications that target gamma-amino-butyric acid (GABA), serotonin, histamine, and inflammation have been investigated. Gabapentin, which targets GABA, has been reported to be the most efficacious medication in reducing pruritus. Patients with notalgia paresthetica treated with gabapentin may report mild gastric discomfort, but this usually does not result in discontinuation of the medication.[21] Antihistamine medications surprisingly do not provide significant relief of pruritus; however, the sedative effects of first-generation antihistamines may help reduce paroxysmal nocturnal or distracted scratching. Oral medications that target serotonin and inflammation are less effective.

Topical medications include capsaicin, steroids, anesthetics, amitriptyline/ketamine, and doxepin.[22][23] Capsaicin is the most commonly reported topical medication and can be applied as a cream, gel, lotion, solution, and patch in a wide variety of concentrations. Topical capsaicin can provide immediate relief, but the duration of action varies considerably. Additionally, patients may experience a burning sensation with topical capsaicin use. In a small study, capsaicin was found to be less effective than gabapentin in the treatment of notalgia paresthetica.[23]Topical steroids vary in effectiveness and are not useful unless inflammation is present. Anesthetics provided temporary relief and are not widely used. Amitriptyline/ketamine and doxepin are also not widely used.

Like all other treatments in notalgia paresthetica, botulinum toxin A has varying reports of success. Early reports suggest botulinum toxin was a viable option with significant improvement in the patient's reported itch. Later studies attempted to replicate these findings, but little to no improvement was reported.[24]

Treatment with TENS was reported to be successful in a Turkish study of notalgia paresthetica.[25] TENS units are usually used in the treatment of neuropathic pain. One afferent itch pathway is postulated to transmit both itch and pain, which is the most likely TENS target. A small study using TENS for 20 minutes five times a week resulted in a 60% reduction of itch in one-third of patients. In the same study, one-fifth of the patients treated with TENS reported no change, and one reported worsening of their pruritus while using TENS. Because notalgia paresthetica can present with other neuropathic symptoms such as pain, tingling, and numbness in addition to itch, TENS may be a particularly effective treatment for patients experiencing multiple neuropathic sensations.

Referral to a specialist for further workup should be reserved for patients with recalcitrant pruritus or those with related musculoskeletal or neurological symptoms in addition to notalgia paresthetica.

Conditions that can be mistaken for notalgia paresthetica include:

Irrespective of the approach, notalgia paresthetica generally does not remit entirely, although it can be controlled and complete remission is possible. While not life-threatening, the cutaneous symptoms of notalgia paresthetica often adversely affect the patient's quality of life, resulting in discomfort and inconvenience for affected patients.[27]

Patients need to understand that notalgia paresthetica is not uncommon and rather benign, but that remittance is uncertain and may only occur after a very long time. They should be encouraged to comply with all treatments, including emollients, steroids, anesthetics, and to remain compliant even with an apparent lack of tangible results.[28][27]

Other localized conditions with sensory changes/paresthesia include:

The diagnosis and management of notalgia paresthetica are difficult and requires an interprofessional team that includes a neurologist, internist, dermatologist, primary care provider, pharmacist, and a pain management nurse. The diagnosis is not simple, and many other pain disorders have first to be ruled out. In many cases, consultation with other team members is required to make the correct diagnosis.

There are a wide variety of treatment options for notalgia paresthetica. Oral and topical medications, botulinum toxin A, transcutaneous electrical nerve stimulation (TENS), and physical therapy have been used with varying levels of success. [Level 4] Before treatment, be sure to reassure the patient and explain that their condition is benign. Often, this provides enough relief, and patients with mild or intermittent pruritus may require no treatment. Pharmacists should review prescriptions, check for drug interactions, and educate patients about potential side effects. Dermatology nurses participate in patient education and arrange for follow up.

Like all other treatments for notalgia paresthetica, botulinum toxin A has varying reports of success. Early reports suggest botulinum toxin was a viable option with significant improvement in the patient's reported itch. Later studies attempted to replicate these findings, but little to no improvement was reported. (Level IV) Referral to a specialist for further workup should be reserved for patients with recalcitrant pruritus or those with related musculoskeletal or neurological symptoms in addition to notalgia paresthetica. 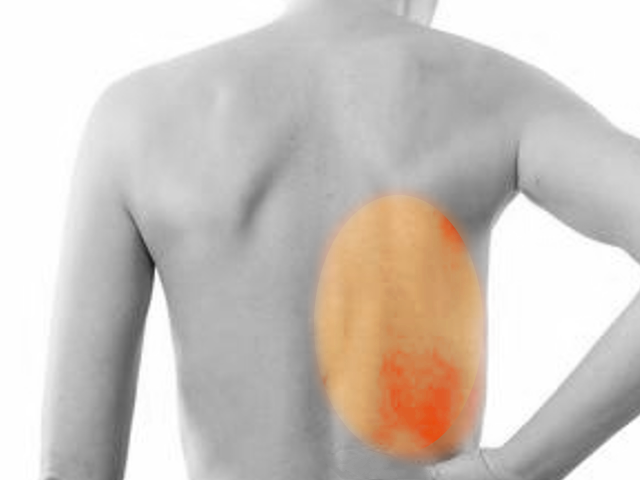