Non-depolarizing, neuromuscular blocking drugs (NMBDs) work by competing with acetylcholine (Ach) for binding sites on nicotinic alpha subunits. They produce skeletal muscle relaxation for endotracheal intubation, reduce patient movement to optimize operating conditions, and have been shown to improve compliance with mechanical ventilation. Since muscle relaxants lack analgesic or anesthetic properties, they should not be used without anxiolytic or hypnotic agents or in inadequately anesthetized patients due to increased risk of awareness during general anesthesia. This activity outlines the indications, mechanism of action, methods of administration, important adverse effects, contraindications, monitoring, and toxicity of non-depolarizing, neuromuscular, blocking drugs, so providers can direct patient therapy to optimal outcomes in anesthesia and other conditions where non-depolarizing, neuromuscular blocking drugs have therapeutic benefit.

The introduction of muscle relaxants has revolutionized the practice of anesthesia. By the end of the 1950s, non-depolarizing, neuromuscular blocking drugs (NMBDs) d-tubocurarine and gallamine were available.[1] Although these two relaxants are no longer in use, several newer NMBDs have emerged over the last 20 years with safer side effect profiles.[2]

Non-depolarizing NMBDs work by competing with acetylcholine (Ach) for binding sites on nicotinic alpha subunits. They produce skeletal muscle relaxation for endotracheal intubation, reduce patient movement to optimize operating conditions, and research has shown them to improve compliance with mechanical ventilation. Notably, there has yet to be a non-depolarizing NMBD developed that can work faster than the rapid-onset, depolarizing muscle relaxant succinylcholine. However, onset can accelerate by using larger initial dosing of some non-depolarizing NMBDs, for example, rocuronium. Since muscle relaxants lack analgesic or anesthetic properties, they are not for use without anxiolytic or hypnotic agents or in inadequately anesthetized patients due to increased risk of awareness during general anesthesia.[3]

The Ach receptor housed within the post-junctional motor neuron cell membrane is comprised of five glycoprotein subunits: two alpha subunits, and one each of beta, gamma, and epsilon. The arrangement of these subunits is in a cylindrical fashion with the center containing an ion channel. When Ach binds to the two alpha-subunits, there is ion flow through the central ion channel with subsequent depolarization of the motor neuron. A non-depolarizing NMBD is a quaternary ammonium compound with positively-charged nitrogen that imparts an affinity to nicotinic Ach receptors. It only needs to bind one of the two alpha subunits to block Ach, thus preventing depolarization and producing muscle relaxation.[4]

Weight-based dosing scalars are important because administration based on total body weight may result in overdose while dosing based on ideal body weight may be sub-therapeutic. Recommendations are that non-depolarizing NMBDs are dosed based on ideal body weight to avoid prolonged paralysis.[7] Intravenous (IV) injection is the most common mode of delivery, although intramuscular (IM) injections may be possible for some non-depolarizing relaxants. The 95% effective dose (ED95) for NMBDs specifies the dose that produces 95% twitch depression in 50% of individuals. One to two times the ED95 dose for a particular non-depolarizing NMBD is the typical dose administered for intubation.[8][9]

A provider’s choice of non-depolarizing NMBD depends on the desired speed of onset, duration of action, route of elimination, and side effects. For instance, muscle relaxants with a rapid onset (i.e., rocuronium) and brief duration may be desirable when endotracheal intubation is the reason for paralysis. On the other hand, a longer-acting agent like pancuronium may also produce intubating conditions in 90 seconds, but at the cost of pronounced tachycardia within the patient and a block that may be irreversible by an acetylcholinesterase inhibitor (for over 60 minutes), increasing the risk of postoperative pulmonary complications.[10] The table below displays the characteristics of various non-depolarizing NMBDs.[8][9]

Other notable side effects are drug-specific. Pancuronium may cause tachycardia and hypertension due to its vagolytic mechanism on nodal cells mediated through muscarinic receptors. Laudanosine, a metabolite of atracurium and cis-atracurium, may accumulate and cause central nervous system stimulation with resultant seizures. Finally, in critically ill patients, long-term infusions of non-depolarizing NMBDs, particularly aminosteroids, can lead to profound weakness, termed critical illness polymyoneuropathy (CIP).[13]

Prior hypersensitivity reactions and inadequate sedation are contraindications. The provider should also consider the metabolism of certain non-depolarizing NMBDs. Only pancuronium and vecuronium are metabolized to any significant degree by the liver (deacetylation), and thus caution is advised in hepatic failure. Vecuronium and rocuronium undergo biliary excretion and may accumulate to toxic levels in extrahepatic biliary obstruction. Relaxants that primarily undergo renal excretion (e.g., doxacurium, pancuronium, pipecuronium) are to be avoided in renal failure. Atracurium and cisatracurium are unique NMBDs because they undergo spontaneous degradation via Hofmann elimination. The metabolism of mivacurium is via plasma pseudocholinesterase, similar to succinylcholine.[8]

Patients who have received NMBDs require continuous pulse oximetry, cardiac monitoring, and end-tidal carbon dioxide monitoring. Peripheral nerve stimulation works to measure the depth of neuromuscular blockade. Typically, the ulnar and facial nerves are stimulated for monitoring. Neuromuscular blockade generally occurs more rapidly in laryngeal adductors, diaphragm, and masseter than in the adductor pollicis. Utilizing the nerve stimulator, the train of four (TOF) commonly helps to assess blockade. It consists of four stimuli delivered at a frequency of 2 Hertz, and the ratio of the amplitude between the fourth to the first twitch response estimates the degree of the block. About 75% of Ach receptors become antagonized when the fourth twitch from TOF disappears, 85% receptor occupancy occurs when the third twitch disappears, 90% receptor occupancy occurs when the second twitch disappears, and 95% to 100% receptor occupancy occurs when the first twitch disappears. Adequate relaxation for surgery is present when 1 to 2 twitches of the TOF are present.[16]

Other unique observations noted on the peripheral nerve stimulator when a non-depolarizing NMBD paralyzes a patient include a tetanic fade response, post-tetanic potentiation, potentiation of blockade by other non-depolarizing NMBDs, and antagonism of the block by acetylcholinesterase inhibitors. Since TOF is user-dependent and introduces a considerable margin of error, other modalities are also available, including acceleromyography, strain-gauge monitoring, and electromyography.[17][18]

After the reversal of neuromuscular blockade, a thorough evaluation of muscle strength is necessary. A TOF ratio of 0.9 is the usual recommendation, although the visual estimation of TOF may not be accurate. A sustained tetanic response, the ability to lift one’s head for 5 to 10 seconds, and good grip strength also suggest an adequate recovery.[19]

Higher than recommended dosing, for example, based on total body weight, may cause prolonged paralysis beyond the time required for surgery; this may manifest with generalized weakness, decreased respiratory reserve, and even apnea.[20] The management of toxicity should focus on airway maintenance and respiratory support to maintain oxygenation until the NMBD undergoes metabolism. As mentioned, non-immunologic histamine release is dose-dependent and may lead to significant hypotension and possibly bronchospasm if utilizing toxic doses.

Reversal of the NMBD can be done with anticholinesterase medications such as neostigmine or endrophonium.  These anticholinesterase medications must be accompanied with an anti-cholinergic medication such as glycopyrrolate or atropine to block the ACH activity at the muscarinic receptors.  Rocuronium specifically can be reveresed with sugammadex, offering a more rapid onset of reversal than neostigmine and without the muscarinic side effects.  However, sugammadex may interfere with oral contraceptive efficacy and an alternative form of contraception is recommended for the week following administration.[21]

Healthcare workers, including the nurse anesthetist, anesthesiologist, emergency medicine physician, and critical care specialist, who use neuromuscular blockers, must closely monitor all patients. These agents are usually administered to intubated patients, and hence, airway maintenance and respiratory support are vital. Muscle strength should undergo a regular assessment to determine if the drug's action has diminished. Pharmacists should also verify the agents and dosing when ordered outside the operating room. It is prudent to assign one individual whose sole responsibility is monitoring the patient's vitals and other signs associated with NMBD use. This would be the anesthesia provider inside the operating room.  Any issues need to be reported to the surgeon or anesthesiologist immediately. Only through this type of collaborative care can the interprofessional healthcare team ensure that these agents are used safely and appropriately to direct patient outcomes optimally. [Level 5] 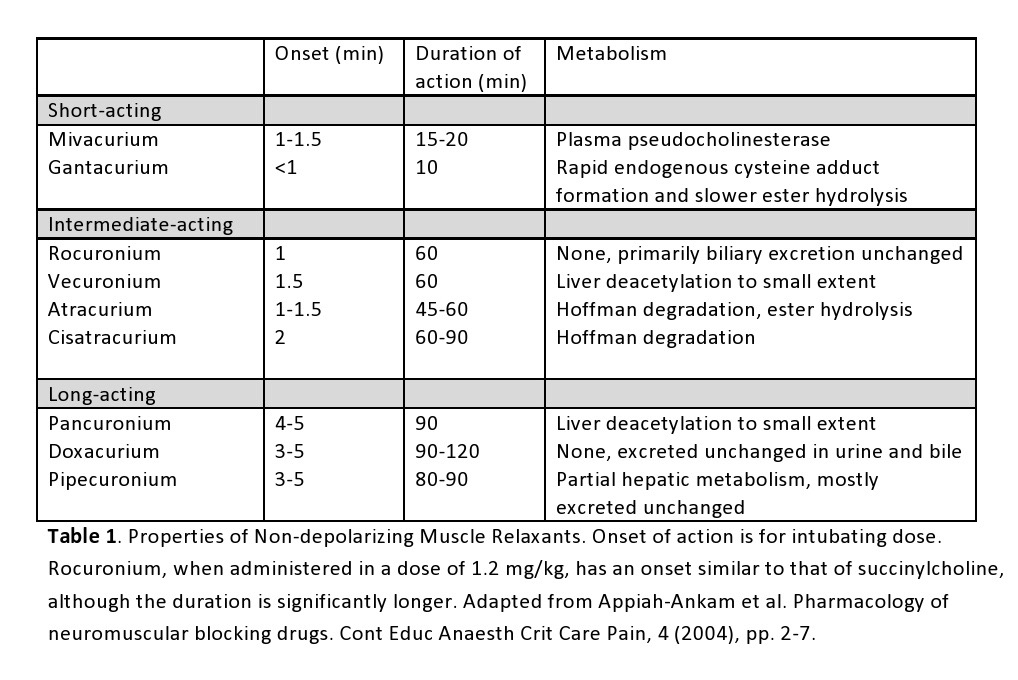 Corda DM,Robards CB, Sugammadex and Oral Contraceptives: Is It Time for a Revision of the Anesthesia Informed Consent? Anesthesia and analgesia. 2018 Feb     [PubMed PMID: 29200078]