Clubbing of the nails is soft tissue swelling of the terminal phalanx resulting in flattening of the angle that exists between the nail bed and the nail. Clubbing typically occurs in combination with other dermatologic and skeletal findings but can also less commonly occur in isolation. Although clubbing can present in many pathologic conditions, it can be idiopathic or familial. This activity reviews how to properly evaluate nail clubbing, when patients with nail clubbing should receive additional evaluations and the role of the interprofessional team in caring for patients with nail clubbing.

Clubbing of the nails is soft tissue swelling of the terminal phalanx resulting in straightening of the angle that exists between the nail bed and the nail.[1] The association of clubbing of the fingers with an underlying disease was known since the time of Hippocrates. Clubbing occurs in combination with other dermatologic and skeletal findings but can also less commonly occur in isolation. Although clubbing can present in many diverse conditions, it can be idio­pathic or familial; the familial form frequently transmits as a dominant trait.

There are several causes of acquired nail clubbing which include infectious, neoplastic, inflammatory, and vascular diseases.[2]  Isolated nail clubbing can be a benign hereditary condition but given the multiple associated conditions underlying etiology should be ruled out.

The incidence can be difficult to estimate given the numerous underlying etiologies. Further, not all patients with an underlying disease have the clinical manifestation of digital clubbing. In general, clubbing is seen in roughly 1% of all internal medicine admissions and is associated with serious underlying disease in 40% of those patients.[3]

Of the etiologies in adults, the most common pulmonary cause of clubbing is lung malignancy.[4]  Of the several different types of thoracic malignancy, 80% of these cases of clubbing are caused by lung cancer, while pleural tumors contribute to roughly 10%, and other intrathoracic and mediastinal growth account for 5% of cases.[4]  Despite being such a predominant cause of clubbing, clubbing is prevalent in only 5% to 15% of lung cancer patients.[4]  The prevalence of clubbing in other conditions like interstitial lung disease, cardiovascular disease, gastrointestinal disease, infectious disease, and other cancers has been reported but shows significant variation.

Patients with clubbing may also have hypertrophic osteo­arthropathy, a condition that characteristically presents with the subperiosteal formation of new cancellous bone at the distal ends of long bones, in particular, the radius and ulna and the tibia and fibula. Hypertrophic osteoarthropathy is almost always associated with clubbing, particularly in patients with bronchogenic carcinoma, other intrathoracic malignancies, and cystic fibrosis.

Multiple hypotheses have been proposed over the years in the attempt to describe the pathophysiology of clubbing. The main pathologic finding in clubbing is increased cap­illary density. The increased release of platelet-derived growth factor (PDGF) and vascular endothelial growth factor (VEGF) from peripheral megakaryocytes leads to increased vascularity, permeability, and ultimately connective tissue changes. The release of both PDGF and VEGF is thought to be enhanced by hypoxia.[5][6]

Shunting of blood past the capillary bed of either the lung or the liver, which suggests that a lack of metabolism of angiogenic factors that bypass a critical organ may be involved.

A proper history and physical exam are key to the evaluation of digital nail clubbing especially given the numerous etiologies of this physical exam finding. While conducting the patient interview, it is crucial to identify the symptoms the patient has which will guide and narrow your differential diagnosis. It is important to remember that not all patients with clubbing have an underlying pathological disease and not all with a disease will have the manifestation of digital clubbing.

Equally, it is just as important to note that clubbing itself has a large degree of variation. The assessment of clubbing by physical exam is subjective and is not always reliable, especially if the clubbing is minimal and not severe.

The most widely known physical exam sign of clubbing is the profile sign also known as Lovibond angle. The Lovibond angle is the angle found between the proximal nail fold and the nail at the location at the exit of the nail from the nail fold. Usually, this angle is less than 180 degrees in normal individuals. True digit clubbing usually can be therefore differentiated from simple nail curving when the angle is greater than 180 degrees.

The phalangeal depth ratio, which is the ratio of digit’s depth measured at the nail and the distal interphalangeal joint, is another objective criterion used to assess clubbing. The depth at the DIP joint is normally greater than that of the nail. A ratio of greater than 1, therefore, supports clubbing.

In 1976, Schamroth reported a clinical sign associated with clubbing demonstrating obliteration in clubbed fingers of the diamond-shaped window normally produced when the dorsal surfaces of the corresponding finger of each hand are opposed and now called Schamroth sign.

Of these features, the nail cuticle angle straightening appears to be the most sensitive measurement.[2]

The evaluation of digital clubbing is primarily during initial patient evaluation. A thoroughly taken history including attention to characteristic features of the many possible etiologies of clubbing should be taken into account. The history is followed by the physical exam where digital clubbing is assessed based on the features mentioned above, and measurements. Acquired clubbing is most often associated with pulmonary or cardiovascular diseases so obtaining chest radiography is very reasonable during initial workup. If plain films demonstrate no abnormality, a CT scan is a next step to look for a pulmonary neoplasm or other lesions which may still be localized and curable.

Treatment and management of digital clubbing are not focused on the clubbing finding itself but rather on the underlying etiology behind clubbing if it exists. Response to treatment will have a significant degree of variation depending on the underlying disease process. Data for the reversibility of clubbing is sparse. Clubbing reversibility has been reported in particular in patients undergoing prostaglandin therapy for liver disease who developed clubbing which reversed with the cessation of therapy.[1]

Metabolic diseases such as thyroid acropathy and severe secondary hyperparathyroidism too may present with the finding of clubbing.

As with the treatment and management of digital clubbing, the prognosis is highly dependent on the underlying etiology. If the etiology is reversible, then clubbing will reverse. But if the condition is chronic or associated with a malignancy, clubbing is long term.

Clubbing as an individual entity results in aesthetic changes which can lead to complications especially surrounding the psychosocial aspects of everyday life. Although the data is sparse, reports indicate that acquired clubbing is reversible with successful treatment of the underlying condition.[8] Furthermore, it is vital to establish the etiology of clubbing as the underlying condition responsible may itself result in further complications if left untreated.

Patients, in general, benefit greatly from adequate information provided to them by healthcare workers, especially regarding a condition they may have. As with other medical conditions, information on clubbing should be given to patients, and they should be encouraged to ask questions to prompt further their insight into their situation. When acceptable, patients should receive reassurance especially if the cause of their clubbing is not due to the underlying pathology.

Nail clubbing is a physical exam finding that often correlates with a serious underlying disease. Proper recognition of clubbing, therefore, plays a vital outcome in the progression of the disease. The initial physical exam in the case of clubbing may be at either an inpatient or outpatient setting depending on the underlying cause. Clubbing is identifiable by anyone conducting the physical exam including medical students, nurses, nurse practitioners, physician assistants, and physicians. Regardless of who recognizes the clubbing first, an interprofessional team approach is the ideal way to evaluate and manage a patient with clubbing.

In many cases, depending on the underlying cause of the clubbing, evaluation by specialists may be required. These include pulmonologists, oncologists, infectious disease specialists, cardiologists, gastroenterologists, endocrinologists, and/or radiologists. Cases where clubbing results in increased stress due to impaired physical appearance may warrant intervention from a behavioral therapist.

Only through such a team approach can the diagnosis be confirmed. 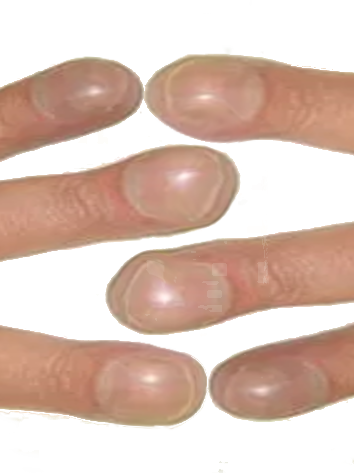