Menkes kinky hair disease is a rare X-linked recessive progressive multisystemic disease of copper metabolism. Patients usually exhibit a severe clinical course with death in early childhood. Early diagnosis of Menkes disease is clinically very challenging because of the subtle clinical features and nonspecific biochemical markers. Accurate diagnosis is important both for proper management to reduce morbidity and mortality and also for parental counseling and prenatal diagnosis. This activity reviews the pathophysiology, clinical features, evaluation, and treatment of Menkes disease; and highlights the role of the interprofessional team in the management.

Mutation in the ATP7A gene located in xq21.1 causes Menkes disease. So far, about 357 different mutations, including insertions, deletions, partial deletion, missense mutations, and splice mutations, have been identified in the ATP7A gene.[2] Genetic studies indicate that mothers of 75% of patients are carriers, and the remaining 25% are not. There is no apparent correlation between mutations and the clinical course. As expected, most of the patients are male, but few female patients have been reported. It is most likely due to X autosome translocation where normal X is preferentially inactivated. Other causes being point mutation and skewed inactivation of the normal X chromosome.[3]

The incidence of Menkes disease is close to 1 in 35,000 live male births.[2] Females are usually carriers, but cases have been reported due to unusual genetic circumstances. The incidence in Australia is much higher (1 in 50,000 to 1 in 1,00,000), which may be due to the founder effect.[3]

ATP7A gene encodes ATP7A, which is an active copper transporter. ATP7A is a transmembrane protein predominantly expressed in enterocytes, placenta, and central nervous system, where at steady state, it directs Cu to Cu-dependent enzymes. In low to normal copper states, the ATPase is localized in the Trans Golgi Network (TGN), where it is retained by Acetyl-CoA transporter 1. In the TGN, ATP7A transfers copper from the cytoplasm into the Golgi complex for the metalation of multiple cuproenzymes. Whereas if the copper levels are high, it effluxes out of the cell by relocating to the plasma membrane.

The clinical features of MD are either a direct consequence of enzyme dysfunction or secondary to an inability to load these enzymes with Cu.[4] The failure of ATP7A in the enterocytes leads to subsequent failure of the efflux pump and causes excessive Cu accumulation in the enterocytes with generalized Cu deficiency. The enzymes which require copper for important biochemical functions include cytochrome C oxidase, dopamine beta-hydroxylase,[5] lysyl oxidase, tyrosinase, superoxide dismutase, and peptidyl glycine alpha amidating monooxygenase.[6] The deficiency of cytochrome oxidase affects cellular respiration and causes CNS degeneration and ataxia. Autonomic symptoms, including hypotension and hypothermia, are due to abnormal catecholamine synthesis from deficient dopamine beta-hydroxylase. Menkes disease also exhibits marked connective tissue abnormalities, including skin, joints, and bone abnormalities, and impaired blood vessel integrity due to the absence of lysyl oxidase and defective cross-linking of collagen and elastin. Skin hypopigmentation and hair abnormalities are due to abnormal tyrosinase and sulfhydryl oxidase, respectively.

Profound neurological features are due to low Cu in the brain. Likely explanations include:

Histopathological findings in both hair and brain have been described in Menkes disease. Findings of hair on light microscopy include pili torti (180 degrees twisted on-axis), monilethrix, and trichorrhexis nodosa. The internal elastic lamina is fragmented with the proliferation of the intimal layer.[8]

Neuropathological changes in the brain include striking cortical neuronal loss, mineralized neurons, gliosis, subcortical myelin loss associated with severe axonal degeneration, and widespread atrophy of grey and white matter present. Light microscopy findings include focal degeneration that extends to all layers of the cerebral cortex with more prominent neuronal loss in the hippocampus, striatum, hypothalamus, and thalamus. Granular neurons are severely depleted in the cerebellum with relative preservations of Purkinje cells, which differentiate this from other neurodegenerative conditions. Purkinje cells branch in the molecular pattern forming cactus-shaped extensions. The neuropathological changes are largely due to the deficiency of cytochrome C oxidase.[9][10]

Neonatal Menkes disease is often missed because of the more nonspecific clinical and biochemical findings. The patient may present with hypoglycemia, hypothermia, prolonged jaundice, cephalohematoma, and pectus excavatum at birth. Characteristic hair findings are often absent, and microscopic findings of hair are not evident in the early phase of life. A definite diagnostic test, copper egress in cultured fibroblast, takes several weeks to result, so a more rapid, reliable test that diagnoses the patient before the onset of symptoms is critical. Such newly recognized tests include plasma catecholamine analysis and placental copper concentrations.

Neurological manifestations are the most common and characteristic of Menkes disease. Developmental regression and seizures are usually the first to start around 2 to 3 months.[14] Infection or febrile state triggers the onset of seizures. The disease can present in other ways like nonconvulsive seizures and recurrent episodes of apnea. The evolution and progression of seizures in Menkes disease follow three different stages. The early-stage usually manifests at 2 to 3 months as focal clonic seizures leading to status epilepticus, usually in the setting of fever. Fluctuating disturbance in the blood supply related to the tortuosity of vessels may be the cause. The intermediate stage typically starts with a mean age of 9.5 months as an intractable infantile spasm. A likely explanation would be neuronal degeneration in the subcortical structures such as basal ganglia and thalamus. Late-stage presents at a mean age of 24 months with multifocal myoclonic seizures and tonic spasms due to progressive cortical degeneration.[15] Other hallmark findings include neuro regression. The patient develops motor skills to some extent, with no language skills. There is also an association with growth restriction and failure to thrive.

Connective tissue dysfunction and skeletal abnormalities are very common in Menkes disease. Tortuous blood vessels and fluctuating blood supply are one of the well-established causes of seizures. Internal jugular vein dilatation or phlebectasia and aneurysm of brachial arteries have been reported.[16] The defective connective tissue formation also manifests as loose, wrinkled skin. Motor development is also delayed secondary to muscular hypotonia and other connective tissue disorders. Bone deformities include wormian bones in the skull, pectus excavatum or pectus carinatum, osteopenia, and long bone fractures. Metaphyseal fractures, rib, and skull fractures in these patients are often misdiagnosed as child abuse. Pamidronate treatment has been found to be effective in increasing bone mineral density and in the management of osteoporosis.[17]

Urological complications are very frequent in MD, and the most common manifestation is bladder diverticula. Bladder diverticula often lead to frequent urinary tract infections, ascending infections, hydronephrosis, and renal parenchymal damage. Cases of renal rupture, vesicoureteric reflux, and cryptorchidism have been reported.[12] Recurrent infections and pneumonia are reported to be one of the common causes of morbidity and mortality in Menkes disease. It can be due to defective free radical clearance and diffuse pan lobular emphysema and cystic changes with abnormal pulmonary vascular development.

Biochemical evaluation plays a significant role in the diagnosis of Menkes disease. Serum copper and ceruloplasmin levels are typically low in Menkes disease in the range of 0-55 microgram/dl and 10-160 mg/dl, respectively, with the normal levels being 70 to 150 micrograms/dl and 200-450 mg/dl. These levels are typically low in babies less than six months. So, biochemical labs should never be interpreted alone without another testing. In this scenario, plasma catecholamine analysis indicative of dopamine beta-hydroxylase deficiency can be used as a rapid diagnostic test.

Features of hair on light microscopy are often very characteristic in the case of Menkes disease. It is important to examine as many strands as possible because every hair may not demonstrate typical morphological features.

Neuroimaging has a major role in establishing the diagnosis of Menkes disease. Cerebral atrophy and delayed myelination are the most commonly observed features on the MRI brain. (Fig.1A) Other features include subdural effusion, hematoma and hygroma, leukoencephalopathy, basal ganglia signal changes, and intracranial vessel tortuosity.[19][20] Focal tumefactive white matter lesions on MRI are especially seen before ten months of age. (Fig.1B) Hyperintense drop-shaped lesions in centrum semiovale, with restricted diffusion, also have been reported.[21] Cerebral infarctions can occur due to thrombotic occlusion and artery to artery embolism due to erratic and turbulent blood flow in a tortuous blood vessel. Extensive arterial tortuosity, in addition to the above findings, is highly suggestive of Menkes. (Fig.2A&B) These vascular changes are more prominent in MRA than routine MRI.[22][23]

EEG in Menkes follows three characteristic stages with the progression of the disease. Ictal findings in the early stage include slow spike waves and slowing in the posterior region, whereas interictal EEG shows multifocal polymorphic waves. The intermediate stage shows multifocal hypsarrhythmia with diffuse irregular slow and spike waves. The late-stage is characterized by multifocal high amplitude activity and mixed irregular slow waves.[24]

X-ray findings include generalized osteoporosis, metaphyseal flaring, and spurs in long bones. Periosteal diaphyseal reactions and thickenings are present. Rib fractures are often misdiagnosed as child abuse. Menkes disease should be considered as a differential diagnosis in infants with unexplained subdural hematoma in the absence of retinal hemorrhage.[25]

Molecular genetic testing includes single gene testing and multigene panels. The sequential analysis includes analyzing ATP7A followed by gene-targeted deletion/duplication analysis if no pathogenic variant found. Multigene panels can be customized by the clinician, including ATP7A and other genes of interest such as FBLN5 related cutis laxa and ELN related cutis laxa while limiting identification of variants of uncertain significance and variants that do not explain the underlying phenotype.[26]

Prenatal diagnosis is available for women with carrier state, including chorionic villi sampling and analyzing copper intake in the cultured fibroblast, especially if the genetic mutation is unknown. If there is an affected patient in the family with a known mutation, then specific genes can be tested.

Menkes disease is a fatal disease with death usually occurring between 6 months to 3 years. Treatment outcome depends on the severity of ATP7A gene deletion and residual functioning ATP7A protein.

The goal of the treatment is to provide copper to the copper-dependent enzymes. Early treatment of Menkes disease is essential (ideally within four weeks of life). Copper histidine component has been reported to be the most effective. Oral copper treatment is not effective because it gets trapped in the enterocytes. The subcutaneous or intravenous route is preferred. Neurodegeneration can be effectively reduced in some patients if the treatment is started at less than three weeks of age. Copper- histidine treatment can effectively reverse skin and hair changes, improving appendicular tone, weight gain, and achievement of socio-cognitive milestones. Outcomes also depend on the initiation of treatment and residual functioning ATP7A.[27][28] Significant secondary mitochondrial dysfunction is also noted to be common in untreated individuals and subsequently normalized, followed by corrections of serum copper in response to replacement therapy.

Menkes disease needs multiple specialists in the management of complications. For example, a feeding tube may be given to ensure proper nutrition, G tube for a patient with significant dysphagia, surgical correction for urological complications, seizure management with multiple antiepileptics. In addition to medical and surgical management, the patient needs extensive physical, occupational, and speech therapies. Orthopedic aids may improve symptoms due to connective tissue problems.

Occipital horn syndrome (OHS): OHS is the milder form of Menkes disease that usually manifests at 5 to 10 years of age with overlapping features of classical Menkes. At birth, infants present with hypothermia and prolonged jaundice. Connective tissue abnormalities are prominent in OHS, including umbilical and inguinal hernias. A characteristic feature of OHS is bony abnormalities of bones, typically symmetric exostoses from occiput. Neurological symptoms are less profound than Menkes, intellectual capabilities are usually low to borderline, and motor delays are secondary to hypotonia.[29]

Menkes disease has no specific curative treatment, and it is a progressive multisystem disease. Also, currently, there are no newborn screening programs available. Early diagnosis of Menkes disease is clinically very challenging because of the subtle clinical features and nonspecific biochemical markers. So high index of suspicion is required when evaluating a newborn with hypotonia, hypothermia, and jaundice, especially in the setting of significant family risk factors or connective tissue abnormalities because early replacement of copper reverses and prevents complications. 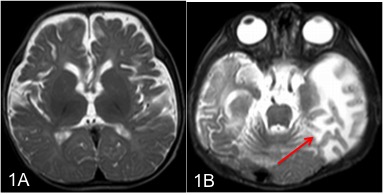 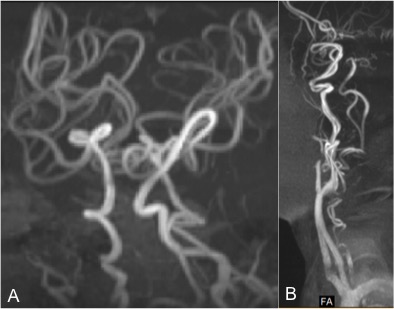