The median nerve is one of the five terminal divisions of the brachial plexus. The convergence of the lateral and the medial cords form this nerve, and it has contributions from all anterior rami of C5-T1.[1][2][3][4]

The median nerve predominantly provides motor innervation to the flexor muscles of the forearm and hand as well as those muscles responsible for flexion, abduction, opposition, and extension of the thumb. The median nerve also provides sensory innervation to the dorsal aspect (nail bed) of the distal first two digits of the hand, the volar aspect of the thumb, index, middle, and half of the ring finger, the palm, as well as the medial aspect of the forearm.

At the level of the elbow, like the median nerve courses under the bicipital aponeurosis, it provides innervation to several proximal muscle bellies of the forearm, including the pronator teres, flexor carpi radialis, flexor digitorum sublimis, and palmaris longus muscles.  As the nerve emerges from the bicipital aponeurosis, it passes through the convergence point of the superficial and deep heads of the pronator teres. Compression at this point can lead to pronator syndrome, described below. The median nerve makes its final pass underneath the sublime ridge, a sheath of connective tissue formed by the convergence of the medial and lateral heads of the flexor digitorum superficialis (FDS), before emerging to give off two branches, the anterior interosseous nerve and the median nerve proper.

Approximately 5cm above the flexor retinaculum the muscle belly of the FDS ends and becomes a tendinous sheath, and the median nerve anatomically lies between this tendon and that of the flexor carpi radialis, just before diving into the carpal tunnel. At a variable point before the wrist, the median nerve gives off the palmar cutaneous branch which passes over the flexor retinaculum and strictly provides sensory innervation to the palm and the base of the thenar eminence.

At its narrowest, the carpal tunnel’s cross-sectional area is less than 2 cm^2. The median nerve passes directly beneath the flexor retinaculum sheath, alongside nine other muscular tendons. This high-traffic area is a prime spot for compression, and in fact, of all the entrapment neuropathies, carpal tunnel syndrome (described below) has been reported to be the most common.

After emerging from the carpal tunnel, the median nerve transverses below the palmar aponeurosis and immediately gives off the (recurrent) thenar motor branch which supplies the thenar muscles of the hand: flexor pollicis brevis, abductor pollicis brevis, and opponens pollicis. The last contribution of the median nerve to the thumb is from the anterior interosseous nerve, which travels outside of the carpal tunnel and supplies the flexor pollicis longus.

At the palmar aponeurosis, the median nerve splits into radial and ulnar divisions which further separate off into the common palmar digital branches. These digital branches innervate the first two lumbrical muscles and provide sensation to the palmar side of the thumb, index finger, middle finger, and the radial half of the ring finger. The median nerve also exclusively supplies sensory innervation to the dorsal surface of the index and middle fingers past the proximal interphalangeal joint (i.e., over the nailbeds).

The median nerve provides innervation to the thumb and flexor muscles of the wrist and forearm, as described above.

A Monteggia Fracture (radial head dislocation with a concurrent proximal ulna fracture) places the anterior interosseous branch of the median nerve at risk over the site of the ulna fracture as it can be stretched or compressed, resulting in traction or compression neuropathy. Posterior interosseous nerve palsy is also possible secondary to entrapment, stretching, scarring, displacement, or direct trauma. Open reduction and internal fixation of the ulna fracture will concurrently reduce the stress on the nerve and has been associated with return to baseline function of the nerve.[7][8]

Carpal tunnel syndrome is a common pathology of the median nerve as it passes beneath the narrow flexor retinaculum (transverse carpal ligament) of the wrist. Overuse of the tendons can lead to inflammation and compression of the median nerve as it passes through, causing significant pain and weakness in the affected hand. Numbness and/or pain will be present in the first three and a half digits of the affected hand, and typically this is worse at night. Weakness is usually present in the thenar eminence if severe. Lifestyle risk factors for the development of carpal tunnel syndrome include repetitive tasks (such as typing, computer work, or writing), weight gain, pregnancy, and overuse of the hands (mechanics, carpenters, cashiers). Hypothyroidism, diabetes, arthritis, or previous injury can also predispose to carpal tunnel syndrome. Conservative measures of treatment include bracing, splinting, occupational therapy, and over the counter (OTC) anti-inflammatory medications. If these fail to resolve symptoms, surgical intervention with a carpal tunnel release may be warranted.

Pronator syndrome is a median nerve compression injury similar to carpal tunnel syndrome. However, the pain is localized to the anterior proximal forearm due to compression of the nerve by the muscle bellies of the pronator teres muscle. Patients will complain of paresthesia in the distribution of the median nerve. However, there will also be numbness over the palm. The risk factors for pronator syndrome are similar to those of carpal tunnel syndrome (repetitive tasks). However, there has not been substantial literature to support surgical decompression to provide symptomatic relief. Most patients (50% to 70%) will recover with conservative therapy including rest, ice, immobilization, nonsteroidal anti-inflammatory medications, and occupational therapy.[9]

On physical exam, inspect for thenar eminence atrophy and assess light touch sensation which is a deficit in either could indicate a median nerve pathology. The anterior interosseous branch can be tested by asking the patient to make the “okay” sign with the thumb and index finger A pinch instead of the circle indicates an anterior interosseous nerve palsy. Additionally, asking the patient to flex his thumb (by laying the hand flat and asking the patient raise thumb off the bed) is a way to assess distal aspects of the nerve by assessing both opposition and flexion of the thumb.

If there is suspicion for median nerve pathology above the level of the elbow, ask the patient to make a fist. If there is a lesion at this level, then the FDP function will be affected, and flexion of the index and middle digits at the PIP joint will be impaired. This is commonly referred to as the “hand of benediction,” however in clinical practice, an anatomic variation of the ulnar nerve typically allows middle finger flexion at the PIP and therefore a “pointer finger” (pointing with the index finger) is a more appropriate description of the observed finding.

Median nerve injury at the elbow or forearm can cause a single-palmar crease appearance due to the combined inability to flex the index finger and distal phalanx of the thumb, weak flexion of the middle finger, and defective opposition of the thumb.

Injection nerve palsy is an iatrogenic condition caused when an intramuscular injection is placed in proximity to, or directly into, a nerve, thereby leading to axonal and myelin degeneration. The agent can penetrate the endoneurium, resulting in edema in the space surrounding an individual nerve fiber, ultimately leading to nerve damage and even nerve death. This will be extremely painful for the patient, and motor function will typically be more severely affected than sensory function. The most toxic agents are thought to be: penicillin, chlorpromazine, meperidine, dimenhydrinate, tetanus toxoid, procaine, and hydrocortisone.[10]

The views expressed in this article are those of the author(s) and do not necessarily reflect the official policy or position of the Department of the Navy, Department of Defense, or the United States Government. 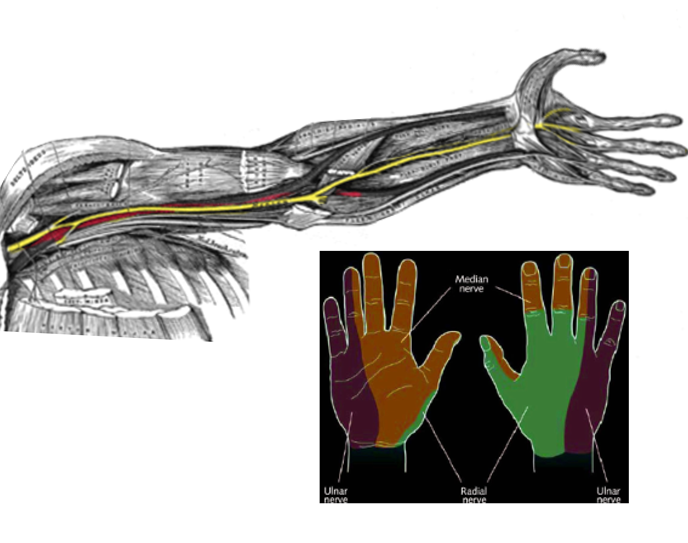 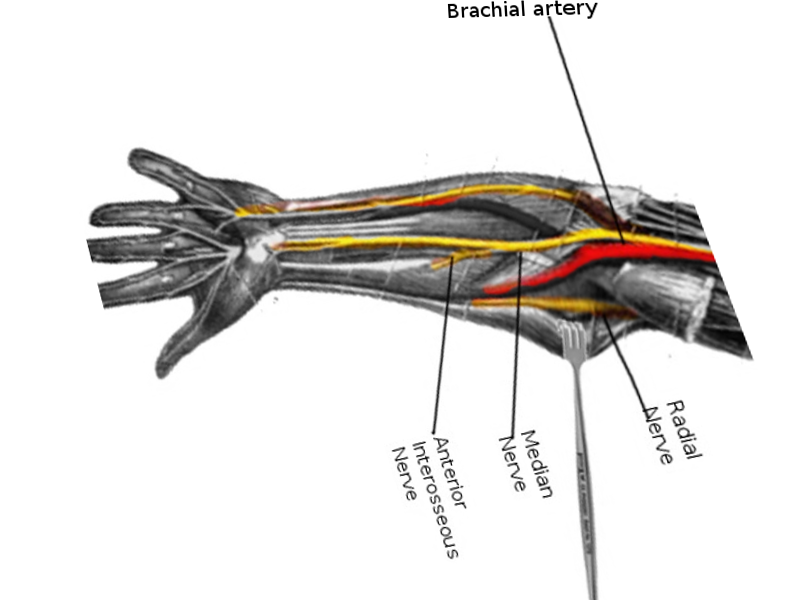