The brachial plexus, and therefore the medial brachial cutaneous nerve, have an ectodermal origin, with the bones, blood vessels, and muscles of the limbs arising from mesoderm. The limb buds are paddle-shaped structures that grow outwards gradually, starting in the fifth week of development.[6] The brachial plexus forms as spinal cord segmental nerves invade the limb bud mesenchyme. It arises from cervical segments 5 through 8 and the first thoracic segment. Early in development, a dorsal branch forms to supply the extensor muscles, and a ventral branch supplies the flexor muscles, and the pattern is conserved as the plexus becomes more complex. The limbs are positioned at birth through growth factors, including fibroblast growth factor (FGF), sonic hedgehog (SHH), and homeobox (Hox) genes.[7] FGF signaling molecules are important for anterior-posterior patterning of limb development and induce the formation of the apical ectodermal ridge at the limb bud, which controls cell death. The loss of this gene leads to the webbing between digits. The SHH signaling molecule regulates the growth of limbs and is secreted at the zone of polarizing activity on the posterior side of the limb buds. The Hox genes contribute to proximodistal limb patterning, and mutations lead to limb formation in abnormal locations.

Vasa nervorum are thin, tortuous arteries that provide blood supply to peripheral nerves, especially to the inner parts of nerves and their coverings. They are an irregular source of nutrients that supplies each peripheral nerve from the neighboring blood vessels. The medial brachial cutaneous nerve gets its blood supply from the vasa nervorum arising from the axillary vein and basilic veins, respectively, along its path.

Additionally, research has found some variants in the brachial plexus where there is an absence of the posterior cord, causing the lateral and medial cords connecting with the communicating branches and that course in front of the axillary artery.[8] As the medial brachial cutaneous nerve originates from the medial cord, this would change its course in these individuals. Therefore, caution should always be used in surgery when dissecting the medial aspects of the arm, making a note of individual variations. In some patients, the nerve may be absent.

The medial brachial cutaneous nerve plays a role in upper extremity nerve entrapment syndromes, especially following axillary lymph node dissections and breast augmentation. Entrapment of this nerve should be a consideration with complaints of paresthesia over the upper arm.[5] This condition is diagnosable via ultrasound with the transducer places on top of the teres major and latissimus dorsi muscles. It can be found on the distal arm running parallel to the ulnar nerve. Possible entrapment of the nerve is identifiable by changes in nerve size and echogenicity, as well as hypertrophic scars on adjacent structures causing possible compression.[5] 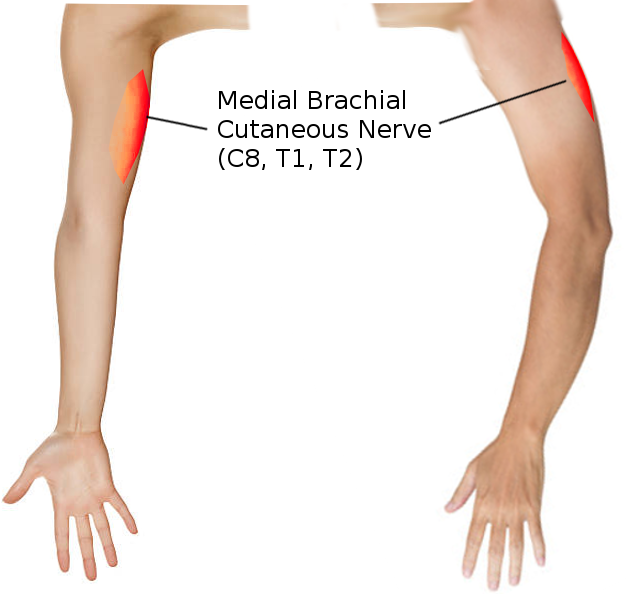