The sympathetic chain is a ganglionated chain present bilaterally extending from the base of the skull to the coccyx. It divides into cervical, thoracic, lumbar and sacral segments. The two side chains fuse at the ganglion in front of the sacrococcygeal junction. In this article, the lumbar sympathetic chain is discussed in detail below.

Location and relations: It presents four interconnected ganglia, on either side. Lumbar sympathetic chain lies anterolateral to the bodies of lumbar vertebrae, deep to the medial aspect of the psoas major muscle.

The lumbar sympathetic chain receives input from the first, second and the third lumbar sometimes are connected by the white rami communicantes,  which contain the preganglionic neurons from the lateral horn of the spinal cord.

All lumbar spinal nerves close to the beginning of their ventral rami join by grey rami communicantes from the ganglia that contain postganglionic neurons. They supply the skin and vessels in the respective territory. Grey rami may leave the sympathetic trunk between the ganglia to form plexuses around the neighboring arteries to reach the target organs. Sympathetic trunk branches accompany lumbar, aorta, common, internal and external iliac arteries. The adrenal medulla is a unique structure in the body that it receives supply from the preganglionic neurons from T10 to L1 spinal segments.

Preganglionic sympathetic neurons release acetylcholine as the neurotransmitter, whereas noradrenaline is the neurotransmitter in postganglionic neurons. The postganglionic neurons are non-myelinated; they reach the target organs in several ways. They will return to the spinal nerves through grey rami communicantes, then distribute through ventral and dorsal rami to blood vessels, sweat glands, and hairs in their territory. In addition, they also travel via a medial branch to the viscera or innervate blood vessels or form plexuses on them to reach their periphery. The majority of the fibers accompany arteries and ducts to reach the distant effectors.

The postganglionic sympathetic fibers are vasoconstricting to blood vessels, secretomotor to sweat glands, and motor to arrector pili muscle. The fibers which follow the motor nerves to skeletal muscle are a vasodilator. The fibers which reach the viscera are responsible for general vasoconstriction, regulation of glandular secretion, and inhibition of smooth muscle contraction in the gastrointestinal system.

General visceral afferent fibers from the viscera and blood vessels follow their efferent fibers. They are the peripheral processes of pseudo-unipolar neurons situated in the dorsal root ganglion of thoracic and upper two lumbar spinal nerves. Visceral afferent fibers which enter the spinal cord through spinal nerve roots terminate in the gray matter. They form connections with CNS that controls autonomic reflex functions. Visceral pain is felt near the viscera or in a cutaneous area or other tissue whose somatic afferents enter the spinal segments that receiving visceral afferents from viscera, the explanation underlying the referred pain.

Medial branches of the lumbar arteries will give ganglionic branches that supply the sympathetic ganglia and trunk. Veins drain into the corresponding lumbar veins. Lymphatics drain into lateral aortic lymph nodes.

A sympathetic block is performed to treat several vascular disorders,[8] lumbar sympathectomy is indicated to improve blood circulation in vasospastic disorders like Raynaud disease.[9] It is advised to improve distal circulation to the extent that amputation can be avoided and in cases where vascular reconstruction is not available, such as Buerger disease.[10] It is the choice of treatment in idiopathic plantar hyperhidrosis,[11] frostbite,[12] reflex sympathetic dystrophy and complex regional pain syndrome.[13][8] The lumbar sympathectomy destroys sensory and vasomotor fibers as evidenced by relief of rest pain and increased blood flow.[14]  For the sympathetic block, the medial border of the psoas major acts as a guide for needle placement at the level of L3 where there is consistency in its relation in people with spondylophytes. Complications of the procedure are significantly reduced with radiography guided needle insertion.[15] 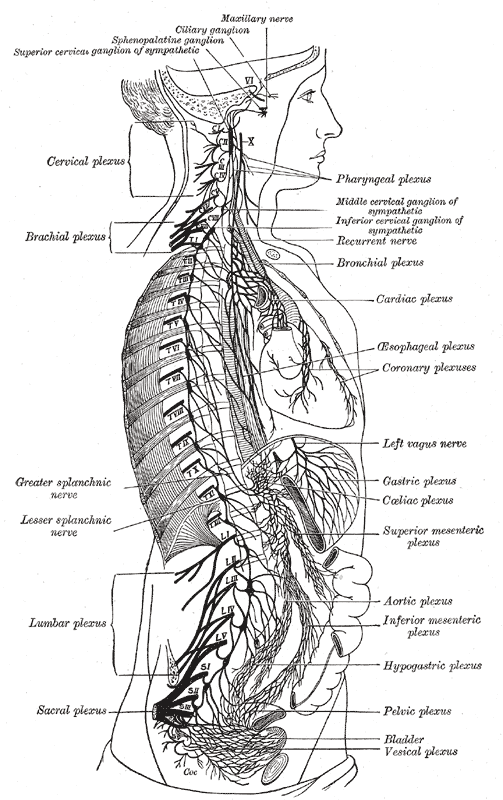 The Sympathetic Nerves, The right sympathetic chain and its connections with the thoracic, abdominal, and pelvic plexuses
Contributed by Gray's Anatomy Plates 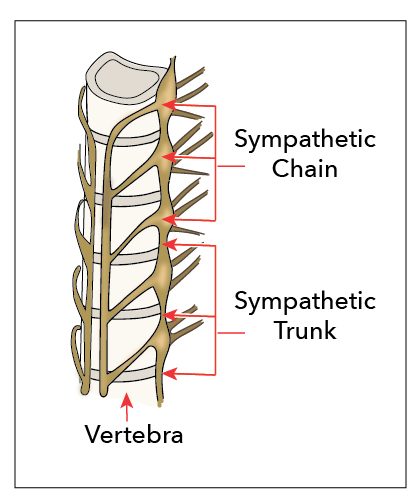 Coventry BJ,Walsh JA, Cutaneous innervation in man before and after lumbar sympathectomy: evidence for interruption of both sensory and vasomotor nerve fibres. ANZ journal of surgery. 2003 Jan-Feb;     [PubMed PMID: 12534731]