More than 50 percent of all venomous vertebrates are fish, and which pose a threat to divers around the world. The family Scorpaenidae includes the most venomous fish. Lionfish, scorpionfish, and stonefish are members of this family. All of these fish possess spines on their dorsal, pelvic, and anal fins. These spines are encapsulated by glandular venom-producing integumentary sheaths that release venom when mechanically disrupted through contact with a victim. Lionfish are common residents of aquariums and commonly injure the fingers and hands of those who handle them. Scorpionfish are commonly encountered by divers or fishermen and likewise, often injure the hands of those who touch them. Stonefish are bottom-feeders commonly found in the coastal waters of Australia, Indonesia, and India that cause injury when they are stepped on. This activity reviews the evaluation and management of lionfish, scorpionfish, and stonefish envenomation and highlights the role of interprofessional team members in collaborating to provide well-coordinated care and enhance outcomes for affected patients.

Venomous fish are a threat to divers across the world. In fact, more than 50% of venomous vertebrates are fish. The family Scorpaenidae includes the most venomous fish in the ocean and, next to the stingray, are responsible for the most marine envenomations annually. [1][2][3]The family is subclassified by the morphology of the venomous spines of the fish into 3 major subfamilies, the lionfish, scorpionfish, and stonefish. All of these fish possess spines on their dorsal, pelvic, and anal fins. These spines are encapsulated by glandular venom-producing integumentary sheaths that release venom when mechanically disrupted through contact with a victim. Lionfish are common residents of aquariums and typically injure the fingers and hands of those who handle the fish. Scorpionfish are commonly encountered by divers or fishermen and often injure the hands of those who touch them. Stonefish are bottom-feeders that cause injury when they are stepped on, commonly in the coastal waters of Australia, Indonesia, and India. Understanding the distribution of these fish, their appearance, the injuries they cause, and management is important for physicians and patients at risk.

The lionfish belongs to the subfamily Pteroinae and is native to the Indo-pacific coastal waters. However, it is more commonly encountered by aquatic fish tank handlers across the United States who try to hand-feed, transfer, or catch the fish. They are prized aquarium fish because of their beautiful, yet foreboding, coloration and whimsical fins and rays, which contain the spines. [4][5]The lionfish is considered one of the most threatening, invasive species in the Atlantic Ocean. The first, red lionfish (Pterois volitans) was likely introduced off the coast of Florida around 25 years ago. As a result, 2 of 15 species of Pteroinae, including the common lionfish (Pterois miles), are well-established across the east coast of the United States posing a monumental threat to coral reef life in the Caribbean. It is important for divers in these areas to recognize and avoid skin contact with lionfish due to the consequences of their envenomation. Many divers hunt lionfish as a service to the health of the reef, but this should be done very carefully wearing gloves and other protective gear to avoid getting pierced by the spines.

The scorpionfish belongs to the subfamily Scorpaeninae which, like the lionfish, is native to the Indo-pacific coastal waters but can be found westward off the coast of California down to South America and eastward off the coast of North Carolina through the Caribbean down to Brazil. Scorpionfish are less aggressive than the lionfish but are much more camouflaged (see figure 1). Although they often pose a threat as aquarium occupants, they typically cause injuries when caught by fishermen or encountered by divers.

The stonefish, a member of the subfamily Synanceinae, is most commonly encountered in the Indo-pacific region, although a few species are reported in the Caribbean Sea and waters of the Florida Keys. The stonefish, like the scorpionfish, is well-camouflaged with an uglier appearance. As opposed to the scorpionfish and lionfish, the stonefish is rarely spotted before causing harm. It lies flat on the ocean floor and most often causes injury when its rigid dorsal spines are kicked or stepped on. The stonefish is widely known as the world’s most venomous fish.

In a 2015 retrospective epidemiological investigation of several Scorpaenidae envenomation case series, Diaz determined that individuals most commonly injured are young adult males who vacation to endemic regions native to the fish. These individuals were typically engaging in activities that put them at increased risk such as wading in the surf, wade-fishing, beachcombing, or exploring tide pools.[6][7]

Lionfish present an additional epidemiological threat as prized aquarium fish. Of the 45 lionfish (P. volitans) injuries reported to the San Francisco Bay Area Regional Poison Control Center from 1979 through 1983, 82% occurred in homes with saltwater aquariums and 18% occurred in tropical fish stores. Injuries occurred during transferring, catching, or hand-feeding the fish.

The family Scorpaenidae produce heat-labile, nondialyzable venoms that differ in potency but are very similar in composition. The toxins are composed of the following high molecular weight (50 to 800 kDa) proteins: hyaluronidase, pain-producing factor, capillary permeability factor, and species-specific toxic factors. The stonefish possesses the most potent venom, while the lionfish venom is the least potent. The venom of the fish remains potent for up to 48 hours after the death of the fish.

A thorough history including the details of the injury should be elicited from patients to help identify the cause. Victims of envenomation typically seek medical help within 2 hours because of the systemic symptoms stated above, a puncture wound, intense pain (often with proximal radiation), or lymphedema associated with the injury. Erythema, pallor, or ecchymoses may be associated with the wound. Patients may report anesthesias or paresthesias in addition to the intense pain. The lymphedema associated with the injury is usually most severe in lower leg injuries caused by stonefish, and lymphadenitis is also possible in such cases. Systemic symptoms noted on physical exam may include hypotension, diaphoresis, respiratory distress, abdominal tenderness, and decreased strength.

Infected puncture wounds should be cultured, utilizing selective media like sodium-enriched media for Vibrio species, and stained for acid-fast aquatic mycobacteria. Further, wounds should be cleaned with warm, sterile saline and diligently searched under local anesthesia for foreign bodies, specifically spines. [9][10][11]Supplemental radiographs and ultrasound may be helpful for retained radiolucent and radiopaque foreign bodies, respectively. Blisters often contain active venom, resulting in dermal necrosis if not treated with excision.

Many cases are treated appropriately with hot water immersion. Hot water immersion therapy is considered the gold standard for treatment of marine envenomations due to the heat labile venoms (fish, starfish, and sea urchin). Patients should soak the affected limb in hot water (42 to 45 C or as close to 42 C as tolerated) for 30 to 90 minutes, or until removal from hot water no longer results in recurrence of pain. If hot water immersion is insufficient for pain control, nonsteroidal anti-inflammatory drugs may be used for mild pain with opioids reserved for ongoing moderate to severe pain. [12]Extremities that develop painful lymphedema can be treated with compressive dressings. In severe cases of scorpionfish and stonefish envenomation, equine Fab stonefish antivenom (acquired by contacting CSL Corporate Offices) administered intramuscularly or intravenously is capable of neutralizing Indo-Pacific and Atlantic Scorpaenidae species. Physicians must be proactive in identifying severe envenomations, characterized by systemic symptoms because multiple fatal cases have been reported; although, anaphylaxis rather than venom toxicity may have been the mechanism of death.

Patients should receive tetanus prophylaxis as indicated and antibiotic prophylaxis for most wounds other than those considered minor. Antibiotic prophylaxis is not standardized although general guidelines recommend broad-spectrum antibiotic prophylaxis (i.e., oral doxycycline with intravenous [IV] ceftazidime) for all puncture wounds with coverage for the following bacteria: Vibrio, Aeromonas, Mycobacterium marinum, and Erysipelothrix rhusiopathiae. Monotherapy may be used in immunocompetent patients with minor puncture wounds (i.e., ciprofloxacin 500 mg orally twice daily for 5 to 7 days). Physicians should guide ongoing antibiotic therapy for acutely infected wounds with cultures and sensitivities.

The differential diagnosis for marine envenomation is lengthy. Marine injuries may be mistaken for each other making it difficult to determine the source of the injury. The mechanism of the injury may reveal the organism responsible. The stingray causes the most marine injuries in the United States annually and should be on the differential if patients were injured after stepping on a flat diamond-shaped fish buried in the sand. Injury from stepping on sharp debris such as coral is also very common which may result in acute contact dermatitis at the site of injury. Sea urchins also cause injury when stepped on and are distinguished by many small puncture wounds that often contain dark, brittle spines. Jellyfish envenomation is typically characterized by dermatitis in a flagellation, or whip-like, pattern. Other organisms to consider are the cone snail, sea anemone, starfish, catfish, blue-ringed octopus, and weeverfish.

Ultimately, the greatest tactic regarding scorpionfish, lionfish, and stonefish injury is avoidance. Divers across the globe should be aware of the distribution of these fish and their appearance. Aquarium handlers or fishers should avoid handling the fish with their hands or use puncture-proof gloves and be wary that Scorpaenidae fish are still venomous up to 48 hours after death. Individuals who wade in coastal waters may shuffle their feet or clear their path with a walking stick to ward off rather than unsuspectedly confront the toxic fish. Protective footwear and leg guards may also help prevent injury although stonefish spines can penetrate the standard tennis shoe.

As more people participate in water related activities, the incidence of injuries by marine animals have also started to rise. The majority of people injured by marine creatures initially present to the emergency department. However, care of these patients is best done with an interprofessional team that includes an emergency department physician, toxicologist, infectious disease expert and an internist.

The primary care provider and nurse practitioner play a vital role in educating the public on how to prevent such injuries. Divers across the globe should be aware of the distribution of these fish and their appearance. Aquarium handlers or fishers should avoid handling the fish with their hands or use puncture-proof gloves and be wary that Scorpaenidae fish are still venomous up to 48 hours after death. Individuals who wade in coastal waters may shuffle their feet or clear their path with a walking stick to ward off rather than unsuspectedly confront the toxic fish. Protective footwear and leg guards may also help prevent injury although stonefish spines can penetrate the standard tennis shoe.

For most patients, the outcomes are good if treatment is undertaken promptly.[13] 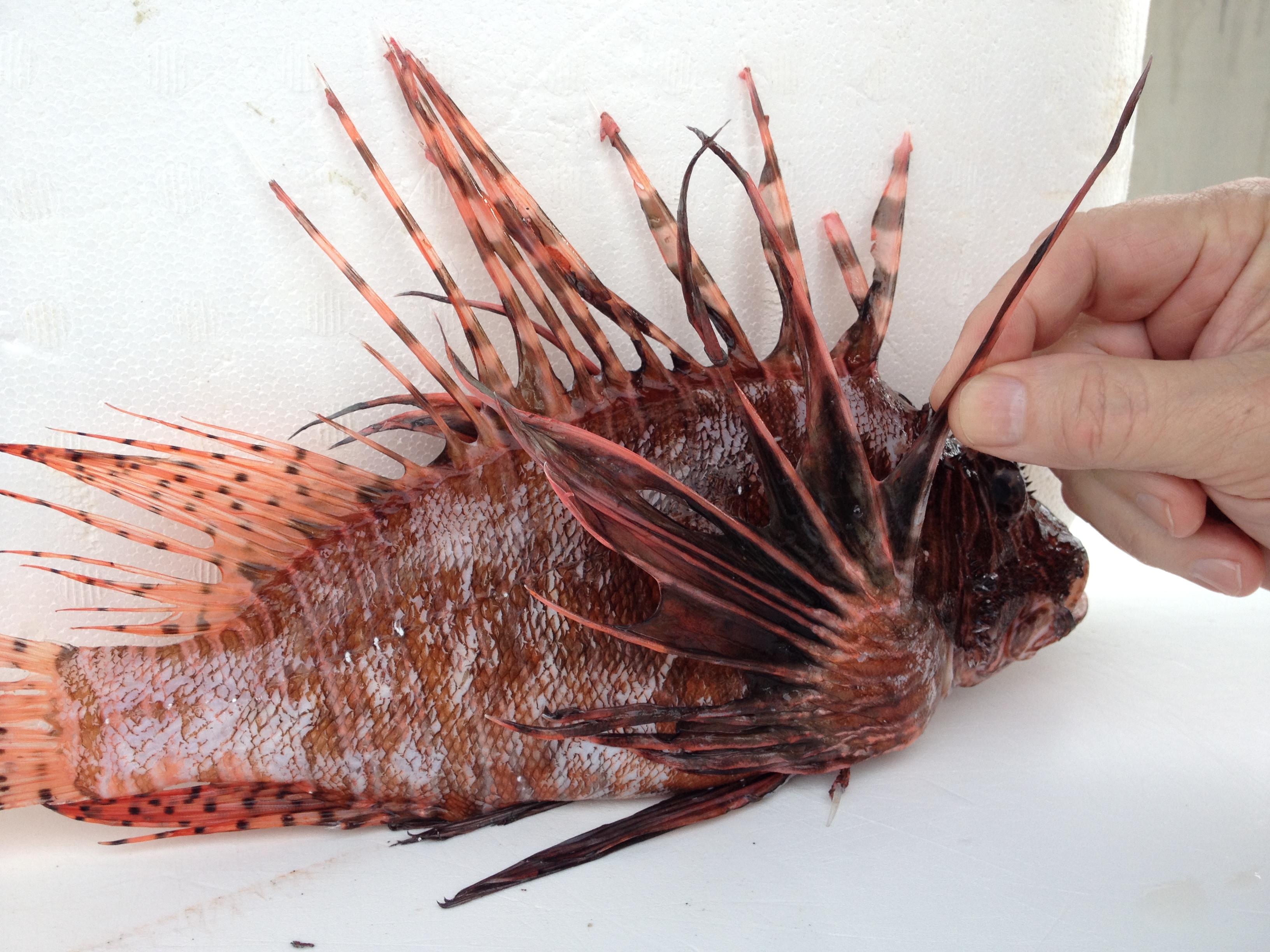 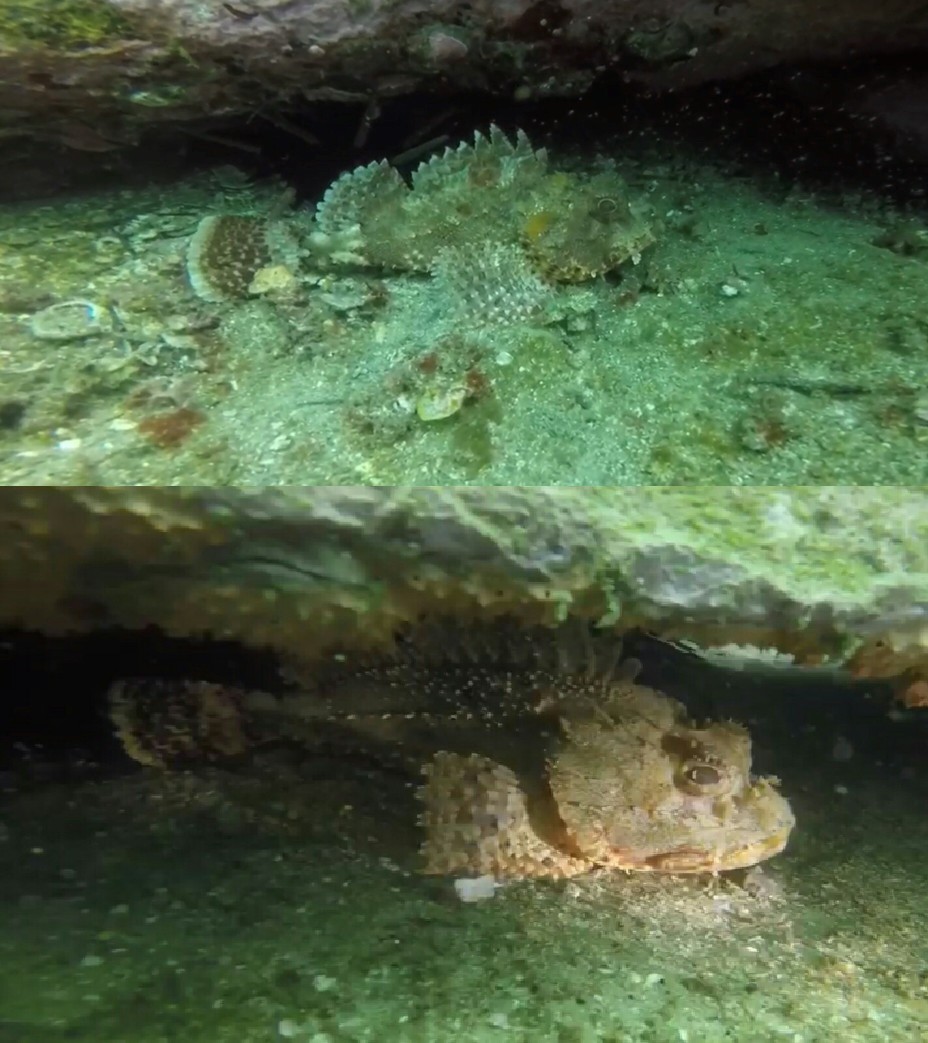