Lichen striatus is an uncommon condition typically seen in children that presents as elevated pink papules that coalesce to form one or more linear, potentially scaly bands along the Blaschko lines. Lichen striatus is benign and self-resolving and does not require extensive investigations or treatment. This activity describes the pathophysiology, evaluation, and management recommendations for lichen striatus and stresses the role of the interprofessional team in the management of patients affected by these skin lesions.

Lichen striatus (LS) is uncommon and occurs most frequently in children. It presents as a pink rash with raised spotting that comes together to form singular or multiple, dull-red, potentially-scaly linear bands that affect the Blaschko lines. While these lines are typically invisible, disorders like lichen striatus may bring these to light.[1][2][3]

The exact cause of this condition is unknown, although it has been theorized that genetic factors and/or environmental triggers may play a role. One theory is atopy, a condition in which patients have a genetic predisposition to allergic responses. In one study researchers observed that 85% of patients suffering from lichen striatus have a family history of an allergy-based condition, for example, atopic dermatitis, asthma, or allergic rhinitis/ However, this study is contradictory to another study that offered no such statistically significant conclusion. Another study suggests an autoimmune response to pregnancy, whereby the pregnancy itself triggers an auto-immune response. Another possible connection may be to vitiligo, a condition in which certain areas of the skin lack pigment. It has also been suggested that the condition results following treatment with and as a consequence of the drugs adalimumab and etanercept. Others reports cite lichen striatus as a T-cell-mediated inflammatory disorder.[4][5][6]

The other theory of etiology of lichen striatus is that it is due to environmental triggers. For example, there have been outbreaks among unrelated children living in a shared living environment. A link to it being a viral consequence has also been suggested due to elevations of interleukin 1-beta in biopsy samples of such lichen striatus patients, although no conclusive evidence has been observed to support this finding wholly.

Outbreaks have also occurred following Bacille Calmette Guerin (BCG) and hepatitis B vaccinations, in patients who were exposed to ultraviolet (UV) rays via a tanning bed, after a patient picked a pineapple leaf, after a bumblebee bite, and following varicella and influenza infection.

Another study provided evidence to support that lichen striatus was the result of epigenetic mosaicism, where the individual exhibits populations of cells with different genotypes. In this study, it is theorized that a patient with lichen striatus is predisposed genetically.  The condition is triggered by an “immunologic reaction to an infection,” and that this results in a cascade of events including the methylation or demethylation of a portion of a “partially silenced genomic element.”  Also, it has been reported that lichen striatus is triggered as a result of a viral infection of herpesvirus 6 and 7.

More than 50% of the diagnosed cases are in children between the ages of 5 and 15 years of age. It is rarely seen in adults. It is referred to as acquired blaschkoid dermatitis.There are no racial predilection for lichen striatus and man. Some studies have shown that it is 2-3 times more common in girls compared with boys while many others showed an equal sex distribution. There are no consensus on sex predilection for the condition.

The lesions of lichen striatus begin as small pink, flesh-colored, or red spots, which may be raised. Over the course of approximately 1 to 2 weeks, these spots begin to join to form a dull, red, linear band. These lines can be lightly scaly. The band itself is often about 2 mm to 2 cm in width and a few centimeters in length, or as long as the limb it affects. At times, 2 parallel bands can be seen side by side. Typically, these are observed on 1 of the major extremities, such as an arm or a leg, but may also be seen on the neck, buttock, or trunk region of the body. Slight or intense itching is frequently the only accompanying symptom. Though less common, nails can also be affected with or without the presence of skin lesions and may become thick, ridged, split, or possibly fall off.

Lichen striatus exhibits a histological pattern of inflammation known as lichenoid infiltrate of the epidermis, specifically, showing diffuse epidermal hyperplasia (acanthosis). There may also be several melanophages present in the uppermost layer of the dermis, and apoptotic keratinocytes are also typically observed throughout the epidermis. The infiltrate typically extends to involve eccrine structures.

Lichen striatus initially presents as a spontaneous eruption of a pink rash with raised spotting (papules) that come together to form a singular or multiple, dull-red, potentially-scaly, linear band that affects the Blaschko lines. It is a distinct cutaneous surface pattern of lines on the skin that do not originate from the nervous or circulatory systems.  These often occur on the extremities, but, can also be observed on the buttock, neck, and trunk region. The condition is often asymptomatic but in some cases, patients present with pruritus. The lesions often resolve on their own; although, in some circumstances, post-inflammatory hyperpigmentation or hypopigmentation can occur.[7][8][9][10]

Lichen striatus can be diagnosed by its specific clinical appearance and via its histopathological patterns through the use of skin biopsies.

No treatment is needed due to the self-limiting nature of the condition. If, however, a patient seeks treatment, emollients can be used, low-dose systemic corticosteroids, a short course of acitretin, as well as, topical steroids to treat the dryness or pruritus. Other therapies include photodynamic treatment using aminolevulinic methyl acid. Tacrolimus and pimecrolimus can also be used to treat persistent and pruritic lesions on the face and arms and legs. Nail abnormalities can be treated with tacrolimus.

The clinical presentation is helpful. Lichen striatus should be differentially diagnosed from lichen planus or lichen planus-like keratosis in which the apoptotic keratinocytes are limited to the basal epidermis rather than extending throughout all levels of the epidermis. The infiltrate does not usually involve eccrine glands.

The following should be properly ruled out:

Due to its self-limiting nature, the prognosis of LS is excellent with a complete recovery expected. It typically completely resolves spontaneously within a year, though it can do so within 4 weeks to 3 years. Relapses are uncommon. The nail component of this condition usually resolves itself and can last from 6 months to 5 years. When it resolves, it does so without any remaining deformity.

The complications are few and rare. Postinflammatory hyperpigmentation and hypopigmentation can persist for several months to years after the condition has resolved.

Lichen striatus is a rare skin lesion seen in children. The diagnosis is clinical and the rash is benign. Healthcare workers including pharmacists and nurses who see these patients should not resort to unnecessary treatments because the condition resolves on its own. The few patients with pruritus may benefit from topic steroids.

The outcomes are excellent. 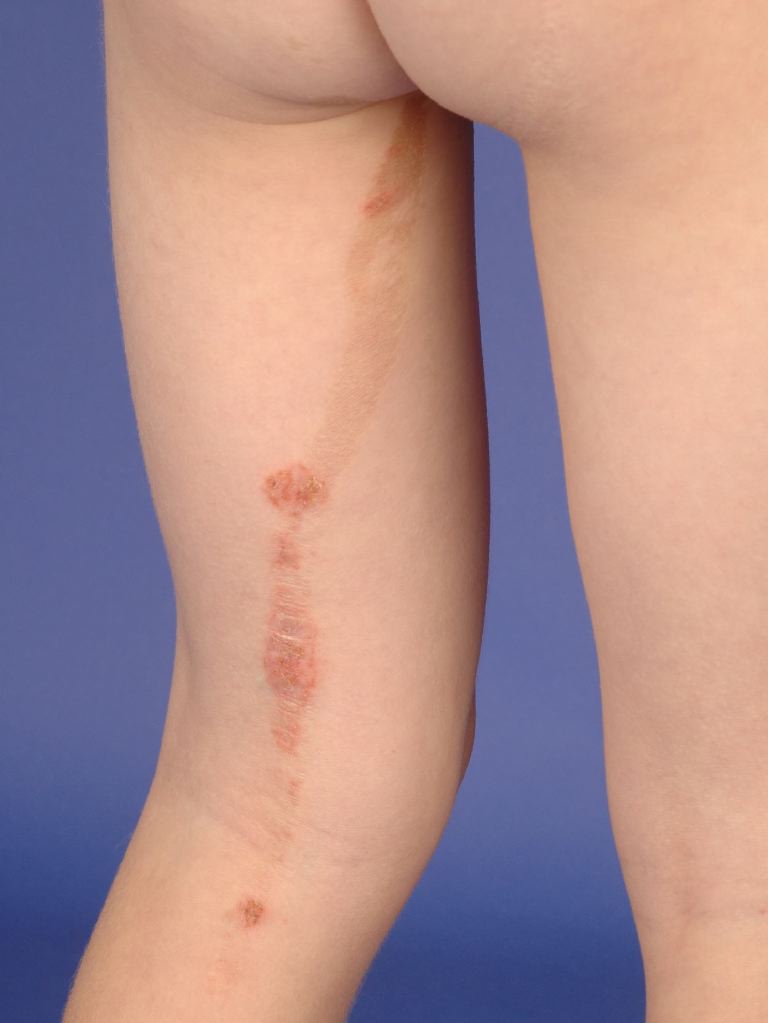