The levator ani is a complex funnel-shaped structure mainly composed of striated muscle, with some smooth muscle component.[1] Located on either side of the lower pelvis, it takes part in supporting and raising the pelvic floor and allows various pelvic structures to pass through it. Levator ani muscle is part of the pelvic floor along with coccygeus muscle. It forms from the confluence of three muscles, puborectalis, pubococcygeus and iliococcygeus muscles. These mostly receive innervation by the somatic nerves from the sacral plexus, namely the pudendal nerve and nerve of levator ani muscle and autonomic nerves from the inferior hypogastric plexus.[2]

The major function of the levator ani muscle is supporting and raising the pelvic visceral structures. It also helps in proper sexual functioning, defecation, urination, and allowing various structures to pass through it. It is composed of three parts puborectalis, pubococcygeus ad the iliococcygeus muscle.

Arcus tendinous fascia pelvis covers the medical aspect of obturator internus muscle, the posterior part of this thickened fibrous fascia forms the arcus tendineus levator ani, which is the origin for the iliococcygeus part of the levator ani muscle. The muscle passes backward, and downwards the midline, the posterior fibers insert into the coccyx and the anterior fibers into the anococcygeal raphe or body.[3]

Puborectalis originates from the inferior part of the pubic symphysis and the superior fascial layer if the urogenital diaphragm. It the courses backward and forms a sling around the rectum and meets the fibers from the opposite muscle at the midline.

Pubococcygeus originates from the posterior aspect of the inferior rami of the pubis and anterior part of the obturator fascia. It passes back towards the midline and inset into the anococcygeal raphe. It has variation depending on the gender, where it inserts to either the vagina as pubovaginalis muscle in females or the prostate as puboprostaticus muscle in males.

Pubococcygeus muscle controls the flow of urine also helps reduce urinary incontinence, where a weaker pubococcygeus muscle is seen in a higher number of urinary incontinence patients, especially in gravid and post-gravid women. The pubovaginalis muscle in females and its male counterpart levator prostatae (also called puboprostaticus), form the medial part of the pubococcygeus and function to support the vagina in females and prostate in males, respectively. It aids in ejaculation in males and assists childbirth in proper positioning of the fetus head and provide core stability.[4]

Iliococcygeus forms the midline raphe after it meets the fibers from the opposite side, which is continuous with anococcygeal ligament, provides a secure anchoring point for the pelvic floor.

The levator ani muscle helps to manage mechanical pressures during movement; it is important for the distribution of loads during walking and the movements of the trunk and limbs.

During breathing, the muscle is under the control of the upper breathing centers; during inhalation, it releases while during exhalation it contracts.

A 2012 study showed that the levator ani muscle is in direct connection with the gluteus maximus muscle, via a connective tissue bridge at the level of the ischioanal fossa.

The levator ani muscle represents the evolutionary byproduct remnants of tailed mammalians. The muscle development is apparent as early as the ninth week of fetal life, where the rudimentary forms begin to form and can already be separated into the three parts by loose mesenchyme. It derived from the pubocaudal group of muscles. In the fourteenth week of fetal life, the distinctive funnel shape is visible. By the second trimester, the differences in the male and female forms of the levator ani muscles become more evident. Pubococcygeus and the iliococcygeus get differentiated with the help of the tendinous arch.

The embryological sheet from which this muscle complex derives is the mesoderm.

The blood supply to the levator ani muscle comes from different branches of the inferior gluteal artery, inferior vesical artery, and pudendal artery. Venous drainage and lymphatic drainage are along the corresponding veins accompanying the arteries.

The primary nerve supply is from the nerves originating from the S3 and S4, with come fibers from the S2 and coccygeus plexus. Nerve to levator ani is a part of the pudendal plexus, originating from the fourth sacral spinal nerve. These muscles also receive fibers from the inferior rectal nerve, which is a branch of the pudendal nerve, and from a few fibers of the coccygeus plexus. There are no bilateral innervations of the muscles.[6][7]

The Levator Ani Muscle consists of the following parts [8]:

We must remember, however, that the current anatomical literature does not agree in describing the complexity of the levator ani and the muscles of the pelvic floor. There is the pelvic diaphragm, the urogenital diaphragm, the endopelvic fascia, the visceral and somatic ligaments, the ischiococcygeus muscle. Furthermore, the vectors of the muscle fibers, according to tractography studies, demonstrate how a highly chaotic orientation exists; this arrangement allows an optimal ability to adapt to different functional requests.

There exists some variation in the nerve supply from, ranging from the direct supply by the fourth sacral spinal nerve to supply from coccygeal plexus.[6]

There are different reasons for a surgical approach to the levator ani (tumors, repairs, trauma, prolapses, and more), as well as various surgical techniques (these depend on the site of the intervention, the choice of the surgeon, the subjective need and more). In general, the decision of surgical intervention is the impossibility of following non-invasive management.

It results from the spasmodic contraction of the levator ani muscle. It is characterized by recurrent and chronic burning pain, pressure, tenesmus, or discomfort without any obvious detectable organic pathology. It is felt in the rectal, sacral, and coccygeal regions, sometimes radiating to the thigh or the gluteal region. The diagnosis is mostly clinical, where the pain exaggerates on sitting and relived on lying down or standing up. It is a diagnosis of exclusion and is diagnosable by the Rome III criteria for Diagnosis of Levator Ani Syndrome:

Points 1 to 4 mentioned above are the diagnostic criteria for chronic proctalgia, whereas tenderness of the puborectalis muscle (point no. 5) is the differentiating factor. The Rome IV update on Colorectal Disorders hasn't changed the above mentioned diagnostic criteria.[9]

There is no specific single treatment successful for all patients. Reassurance regarding the benign nature of the disease should come first. Then, the range of treatment would include digital massage, muscle relaxants, sitz bath, biofeedback, and electro-galvanic stimulation.[10]

It is decent of one or more of pelvic organs out of the pelvis; it can either be the anterior vaginal wall with the bladder as its contents, posterior vaginal wall with the rectum, the uterus, or the vaginal vault. Prolapse can cause dysfunction in activities of daily living, exercising, and sexual functioning. Its cause is multifactorial, but the most common factor would be pregnancy. Other risk factors include prior obstetric procedures or pelvic surgeries, chronic cough or straining, repeated heavy lifting, genetic, and ethnicity. The weakening of the levator ani muscle is the most common pathophysiology, where the funnel shape is altered and is more vertically oriented, causing the widening of the opening for the vagina.[11]

As most cases of pelvic organ prolapse are asymptomatic, observation can be the treatment of choice with lifestyle modification regarding smoking cessation, avoiding heavy lifting, and correcting constipation being helpful. Pelvic floor muscle training, also known as Kegel exercises which are performed by repeatedly contracting and relaxing the muscles of the pelvic floor made up of the levator ani and coccygeus muscle. It is done several times a day, lasting for a few minutes each time, for between two and three months, to strengthen the pelvic floor muscles.

Invasive methods like pessaries and surgical correction can be options for the treatment of a severe form of prolapse.

Physiotherapy at the levator ani muscle is the recommendation for problems related to childbirth or the presence of muscle weakness that could lead to visceral prolapse, or in cases of incontinence.[12] [13][14] 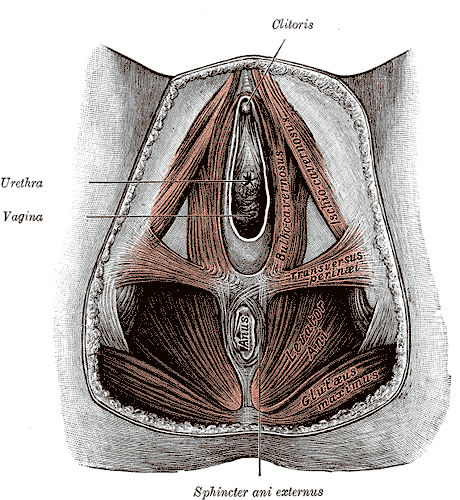