A muscle of facial expression, the levator anguli oris, serves to elevate the corners of the mouth. Along with the zygomaticus major and minor, the levator labii superioris, and the levator labii superioris alaeque nasi, it is responsible for providing upper dental show, primarily during smiling, and for maintaining the resting tone and position of the upper lip. While it is not the most critical of the smile muscles, unilateral dysfunction of the levator anguli oris can lead to noticeable asymmetry of the smile, which can have a noticeable impact on a person's quality of life.[1]

Other contributors to the elevation of the upper lip are the levator labii superioris (also known as the quadratus labii) and the levator labii superioris alaeque nasi muscles, which move the lip directly upwards, and the zygomaticus minor muscle, which inserts on the orbicularis oris muscle more medially than the zygomaticus major muscle, but still has an oblique vector of pull.[3] The levator anguli oris, located along with the buccinator and mentalis in the deepest layer of the mimetic muscles, originates roughly 1 cm inferior to the infraorbital foramen within the canine fossa of the maxilla. Its fibers travel in an anteroinferior direction to insert into the modiolus of the oral commissure, a fibrous nexus of muscle interdigitation at the lateral aspect of the orbicularis oris situated at the corner of the mouth. Contributing to the modiolus are the zygomaticus major, risorius, buccinator, depressor anguli oris, orbicularis oris, and levator anguli oris; each of these muscles exerts a force on the oral commissure in a different vector, permitting the myriad variations and nuances of human facial expression.

The levator anguli oris muscles develop alongside the other mimetic muscles of the face, beginning in the third to fourth week of development.[4] The muscles of facial expression arise from the second branchial arch, which also produces the facial nerve, the stapedial artery (which subsequently involutes in most people), and Reichert's cartilage, which in turn becomes the stylohyoid ligament, the lesser cornu of the hyoid bone, and the styloid process of the temporal bone.[5]

Branches of the external carotid artery deliver blood supply to the majority of the face, while the internal carotid artery contributes a smaller amount of blood flow, predominantly in the periocular region.[6] The facial artery, a large branch of the external carotid artery, originates in the carotid triangle of the neck before traversing the mandible on its way anterosuperiorly toward the lower face. Various small branches of the facial, internal maxillary, and superficial temporal arteries, all of which arise from the external carotid, supply blood to the levator anguli oris.[2] The facial artery provides the lateral nasal artery, which crosses and then runs medially to the levator anguli oris; the internal maxillary artery gives off the infraorbital artery, which runs with the infraorbital nerve (V2) and then emerges from the maxilla through the infraorbital foramen, just superior to the levator anguli oris. The transverse facial branch of the superficial temporal artery also supplies the midface musculature, and some of its terminal branches may feed the levator anguli oris.[6]

Following the facial vein, lymphatic fluid from the midface drains into the preauricular, infra-auricular, parotid, nasolabial, buccinator, submandibular, submental, internal jugular, and anterior jugular basins, and from there ultimately into the cervical lymph nodes.[16]

The facial nerve, composed of approximately 10,000 axons, provides motor control of the muscles of facial expression, in addition to the posterior belly of the digastric, the stylohyoid, and the stapedius muscles. Upon emerging from the temporal bone, the facial nerve travels through the parotid gland, separating the deep and superficial lobes, and then continues distally beneath the superficial musculoaponeurotic system (SMAS) of the face. Because the mimetic muscles are contiguous with the SMAS layer, the majority of the muscles of facial expression are innervated from their deep surfaces; the exceptions are the buccinator, the mentalis, and the levator anguli oris muscles, which lie deeper within the face and are therefore innervated from their superficial surfaces.[8] Their innervation source is a terminal buccal branch of the facial nerve that innervates the levator anguli oris muscle.[2]

Because of the role of the levator anguli oris in maintaining the resting position of the oral commissure, it has been proposed as a target for midfacial rejuvenation procedures, namely plication via an intraoral incision to elevate the corner of the mouth.[2] This technique may find an application in the management of flaccid facial paralysis as well. The levator anguli oris muscle is also a component of interest when undergoing lip repositioning or reconstructive surgeries; the muscular and closely-associated mucosal component makes the levator anguli oris and depressor anguli oris ideal tissue donors for lip defects, especially because sphincter tone can be maintained with the transfer of innervated muscle.[10][11] 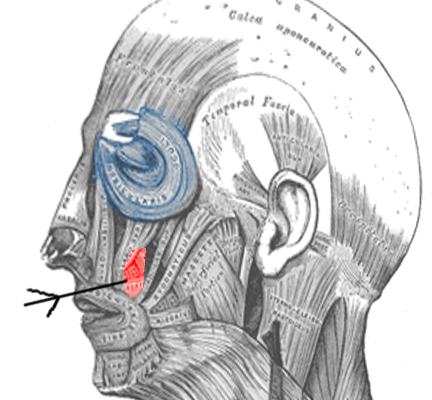