Oral leukoplakia is a white patch or plaque that develops in the oral cavity. The condition is potentially malignant and is strongly associated with tobacco use. This activity describes the evaluation and treatment of oral leukoplakia and the role of the interprofessional team in preventing, recognizing, and managing patients with this condition.

Oral premalignancy is considered as an intermediate stage. It is classified into two broad straplines, premalignant lesions and premalignant conditions. The premalignant lesion is defined as “a morphologically reformed tissue in which oral cancer is more likely to occur than in its seemingly normal counterpart.” An example is leukoplakia. A premalignant condition is defined as “a generalized state associated with a significantly increased risk of cancer.” An example is oral submucous fibrosis. Recently the World Health Organization (WHO) considered premalignant lesions and conditions under a single group of disorders known as Potentially Malignant Disorders. Oral leukoplakia is a potentially malignant disorder affecting the oral mucosa. It is defined as “essentially an oral mucosal white lesion that cannot be considered as any other definable lesion.” Oral leukoplakia is a white patch or plaque that develops in the oral cavity and is strongly associated with smoking. Risk factors include all forms of tobacco use forms, including cigar, cigarette, beedi, and pipe. Other synergistic risk factors include alcohol consumption, chronic irritation, fungal infections such as candidiasis, oral galvanism due to restorations, bacterial infections, sexually transmitted lesions like syphilis, combined micronutrient deficiency, viral infections, hormonal disturbances, and ultraviolet exposure.

The etiology of oral leukoplakia is multifactorial, and many causes are idiopathic.[1] The most commonly associated risk factor is the use of tobacco in either smoked or smokeless form.[2] Additionally, the use of areca (betel) nut preparations in many parts of the world (south and southeast Asia) poses a significant risk, as does the use of snuff and other forms of smokeless tobacco.[3] The role of chronic candidiasis has been linked to the development of leukoplakia, in particular, nonhomogeneous leukoplakia.[4] This role is possibly related to the high nitrosation potential of some candidal forms, suggesting endogenous nitrosamine production. In some cultures, [5] (smoke from the burning end of a cigarette or similar device is retained within the mouth) can produce a wide range of oral mucosal lesions, including leukoplakia. In these populations, such leukoplakias have a 19-fold increase in the risk of malignant transformation compared with those cultures where tobacco is used in other forms.[6]

In yet another study by Brouns et al. showed the prevalence and annual malignant transformation rate of approximately 2% and 1%, respectively.[10] Among the recent studies, leukoplakia was evident in 1.59% of the study sample.[11]

Leukoplakia is more common in middle-aged and elderly males than in other group studies. The prevalence increases with increasing age.

When a tissue cell is exposed to any type of carcinogen, it probably tries to adapt to it. An increase in cell proliferation, shrinking the cytosolic capacity, and the allied organelle load could be an effort in adaptation.[12] In the framework of oral epithelium, a hastened growth phase represented by augmentation of the progenitor compartment (hyperplasia) is the earlier sequelae. When the irritant persists further, the epithelium shows features of cellular degeneration, a well-characterized feature of adaptation (atrophy). When the stage of adaptation and revocable cell damage ends, the cells gradually reach a stage of irrevocable cell damage, manifesting as either apoptosis or malignant transformation. As an adaptative response, the hastened pace of cell division noted at the earlier stages of transformation facilitates further genetic damage, thereby forcefully pushing the cells further along the path to malignant transformation.[13]

Histologically, oral leukoplakias present as either hyperkeratosis, mild dysplasia, moderate dysplasia, severe dysplasia, or carcinoma-in-situ. The dysplasia includes changes in architectural features as well as cytological features of the tissue. Architectural features of dysplasia comprise asymmetrical epithelial stratification, an increased number of mitotic figures in the epithelium, dyskeratosis, drop-shaped rete pegs, and keratin pearls within these rete pegs, loss of polarity of basal cells, and basal cell hyperplasia or anaplasia. While the cytological features include nuclear pleomorphism, cellular pleomorphism, increase in nuclear-cytoplasmic ratio, prominent nucleoli, and hyperchromasia.[14] The classification of mild, moderate, and severe dysplasia is applied when this architectural and cytological atypia affects less than a third, one-third to two-thirds, and more than two-thirds of the epithelium, respectively. Carcinoma-in-situ is the term used when the entire epithelial thickness is involved, in which the dysplasia extends from the basal layer to the overlying mucosa without invading the underlying connective tissue.[15]

Before international attempts to define and refine the World Health Organization's definition of oral leukoplakia, practitioners used many synonyms such as leukoma, smokers patch, leukokeratosis, and ichthyosis. Paget (1860) recognized an association between a white keratotic oral lesion and lingual carcinoma.[16] Butlin (1885) related these lesions to smoking and considered smokers patch to be an early stage of a more advanced white, raised lesion that he called as leukoma. Kramer (1978) had recognized the malignant potential of leukokeratosis and smokers' patch and its relationship to pipe smoking. He suggested the term leukoplakia and described it as a white, elevated lesion involving oral mucosa.[17]

The First International Conference on Oral leukoplakia (1984) in Malmo, Sweden, described leukoplakia as “a white patch or plaque that cannot be described clinically or pathologically as any other disease and is not allied with any physical or chemical causal agent excluding the use of tobacco.”[18]

In 1994, during an international symposium held in Uppsala, Sweden professionals established the definition as a “predominantly white lesion of the oral mucosa which could not be clinically or pathologically characterized as another specific entity.”[19]

Axéll (1996) defined leukoplakia as a white patch measuring 5 mm or more, which cannot be scraped off and cannot be attributed to any other diagnostic disease.[19]

The World Health Organization (1997) described leukoplakia as “a predominantly white lesion of the oral mucosa that cannot be categorized as any other definable lesion.” [20]According to Warnakulasuriya et al. (2007), the term leukoplakia should be used to recognize white plaques of debatable risk having excluded other known diseases or disorders that carry no increased risk for malignancy.[21] WHO finally defined this lesion as “a white plaque with a growing debatable oral cancer risk after excluding other known diseases and disorders that do not increase the risk.”[22]

In the year 2007, at a workshop coordinated by the World Health Organization Collaborating Centre for Oral Cancer and Precancer in the United Kingdom, an expert group discussed issues related to terminology, definitions, and classification of oral precancer. The consensus views of the working group were that the term "potentially malignant disorders," was recommended to refer to a precancer as it expresses that not all disorders designated under this term could transmute into malignancy.[21] Analytically appraising all definitions recommended so far for oral leukoplakia, the working group settled that the word “leukoplakia” should be used to distinguish "white plaques of debatable risk having excluded other known diseases or disorders that bring no increased risk for malignancy."[22] Professionals recommended a framework for diagnosing oral leukoplakia that avoided other oral white disorders being misclassified as leukoplakia.

Another, rarer variant of leukoplakia is known as “proliferative verrucous leukoplakia” is characteristically more widespread and involves different parts of the oral cavity. It is more common in older women. It has the highest chance of turning into malignancy.[23]

Current developments in oral cancer research have steered to the development and expansion of potentially valuable diagnostic tools at the clinical and micromolecular levels for the timely detection of leukoplakia. The gold standard for diagnosis of leukoplakia is always a biopsy from the site of the lesion, but this procedure needs a qualified health-care provider and is considered as an invasive, painful, expensive, and time-consuming procedure. In the case of small lesions, excisional biopsy is indicated, and in large lesions, incisional biopsy, including the adjacent healthy tissue, is removed for histopathological examination.

The main histopathological changes seen are:[24]

Eliminate all contributing factors. In the case of lesions with moderate to severe dysplasia, surgical excision or laser surgery should be the treatment of choice, especially when the lesion is on the ventral and lateral borders of the tongue, soft palate, floor of the mouth, and oropharynx. Close surveillance and follow-up should be mandatory for lesions on other anatomic locations. Surgical removal is the treatment of choice for erythroleukoplakia and proliferative verrucous leukoplakia.[25]

Anywhere from 1% to 9% of patients with oral leukoplakia will develop invasive cancer in the lesion or a frank malignancy. Despite the excision of invasive lesions, recurrence is not uncommon. Oral leukoplakia can spontaneously regress, and hence, their outcomes are difficult to follow with treatment. Overall, once dysplastic changes are seen, the outcomes are guarded.

The following factors increase the risk for malignant transformation of leukoplakia:[26]

Oral leukoplakia is a common presentation in clinics, and the disorder is best managed by an interprofessional team that includes an otolaryngologist, dentist, primary care provider, nurse practitioner, and a pathologist. The key is to educate the patient and eliminate all contributing factors. The patient must be urged to quit smoking. The pharmacist should educate the patient on aids that may help the discontinuation of tobacco. In addition, the patient should stop the use of any irritants like betel nuts. The otolaryngology nurse should emphasize to the patient that the lesions can recur, and malignant transformation is a possibility.

In the case of lesions with moderate to severe dysplasia, surgical excision or laser surgery should be the treatment of choice, especially when the lesion is on the ventral and lateral borders of the tongue, soft palate, floor of the mouth, and oropharynx. Close surveillance and follow-up should be mandatory for lesions on other anatomic locations. Surgical removal is the treatment of choice for erythroleukoplakia and proliferative verrucous leukoplakia.[25]

For people who continue to smoke, recurrences are common. The only way to lower morbidity and improve outcomes in patients with oral leukoplakia is with open communication between team members who continue to educate the patient. 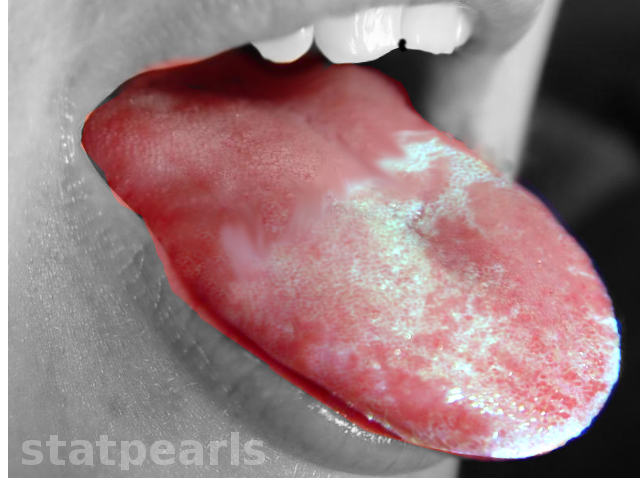 Field EA,Field JK,Martin MV, Does Candida have a role in oral epithelial neoplasia? Journal of medical and veterinary mycology : bi-monthly publication of the International Society for Human and Animal Mycology. 1989;     [PubMed PMID: 2689621]

Kumar Srivastava V, To Study the Prevalence of Premalignancies in Teenagers having Betel, Gutkha, Khaini, Tobacco Chewing, Beedi and Ganja Smoking Habit and Their Association with Social Class and Education Status. International journal of clinical pediatric dentistry. 2014 May;     [PubMed PMID: 25356006]