The thigh muscles are divided into groups based on location and dynamic function. These groups include the hip/thigh adductors, abductors, quadriceps, and hamstring muscles. Understanding the main function of each group of muscles along with the unique properties of muscles within a group will help identify different disorders based on physical exam and patient history.[1][2]

Limb bud development begins after the mesenchymal cells are activated in the lateral plate of the mesoderm. The lower limbs develop after the development of the upper limbs begins. This process usually starts at the 4-week gestational period, with the limbs well differentiated by weeks 8 to 10.

The veins of the lower extremity are described based on their position relative to the fascial compartment. The superficial veins are above the deep fascia and are the drainage system of the cutaneous circulation. The deep veins are below the fascia and drain the musculature.

The major deep veins of the thigh follow the same nomenclature of the arteries of the lower leg except for the femoral vein, which is an extension of the popliteal vein. The main artery of the thigh is the femoral artery. The femoral artery is an extension of the external iliac artery and becomes the femoral artery after it crosses under the inguinal ligament. The main branches include the medial circumflex, lateral circumflex, and the profundal femoris artery. The medial circumflex wraps around the posterior side of the femur and supplies the head and neck of the femur, while the lateral circumflex wraps around the lateral anterior aspect of the femur. The perforating branches are composed of 3 or 4 arteries perforating the adductor magnus supplying the medial and posterior thigh.

The lumbar plexus supplies innervation to the femoral (L2 through L4), lateral femoral cutaneous (L2, L3), obturator (L2 through L4), and saphenous nerves (L2 through L4). The femoral nerve supplies innervation (sensation and motor) to the anterior thigh. The obturator nerve sensitizes to the medial thigh and motor function to the adductors. The saphenous and lateral femoral cutaneous nerves are both strictly sensory innervating both the medial aspect of the leg and lateral thigh, respectively.[5][6]

The hip flexors are composed of the iliacus, psoas, sartorius, and pectineus. The iliacus and the psoas are both flexors of the thigh in relation to the torso and receive blood supply from the lumbar branch of the iliopsoas of the internal iliac artery. Innervation to the iliacus is by the muscular branch of the femoral nerve (L1 through L3), while the direct fibers of L1 innervate the psoas through L3 lumbar plexus. The sartorius is unique in that it flexes and laterally rotates the hip joint and flexes the knee, is innervated by the femoral nerve (L2 through L4), and receives blood supply by the muscular branches of the femoral artery. The pectineus is also unique as it adducts the thigh and flexes the hip; it is usually innervated by the femoral nerve but is sometimes innervated by the obturator nerve. Its blood supply is from the medial circumflex femoral branch of the femoral and obturator artery.

The four muscles in the extensor group are the vastus lateralis, vastus intermedius, vastus medialis, and rectus femoris. All four function to extend the knee, but the rectus femoris is also an accessory flexor of the hip. All muscles in this group are innervated by the L2 through L4 branches of the femoral nerve, and the lateral femoral circumflex artery supplies all muscles in this group except for the vastus medialis, which receives its blood supply from the femoral artery, profunda femoris artery, and superior medial genicular branch of the popliteal artery.[7]

The adductors of the thigh are the adductor longus, adductor brevis, adductor magnus, and gracillis. The longus, brevis, and magnus all adduct and flex the thigh. The longus and brevis rotate the hip joint laterally and share the blood supply of the obturator and medial circumflex femoral arteries. The longus is unique because it is innervated by the anterior division of the obturator nerve (L2, L3, L4). The unique feature of the adductor brevis is that the innervation can be from either the anterior or posterior division of the obturator nerve. The adductor magnus differs as it is considered the most powerful adductor of the thigh; the superior horizontal fibers flex the thigh while the vertical fibers extend the thigh. The magnus is also different due to dual innervation and different blood supply. A majority of the magnus is innervated by the obturator nerve, while the vertical (hamstring) portion is innervated by the tibial nerve (L2 through L4). The magnus blood supply is from the medial circumflex femoral artery, inferior gluteal artery, first through fourth perforating arteries, obturator artery, and some superior muscular branches of the popliteal artery. The gracilis medially rotates the tibia on the femur and flexes the knee. Innervation is by the anterior division of the obturator nerve (L2, L3) and receives its blood supply from the obturator artery, medial circumflex artery, and muscular branches of the profundal femoris artery.

The hamstrings are composed of the semitendinosus, semimembranosus, long and short heads of the biceps, all of which flex the knee. Both heads of the biceps femoris also rotate the tibia laterally. The long head additionally extends the hip. The semitendinosus and semimembranosus have the functions of extending the thigh and rotating the tibia medially, especially when the knee is flexed.[8][9] All of the hamstring muscles except the short head of the biceps femoris are innervated by the tibial nerve (L5, S1, S2), which is innervated by the common peroneal nerve. Blood supply to all four muscles is from the perforating branches of the profunda femoris artery, inferior gluteal artery, and the superior muscular branches of the popliteal artery.

Understanding the anatomy of the thigh is of utmost importance in the surgical setting for several reasons. Many of the approaches of the thigh are through intramuscular planes. Operating safely through these planes minimizes neurovascular injury during the perioperative period.  If a complication does occur, understanding the anatomy allows the clinician to identify the area of pathology promptly.[10] Understanding the origins and insertions of the different muscles gives the surgeon the knowledge to identify the appropriate tendinous portion of muscle utilized for grafts to prevent morbidity as several thigh muscles are used for graft reconstruction of the ACL.[9] From an anesthesia perspective, peripheral nerve blocks are often performed during surgery to minimize pain postoperatively. The correct nerve must be identified to minimize patient discomfort and optimize pain control.

Understanding the anatomy of the thigh can assist the physician in identifying pathology during a physical exam.  As part of the comprehensive history and physical examination, understanding specific muscle functions and actions aids the clinician in identifying and differentiating isolated/focal injuries from more widespread or systemic conditions. The latter ranges from peripheral nerve entrapment, spinal conditions and pathologies (i.e., radiculopathy with associated nerve root compression(s)), and medically relevant medical conditions (i.e., genetic conditions, diabetes, neuropathy, or inflammatory conditions) 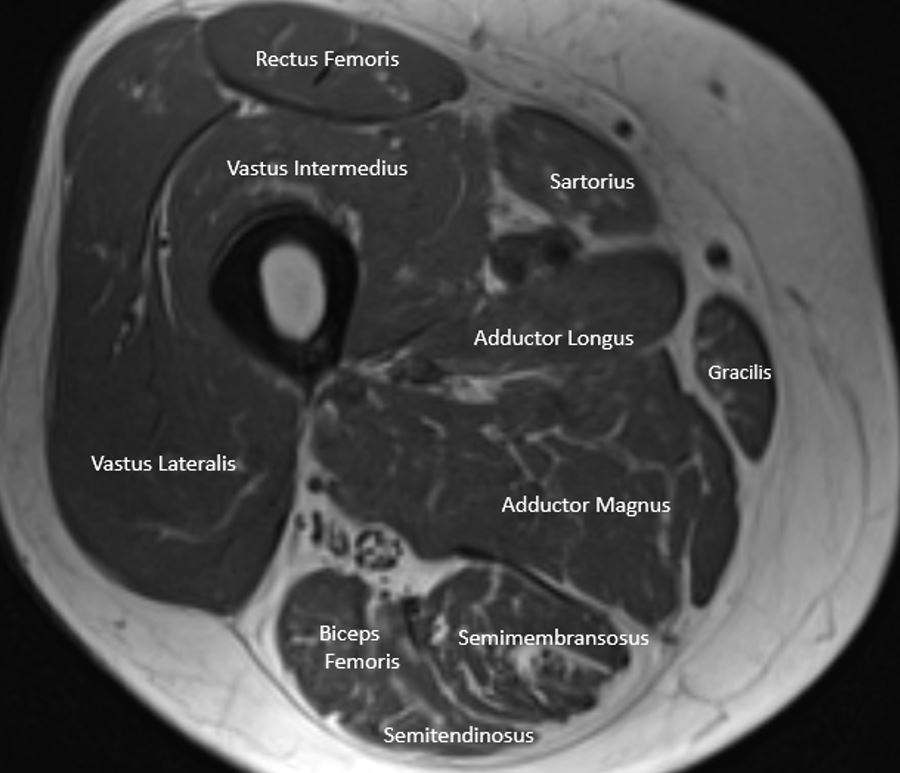