Left ventricular false aneurysm, also known as pseudoaneurysm, is a rare and highly morbid pathology. It most commonly presents as a complication of myocardial infarction (MI). It occurs when an ischemic left ventricular free wall rupture (due to acute infarction) is contained as a hematoma communicating with the ventricular cavity. The rupture could become sealed by an adherent pericardium, organizing hematoma, thrombus, or scar tissue and gives the appearance of an aneurysm.[1][2] The wall of the false aneurysm consists only of fibrous tissue or pericardium and lacks the true layers of the ventricle (endocardium and myocardium).[3] False aneurysms tend to appear on the posterior and lateral wall segments and demonstrate a tightened neck compared to the aneurysm sac diameter.[4] These aneurysms have a higher propensity to rupture and necessitate timely diagnosis and management.[2]

Female gender, older age, history of hypertension, and lack of collateral circulation after MI are risk factors for the development of left ventricular false aneurysms.[5] These aneurysms primarily result from ventricular wall weakness following a transmural myocardial infarction. Other causes of a false aneurysm include cardiac surgery, chest trauma, congenital heart disease, tumor invasion, and in rare instances, endocarditis.[1][6][7] Inferior MIs lead to twice as many false aneurysms compared to anterior wall infarctions, potentially due to the relatively thinner inferior wall.[1] Trauma from cardiac surgery is the second leading cause, with mitral valve surgery being the most likely culprit followed by operations for congenital disease and aortic valve disease.[8] False aneurysms can also occur after transapical or transfemoral transcatheter aortic valve replacement and blunt and penetrating chest trauma. Congenital heart disease can lead to aneurysms in the subvalvular area of the mitral and aortic valves. They occur because of decreased strength of the annular attachment to the myocardium. Other less common causes include tuberculosis, syphilis, rheumatoid arthritis, Kawasaki disease, and Behcet syndrome.

Left ventricular false aneurysm is a rare condition and develops in 0.1% of the patients following myocardial infarction and in 0.8% of patients after mitral valve replacement surgery.[8][9] According to one pooled study, the mean age at presentation was 60 years, with the majority being White race (75%) and male (67%).[10] Untreated left ventricular false aneurysms have a 30-45% chance of rupture.[11]

A left ventricular false aneurysm often occurs within 3 to 14 days after MI but can be seen up to 12 months post-MI.[11] The mechanism is thought to result from increased macrophage activity in the infarcted tissue, resulting in remodeling of the necrotic myocardium and thinning of the tissue. Due to an inflammatory and pro-thrombotic state during that period, wall rupture is sealed as a false aneurysm.[7] After cardiac surgery, these false aneurysms develop in regions weakened during the procedure, such as sites of incision, vent placement, and ventriculotomy. Periannular trauma during mitral valve surgery has led to false aneurysm formation in the posterior subannular area due to the excision of the extra leaflet and annular tissues. Other mitral surgery risks include suturing methods, insertion of a large prosthesis, and redo surgery. False aneurysms develop in the subaortic area in aortic valve replacement procedures, possibly due to intrinsic fragility of the aortic root and postop hyperkinesis, which generates aberrant pressures in the left ventricular cavity. Congenital heart disease correction operations can result in false aneurysms due to conduit placement or outflow tract reconstruction.

Patients can present with several diverse, nonspecific symptoms, and up to 10% may be asymptomatic. In others, chest pain, palpitations, dyspnea, and syncope are common symptoms. Vague symptoms such as cough, fever, dizziness, shoulder or back pain, dysphagia, congestive heart failure, and stroke may also be present.[9]

Physical examination signs are also often nonspecific. Patients may have bradycardia, hypotension, decreased heart sounds, pericardial friction rub, and a murmur. Signs of arrhythmia, heart failure, and tamponade due to the rupture of the false aneurysm can also occur. Trauma patients should be assessed for myocardial contusion as it can go undiagnosed.[12]

Cardiac magnetic resonance (CMR) can be used in the diagnosis and will demonstrate the absence of endocardium and myocardium along with the aneurysm. CMR is an effective test to assess myocardial function, contractility, tissue perfusion, and turbulent blood flow in the cardiac chambers and across the false aneurysm.[9]

Computed tomography (CT) will depict the abrupt ending of the heart wall at the boundary of the aneurysm. CT is instrumental in redo cardiac surgeries as it offers higher quality noninvasive angiography of native coronary arteries and bypass grafts important in the surgical management of false aneurysm patients.

Intraoperative transesophageal echocardiography (TEE) can show lesion location, dimensions, presence of thrombus, and involvement of other cardiac structures.[1] It can also clearly demonstrate the bidirectional turbulent blood flow through the orifice between the left ventricle and the aneurysm sac.[9]

A chest x-ray can show an abnormal mediastinal contour with a bulge on the lateral or posterior aspect of the heart.[2][11] In rare instances, chronic left ventricular false aneurysms can calcify and get picked on an X-ray.

Electrocardiograms can depict vague variations and inversion of T waves in inferior or lateral leads.[1]

The only definitive treatment for left ventricular false aneurysms is surgery.  The goal is to exclude the aneurysmal segment and restore left ventricular size and shape. Median sternotomy is the preferred approach. Full cardiopulmonary bypass is instituted, and aortic cross-clamping is necessary.  The literature has published several repair techniques, but all aim to exclude the aneurysmal sac and restore normal left ventricular geometry. One method of patch repair is described here. The aneurysm wall is incised, and any indwelling thrombus is aspirated and evacuated. The tissue is debrided back to healthy myocardium. The myocardial defect is then measured, and a Dacron patch cut to approximately 2 to 3 cm larger than the diameter of the defect. This patch is then sutured in place to cover the defect. Interrupted pledgeted mattress sutures are placed through the healthy myocardium and then through the patch. It is essential to ensure large, generous bites of healthy tissue. The Dacron patch is lowered into place and secured. A second layer of running suture can be placed to aid with hemostasis.

Percutaneous embolization can be a consideration in non-surgical candidates. This method is contraindicated in cases of active endocarditis or the presence of thrombus in the left atrium. Right, and left heart catheterization is performed to evaluate the pressures inside the heart, and the left ventriculogram checks the anatomy and wall motion of the left ventricle. A catheter is inserted through the femoral incision and progressed to the left atrium, where a guide catheter is used to target the false aneurysm. Embolization coils are led into the false aneurysm sac and neck, or the site of communication between the left ventricle and false aneurysm is closed off with an Amplatzer vascular plug.[13]

Regular follow up evaluations to monitor the progression of false aneurysms are important.[14] Small-scale studies have shown that asymptomatic patients with an incidental diagnosis of false aneurysms with small aneurysm size (less than 3 cm) and patients unfit for surgery are manageable medically.[9] Patients should be on an appropriate treatment plan receiving beta-blockers, angiotensin-converting enzyme (ACE) inhibitors, and anti-platelets and/or anticoagulants to reduce the risk of clot formation.[15][16] In patients awaiting surgical management, anti-impulse therapy requires optimization. ACE inhibitors are employed to reduce stress by decreasing the afterload, which is the key to preventing aneurysm rupture.

A left ventricular diverticulum can also be confused with a false aneurysm. This condition is a rare cardiac anomaly with a 0.42% prevalence in adults. Congenital cases are more common than acquired cases, which are mostly due to infection or trauma.[19] The diverticulum can range from 5 to 90 mm and usually forms in the 4th embryonic week. On a transesophageal echocardiogram, it is visible as a bird-beak cavity originating from the left ventricle with a normal ejection fraction. CMR will show the presence of all layers of the myocardial wall with a wide or narrow neck communicating with the ventricle on contrast enhancement.[19]  Surgery is an option for symptomatic patients, while asymptomatic patients can receive conservative management.

Due to the intrinsic weakness of the false aneurysm sac, the dyskinetic movement of the heart can result in arrhythmias, clot formation, and even heart failure.[1] The expected sequela of a false aneurysm is the rupture of the adherent sac.[14] Increased survival and improvement of symptoms is noted in patients who undergo surgical repair. Improvement in surgical techniques, percutaneous interventions, and patient management have led to perioperative mortality to be near 10%.[20] However, patients have known to be alive even after medical management only. Aggressive blood pressure control, anticoagulation, and heart failure management are necessary for those managed medically.[21]  Long term survival has also occurred with spontaneous neck closure of the false aneurysm.

The most feared complication with medical management is the rupture of the false aneurysm. Of those who survive medical management, stroke is the next most concerning due to thrombus that is often within the false aneurysm sac. Complications following surgery are similar to those for other complex open-heart operations, including death, hemorrhage, arrhythmia, stroke, and infection. Rarely, patients may form recurrent false aneurysms after the initial repair, presumably due to inadequate apposition of the patch to healthy myocardium or if the patch was sutured to the pseudoaneurysmal tissue.  Other complications after surgery can result from the excessive reduction of left ventricular cavity volume.

After a transcatheter approach to close the false aneurysm, the patient can have bleeding, hematoma formation, and infection at the site of the femoral incision. The catheter itself can lead to the perforation of myocardial walls and the development of new arrhythmias necessitating the use of pacemakers.[13]

Patients should be educated to follow up regularly with their physicians after an episode of MI or following cardiac surgery. They should be advised to note the development of new or prolonged chest pain, change in their energy levels, and the onset of new palpitations or a general decline in their health and physical fitness. Few studies have demonstrated vague presenting symptoms, and if patients experience arm, back, or epigastric pain that does not resolve following a cardiac event, they should pursue a medical evaluation.

Coordination amongst heart and interprofessional team members is critical in any patient suspected of having a left ventricular false aneurysm. Close collaboration between cardiology, internal medicine, emergency medicine, and cardiac surgery can help ensure adequate blood pressure management and the timing of surgical intervention. Cardiac surgery must be involved early in the care process as urgent or emergent surgery is necessary in many cases. The role of the cardiovascular nurse is crucial, from preoperative preparation, assisting during the procedure, and in the postoperative management of patients discovering and reporting untoward complications to the team. These patients are prone to arrhythmias, low ejection fraction, and bleeding. Hence, close communication with the surgeon is critical. Because of the relative rarity of this diagnosis, regular education of these interprofessional team members can help maintain an adequate knowledge base, which will allow maximum contribution from each clinical area. An interprofessional team approach will result in the best outcomes in treat left ventricular false aneurysm. [Level V] 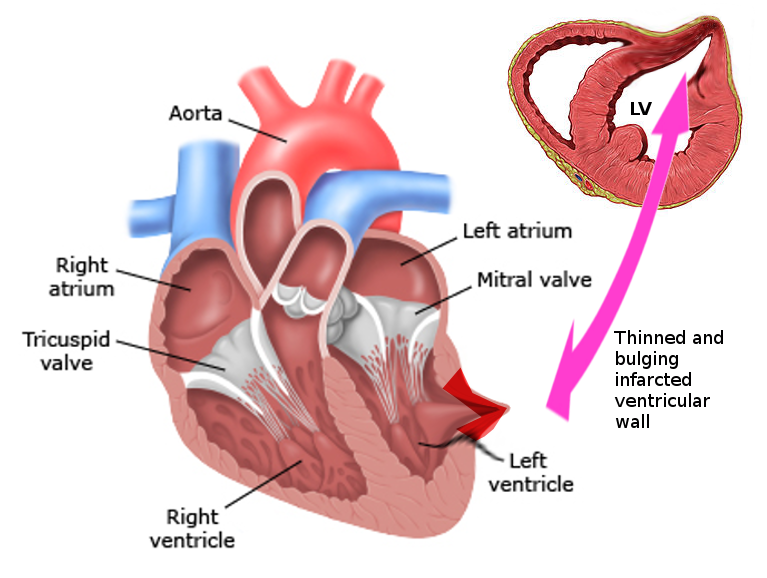 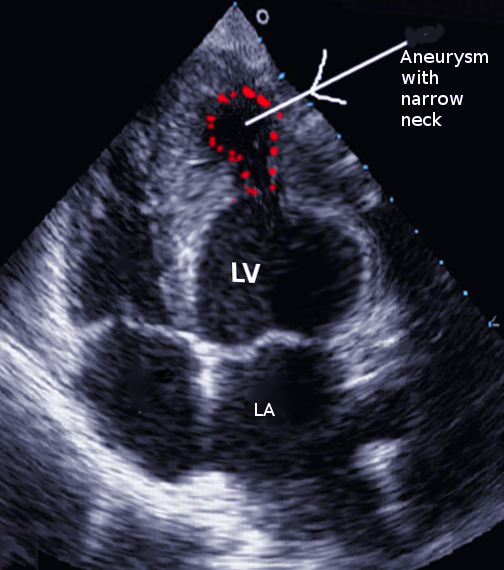