Le Fort fractures account for 10% to 20% of all facial fractures. These may be potentially life-threatening and disfiguring in patients in whom the injury is significant.

Le Fort injuries occur with high-impact force when energy transfer to the body exceeds the tolerance of impacted tissue. Beware that these complex injuries seldom occur in isolation and are often associated with concomitant or life-threatening injuries.[7][8][9]

These fractures (trans-maxillary fracture) result from a force directed low on the maxillary rim in a downward direction. This occurs in the horizontal plane at the level of the base of the nose. A direct blow to the lower face causes fractures that involve all 3 walls of the maxillary sinus and pterygoid processes. The fracture extends around both maxillary antra, through the nasal septum and the pterygoid plates. This causes palate-facial separation. However, this fracture does not involve the glabella or zygoma.

This pyramidal fracture occurs due to trauma to the midface. The fracture line begins in the region of the bridge of the nose (nasion) and extends obliquely through the medial aspect of the orbits and inferior orbital rims. It then continues posteriorly in a horizontal fashion above the hard palate to involve the pterygomaxillary buttresses, resulting in a disarticulation of the pyramid-shaped facial skeleton from the remainder of the skull. Note that the zygoma remains attached to the cranium.

Also called cranial-facial separation, the fracture line in this injury passes from the nasofrontal area across the medial, posterior, and lateral orbital walls, the zygomatic arch, and through the upper portion of pterygoid plates.

Transverse fracture through the maxilla above the roots of the teeth, separating teeth from the upper face. These can be unilateral or bilateral.

These fractures extend superiorly in the midface to include the nasal bridge, maxilla, lacrimal bones, orbital floor, and rim. They are pyramidal fractures with teeth at the base and nasal bone at the apex. These fractures are typically bilateral.

This type of fracture starts at the bridge of the nose and extends posteriorly along the medial wall of the orbit and the floor of the orbit, and then through the lateral orbital wall and the zygomatic arch. The fractures run parallel with the base of the skull, separating the entire midfacial skeleton from the cranial base. This discontinuity between the skull and the face is termed craniofacial dissociation. This may be associated with a cerebrospinal fluid (CSF) leak.

These fractures result from an impact to the nasal bridge or upper maxilla. This results in complete craniofacial dysjunction.

Le Fort type I presents as a swollen upper lip, anterior open bite malocclusion, ecchymosis of the maxillary buccal vestibule and palate, and mobility of the maxilla.

With a Le Fort type II fracture, there is significant deformity and swelling, widening of the intercanthal space (nasal septum fracture), mobility of the maxilla and nose as a combined segment, as well as bilateral periorbital edema and ecchymosis (raccoon eyes), epistaxis, anterior open bite malocclusion, ecchymosis of the maxillary buccal vestibule and palate, and possible CSF rhinorrhea. Since the fracture involves the inferior orbital rim and floor, there may be sensory deficits in the infraorbital region extending inferiorly to the upper lip.

Airway obstruction associated with fractures of the midfacial skeleton can be life-threatening if not recognized promptly and treated appropriately. Orotracheal intubation is required when intranasal damage is a possibility. Airway obstruction in Le Fort injuries mainly occurs due to multiple sources bleeding into the upper airway, as well as midface altered airway anatomy. Beware that the risk of life-threatening hemorrhage in Le Fort II and III injuries is higher than that associated with other facial injuries.

Maxillofacial trauma is an obvious threat to the patient's airway; therefore, a rapid evaluation must be performed to determine the need for a definitive airway. The concept of the definitive airway in cases of maxillofacial trauma is probably much more critical as compared to trauma to other body parts; therefore, an emergency airway may be required.

In a patient with complex maxillofacial trauma, cervical spine fracture should always be considered unless proven otherwise. Therefore, the cervical spine must be protected while providing airway management.

During the secondary survey, the assessment of maxillofacial fractures is performed after initial stabilization and resuscitation of the multisystem trauma patient. An ophthalmologic evaluation is required in Le Fort II and III fractures with orbital involvement. This should be completed before surgery to ensure there is no globe injury.

The mobility of the face should be tested on both sides as well as in the midline. The type of Le Fort fracture is determined by which regions are mobile.

A CT scan of facial bones is required to fully and adequately assess the extent of bone and soft tissue involvement. Plain radiographs are not sufficient for evaluation. Beware that penetrating trauma to the midface may involve injury to the brain and major vascular structures. Therefore, a CT scan of the head and diagnostic angiography should also be considered.

Antibiotic prophylaxis in patients with CSF leak remains controversial and should be considered at the discretion of the treating neurosurgeon.

The outcome is dependent on the mechanism of injury, location, and severity of injury, and presence of associated injuries. The mortality rate for Le Fort fracture is higher than simple midface fracture.

Early consultation with a facial surgeon when evaluating a patient with severe facial trauma is essential.

In the presence of a CSF leak, neurosurgical consultation should be obtained early.

In the presence of orbital involvement, an ophthalmologic evaluation should be obtained.

Le Fort fractures rarely occur in isolation; always evaluate for other injuries. Le Fort-type fractures should be suspected if a pterygoid fracture is noted on a facial CT scan. These 3 fracture types may occur in combination either on the ipsilateral or contralateral side. The management goals are the restoration of form and function.

LeFort fractures are not uncommon and often present to the emergency department. Because these fractures are also associated with other facial, skull and ocular injuries, an interprofessional team must be involved. The trauma surgeon should call the appropriate specialist after workup. The decision to operate on these patients depends on the stability of the fracture, compromise of neural and ocular elements, and bleeding. Even after treatment the recovery is often prolonged and most patients do have some residual neurological or visual deficit. The role of the primary care provider and nurse practitioner is to educate patients on safety in sports, wearing seatbelts while driving and wearing helmets when riding motorbikes.[13] 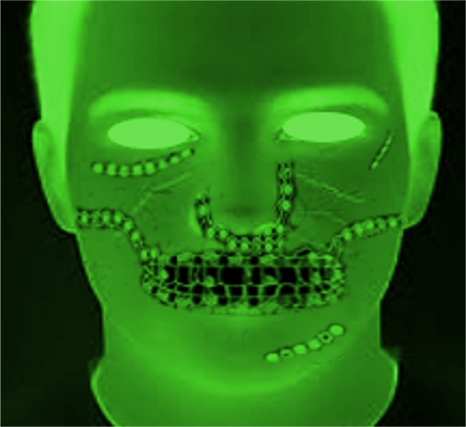