Laugier-Hunziker syndrome, also known as Laugier-Gerbig-Hunziker syndrome or Laugier-Hunziker-Baran syndrome or idiopathic lenticular mucocutaneous pigmentation, is a hereditary pigmentary disorder characterized by a unique expression of pigmentation over the mucosal, nail, and acral sites. It is commonly mistaken for Addison's disease, Peutz Jeghers syndrome, Cronkhite-Canada syndrome. The condition is known to be benign nevertheless a few associations with esophageal melanocytosis, actinic lichen planus, hypocellular bone marrow, and thrombocytopenia have been reported. This activity presents the clinical presentation, evaluation, and management of Laugier-Hunziker syndrome and highlights the role of the interprofessional team in the management of affected patients.

The condition is known to be benign; nevertheless, a few associations with esophageal melanocytosis, actinic lichen planus, hypocellular bone marrow, and thrombocytopenia have been reported.[3]

Due to its close semblance to more serious conditions such as Addison disease, Peutz-Jeghers syndrome, Cronkhite-Canada syndrome, and lentiginosis profusa, this is usually classed as a diagnosis of exclusion.

The most plausible mechanism for this syndrome is the presence of altered melanocytes in the epidermis.[4] The description is that of L-3,4 dihydroxyphenylalanine reactive melanocytes seen as large dendritic melanocytes. These cells are then capable of increasing melanogenesis.

Laugier-Hunziker syndrome has more frequently been reported in the Asian population and displays a higher incidence in the Chinese population.[5][6] Cases have also been reported in European regions such as France and Italy. Based on gender predilection, a significant female preponderance has been described. Familial cases usually follow autosomal dominant as well as recessive traits, while sporadic cases are not uncommon.[6][7]

There have been juvenile and adult cases that carry specific disease presentation features but show increased severity in adult form.

Juvenile cases have been reported between the ages of 10 and 22 years, while most adult cases are seen between 43 and 55 years of age. The unique features are better described according to the sites affected.

Mucosal involvement is characterized by well-defined light brown to brown-black macules usually of size 0.1 to 0.5 cm over the oral and genital mucosa. Oral lesions are present over labial mucosa, buccal mucosa, hard palate, tongue, and posterior pharyngeal mucosa while genital lesions are seen on the glans and shaft of the penis in males and vulva in females. A few cases of isolated tongue pigmentation have been reported.

Acral or cutaneous involvement manifests as sharply marginated light brown to black lenticular macules and patches approximately 0.5 to 1.5 cm in size, specifically seen over distal two-thirds of all digits of the upper limb and bilateral plantar surfaces. Besides this, the lesions extend dorsally by involving the medial and lateral borders of digits.[2][8]

Nail involvement is seen in two-thirds of cases and can be divided into 4 types based on the extent of pigmentation.

However, one or all types may be seen in the same patient. One striking feature of nail involvement is nail fold pigmentation termed as pseudo-Hutchinson’s sign.[9]

With Laugier-Hunziker syndrome, owing to the insidious, although asymptomatic nature of the condition, there is delayed attendance years after onset is usually seen. A thorough history and clinical examination for signs of fatigue, weight loss, gastrointestinal (GI) involvement, and drug intake are necessary.

In the context of the exclusion of other disorders, investigations for the following are usually carried out after a complete physical examination and routine investigations.[5]

The goal of therapy is purely cosmetic in cases of Laugier-Hunziker syndrome.

The differential diagnosis and their differentiating features include:

Disorders that display pseudo-Hutchinson sign include Peutz-Jeghers syndrome, subungual hematoma, Bowen disease, and AIDS, while the true Hutchinson sign is specific to melanoma.

The pigmentary lesions of Laugier-Hunziker syndrome usually respond poorly to therapy, and it displays high recurrence. Of particular note of is sun avoidance following successful therapy, which has demonstrated lower rates of recurrence.[14]

Reports of esophageal melanocytosis, actinic lichen planus, hypocellular bone marrow, and thrombocytopenia have been reported; however, these disorders are more likely coincident findings and not directly related to Laugier-Hunziker syndrome.[3] A recent report of pancreatic malignancy warrants evaluation in suspected cases.[13]

Laugier-Hunziker syndrome is a rare disease, and diagnosis may be challenging. A coordinated team approach between primary care nurse practitioners, physician assistants, physicians, and dermatologists is necessary to provide the best care of patients with this condition. [Level 5] 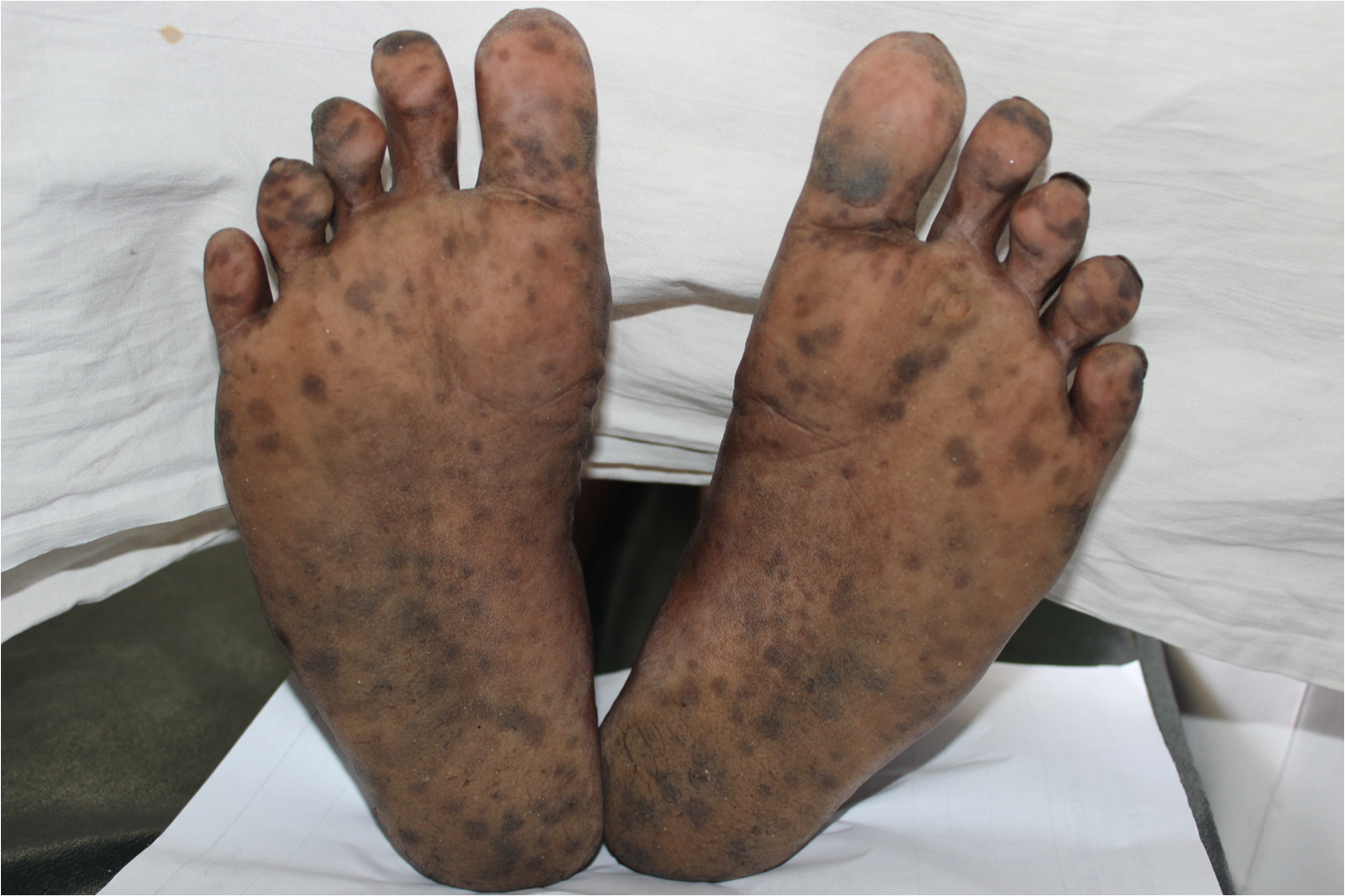 Moore RT,Chae KA,Rhodes AR, Laugier and Hunziker pigmentation: a lentiginous proliferation of melanocytes. Journal of the American Academy of Dermatology. 2004 May     [PubMed PMID: 15097932]