The larynx is a cartilaginous segment of the respiratory tract located in the anterior aspect of the neck. The primary function of the larynx in humans and other vertebrates is to protect the lower respiratory tract from aspirating food into the trachea while breathing. It also contains the vocal cords and functions as a voice box for producing sounds, i.e., phonation. From a phylogenetic view, the larynx in humans has achieved its highest evolutionary development with the capacity to articulate speech, which is absent in invertebrates and fishes. The larynx is about 4 to 5cm in length and width, with a slightly shorter anterior-posterior diameter. It is smaller in women than men, and larger in adults than children owing to its growth in puberty. A large larynx correlates with a deeper voice.

The larynx is a cartilaginous skeleton, some ligaments, and muscles that move and stabilize it and a mucous membrane.

The thyroid cartilage functions as a protective shield surrounding the anterior part of the larynx and spans vertically from the superior to the inferior regions. It is the largest of all six cartilages and has the form of a half-opened book with the back facing the front, with the two halves meeting in the middle forming a protrusion called the laryngeal prominence, popularly known as Adam’s apple.

The cricoid cartilage is also known as the cricoid ring or signet ring as it is the only cartilage to encircle the trachea completely. It sits in the inferior part of the larynx, at the level of C6 vertebra, and has two parts: the anterior part also called the arch, and the posterior portion, much wider than the anterior, referred to as the lamina.

The epiglottis is an elastic cartilaginous leaf-shaped flap covering the opening of the larynx. It is attached to the internal surface of the thyroid cartilage and projects over the pharynx, allowing the passage of air into the larynx, trachea, and lungs. As the hyoid bone rises, it draws the larynx upwards during swallowing to allow food or drink into the esophagus, and to prevent food from entering the trachea.

As for the second set of cartilages, there are three paired cartilages.

Arytenoid cartilages are a pair of small, hard but flexible pyramid-shaped cartilages that sit over the posterior portion of the cricoid cartilage. The base of each cartilage has two processes: the anterior angle is the vocal process, and the lateral angle is known as the muscular process.

The cuneiform cartilages, also known as the Wrisberg cartilages, are two elongated fibrous pieces of yellow cartilage placed one on either side in the aryepiglottic fold. They have no direct attachment to other cartilages but serve to support the vocal folds and the lateral aspects of the epiglottis.

The extrinsic ligaments are the thyrohyoid, hyoepiglottic and cricotracheal ligaments. The thyrohyoid ligament or membrane attaches the posterior surface of the body of the hyoid bone and the upper border of the thyroid cartilage. The hyoepiglottic ligament connects the surface of the epiglottis with the upper border of the hyoid bone. The cricotracheal ligament connects the cricoid ligament with the first ring of the trachea.

The internal space of the larynx extends along the laryngeal inlet to the lower border of the cricoid cartilage. It is pyramid shaped with its superior base pointing to the tongue and its apex to the trachea. It has a base, an apex, and three parts, one posterior and two laterals.

The posterior part of the internal space of the larynx is part of the anterior wall of the pharynx and has two vertical recesses referred to as the piriform sinus. The form of the lateral aspects is determined by the larynx cartilages and consist of three parts, a superior one that matches the thyroid cartilage, an inferior one that matches the cricoid cartilage, and a middle one called the cricothyroid space. Larynx apex forms a hole that joins to the trachea. The base of the larynx is oval shaped and communicates with the pharynx.

The internal space of the larynx is wide in the superior and inferior parts but narrows in the middle, forming a section named glottis, and dividing all the spaces into three sections: supraglottic, glottis, and infraglottic.

The vocal cords, the glottis, and the larynx ventricles comprise the glottic space.

The glottis is the portion of the laryngeal cavity formed by the four vocal folds and the opening between the folds.

The laryngeal ventricles or Morgagni sinus are a fusiform fossa situated between the superior (true vocal folds) and the inferior vocal cords (vestibular folds).

The subglottic section is the space below the glottis and has an inverted bottleneck shape limited by the vocal cords and the trachea.

The supraglottic section forms an oval cavity, extending along the free edge of the epiglottis and the aryepiglottic folds down to the arytenoid cartilages, the hyoepiglottic ligament is usually considered the roof of this cavity.

The first human larynx can be traced to the primitive pharyngeal floor, in the first four weeks of intrauterine life, as a longitudinal notch, known as the laryngotracheal groove. This groove will eventually form the esophagotracheal septum around the fifth week of embryonic life, with the respiratory system anteriorly and the esophagus lying on the dorsal side.

The connective tissue, smooth muscles, and cartilages that will form the larynx arise from splanchnic mesenchyme located ventral to the foregut. The larynx cartilages develop from the third, fourth and sixth pharyngeal arches. In this period, primitive glottis has a T-shaped form, as a result of some paired arytenoid swellings, produced by the proliferation of the mesenchyme, that will reduce the laryngeal lumen to a small opening. The laryngeal epithelium quickly develops, and temporary obliterates the laryngeal lumen, and become re-canalized in the tenth week when the epithelium breaks up. The future vocal cords from by a pair lateral depressions joined to the anterioposterior folds of the mucous membrane.

The superior laryngeal nerve is a branch of the vagus nerve (X cranial nerve), arising from the inferior ganglion of the vagus nerve. It also receives branches from the superior cervical ganglion of the sympathetic nervous system, and descends between the carotids vessels and pharynx, reaching the larynx just below the hyoid bone where it divides into two branches, the internal and the external. The external laryngeal nerve supplies the cricothyroid muscle. The internal laryngeal nerve descends to the thyrohyoid membrane along with the superior laryngeal artery, spreading out across the epiglottis, and supply the mucous membrane surrounding the entrance of the larynx.

The inferior laryngeal nerve or recurrent nerve is the principal nerve responsible for the innervation of all intrinsic muscles of the larynx, except for the cricothyroid muscle. The right and left recurrent nerves are not symmetrical.

The left recurrent nerve arises from the vagus nerve bellow into the thorax, looping around the aortic arch (whereas the right recurrent nerve loops around the subclavian artery) and passes upwards to the trachea and esophagus before entering the larynx just posterior to the cricothyroid joint underneath the inferior constrictor muscle.

The right recurrent nerves branch off the vagus in the base of the neck, looping the subclavian artery, go upward lateral to the trachea, and enter the larynx between the cricoid and thyroid cartilages.

The laryngeal muscles divide into intrinsic muscles, the primary function of which is voice production, and extrinsic muscles that move the larynx. We shall proceed to examine the former before the latter.

The cricothyroid muscle has two concave surfaces, the superior and inferior; it attaches to the cricoid arch and the lower lamina of the thyroid to the superior belly and the inferior cornu the inferior belly. These muscles produce elongation of the vocal folds, resulting in higher pitch phonation.

The thyroarytenoid muscles arise from the thyroid cartilage and the middle cricothyroid ligaments and insert into the arytenoid cartilages. These muscles relax and approximate the vocal folds.

The extrinsic larynx muscles are paired and allow the movement of the larynx.

The thyrohyoid muscle inserts on the thyroid cartilage and the body of the hyoid bone. The receives innervation from the first cervical nerve, along with the hypoglossal nerve. Its primary function is to depress the hyoid bone thus elevating the larynx.

The sternothyroid muscles are situated beneath sternohyoideus muscle; they arises from the sternum and first rib and goes to the lamina of the thyroid cartilage, and are innervated by the ansa cervicalis. These muscles depress the larynx.

The inferior pharyngeal constrictor muscles extend from the cricoid and thyroid cartilages to the pharyngeal raphe. These muscles are innervated by the vagus nerve via branches of the pharyngeal plexus and recurrent laryngeal nerve and narrow the pharynx diameter to contribute to swallowing.

The stylopharyngeus muscles stretch from the styloid process in the temporal bone to the thyroid cartilage. These muscles receive their nreve supply from the glossopharyngeal nerve, and their function is to elevate the larynx and the pharynx.

The palatopharyngeus muscles stem from the palatine aponeurosis and pterygoid processes and inserts into the thyroid cartilage. They are part of the soft palate, are innervated by the pharyngeal branch, and their action is to elevate the larynx and pharynx. blark

The relationship that exists between the recurrent laryngeal nerve and the inferior thyroid artery has also generated much scrutiny; usually, the nerve ascends posterior to the artery (about 60%), but occasionally it may ascend anterior (around 32.5%), or even between the branches of the artery (approximately 6.5%).

The position of the recurrent nerve is very important due to the risk of surgical injury.[2][3][4]

Cricothyrotomy is probably the most extensively used medical technique involving a small incision in the cricothyroid membrane to establish an airway in life-threatening situations. Nevertheless, the most critical surgical consideration of the laryngeal surgery is the iatrogenic injury to the recurrent laryngeal nerve in thyroid surgery. Usually, before and following thyroid surgery recurrent laryngeal nerve integrity is confirmed by an indirect laryngoscopy. Hence, surgeons rely heavily on intraoperative landmarks to identify and evade the recurrent laryngeal nerve. These landmarks include but are not restricted to, ligament of Berry, inferior thyroid artery and tubercle of Zuckerkandl, among others.[5]

Most acute cases of laryngitis occur as part of a viral upper respiratory tract infection although in some cases it may be due to bacterial infection. Fungal laryngitis is usually underdiagnosed and may account for up to 10% of cases. Excessive use of the vocal folds (e.g., singers, teachers, and other professions) can cause laryngitis/laryngeal trauma.

Most common causes of chronic laryngitis are smoking, allergies and reflux.

Congenital VFP may result from an array of diseases such as hydrocephalus, Goldenhar syndrome, and anatomical abnormalities such as tracheoesophageal fistula producing VFP. Though infection is a rare cause of VFP, it is usually owing to viral infection. Trauma, including iatrogenic damage to the nerve, is a common cause of VFP. Thyroid, lung or esophagus tumors can also produce VFP. Additionally, several systemic neurologic diseases such as multiple sclerosis or myasthenia gravis can produce VFP.

Usually, laryngeal cancer is a squamous cell carcinoma and originates in the glottis. Signs and symptoms include hoarseness or any voice change (including VFP), lump in the neck, cough, stridor or difficulty swallowing.[8] 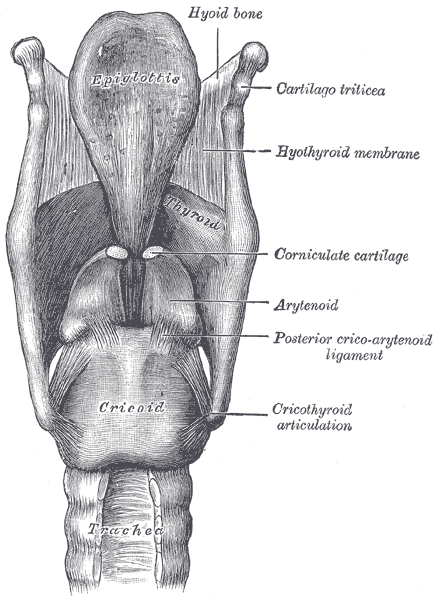