Kupffer cells (also known as stellate sinusoidal macrophages or Kupffer-Browicz cells) are macrophages found in the sinusoids of the liver. In fact, Kupffer cells make up 80% to 90% of all the macrophages in the entire human body. They are a component of the host immune system and are involved in the metabolism of various compounds. Once thought to be related to the endothelial cells, it is now known that the Kupffer cells descend from their own lineage of macrophages, derived from the yolk sac rather than from hematopoietic stem cells.

Differentiation of Kupffer cells are regulated by macrophage colony-stimulating factors (M-CSFs) found in the serum and liver, as well as granulocyte-macrophage colony-stimulating factors (GM-CSFs). Kupffer cells can be found in both centrilobular and periportal regions of the liver, but they are typically more concentrated in the periportal regions of the liver. However, the cells in the two regions can differ in certain enzymes, receptors, and subcellular structures.[1][2][3][4][1]

Kupffer cells are specialized macrophages found in the hepatic sinusoid, along with sinusoidal endothelial cells, Ito cells, and pit cells. Kupffer cells are amoeboid-shaped and are attached to the sinusoidal endothelial cells. Their surface contains microvilli, pseudopodia, and lamellipodia, which can project out in all directions. The microvilli and pseudopodia are involved in endocytosis of particles. They also contain Golgi apparatus, ribosomes, centrioles, microfilaments, and microtubules in their cytoplasm. The nucleus is ovoid or indented and can be lobulated. They also contain rough endoplasmic reticulum, nuclear envelope, and annulate lamellae, which all contain peroxidase activity.[5][6][7][8]

The phagocytic ability of the Kupffer cells is vast; they can engulf pathogens, immune complexes, liposomes, lipid microspheres, tumor cells, endotoxins, and various other particles. Kupffer cells are also known to be heterogeneous in function based on their location. In zone 1 of the liver lobules, they have higher activity overall compared to their counterpart in zone 3. The difference in activity is most likely due to the increased exposure to hazardous substances in zone 1 compared to zone 3. In addition to phagocytosis, Kupffer cells can produce inflammatory cytokines, oxygen radicals, TNF-alpha, and proteases; the production of these mediators is thought to contribute to the development of liver injury.

Kupffer cells stain positive for macrophage markers, including ED1, E2, and Ki-M2R in rats and F4/80 in mice. Their lysosomes stain positively for acid phosphatase. Kupffer cells can phagocytize other tracer substances, such as carbon, India ink, or latex microspheres, which are useful in their identification.

Kupffer cells have a wide range of variability in cell size and shape and have elongated cytoplasmic processes. They are found along the sinusoid on top of the endothelium. They can be seen in contact with various cells, such as endothelial cells fat-storing cells, collagen fibers, and other Kupffer cells.

On electron microscopy, Kupffer cells can be seen adjacent to the sinusoid, but not directly attached to the basement membrane. The microvilli from the parenchymal cells and the pseudopods of the Kupffer cells are intertwined.

Kupffer cells are involved in the pathogenesis of liver injury in response to sepsis. The liver macrophages are activated and release IL-1 and TNF-alpha, which activate leukocytes and sinusoidal endothelial cells to express ICAM-1. The result is tissue damage to the endothelium due to oxygen radicals, proteases, prostanoids, and other substances from leukocytes.

Kupffer cells contain the SR-AI/II scavenger receptor, which is involved in the recognition and binding of the lipid A domain of lipopolysaccharide (LPS) and lipoteichoic acid. Lipopolysaccharide (LPS) is a bacterial endotoxin found in the cell wall of gram-negative bacteria, while lipoteichoic acid is found in gram-positive bacteria. Studies have found that mice lacking SR-AI/II receptors are more susceptible to endotoxin shock from bacteria, suggesting the importance of Kupffer cells in the removal of the bacterial toxins from the system.

Kupffer cells have been identified to play a key role in the development of alcohol-induced liver disease. The intestinal tract of the human contains numerous bacteria, which can lead to the production of gut-derived endotoxin. The gut-derived endotoxins make their way to the liver, which is then cleared by the Kupffer cells. Studies suggest that these endotoxins activate Kupffer cells. Several mechanisms have been suggested regarding the connection between endotoxin levels and alcoholic consumption. One example is that chronic alcohol use prevents Kupffer cells from effectively removing endotoxins from the blood, leading to increased levels in circulation. Another mechanism states that alcohol consumption can lead to increased intestinal absorption of endotoxins through increased gut permeability. The endotoxin interacts with both Toll-like receptor 4 (TLR4) and CD14 receptors on Kupffer cells, signaling for the internalization of the lipopolysaccharide (LPS) endotoxin. Kupffer activation results in the production of reactive oxygen species (ROS), such as superoxide, leading to oxidative stress in the liver. TLR4 activates interleukin-1 receptor-associated kinase (IRAK-1), which leads to the activation of nuclear factor kappa B (NF-kB). The activation leads to numerous responses, which includes the generation of superoxide and production of cytokines; the end-result is liver damage and eventually loss of liver function. Kupffer cell activation has also been implicated in the development of binge drinking- induced fatty liver disease. The process is mediated by TNF-alpha activation of lipolysis. Kupffer cells can activate inflammasomes, which trigger the activation of caspase-1 and the production of IL-1beta, a pro-inflammatory mediator in alcoholic liver disease. Potential treatments for alcoholic liver disease are aimed at Kupffer cells’ role in the pathogenesis of the disease. Treatments for suppressing Kupffer cell activation and elimination of Kupffer cell cytotoxic products include antibiotics, probiotics, TNF-alpha inhibitors, and IL-1beta inhibitors.[9]

Kupffer cells have Fc, C3, and scavenger receptors that are involved in the phagocytosis of opsonized and nonopsonized materials. Scavenger receptors are also involved in the deposition of cholesterol in arterial walls, leading to atherogenesis. Also, Kupffer cells remove aged erythrocytes from circulation, resulting in elevated levels of heme oxygenase shortly after phagocytosis. Heme oxygenase is part of the metabolism and production of bilirubin; the enzyme degrades heme molecules found in erythrocytes. 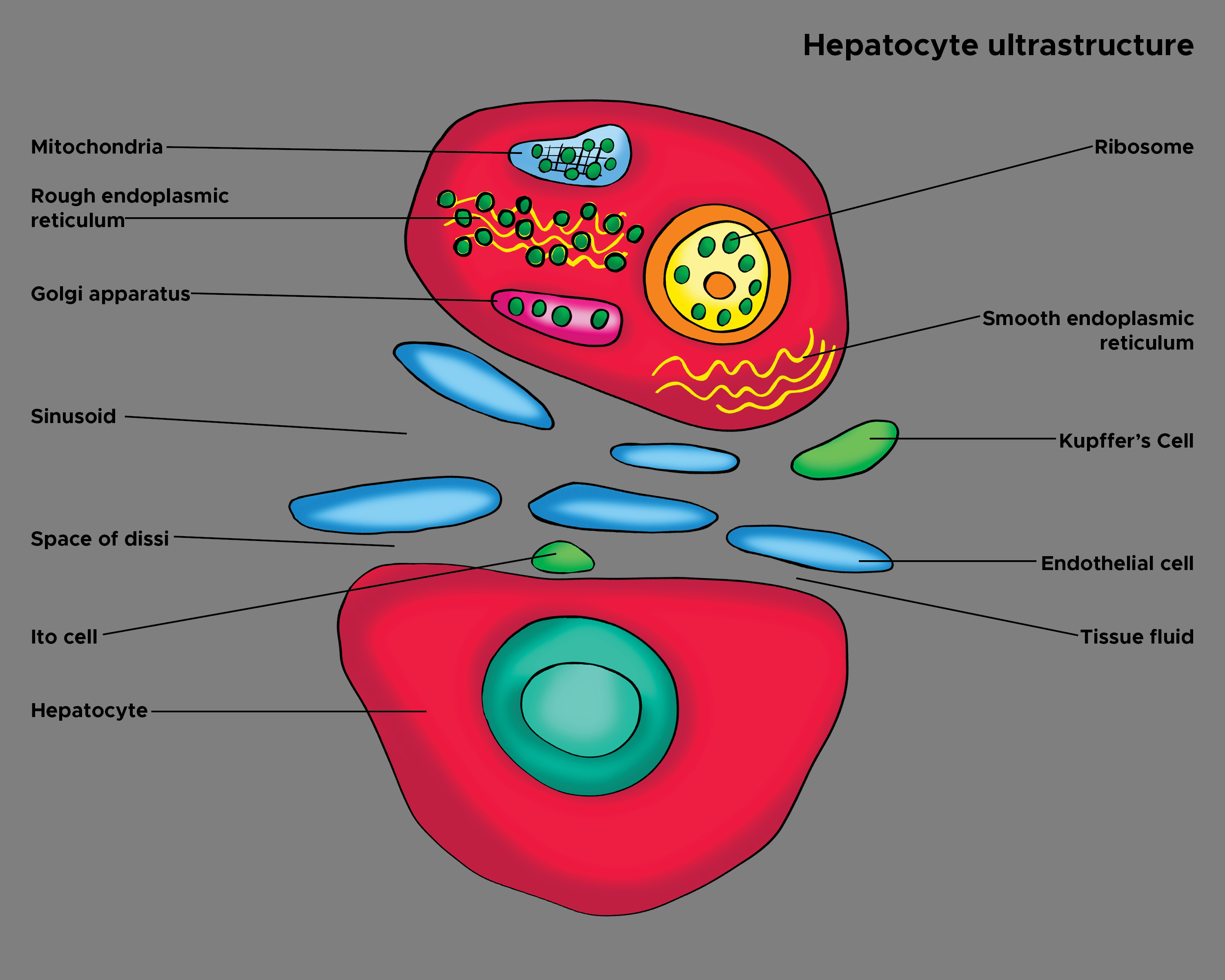