The iris is a circular, pigmented diaphragm that lies anterior to the lens in a coronal plane. It is attached peripherally to the ciliary body, with its unbound central border forming an aperture known as the pupil. The iris divides the space between the cornea and the lens into two chambers: anterior and posterior. The anterior chamber is bound by the cornea and iris. The anterior chamber communicates through the pupil with the posterior chamber, which is bound by the iris, ciliary processes, zonules, and lens. A fluid substance known as aqueous humor fills both chambers.

The iris, via the sphincter pupillae, is a part of the accommodative reflex. The accommodative reflex of the eye is an involuntary response when the visual focus switches from an object at a distance to one that is closer. The reflex is controlled by the parasympathetic nervous system and involves three actions - alteration of pupil aperture, lens shape, and convergence. The sphincter pupillae causes narrowing of the pupil in order to prevent diverging light rays from the corneal periphery creating a blurred image.

The vertebrate eye is made up of tissue from various embryonic origins. The lens and the cornea originate from the surface ectoderm. The retina and the epithelial layers of the iris and ciliary body originate from the anterior neural plate.[1] Within the stroma of the iris, the sphincter pupillae and dilator pupillae muscles develop from optic cup neuroectoderm, along with the iris epithelium.  In contrast, the ciliary muscle, which is responsible for changing the shape of the lens, is derived from overlying mesenchyme. The optic cup is neuroectodermal in origin and gives rise to the neuronal retina, the retinal pigmented epithelium, the epithelial layers of the ciliary body and iris, and the iris musculature.[2]

Ocular blood flow is controlled both via direct autonomic influences on the vasculature of the optic nerve, choroid, ciliary body, iris, and indirect influences on retinal blood flow.[3] The iris is supplied by the anterior ciliary arteries, the long posterior ciliary arteries, and anastomotic connections from the anterior choroid. The majority of the venous drainage from the anterior segment of the eye drains into the choroid posteriorly and then into the vortex veins.

The iris sphincter muscle receives its parasympathetic innervation via the short ciliary nerves which lead to pupillary constriction (miosis) and accommodation.[3] The parasympathetic fibers that serve the sphincter muscle originate from the Edinger-Westphal nucleus of cranial nerve III. The signal synapses in the ciliary ganglia become terminated on muscarinic receptors of the muscle fibers.

There are two muscles of the iris and they both consist of smooth muscle. The sphincter muscle contracts the pupil in a circular motion while the dilator muscles enlarge the pupil by pulling the iris radially. An area called the iris collarette is the thickest portion of the iris where the sphincter muscle and dilator muscle overlap. While the collarette is typically flat, there are cases in which this structure can be rather prominent.[4]

Surgery to the iris sphincter is done for functional or cosmetics issues. In general, surgery is warranted if the patient is having photophobia or blurry vision that cannot be controlled with drops. Patients can use pilocarpine drops to decrease the size of their pupils if some function of the sphincter remains. Reading glasses may also be necessary if the patient cannot accommodate. If inflammation is present after a trauma, the patient should be treated with steroid drops until resolved and re-assessed for sphincter function.

Adie tonic pupil is a neuro-ophthalmological disorder distinguished by a lack of response to light and a pupil that is tonically dilated but is able to respond to accommodation.[8] It is usually a benign entity. A variety of causes (usually infectious) lead to Adie tonic pupil and result from damage to postganglionic fibers of the parasympathetic innervation to the eye which results in an inability to constrict the iris sphincter muscle. It is more common in women and manifests unilaterally in 80% of cases.[9] Adie’s tonic pupil has been reported in the literature to be associated with a number of associated syndromes, including Adie syndrome, which involves diminished deep tendon reflexes.

Iridoplegia is the paralysis of the sphincter muscle of the iris. Many times, it is a result of direct trauma to the orbit but can also result from inflammation or even from eyedrops. There are three types of iridoplegia:

An iris coloboma is a hole in the iris usually due to incomplete closure of the fetal fissure during organogenesis. Colobomas can range from a simple hole in the iris to more severe involvement of the posterior pole, coloboma of the optic nerve of the choroid of the retina.[10] Colobomas also have a clinical association with CHARGE syndrome, which is a rare heritable disease caused by a mutation in the CHD7 gene that regulates chromatin remodeling.[11][12]

Traumatic mydriasis is usually the result of blunt injury to the eye and can present with iris sphincter tears that alter the shape of the pupil in the affected eye. Treatment initially involves cycloplegia to prevent posterior synechiae in patients with iritis. Patients are then observed clinically for the return of function. If the function does not return, and the patients are symptomatic, surgical intervention can be considered. Ocular trauma can also cause pupillary miosis though this is less common than mydriasis and tends to be related to anterior chamber inflammation. 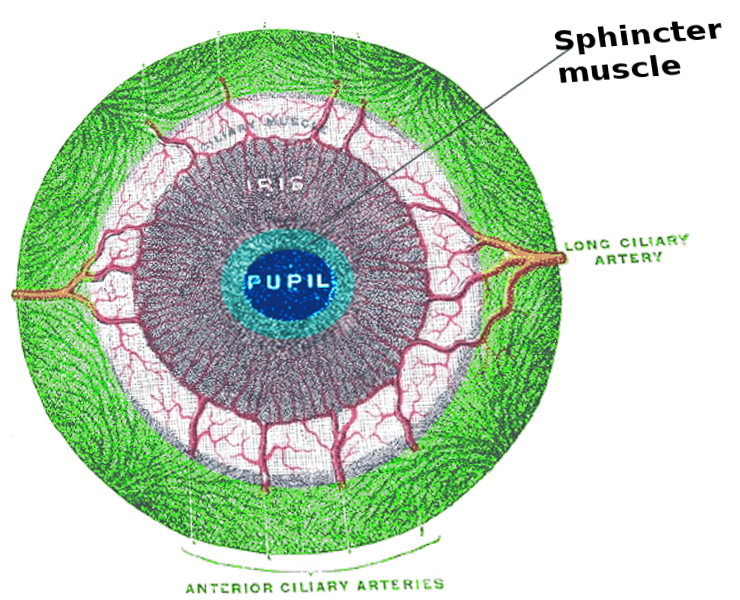