Subdural hemorrhage occurs when blood enters the subdural space which is anatomically the arachnoid space. Commonly subdural hemorrhage occurs after a vessel traversing between the brain and skull is stretched, broken, or torn and begins to bleed into the subdural space. These most commonly occur after a blunt head injury but may also occur after penetrating head injuries or spontaneously.[5][6]

Intraparenchymal hemorrhage is bleeding into the brain parenchyma proper. There is a wide variety of reasons due to which hemorrhage can occur including, but not limited to, hypertension, arteriovenous malformation, amyloid angiopathy, aneurysm rupture, tumor, coagulopathy, infection, vasculitis, and trauma.

Subarachnoid hemorrhage accounts for approximately 5% of all strokes and has an incidence of approximately two to 25 per 100,000 person-years for those over the age of 35. The incidence trends up slowly as patients age and may be very slightly more frequent in females than males (1.15:1 for the female to male ratio).

Epidural hematomas occur when blood dissects into the potential space between the dura and inner table of the skull. Most commonly this occurs after a skull fracture (85% to 95% of cases). There can be damage to an arterial or venous vessel which allows blood to dissect into the potential epidural space resulting in the epidural hematoma. The most common vessel damaged it the middle meningeal artery underlying the temporoparietal region of the skull.

Subdural hematoma has multiple causes including head trauma, coagulopathy, vascular abnormality rupture, and spontaneous. Most commonly head trauma causes motion of the brain relative to the skull which can stretch and break blood vessels traversing from the brain to the skull. If the blood vessels are damaged, they bleed into the subdural space.

Non-traumatic intraparenchymal hemorrhage most often occurs secondary to hypertensive damage to cerebral blood vessels which eventually burst and bleed into the brain. Other causes include rupture of an arteriovenous malformation, rupture of an aneurysm, arteriopathy, tumor, infection, or venous outflow obstruction. Penetrating and non-penetrating trauma may also cause intraparenchymal hemorrhage.

Patients with epidural hematoma report a history of a focal head injury such as blunt trauma from a hammer or baseball bat, fall, or motor vehicle collision. The classic presentation of an epidural hematoma is a loss of consciousness after the injury, followed by a lucid interval then neurologic deterioration. This classic presentation only occurs in less than 20% of patients. Other symptoms that are common include severe headache, nausea, vomiting, lethargy, and seizure.

A history of either major or minor head injury can often be found in cases of subdural hematoma. In older patients, a subdural hematoma can occur after trivial head injuries including bumping of the head on a cabinet or running into a door or wall. An acute subdural can present with recent trauma, headache, nausea, vomiting, altered mental status, seizure, and/or lethargy. A chronic subdural hematoma can present with a headache, nausea, vomiting, confusion, decreased consciousness, lethargy, motor deficits, aphasia, seizure, or personality changes. A physical exam may demonstrate a focal motor deficit, neurologic deficits, lethargy, or altered consciousness.

Initial evaluation includes airway, breathing, and circulation as patients can rapidly deteriorate and require intubation. A detailed neurologic examination helps identify neurologic deficits. With increasing intracranial pressure there may be a Cushing response (hypertension, bradycardia, and bradypnea). Emergent CT head without contrast is the imaging choice of the test due to its high sensitivity and specificity for identifying significant epidural hematomas. Historically cerebral angiography could identify the shift in cerebral blood vessels, but cerebral angiography has been supplanted by CT imaging.

After ensuring the medical stability of the patient, a detailed neurologic exam can help identify any specific neurologic deficits. Most commonly a computed tomography (CT) scan of the head without contrast is the first imaging test of choice. An acute subdural hematoma is typically hyperdense with chronic subdural being hypodense. A subacute subdural may be isodense to the brain and more difficult to identify.

Treatment begins with advanced trauma life support (ATLS) including airway control, ensuring adequate ventilation and circulation. Intravenous (IV) access should be secured. If the patient has a Glasgow Coma Score (GCS) of 8 or less or worsening neurologic status, intubation should be performed. Immediate neurosurgical consultation should be obtained for patients with epidural hematomas as they may expand over time due to continued bleeding. Definitive treatment is an evacuation of the hematoma and stopping the bleeding source. Some smaller epidural hematomas may be managed non-surgically and watched closely for resolution.

Non-surgical management options include repeat imaging to ensure subdural stability, the reversal of anticoagulation, platelet transfusions for thrombocytopenia or dysfunctional platelets, observation with frequent neurologic assessments for deterioration, and/or controlling hypertension. There is controversy about whether steroids can help stabilize the size of the subdural hematoma while giving it time to resorb or until surgical treatment.

In non-traumatic subarachnoid hemorrhage, the etiology of the hemorrhage must be ascertained and addressed. Early consultation with neurosurgery should be considered. Treatment varies depending on the etiology of the hemorrhage but can include treatment of an aneurysm or arteriovenous malformation or other etiology. Additionally, there should be a low threshold for placement of an external ventricular drain (EVD) due to the risk of hydrocephalus.

The differential diagnoses of intracranial hemorrhage include:

The prognosis depends on several factors including:

The main complications include:

The patients, once they recover, should be educated on the importance of rehabiltation treatment and drug intake as prescribed. They cannot drive unless told so.

Patients who present with CNS bleeding are best managed by an interprofessional team that includes a neurologist, neurosurgeon, radiologist, intensivist, neurosurgery nurses, physical therapist, pulmonologist, and other allied health specialists like speech, occupational and physical therapists. Many of these patients need admission to the ICU and the care depends on the degree of physical and other neurological deficits. The outcomes depend on the type and extent of bleed, age, other comorbidities, and severity of neurological deficit at the time of admission.[14][7][15] 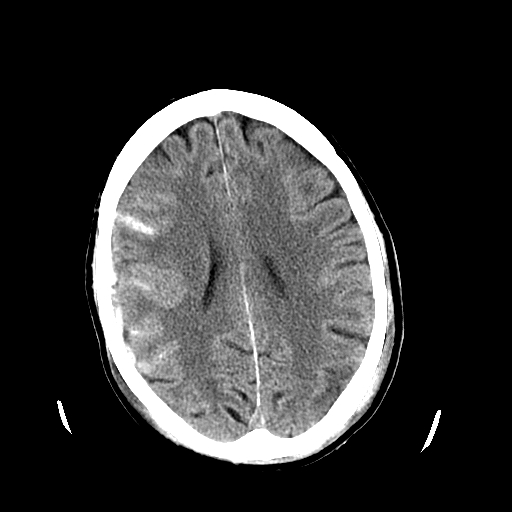 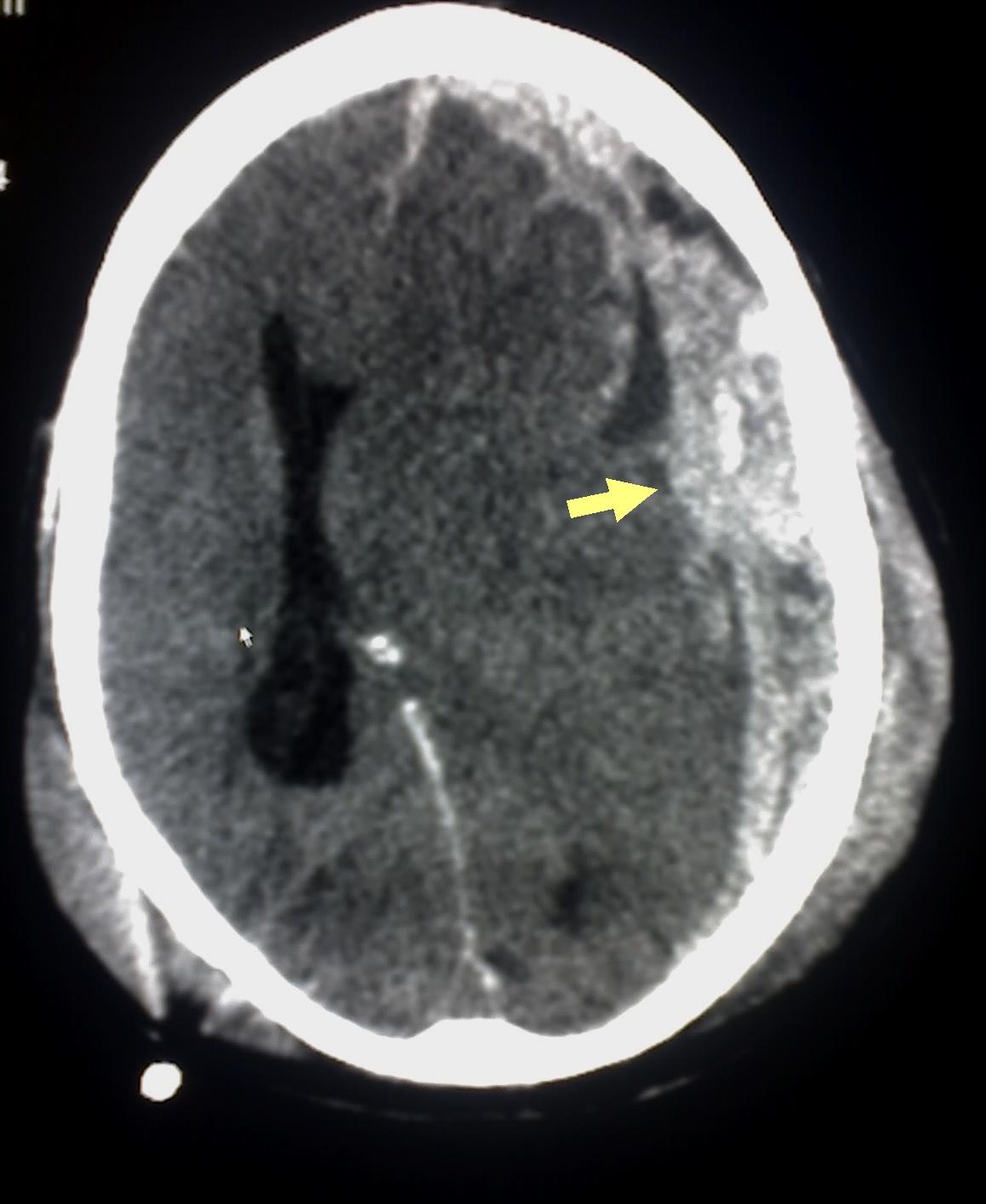 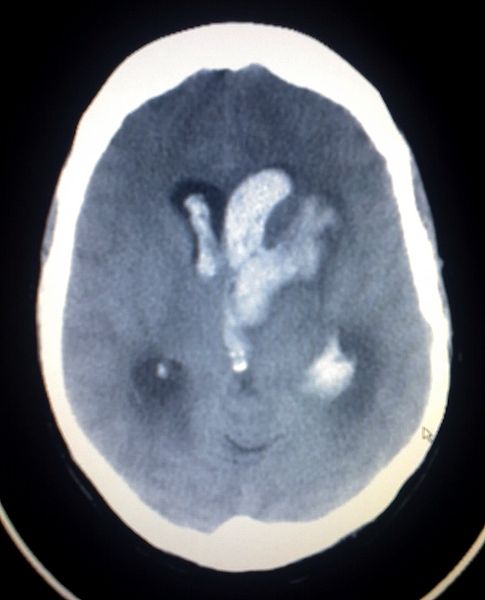