Hydroa vacciniforme is a very rare photosensitivity disorder of childhood that is characterized by pruritic or painful vesicles in photo-distributed areas. These lesions usually follow sunlight exposure and notably heal with permanent varioliform-type scarring.[1][2][3] Hydroa vacciniforme was originally described as a benign disorder in western countries due to the absence of systemic symptoms and spontaneous regression of disease in adolescence or young adulthood.[1] However, a more severe and disfiguring form has appeared in children from Latin America and Asia, with the name hydroa vacciniforme-like lymphoma. Hydroa vacciniforme-like lymphoma has been linked to Epstein-Barr virus (EBV) infection and is currently recognized by the World Health Organization classification of lymphomas as a subgroup of EBV+ T-cell lymphoproliferative disorders of childhood.[1][2][3]

Although ultraviolet radiation is generally necessary for the provocation of hydroa vacciniforme, the exact causative agent is unknown. Sunlight clearly plays a role in the pathogenesis based on the induction of disease-specific lesions after photo-testing with repeated monochromatic or broad-spectrum ultraviolet radiation.[2] However, multiple studies have found an association between EBV and hydroa vacciniforme and hydroa vacciniforme-like lymphoma, suggesting sunlight exposure may not be the sole causative factor. Additionally, hydroa vacciniforme-like lymphoma lesions can occur on sun-protected sites and are not clearly induced or exacerbated by sun exposure, further supporting a multifactorial etiology.[3] Other authors have suggested EBV infection is a consequence rather than a cause of hydroa vacciniforme due to the higher positivity of EBV-encoded small RNAs with disease progression. Thus, etiologic research studying populations in areas of endemic EBV may be subject to misinterpretation due to confounding variables.[3][4]

Hydroa vacciniforme is considered a childhood disease with a bimodal incidence of early childhood (1 to 7 years old) and around or after puberty (12 to 16 years old). Onset is typically seasonal, in the spring or summer months.[5] There have been infrequent cases reported in infancy and adulthood.[6][7] There is also a slight predilection for males and lighter skin tones,[5] although, there are contradictory studies regarding sex distribution.[2] People with darker skin tones are more likely to present with hydroa vacciniforme-like lymphoma.[1] Familial cases are extremely rare, with only three reported cases in the literature.[5][8]

The exact pathogenesis of hydroa vacciniforme remains unclear. Some studies suggest sensitivity to ultraviolet B (UVB) is the etiologic agent,[9] while other studies point to longer wavelengths in the ultraviolet A (UVA) spectrum as the more likely cause.[5][6] The chromophore leading to UV-induced damage in hydroa vacciniforme is unclear. In-vitro studies with lymphocytes and fibroblasts have implicated a reduced DNA repair defect. Other studies have pointed to photoproducts causing tissue damage either directly or via DNA.[5][10][11]

In contrast, the differences in clinical severity and incidence between patient populations in hydroa vacciniforme-like lymphoma allude to a combination of genetic, immunologic, and/or environmental events. This model suggests a patient with a particular genetic background is predisposed to develop chronic EBV-infection after the initial infection. Subsequently, in response to inflammatory stimuli, EBV-infected cytotoxic T cells and/or NK cells are recruited locally and cause tissue damage. Also, small studies have shown an upregulation of interferon-y and multiple genes that encode chemokines, including CXCL9, CXCL10, CXCL11, and CCL4 in serum levels of patients. This data suggests the role of chemokines and potentially gene polymorphisms in disease severity.[1]

Hydroa vacciniforme lesions typically begin as symmetrical, pruritic, or burning erythematous, clustered macules on photo distributed areas such as the face and dorsum of the hands. These lesions typically occur within hours of sunlight exposure. After several hours, the macules become tender papules or plaques surrounded by vesicles or hemorrhagic bullae. Finally, after several days, the lesions become umbilicated and secondarily crusted. These hemorrhagic crusted lesions heal over several weeks as varioliform scars.[1][2][3][5][14] Uncommon presentations include ocular involvement, deformities of the ear and nose, or contractures of the fingers.[5]

Patients with hydroa vacciniforme have significant psychosocial and emotional morbidity. According to studies, the most perceived impairment is the restriction on daily activities and life adjustments needed to minimize their disease. Furthermore, disfigurement from permanent scarring significantly impacts patients' lives.[2]

The clinical course of hydroa vacciniforme-like lymphoma is aggressive with high mortality, especially when extracutaneous involvement occurs. In one study, 8 out of 12 patients died from complications of their disease an average of 5.3 months after initial diagnosis.[3]

It is essential for patients to receive education on strict sun avoidance during midday hours and proper sun protection. Sun protection should cover broad-spectrum (UVA and UVB). It is also essential to educate patients that windows do not filter UVA light and sun avoidance precautions are still necessary when indoors.

Hydroa vacciniforme is a very rare disorder with no cure. The most significant risk is its transformation into a lymphoma. Also, due to the considerable psychosocial and emotional morbidity caused by hydroa vacciniforme, it is imperative to take an interprofessional approach in the management of these patients.

It is crucial to consider coordination with a psychologist, mental health nurse, or psychiatrist because this disease occurs during the formative years of childhood development and significantly affects facial aesthetics.

All clinicians, including nurses and pharmacists, should educate the patient on avoiding hot temperatures and the sun. When going out, the patient should wear long-sleeved garments, a wide brim hat, and sunglasses. Patients should be told to avoid alternative care remedies since there is a risk of aggravating the skin condition. Pharmacists can coordinate with the physician and nursing staff to recommend optimal sun-screening products. Nurses must be aware of watching for signs of malignant transformation, in the rare event that it happens, and communicate to the managing clinician immediately. This type of interprofessional team approach is crucial to optimizing outcomes. [Level 5]

All patients need lifelong monitoring; for those that exhibit signs of hydroa vacciniforme-like lymphoma, early detection is paramount and prompt referral with a hematologist/oncologist may be beneficial to survival.[2][3] [Level V] 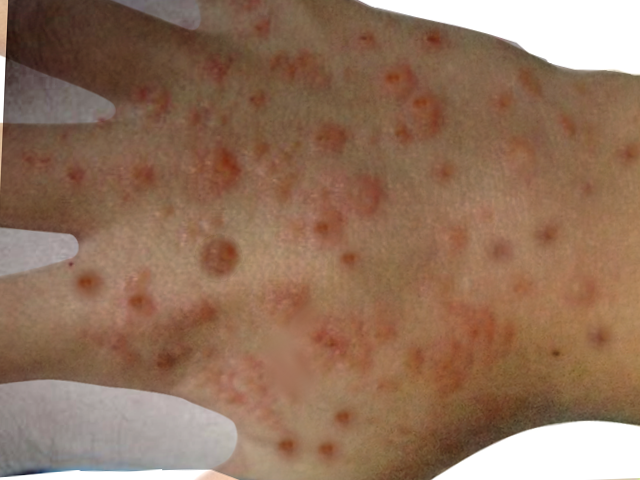