Echinococcosis (Echinococcus granulosis) is a zoonotic larval infection that infects humans globally. Patients with this condition may be asymptomatic for years and only present symptoms when the liver cysts (hydatid cysts) rupture. This activity illustrates the evaluation and management of echinococcosis and reviews the role of the interprofessional team in improving care for patients with this condition.

Echinococcosis is a zoonotic larval infection that infects humans globally. The parasite Echinococcus causes the disease. According to the World Health Organization (WHO), the global burden of controlling the disease exceeds three billion US dollars annually.[1]

There are several identified species of Echinococcosis, four of which are of concern in humans:

This article will discuss and summarize the essential aspects of Echinococcus granulosus infections.

Hydatidosis results from a larval infection of the tapeworm (cestode) Echinococcus granulosus. The disease characteristically demonstrates the growth of hydatid cysts (metacestode) in internal organs of intermediate hosts, including humans. The definitive hosts of the cestode are carnivores such as dogs. Humans and other hosts ingest eggs or gravid proglottids that are excreted in the definitive host's feces, causing the infection.[2]

Due to the nature of the pathogen, hydatidosis is more predominant in communities that keep dogs for guarding and herding cattle [3]. Geographically, the disease has a worldwide distribution with higher prevalence in the Mediterranean, Russia, China, North and East Africa, Australia, and South America[2].

As humans ingest the eggs of the tapeworm, an oncosphere larva releases from the egg, which can penetrate the lamina propria of the intestine. Once it penetrates, it gets passively transported via blood or lymphatics to the liver, lungs, or other internal organs where they develop into hydatid cysts (metacestode larvae). These cysts have an inner germinal layer and an outer laminated layer surrounded by a fibrous capsule derived from the host. Smaller "daughter" cysts bud from the inner cellular layer. In humans, cysts grow slowly and can be up to multiple liters in volume and contain thousands of protoscolices. Over time, septations and daughter cysts disrupt the typical unilocular pattern of echinococcal cysts.[2][4]

Under the microscope, the hydatid cysts are recognizable by three distinct characteristics[5]:

A host produced granulomatous reaction can be seen surrounding the cyst

Infected hosts may go on for months or years without showing any signs or symptoms of infection; some patients have persistent cysts for years without noticing, others cysts may rupture spontaneously or due to trauma and disappear entirely.

If a cyst continues growing, patients may exhibit symptoms gradually due to the cyst exerting pressure on surrounding tissue. Sudden signs and symptoms are more likely due to rupture rather than the growth of the cyst.

Rupture of the cyst can induce an IgE mediated hypersensitivity reaction in patients, presenting as hives, mucous membrane swelling, and flushing. The reaction can be life-threatening.[6]

Ruptured or leaking cysts can release protoscolices into the peritoneum causing secondary hydatidosis.[7]

The nature of signs and symptoms varies depending on the site of the cyst, which is most common in the liver (greater than 65% in pastoral strains) and lungs (25%) but can affect other sites including bones, spleen, central nervous system, and the heart. Most primary infections consist of one cyst, but 20 to 40% of patients display multiple organ involvement.[8]

While infections can be acquired in childhood, most causes of hydatidosis present later in life due to the slow growing nature of cysts. However, cysts in the brain or eye can cause symptoms early on and thus mostly present in childhood.

During the history, it's important to look for risk factors of echinococcosis, especially contact with canines and cattle.

Diagnosis of echinococcosis starts from a thorough history, including a history of exposure or immigration from endemic areas, followed by a combination of serology and imaging.

Liver function tests are unreliable in detecting the severity of disease and are abnormal in only about 40% of patients. Alkaline phosphatase is the one typically elevated, while AST, ALT, and bilirubin levels typically remain within normal range. The complete blood count may show eosinophilia.[7]

Serological testing for Echinoccocus antibodies is a common method for diagnosis. ELISA tests are usually used to screen. A confirmatory immunoblot assay for echinococcal antigens is carried out following a positive result. However, a significant number of echinococcosis patients do not elicit an immune response.[9] Strength and detectability of the immune response depend on various factors including cyst viability and cyst wall intactness.

Imaging is extremely useful in detecting and monitoring hydatidosis cases, especially those that are seronegative. Ultrasonography is the preferred modality for liver and intraabdominal hydatidosis, but its accuracy remains operator dependent. It remains the modality of choice for screening due to its accessibility and portability. It's also helpful in post-treatment monitoring of the disease.

Radiography can be used to detect calcifications in up to 30% of cases. The calcifications are typically ring-like and can progress throughout all stages of the disease.[11]

CT imaging is highly sensitive and serves a vital role in cases where ultrasonography is difficult (e.g., obese patients). It's also crucial in the perioperative period, as it's excellent at detecting complications including cyst rupture, underlying infection, and biliary or vascular involvement.[12]

Other modalities used for diagnosis include ultrasound-guided fine needle aspiration (in seronegative cases with inconclusive imaging) and endoscopic retrograde cholangiopancreatography (both diagnostic and therapeutic for cases affecting the biliary tree).[13]

Management options range from expectant therapy to invasive surgical intervention; the choice depends on a variety of factors including the patient's clinical picture and the size of the cyst (ultrasound-guided staging system is the method used in liver cysts).

Treatment of Hepatic Cysts[13]: (Strength of recommendations B, quality of evidence III)

Post-treatment monitoring using leukocyte count, aminotransferases, and ultrasound should be done every 3 to 6 months initially then once yearly once the patient is stable.[13]

Hydatidosis can mimic a large number of conditions, depending on the site of the cyst.

A detailed history and physical exam, alongside proper workup including serology and imaging, is key in making the diagnosis and ruling out diseases that may mimic hydatidosis.

Prognosis is considered generally good with appropriate treatment. However, cysts that develop in difficult sites for surgery such as the heart and spine have a poorer prognosis. Recurrence at the site of the cyst or in other sites occurs in some cases.[14][15][16][17]

Education regarding the disease and its mode of transmission is especially crucial in endemic areas. People who work with cattle and dogs should receive education on the transmissibility of the disease and proper ways of dealing with sheep viscera.

Mass screening using ultrasound has been used to monitor prevalence in endemic areas, which helps guide a public health discussion on ways to limit the disease in these areas.[18]

The diagnosis of hydatidosis can pose some difficulty to the nurse practitioner, internist or primary physician, especially in areas where the disease is not endemic. However, being mindful of the possibility alongside picking up clues from the history should help in guiding the workup and eventually the diagnosis.

Management options should be evaluated based on a patient to patient basis. Infectious disease specialists, surgeons, anesthetists, and potentially interventional radiologists could all weigh in on deciding what could lead to the best outcome for the patient. These physicians, as part of a broader interprofessional team approach, to include nurses and pharmacists can provide for the best potential result. This interprofessional discussion is emphasized in complicated cases or in atypical sites for hydatidosis where the literature is less informative on outcomes. [Level 5] 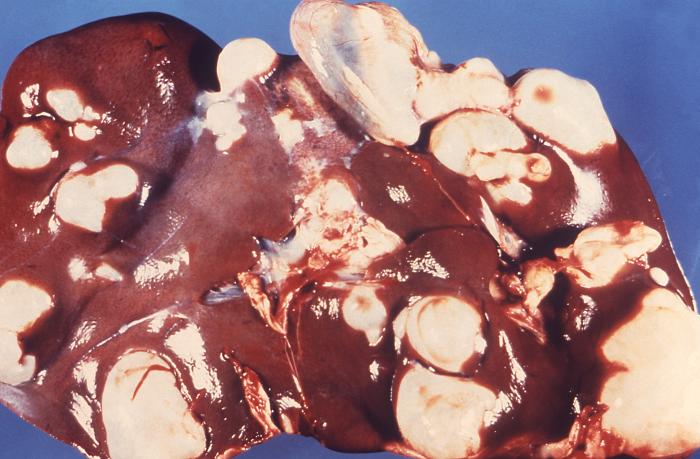 Dhar P,Chaudhary A,Desai R,Agarwal A,Sachdev A, Current trends in the diagnosis and management of cystic hydatid disease of the liver. The Journal of communicable diseases. 1996 Dec;     [PubMed PMID: 9057445]