Hodgkin lymphoma has unique neoplastic cells in both the classical and NLP-HL types. Reed-Sternberg (RS) cell is a neoplastic, large multinucleated cell with two mirror-image nuclei (owl eyes) within a reactive cellular background. The RS cell is pathognomonic for classical HL. RS cells are derived from germinal center B cells with mutations of the IgH-variable region segment. The RS secrete cytokines to recruit reactive cells that include IL-5 and transforming growth factor-beta (TGF-beta). The RS cell is usually aneuploid with no consistent cytogenetic abnormality. Clonal Ig gene rearrangements have been found in the majority of isolated RS cells. Immunohistochemistry stains for RS cells are positive for CD30, CD15, but typically negative for CD20 and CD45 that are positive only in neoplastic NLP-HL cells. In addition to CD15 and CD30, RS cells are usually positive for PAX5, CD25, HLA-DR, ICAM-1, Fascin, CD95 (apo-1/fas), TRAF1, CD40, and CD86. There are RS cell variants that include the Hodgkin cell, mummified cells, and lacunar cells. Hodgkin cells are mononuclear RS-cell variants.

On the other hand, NLP-HL lacks the typical RS cells but has lymphocytic and histiocytic cells, which are characterized by larger cells with folded multilobulated nuclei (also known as “popcorn cells” or LP cells). The LP cells show a nucleus with multiple nucleoli that are basophilic and smaller than those seen in RS cells. LP cells show clonally rearranged immunoglobulin genes that are only detected in isolated single LP cells. The LP cells are usually positive for C020, CD45, EMA, CD79a, CD75, BCL6, BOB.1, OCT2, and J chain.

Lymphocyte-rich HL commonly shows a nodular growth pattern in an inflammatory background that consists predominantly of lymphocytes, with rare or no eosinophils or neutrophils. RS cells and mononuclear Hodgkin cells are usually present. Lymphocyte depleted HL has a diffuse hypocellular growth pattern with increased areas of fibrosis, necrosis, and uncommon inflammatory cells. RS cells are usually present. NLPHL is characterized by overall nodular architecture with LP cells in a background of small B lymphocytes, follicular dendritic cells, and follicular T lymphocytes. In conclusion, morphology and immunophenotype of both the neoplastic cells and the background infiltrate are crucial in diagnosing HL and its different subtypes. In summary, correct morphological and immunophenotypic assessment in HL is important for the correct diagnosis of the disease entity.

Patients with Hodgkin lymphoma frequently present with painless supra-diaphragmatic lymphadenopathy (one to two lymph node areas), B symptoms including unexplained profound weight loss, high fevers, and drenching night sweats. B symptoms are evident in up to 30% of patients and are generally more common in stage 3 to 4 of the disease, mixed cellularity, and lymphocyte depleted HL subtypes. Pain in lymph nodes may occur with alcohol consumption (paraneoplastic symptom). Chronic pruritus is another disease symptom that may be encountered. If mediastinal nodes enlargement is significant, the mass effect can produce chest pain and shortness of breath. If the patient has an extra-nodal disease, which is less common, related clinical manifestations may occur.

Each subtype of Hodgkin lymphoma has distinct clinical features. Nodular sclerosis subtype affects young adults and presents with early disease stage, while mixed cellularity HL is prevalent in both children and elderly patients and commonly presents with advanced disease stage. Lymphocyte depletion HL presents with extensive extranodal disease, affects elderly patients, and is associated with AIDS infection. Lymphocyte-rich classical HL presents with localized painless peripheral lymphadenopathy similar to NLP-HL. NLP-HL is a distinct, unique clinicopathological entity that is distinct from classical HL. It presents in males with localized painless peripheral lymphadenopathy in the neck that often spares the mediastinum. NLP-HL shows a more indolent course with a tendency for late relapses.[7][8][9]

Definitive diagnosis for Hodgkin lymphoma is through biopsy from a lymph node or suspected organ. It is important to note that fine-needle aspiration or core-needle biopsy frequently show non-specific findings because of the low ratio of malignant cells and loss of architectural information. So excisional biopsy should be pursued if suspicion of Hodgkin lymphoma is high. An RS cell or LP cell need to be identified within the biopsy specimen to establish a definitive diagnosis. Further workup is essential to determine the stage, which guides treatment and provide prognostic information.

LDH levels correlate with the bulk of disease. Elevated levels of alkaline phosphatase may suggest liver or bone involvement. Testing for HIV is recommended as the treatment of the infection can improve outcomes in HIV positive individuals.

Chest x-ray, CT chest/abdomen/pelvis, and PET/CT scans can help with staging. PET-CT scanning has now become a standard test for assessment of treatment response in HL and most lymphomas. Overall, a comprehensive workup is essential for both diagnosis and staging of Hodgkin lymphoma.

Treatment of Hodgkin lymphoma largely depends on the histologic characteristics, the stage of the disease, and the presence or absence of prognostic factors. The goal of treatment for patients with Hodgkin lymphoma is to cure the disease with control of short and long-term complications. There are several different staging systems for Hodgkin lymphoma, and the Cotswolds modified Ann Arbor classification is commonly used. The International Prognostic Factors Project on Advanced Hodgkin's lymphoma identified 7 variables for patients with advanced disease:

Risk stratification categorizes patients as low risk or high risk for recurrence. The response to therapy is determined by PET scan and is used to optimize therapy. The initial treatment of Hodgkin lymphoma depends on subgroup treatment. There are three treatment subgroups: patients with the early-stage disease with favorable prognostic factors, patients with the limited-stage disease who have unfavorable prognostic factors, and those with advanced-stage disease. Patients who are in early-stage (stage I to IIA) with favorable prognostic features are treated with short duration of chemotherapy, typically two cycles of ABVD (doxorubicin, bleomycin, vinblastine, and dacarbazine) followed by restricted involved-field radiation therapy (IFRT).

Patients who are in limited-stage disease but with unfavorable features such as bulky mediastinal disease, elevated ESR, and extra-nodal extension are treated with a longer course of chemotherapy (4 to 6 cycles) followed by a higher dose of IFRT. Patients with advanced-stage (stage IIB to IV) are risk-stratified by a different scoring system, the International Prognostic Score (IPS). Depending on IPS, different chemotherapy regimens (for example, escalated BEACOPP and Stanford V) can be used, but the standard of care is ABVD for most patients.

Radiation, in general, is not beneficial in these patients. Despite the high cure rate with initial therapy, approximately 10% of patients with Hodgkin lymphoma are refractory to initial treatment, and up to 30% of patients will relapse after achieving an initial complete remission. High-dose chemotherapy, followed by an autologous stem cell transplant is the standard of care for the majority of patients who are refractory or relapse post-initial therapy. For patients who fail autologous transplantation treatment options include: brentuximab vedotin, PD-1 blockade, non-myeloablative allogeneic transplantation, or clinical trials. Future directions in the management of Hodgkin lymphoma will include the incorporation of frontline therapeutics that have shown efficacy in refractory/relapses disease setting as well as other possible novel therapeutics.[10][11][12][13]

Prognosis depends on several prognostic factors, including disease stage. Disease stage is currently only one factor in the prognostic indices used for pretreatment risk stratification and assessment. The 5-year overall survival (OS) in stage 1 or 2a is approximately 90%; on the other hand, stage 4 disease has a 5-year OS of approximately 60%.

Pulmonary disease can result from drugs like bleomycin and radiation therapy.

Secondary cancers are a common cause of morbidity and mortality. The most common secondary malignancy following treatment of patients with Hodgkin lymphoma is lung cancer.

Other cancers that may develop include breast, soft tissue sarcoma, pancreatic, and thyroid.

Infertility varies but occurs in over 50% of patients.

Infectious complications do occur but can be maned with empirical antibiotic treatment.

Hodgkin lymphoma is a systemic disorder that is best managed by an interprofessional team for best outcomes.

The management of Hodgkin lymphoma is primarily by the oncologists. However, the patient may first present to the primary care provider or nurse practitioner with symptoms suggestive of the lymphoma. The key is prompt referral so that therapy can be initiated.

Treatment of Hodgkin lymphoma largely depends on the histologic characteristics, the stage of the disease, and the presence or absence of prognostic factors. The goal of treatment for patients with Hodgkin lymphoma is to cure the disease with control of short and long-term complications.

Because many patients develop anxiety and depression, a mental health provider should provide appropriate counseling.

The dietitian should be involved in educating the patient on foods to eat and what to avoid.

The interprofessional team has to meet on a weekly basis to discuss patient care and future therapy. The communication between the members should be clear and open to ensure that the patient's treatment has not been jeopardized. Finally, if the patient is terminal, a hospice care team should be involved.

Prognosis depends on several prognostic factors, including disease stage. Disease stage is currently only one factor in the prognostic indices used for pretreatment risk stratification and assessment. The 5-year overall survival (OS) in stage 1 or 2a is approximately 90%; on the other hand, stage 4 disease has a 5-year OS of approximately 60%.[14][15](Level 5) 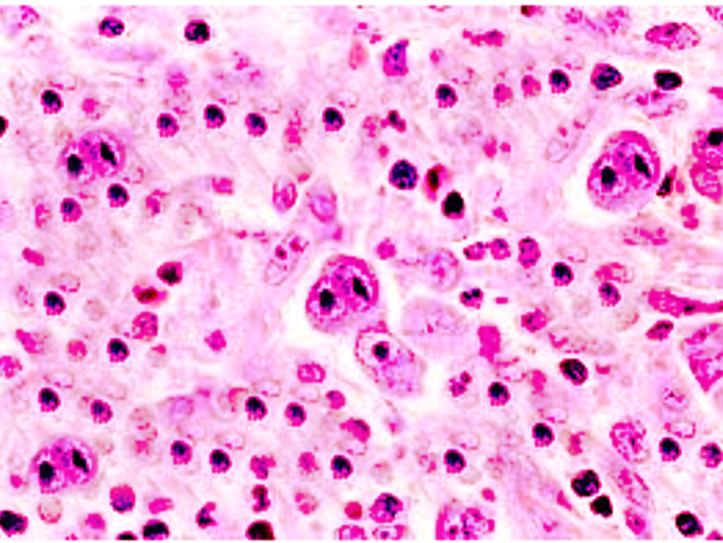