Hirsutism is the growth of excessive male-pattern hair in women after puberty. It affects facial and body areas dependent on androgens, namely mustache and beard, pubic hair, buttocks, and thighs. It is a frequent reason for dermatological consultation. This activity reviews the evaluation and management of hirsutism and highlights the role of the healthcare team in the recognition and management of this condition.

Hirsutism means the growth of excessive male-pattern hair in women after puberty. It affects facial and body areas dependent on androgens, namely mustache and beard, pubic hair, buttocks, and thighs. It is a frequent reason for dermatological consultation [1]. Hirsutism is the most common endocrine disorder affecting nearly 10% of women in the United States.

Irrespective of the cause, hirsutism can cause significant emotional stress and mental anguish. The key is to find the cause and address the cosmetic issue.

The causes of hirsutism are variable. The condition may be of ovarian or adrenal origin, tumoral or not. The following are some examples.

Hirsutism is most often due to hyperproduction of androgens, of ovarian or adrenal origin. Hyperandrogenism of tumor origin, which is very severe, must be distinguished from non-tumor hyperandrogenism, which is often minimal or moderate.

It represents the most common cause of hirsutism and causes about 75% of all cases. It affects 5% to 10% of women during their period of genital activity and 20% to 25% of adolescent girls. It is a heterogeneous and complex syndrome of unknown etiology characterized by the end of follicular maturation with an accumulation of small follicles under the cortex and hyperplasia of the ovarian stroma.

Hirsutism appears at puberty, accompanied by disturbances of the menstrual cycle, weight gain, dyslipidemia, insulin resistance, acne, and acanthosis nigricans. The patient reports spaniomenorrhea (prolongation of the cycle beyond 35 days), oligomenorrhea (less abundant menstruation), and infertility. The ovaries can be enlarged. Hypothyroidism or liver disease may be present.

Hyperandrogenism due to ovarian or adrenal tumors is rare. It is responsible for only 0.2% of all cases of hirsutism. These androgen-secreting tumors are autonomous, and therefore, do not depend on the hypothalamic-pituitary axis. Approximatively 50% of them are malignant, and in these cases, the plasma androgen levels are very high. They are also responsible for rapid-onset of virilization, hirsutism, and a pelvic or abdominal mass.

This is a common autosomal recessive disorder, caused by a partial 21-hydroxylase deficiency, and represents the most common adrenal etiology of hyperandrogenism. Its prevalence varies greatly according to the ethnicity of the patients. So it is more common in the Ashkenazi Jewish population (3.7%) and the Central European population (2%) and rare in Caucasians (0.1%). Like PCOS, NCAH can be expressed after the puberty by hirsutism, oligomenorrhea, acne, infertility, alopecia, and primary amenorrhoea.

It is important to know that hypertrichosis could also be caused by certain medications such as acetazolamide, phenytoin, latanoprost, streptomycin, psoralen, minoxidil, cyclosporine, and diazoxide.

The responsibility of the endocrinopathies in the occurrence of hirsutism is rare, and other more specific symptoms and signs dominate the clinical picture:

Moderate hirsutism can be observed in pregnant women (physiological prolactin secretion) and postmenopausal women (relative hyperandrogenism due to the cessation of ovarian estrogen production).

Idiopathic hirsutism defines the hirsutism that occurs in association with regular menses, normal ovarian morphology, and normal plasmatic androgen levels. It is a diagnosis of exclusion after elimination of other etiologies. It represents about 10% of all cases of hirsutism and 50% of cases of mild hirsutism. It may be due to hypersensitivity of the pilosebaceous follicle receptors to androgens and peripheral conversation induced by the 5-reductase of testosterone to dihydrotestosterone ten-fold more active on the follicle-sebaceous unit. This has genetic determinism and is frequently reported in women of East Indian and Mediterranean origin.

The exact prevalence of hirsutism is not well known. It may be 10% or even higher than 50%. The psychological problem that this disease causes depends on ethnic and socio-cultural factors. Indeed, in some societies where the lack of hair is considered an important criterion of female beauty, minimal hirsutism could be considered a severe disorder, while much more pronounced hirsutism could be accepted in other societies.[9]

Hirsutism appears to be most common in dark-skinned individuals.  Hirsutism can occur in men but is difficult to recognize. In children, hirsutism is a sign of precocious puberty.

Hirsutism is also known to occur in women who discontinue the oral contraceptive pill and gain weight.

Hirsutism is an androgen-dependent disorder resulting from the interaction between circulating androgen levels and the sensitivity of the hair follicle to androgens. The skin can retain testosterone in a more active androgen, dihydrotestosterone (DHT) through a 5alpha-reductase enzyme of which there are two isoenzymes, types 1 (chromosome 5) and 2 (chromosome 2), present in the skin and the hair follicle. In addition, the skin and the pilosebaceous follicle have an androgen receptor (AR).

After exclusion of an exogenous intake of androgens, hirsutism results either from hypersecretion of androgens, from the ovary or the adrenal gland, or the increased cutaneous sensitivity of the skin to normal circulating levels of androgens. This last case is "idiopathic hirsutism."[9][10]

The medical history is important. In the case of hirsutism of peripubertal and slow onset, it indicates primary hirsutism or non-tumoral secondary hirsutism. Late-onset or rapid progression, signs of virilization or high levels of hormones lead to adrenal (adenomas), ovarian (arrhenoblastoma), or pituitary (prolactinoma) tumors. Anamnesis of cycle disorders is an important indicator for secondary hirsutism (100% for tumors, 75% for polycystic ovaries, 0% to 25% for late adrenogenital syndrome).

The general characteristic is the sexual hair, whose density and properties change, especially in the middle areas of the body. Most often, the face, chest, areolas, white line, buttocks, sacrum, inner thighs, and external genitalia are affected. The severity of hirsutism can be quantified based on the Ferriman and Gallwey system, which evaluates nine areas of the body. For each, one assigns points from 1 to 4 are assigned according to the density of hair, ranging from the absence of hair to severe hirsutism. One can then calculate a total score; if it is greater than 7, the maximum being 36, it is considered abnormal. Other common symptoms associated with excess androgens are acne, menstrual irregularities, the temporal recession of the hairline and frontal alopecia.[9][10]

The diagnosis of idiopathic hirsutism is a diagnosis of exclusion. Approximately 15% to 50% of women suffering from hirsutism belong to this category. Its pathogenesis is then parallel to that of primary androgenetic alopecia.[9][10]

Treatment of non-tumoral hirsutism still includes oral contraception. It inhibits by its progestogen the hypothalamic-pituitary axis, and thus the ovarian production of androgens; by its estrogen, it increases the SHBG. It is combined with an antiandrogenic treatment: flutamide, spironolactone, cyproterone acetate, finasteride are all used with variable but comparable results.

Oral contraceptives are the first treatment of choice as they suppress androgen production by the ovaries. However, they often do not work. In addition, for a female who desires a pregnancy, this treatment may not be ideal.

Spironolactone is known to block androgen receptors and is the second most common treatment. It can even be combined with an oral contraceptive. However, the improvement is slow and takes many months. Thus, compliance with spironolactone is low.

Finasteride is used to treat hirsutism and is preferred as it does not have any estrogenic or progesterone activity. However, it is not recommended in women of childbearing age as there is a risk of ambiguous genitalia in the fetus. Flutamide is another novel treatment, and while it does work, the medication is expensive and has the potential to cause liver damage.

Adrenal hyperandrogenism is slowed down by low dose corticosteroids, possibly associated with the treatments as mentioned earlier.

Fine hair growth can be inhibited by twice, daily topical application of eflornithine. Electrolysis is less used now except for coarse white hairs and also in cases of polycystic ovaries without insulin resistance.

As the effect of drug treatment that occurs only after 1 to 2 years, clinicians use the cosmetic approaches that are also appropriate for hypertrichoses: shaving, hair removal, discoloration by hydrogen peroxide, chemical depilation (p. thioglycolates). Fine hair growth can be inhibited by twice-daily topical application of eflornithine. Electrolysis is not used as often as in the past, except in the case of coarse white hairs. It has been replaced by long-term depilation with tools like depilatory lasers and various intense pulsed light devices.

Surgical excision is necessary in the case of the tumoral process. Ovariectomy may be indicated for severe hyperandrogenism in menopausal or perimenopausal women.

Hypertrichosis is a diffuse increase of hair forming down in areas not dependent on androgens (often the cheeks and arms). It may be the consequence of an excess of glucocorticoids, the taking of certain drugs (phenytoin, penicillamine, ciclosporin, minoxidil, diazoxide), and systemic disorders (anorexia nervosa, hypothyroidism, porphyria, dermatomyositis). Hypertrichosis is often due to a familial or ethnic character and has a prepubertal onset.

Lanugo is a very thin, villous, and non-pigmented hair located anywhere on the body. Hypertrichosis is characterized by an excessive growth of hair affecting normally hairy areas in women.[11]

Hirsutism has significant morbidity and some women with a malignant cause tend to have a very poor prognosis. Postmenopausal hirsutism has been associated with a high risk of osteoporosis and fractures.

The diagnosis of hirsutism requires the careful collection of medical history data, physical examination, appropriate biological, and radiological investigations. Hirsutism can be idiopathic, which is a diagnosis of elimination or secondary to hyperandrogenism that also encompasses other serious health problems, including diabetes, metabolic syndromes, and infertility. In some cases, a tumor process is involved.

The management of hirsutism is interprofessional, including the dermatologist, the endocrinologist, and the gynecologist. The treatments used serve to reduce the severity of hirsutism, as well as to improve overall health and self-esteem.[11]

Hirsutism is a common disorder encountered in clinical practice. While not life-threatening, it has significant morbidity because of cosmetic issues. In some women, it may a sign of an underlying malignancy. Thus, the disorder is best managed by an interprofessional team.

The approach to hirsutism requires a systemic approach coupled with a focussed treatment plan. The primary care providers, including the nurse practitioner, must educate the patient about compliance with treatment and the time consuming diagnostic procedures. Mental health consultation may be appropriate. Dermatology nurses can provide patient education and monitor treatment. The pharmacist should educate the patient on pharmacological treatment and their limitations, as well as checking for drugs that may contribute to the condition. Finally, the clinician should provide options for other treatments and only initiate therapy after obtaining informed consent. [Level 5]

The outcomes for many patients with hirsutism are not satisfactory. Recurrence of hair growth is common, and repeated treatments to remove hair are also costly, creating a financial burden on the patients. 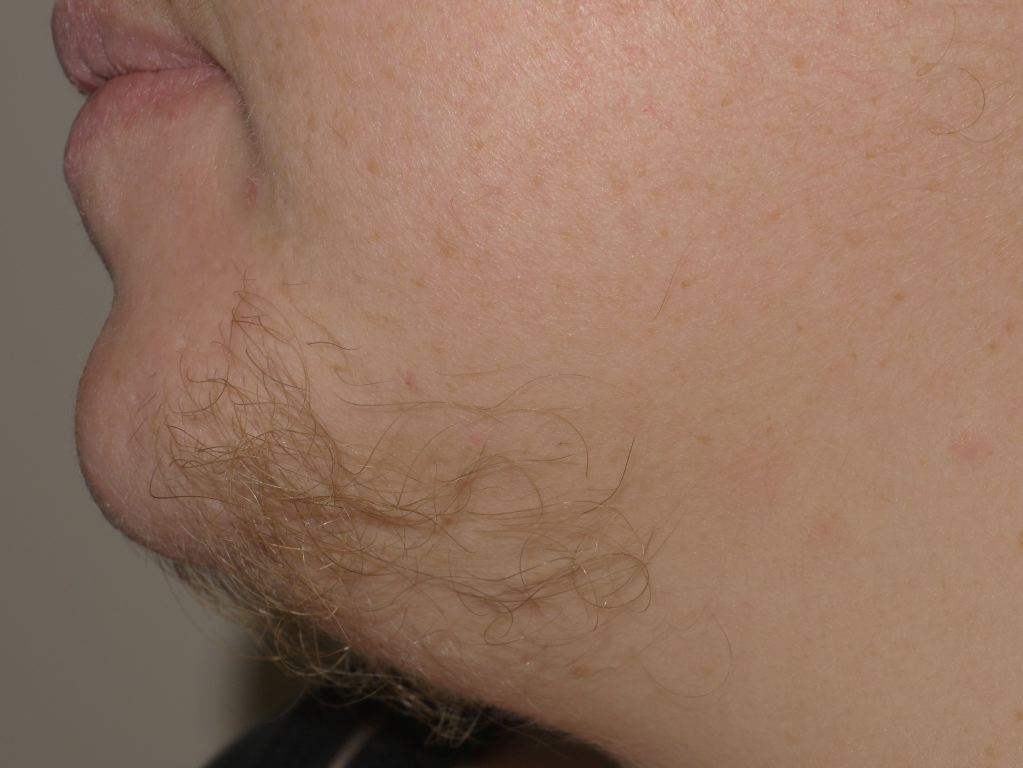 Hu AC,Chapman LW,Mesinkovska NA, The efficacy and use of finasteride in women: a systematic review. International journal of dermatology. 2019 Jan 3;     [PubMed PMID: 30604525]