A herald patch is an erythematous, 2 to 10 centimeter, round to oval scaly patch or plaque with a depressed center and raised border that frequently presents days to weeks before an eruption of pityriasis rosea, a common, self-limiting papulosquamous disorder. This activity reviews the etiology and evaluation of pityriasis rosea and highlights the role of the interprofessional team in managing patients with it.

A herald patch is an erythematous, 2 to 10 centimeter, round to oval scaly patch or plaque with a depressed center and raised border. It is a common presenting sign in pityriasis rosea. It is called the herald patch because it is frequently present a few days to 2 weeks before the full eruption of pityriasis rosea, a common, self-limiting papulosquamous disorder, appears.[1][2][3][4]

The herald patch and pityriasis rosea are thought to be caused by infection with human herpesvirus 6 (HHV-6) and human herpesvirus 7 (HHV-7), but this is still a topic of debate. Evidence supporting an infectious etiology include outbreaks occurring in clusters, the prodromal symptoms that occur in most patients before the herald patch or eruption of pityriasis rosea occurs, and the rare instance of recurrence which suggests immunity. In one retrospective cohort study, pityriasis rosea only recurred in 3.7% of patients, but none of these recurrences manifested with a herald patch. Interactions between Langerhans cells, unknown components of the epidermis, and dermal dendritic cells have also been postulated, but whether these interactions are due to a viral etiology is still uncertain.[5][6][7]

The pathophysiology of pityriasis rosea, and thus the herald patch, is poorly understood. As stated, there has been an association with HHV-6 and HHV-7 in the plasma and lesional skin of patients with pityriasis rosea, but other studies have revealed conflicting evidence. The inflammatory populations seen in lesions of pityriasis rosea and the herald patch are predominantly T cells with a lack of B cells and natural killer cells. Natural killer cells are cytotoxic to cells infected with viruses, and their presence would be suspected if it was solely due to a viral etiology. Interactions between the Langerhans cells and unknown components of the epidermis have been implicated in the pathophysiology, but this also is not understood.

The immunohistochemical and histopathological findings in the herald patch and fully developed lesions of pityriasis rosea are very similar. Histological findings include focal or confluent parakeratosis, epidermal hyperplasia and spongiosis, exocytosis of lymphocytes, and extravasation of erythrocytes along with a moderately dense perivascular lymphocytic infiltrate in the superficial dermis. Immunohistochemical analysis usually reveals an increased CD4+ to a CD8+ ratio of T lymphocytes and increased numbers of Langerhans cells also have been observed in specimens.

The herald patch is a round to oval erythematous patch or plaque with central clearing and peripheral scale trailing behind the margins of the erythema. The herald patch typically measures 2 to 10 cm. However, rare reports of very large herald patches have been described, with one case nearly covering the entire trunk of an 18-month-old female child. Most herald patches appear on the trunk, neck, or proximal extremities, although in rare cases they have appeared on the face, genitalia, scalp, and acral surfaces. Most lesions are asymptomatic but some may be pruritic. A few days to 2 weeks after the appearance of the herald patch, patients develop the more diffuse eruption of pityriasis rosea. It is accompanied by smaller lesions resembling the herald patch following the Langer lines in a “Christmas tree” pattern, with truncal predominance. Most patients experience prodromal symptoms including a headache, fever, arthralgias, and malaise either before or around the time the herald patch appears.

A definitive diagnosis of the herald patch can be difficult before the classic eruption of pityriasis rosea. Due to morphological similarities it shares with tinea corporis, a potassium hydroxide prep should be performed to rule this out as it is a simple and effective diagnostic test. If the potassium hydroxide prep is equivocal, a biopsy may be performed which may aid in differentiating the herald patch from tinea, erythema annulare centrifugum, or nummular eczema. When the full eruption of pityriasis rosea finally presents, the palms and soles should be checked for involvement as the eruption can mimic secondary syphilis. If secondary syphilis cannot be ruled out, nontreponemal tests such as the rapid plasma reagin test should be performed with appropriate confirmatory tests if needed.[8][9][10][11]

Patients typically seek treatment for the pruritis that occasionally is associated with pityriasis rosea, or because they are disturbed by the appearance of the rash. Most cases of pityriasis rosea are asymptomatic or minimally pruritic, but approximately 25% of patients experience severe pruritis. For these patients, topical steroids, calamine lotion, zinc oxide, oral antihistamines, and oral steroids may be used. If the patient is disturbed by the appearance of the rash and desires treatment, ultraviolet B phototherapy or a 2-week course of oral erythromycin may be used. Both have been shown to shorten the duration of the eruption.

Pityriasis rosea is a relatively common skin lesion seen in the clinic. The condition is often managed by the primary care provider, nurse practitioner, dermatologist and the emergency department physician. It is important for clincians to recognize the herald patch because at least 25% of patients will have an accompanying severe itch, which if not treated can lead to a poor quality of life. These patients need follow up as recurrences are common.[12] 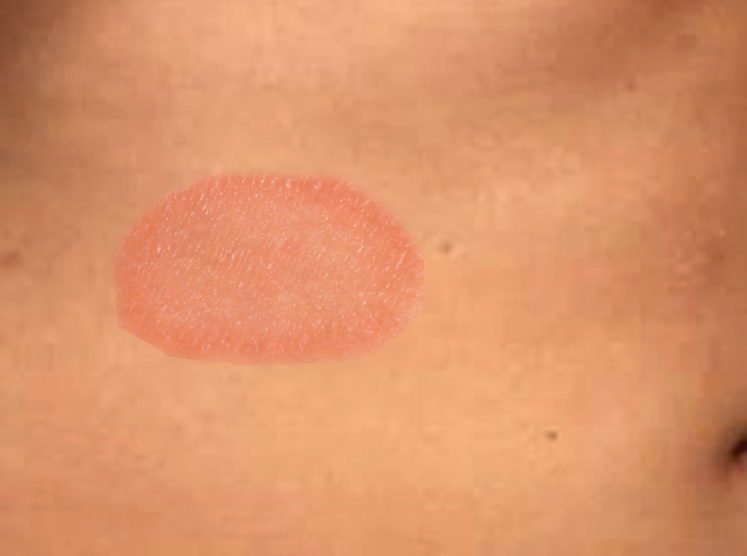