It is challenging to determine the actual incidence of hemorrhoidal disease as many patients do not seek medical attention for their symptoms. Estimates are that hemorrhoidal disease is the third most common outpatient gastrointestinal diagnosis in the United States with about 4 million office and emergency department visits every year. About 75% of Americans will experience hemorrhoidal symptoms at some point in their lives. The true prevalence of hemorrhoidal disease is unknown with various studies reporting a prevalence between 4% and 40%. The prevalence is highest in Caucasian patients between the ages of 45 and 65 and patients of high socioeconomic status. However, this observation can be attributed to selection bias as this group has the greatest access to care.[2]

The exact pathophysiology of hemorrhoids remains poorly understood and is believed to be multifactorial. Hemorrhoids correlate with pathologic conditions that result in increased intra-abdominal pressure such as in patients with chronic obstructive pulmonary disease (COPD), patients who chronically strain from an enlarged prostate or urethral stricture, patients with a space-occupying intraabdominal lesion like an ovarian tumor or a large rectosigmoid carcinoma, in patients with ascites, and during pregnancy. These conditions lead to symptomatic hemorrhoids by causing a decrease in the venous return from the hemorrhoidal veins which leads to a pathologic increase in the size of the vascular cushions. Also, diets low in fiber lead to hard stools and increased straining - the hard stool causes local tissue trauma which induces bleeding. In addition, the fibers of Treitz’s muscle, which normally support hemorrhoids, can become attenuated and less supportive with age and this can lead to prolapse of hemorrhoids; this explains why the elderly are more prone to hemorrhoidal symptoms.[3]

Many patients and some physicians unfamiliar with this pathology use the label of “hemorrhoids” even though some patients suffer from other benign anorectal diseases like fissures, fistulas, abscesses. Patients that have symptomatic internal hemorrhoids may complain of itching, bleeding, pain, burning, prolapse, mucus discharge, moisture, swelling or difficulty with perianal hygiene. Patients can complain of a feeling of sitting on a foreign object. Internal hemorrhoids, which originate proximal to the dentate line, traditionally have been thought not to cause somatic pain. But some patients with internal hemorrhoids complain of pain which may be because the patients report the sensation of itching, burning, discomfort as pain. It is important to test for other causes of pain such as fissures or perineal excoriation. Thrombosed or strangulated internal hemorrhoids could cause severe pain. Bleeding from hemorrhoids is classically bright red and typically occurs at the end of a bowel movement as the stool causes trauma to the engorged hemorrhoids, which differs from blood mixed with stool or melena. Patients may describe a sensation of fullness, an urge to defecate, or a sensation of incomplete defecation with internally prolapsing internal hemorrhoids. With complete prolapse, patients may complain of a mass or lump; they can also complain of soiling or wetness. Precipitating factors should also be elicited such as a history of constipation, diarrhea, heavy lifting, chronic cough, and inadequate fiber and water intake. Physical examination may reveal evidence of liver disease, COPD, signs of constipation such as abdominal distention or fecal impaction. An anorectal exam is ideally performed in the prone jackknife position for maximal exposure of the perineum and anus. It can also be performed in the lateral decubitus or the lithotomy positions. The perineum is then inspected, and external hemorrhoids, skin tags, prolapsing internal hemorrhoids, fissures, fistulas, abscesses are noted. Palpation is performed to assess for masses, induration, tenderness. A digital exam then assesses the sphincter tone, masses, pain, and abscesses.[4]

Anoscopy is required to adequately evaluate any patient with hemorrhoids. A side viewing anoscope is optimal for the evaluation of internal hemorrhoids as the internal hemorrhoids can prolapse into the slot giving the examiner a sense of its bulk. Plastic disposable anoscopes are transparent and have the advantage of simultaneously viewing the entire anal canal. The patient should be instructed to strain during the exam to assess the degree of prolapse. Sitting on a commode and straining can give a better idea of the degree of prolapse in some patients. Flexible or rigid proctoscopy should also be performed, especially in patients with red flag symptoms of bleeding, weight loss,  change in bowel habits, or anemia. A formal colonoscopy should also be a consideration in patients with red flag symptoms.[5]

The presenting symptoms direct management of hemorrhoids. Treatment strategies can divide into medical management, office-based procedures, and operative management. Initial therapy should be medical and focuses on modifying the stool. Constipation should receive treatment by increasing dietary fiber and fluid intake.  A high-fiber diet (25g/day for women and 38g/day for men) and daily consumption of a minimum of 64oz of water should is the recommendation. Regular exercise and maintenance of a regular bowel habit could also help reduce symptoms. Bulk-forming agents work in combination with fluids to soften the stool and are best taken in the morning and fluids consumed through the remainder of the day. Stool softeners can also be helpful. This therapy can be trialed for 4 to 6 weeks after which time the practitioner should reevaluate the patient’s symptoms. The appearance of the hemorrhoids may be unchanged, but the determination of success is by resolution of the patient’s symptoms. Dysfunctional toileting behaviors such as excessive straining, pushing, and prolonged time on the toilet contribute to hemorrhoids. Patients should be instructed to limit time on the toilet to 3 to 5 minutes. Excessive wiping should also be avoided, and patients should be encouraged to only wipe until clean. Sitz baths can help with hygiene and can provide relief for itching, pain, burning. They should be warm (approximately 40 degrees centigrade) and soak time should be limited to 15 minutes. Patients should be instructed to avoid adding salts, lotions, or oils to the water as these can cause inflammation. [6]

Office treatments for internal hemorrhoids include rubber band ligation, bipolar diathermy, injection sclerotherapy, dilation, cryotherapy, and infrared coagulation. The basis for the mode of treatment is entirely on a combination of surgeon experience, patient preference, availability of equipment, and the patient’s medical status. Of the listed procedures, rubber band ligation is the most commonly performed as it is safe and cost-effective. The patient is positioned in the prone jackknife position or left lateral decubitus position. A formal anoscopic exam is performed after which the grasping instrument is used to bring the redundant mucosa at the proximal aspect of the internal hemorrhoid the barrel of the banding instrument. The band is then applied (approximately 2cm proximal to the dentate line), and this allows reduction and fixation of the hemorrhoid. The band causes ischemia of the tissue which sloughs in 5 to 7 days. An ulcer forms which when healed causes fibrosis and scarring leading to fixation of the internal rectal mucosa to the underlying sphincter. This therapy is effective for first, second, and third-degree hemorrhoids. Multiple treatments may be necessary for large and bulky hemorrhoids. Infrared photocoagulation, bipolar diathermy, direct-current electrotherapy are less frequently used procedures. These procedures also work by causing scarring and fixation. Energy delivery is to the tissues at the apex of the internal hemorrhoid - this coagulates proteins and causes inflammation, and the subsequent scarring causes fixation. Sclerotherapy is another technique of hemorrhoid fixation in which a chemical agent creates fibrosis and fixation of the hemorrhoids. Commonly used agents include 5% phenol in an oil base, hypertonic saline, 5% quinine, and urea. The sclerosing agent is injected 1 to 2 cm proximal to the dentate line at the base of the internal hemorrhoid. Sclerotherapy can be safely used in patients on anticoagulation as it only causes fibrosis and it involves no sloughing. Cryotherapy is another method of fixation that uses freezing to cause local tissue destruction. A probe cooled with liquid nitrogen is applied to the apex of the internal hemorrhoid. Employment of this technique is rare.[7]

Operative hemorrhoidectomy is an option when nonoperative management fails or for treatment of large hemorrhoids as this provides a more durable and longer lasting result. Surgical management includes excision hemorrhoidectomy, stapled hemorrhoidectomy, doppler-guided trans-anal devascularization. In closed hemorrhoidectomy (Ferguson), the patient is positioned in the prone jackknife position, and the buttocks are taped apart for maximum exposure. An elliptical incision is made encompassing the hemorrhoidal column. The surgeon should be mindful of excising too much tissue, and to preserve sufficient anoderm to avoid anal stricture. Incision closure follows, with absorbable suture in a running fashion. Open hemorrhoidectomy (Milligan-Morgan) is performed similarly but differs in that the excision site is left open. In stapled hemorrhoidopexy, a circular trans-anal stapler circumferentially excises mucosa and submucosa proximal to the dentate line, lifting and securing the redundant mucosa and internal hemorrhoids in the normal anatomic position. This procedure causes less pain when compared to the Ferguson or Milligan-Morgan techniques. Trans-anal hemorrhoidal dearterialization entails doppler-guided suture ligation of the arterial inflow to the hemorrhoids (the superior hemorrhoidal arteries).  Four to six arteries typically get identified and ligated, which reduces the size of the hemorrhoids.[5]

When internal hemorrhoids prolapse, they can become incarcerated and strangulated. Patients present with acute pain and may have urinary retention. Urgent treatment with excision hemorrhoidectomy is the treatment of choice.

Rectal varices can be seen in patients with portal hypertension but note that this is a distinct entity to hemorrhoids.

It is preferable to manage hemorrhoids in pregnancy medically and only perform operative therapy in severe cases such as a strangulated internal hemorrhoid.

One should exercise caution when considering operative management for hemorrhoids in patients with Crohn disease because of the subsequent prolonged wound healing and ulceration.

Hemorrhoids are managed by an interprofessional team that includes an ED physician, general surgeon, colorectal surgeon, nurse practitioner, and primary care provider. Even though there are many treatments for hemorrhoids, recurrence is not uncommon. Thus, prevention is the recommended strategy. Patients should be educated on a healthy high fiber diet, drinking ample water, regular exercise, and maintaining healthy body weight. In individuals with recurrence, prolapsed, or bleeding internal hemorrhoids, a referral to a colorectal surgeon is recommended. Most patients with internal hemorrhoids have a good outcome. (Level II) 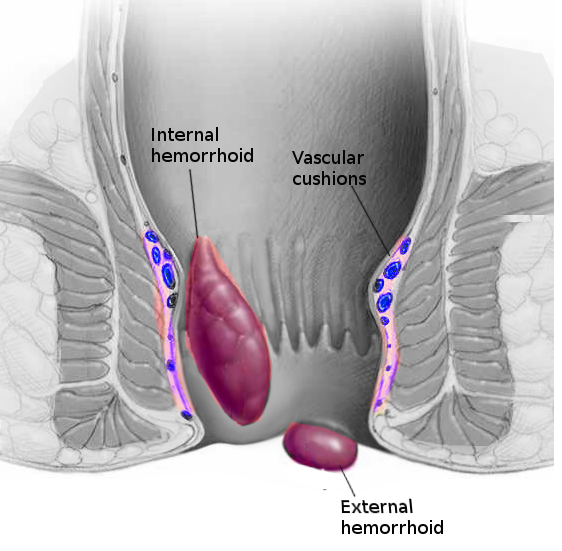 Bernstein WC, What are hemorrhoids and what is their relationship to the portal venous system? Diseases of the colon and rectum. 1983 Dec     [PubMed PMID: 6605842]

Ibrahim AM,Hackford AW,Lee YM,Cave DR, Hemorrhoids can be a source of obscure gastrointestinal bleeding that requires transfusion: report of five patients. Diseases of the colon and rectum. 2008 Aug     [PubMed PMID: 18506529]