Hallervorden-Spatz disease now known as pantothenate kinase-associated neurodegeneration (PKAN) is a rare autosomal recessive neurodegenerative disorder associated with iron accumulation in the brain nuclei and characterized by progressive extrapyramidal dysfunction and dementia. Classically, the disease presents between ages 7 and 15 years. However, the disease onset has been reported in all age groups including infancy and adulthood. As PKAN has an autosomal mode of inheritance, each sibling of an individual has a 25% chance of being affected and a 50% chance of being an asymptomatic carrie. This activity reviews the evaluation and management of pantothenate kinase-associated neurodegeneration and highlights the role of the interprofessional team in the care of affected patients and their families.

Hallervorden Spatz disease was first described in 1922 by two German physicians, Hallervorden and Spatz, as a form of familial brain degeneration characterized by cerebral iron deposition and hence the name so. It is a subset of Neurodegeneration with brain iron accumulation (NBIA), in the basal ganglia, with subsequent variable neurological dysfunction. Numerous genes (at least 10) have been identified, resulting in a variety of specific diseases.

The exact etiology of PKAN is not well understood. One of the proposed hypothesis is that aberrant oxidation of lipofuscin to neuromelanin and insufficient cysteine dioxygenase leading to abnormal iron accumulation in the brain. While portions of the globus pallidus and pars reticularis of substantia nigra have relative higher iron content in healthy individuals, individuals with PKAN have excessive amounts of iron accumulated in these nuclei.

A role for mutation in the PANK2 gene (band 20p13) accounts for most inherited PKAN cases as the etiology of PKAN in various studies.  Mutations result in an autosomal recessive inborn error of coenzyme A metabolism with resultant deficiency of pantothenate kinase enzyme which may lead to accumulation of cysteine and cysteine-containing compounds in the basal ganglia. This causes chelation of iron in the globus pallidus and other basal ganglia and rapid auto-oxidation of cysteine in the presence of iron with subsequent free radical production. Pathologic examination reveals characteristic rust-brown discoloration of the globus pallidus and substantia nigra pars reticularis due to underlying iron deposition and a reduction in the size of these nuclei. Generalized atrophy of the brain parenchyma may be seen in severely advanced cases.[4][5]

According to some studies prevalence of PKAN is 1-9/1000000. The classic presentation is in the late part of the first decade or the early part of the second decade, between ages 7 and 15 years. However, the disease onset has been reported in all age groups including infancy and adulthood.

The mechanism by which basal ganglia iron uptake is increased in PKAN is unknown since systemic and cerebrospinal fluid iron levels, as well as plasma ferritin, transferrin, and ceruloplasmin, all are normal. One of the proposed mechanisms is that aberrant oxidation of lipofuscin to neuromelanin and insufficient cysteine dioxygenase leads to abnormal iron in the brain. While portions of the globus pallidus and pars reticularis of substantia nigra have high iron content in healthy individuals, individuals with PKAN have excess amounts of iron deposited in these nuclei. A role for mutation in the PANK2 gene (band 20p13) accounts for most inherited PKAN cases in the etiology of PKAN in various studies. Mutations result in an autosomal recessive inborn error of coenzyme A metabolism with resultant deficiency of pantothenate kinase may lead to accretion of cysteine and cysteine-containing compounds in the basal ganglia. This causes chelation of iron in the globus pallidus and rapid auto-oxidation of cysteine in the presence of iron wit subsequent free radical generation.

Pathologic examination reveals characteristic rust-brown discoloration of the globus pallidus and substantia nigra pars reticularis due to iron deposition and a reduction in the size of the caudate nuclei, substantia nigra, and tegmentum as well as generalized atrophy of the brain.

Microscopically marked neuroaxonal and myelin degeneration is a distinctive pathologic feature of PKAN.

Patients with this disease suffer from a variety of other neurological symptoms and signs including:

Approximately 25% of individuals have an 'atypical' presentation with onset later in life (onset mostly in a second and third decade), delay of extrapyramidal dysfunction for several years, and more gradual progression of the disease process. Prominent speech defects, spasticity, psychiatric disturbances also dominate in the atypical form.

Based on the common clinical features, the following diagnostic criteria have been proposed. For a definitive diagnosis, all of the obligate findings and at minimum two of the corroborative findings should be present.

Obligate features of PKAN  are following:

Corroborative features are listed as follows:

Is the standard in the diagnostic evaluation of all forms of Neurodegeneration with brain iron accumulation (NBIA).  It has significantly increased the likelihood of a diagnosis of PKAN. Imaging findings are most conspicuous on T2W  sequences which demonstrate hypointensity reflecting areas of iron deposition, mainly in globi pallidi,  pars reticulata of the substantia nigra, and red nuclei.  Studies report that all patients with PANK2 mutations, whether classic or atypical, have the characteristic radiologic sign known as "eye of the tiger" on brain MRI, which is evident as bilateral symmetrical, central foci of hyperintense signals  in the anteromedial globus pallidus, with surrounding zone of  hypointensity in the globus pallidus on T2W MR scanning. The central T2 relatively hyperintense spot or line within the globi pallidi is due to gliosis and vacuolisation. This sign was not reported in patients without PANK2 mutations.  Cortex is usually spared, but atrophy can be seen in advanced cases.

Iodine-123 ( I)-beta-carbomethoxy-3beta-(4-fluorophenyl) tropane  SPECT scanning and ( I)-iodobenzamide (IBZM)-SPECT scanning have been used in making the diagnosis of Hellervorden Spatz disease but are not commonly used in the clinical setup.

Prenatal testing for pregnancies at risk is carried by DNA testing. Cells are usually obtained by amniocentesis at 15-20 weeks of gestation or by chorionic villus sampling at 10-13 weeks. At least one mutation in the proband of extracted DNA should be present for a prenatal diagnosis of NBIA. If both pathogenic variants have been found in an affected family member carrier testing for at-risk relatives is possible by the same technique.

The treatment of patients with Hellervorden Spatz disease or PKAN is mostly symptomatic. The tremors best respond to dopaminergic agents.  For rigidity and spasticity, dopamine agonists and anticholinergic agent alone or in combination may be used.  Intrathecal or oral Baclofen in moderate doses relieves the stiffness and spasms and can reduce dystonia.  Intramuscular botulinum toxin has also been used for the alleviation of hypertonicity.  Benzodiazepines have been used for choreoathetotic movements. Medications such as methscopolamine bromide can be attempted for excessive drooling. Dysarthria could respond to medications employed for rigidity and spasticity. A multidisciplinary team approach including physical and speech therapy, swallowing evaluation, dietary assessment, gastrostomy tube feeding and computer-assisted devices may be used in advanced cases and to improve functional and communication skills.  [6][7][8]

Dementia is gradual and progressive, and usually, doesn't respond to treatments.  Affected individuals with recurrent tongue biting due to severe Oro buccolingual dystonia,  bite blocks, and full-mouth dental extraction may be the only effective measure.  The use of systemic chelating agents, such as desferrioxamine, has been attempted to remove excess iron from the brain, but it didn't prove beneficial. Research and trials for the administration of coenzyme A and high dosage of pantothenate are still in progress. However, no conclusive data is available.

PKAN is best managed by a mutlidisciplinary team that includes nurses, geneticist and counselors. The disorder has no cure and is progressive. Genetic testing should be offered to the parents and counseling provided.

The prognosis for most patients is very poor. 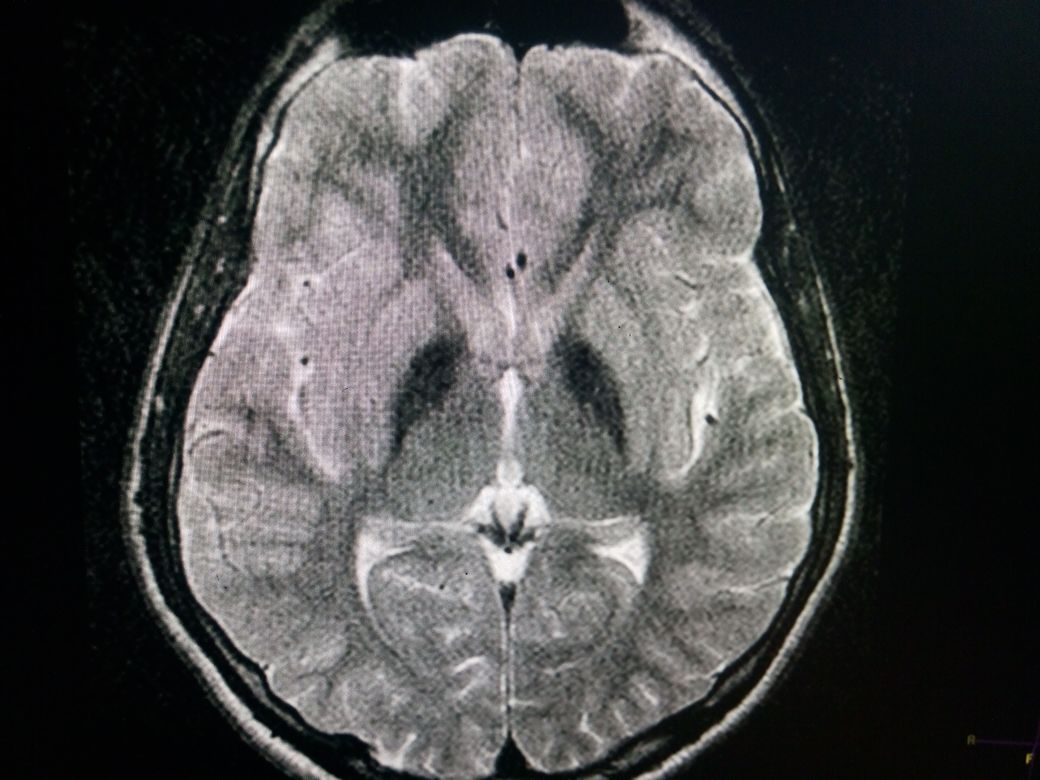 Bilateral hypointense globi pallidi due to iron deposition in a patient of PKAN on T2W MRI
Contributed by Jinnah Hospital; Lahore, Pakistan