Gram-positive organisms have highly variable growth and resistance patterns. The SCOPE project (Surveillance and Control of Pathogens of Epidemiologic Importance) found that in those with an underlying malignancy, gram-positive organisms accounted for 62 percent of all bloodstream infections in 1995 and 76 percent in 2000 while gram-negative organisms accounted for 22 percent in 1995 and 14 percent in 2000. This activity reviews the evaluation and management of gram-positive bacterial infections and explains the role of the interprofessional team in improving care for affected patients.

Gram-positive bacilli (rods) subdivide according to their ability to produce spores. Bacillus and Clostridia are spore-forming rods while Listeria and Corynebacterium are not. Spore-forming rods that produce spores can survive in environments for many years. Also, the branching filament rods encompass Nocardia and actinomyces.

Bloodstream infection mortality rates have increased by 78% in just two decades[1]. Gram-positive organisms have highly variable growth and resistance patterns. The SCOPE project (Surveillance and Control of Pathogens of Epidemiologic Importance) found that gram-positive organisms in those with an underlying malignancy accounted for 62% of all bloodstream infections in 1995 and 76% in 2000 while gram-negative organisms accounted for 22% and 14% of infections for these years.[2]

Staphylococcus epidermidis is a gram-positive, catalase-positive, coagulase-negative cocci in clusters and is novobiocin sensitive. S. epidermidis commonly infects prosthetic devices and IV catheters producing biofilms. Staphylococcus saprophyticus is novobiocin resistant and is a normal flora of the genital tract and perineum. S. saprophyticus accounts for the second most common cause of uncomplicated urinary tract infection (UTI).

Streptococcus agalactiae is a gram-positive group B cocci that colonize the vagina and is found mainly in babies. Pregnant women need screening for Group-B Strep (GBS) at 35 to 37 weeks of gestation.

Enterococci is a gram-positive group D cocci found mainly in the colonic flora and can cause biliary tract infections and UTIs. Vancomycin-resistant enterococci (VRE) are an important cause of nosocomial infections.

Bacillus anthracis is a gram-positive spore-forming rod that produces anthrax toxin resulting in an ulcer with a black eschar. Bacillus cereus is a gram-positive rod that can be acquired from spores surviving under-cooked or reheated rice. Symptoms include nausea, vomiting, and watery non-bloody diarrhea.

Corynebacterium diphtheria is a gram-positive club-shaped rod that can cause pseudomembranous pharyngitis, myocarditis, and arrhythmias. Toxoid vaccines prevent diphtheria.

Listeria monocytogenes is a gram-positive rod acquired by the ingestion of cold deli meats and unpasteurized dairy products or by vaginal transmission during birth. Listeria can cause neonatal meningitis, meningitis in immunocompromised patients, gastroenteritis, and septicemia. Treatment includes ampicillin.

It is important to identify patients with sepsis and order necessary blood cultures and labs.

Once a gram-positive organism infection is suspected, these laboratory studies are useful:

Trimethoprim/sulfamethoxazole, clindamycin, and doxycycline are oral antibiotics used for mild to moderate MRSA infections. It is important to note that trimethoprim/sulfamethoxazole increases warfarin levels leading to increased INR. Vancomycin, linezolid, daptomycin, and tigecycline cover moderate to severe community and hospital-acquired MRSA. Vancomycin requires renal dosing with trough levels between 15 to 20. Linezolid is an option if a patient is allergic to vancomycin. CBC needs to be checked weekly to avoid bone marrow suppression, neutropenia, thrombocytopenia, and anemia. Linezolid, daptomycin, and tigecycline are options to treat vancomycin-resistant enterococci.[6][7][8]

The prognosis following infection with gram-positive organisms is variable. The highest mortality rates are in elderly persons who tend to have suppressed immune systems and less physiologic reserve. 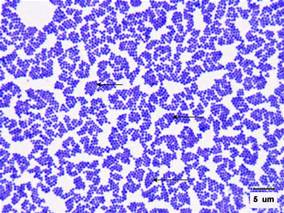 Wisplinghoff H,Seifert H,Wenzel RP,Edmond MB, Current trends in the epidemiology of nosocomial bloodstream infections in patients with hematological malignancies and solid neoplasms in hospitals in the United States. Clinical infectious diseases : an official publication of the Infectious Diseases Society of America. 2003 May 1     [PubMed PMID: 12715303]