Freiberg disease is osteochondrosis affecting the metatarsal heads. Osteochondroses are a family of disorders that result from an injury to the epiphysis that alters enchondral ossification and produces irregularity at the joint surface. There are several potential explanations for Freiberg disease, the two which are most popular include a traumatic cause and vascular compromise, but many believe the true cause is multifactorial. Other systemic disorders have been implicated in the development of Freiberg disease, including diabetes mellitus, systemic lupus erythematosus, and hypercoagulability.[1]

Freiberg disease is the only osteochondrosis that is more common in females at a rate of 5:1 relative to males.[2] There is no side dominance with typically only one lesion found per foot. Bilateral involvement is reported in less than 10% of cases. It affects the second metatarsal in 68% of cases, the third metatarsal in 27% of cases, and the fourth metatarsal in 3% of cases, with the fifth, rarely affected.[1] The peak age of presentation is between 11 and 17 years but can affect women into their seventh decade.[3]

The pathologic origin of articular osteochondroses occurs in three stages, as described by Omer.[4] In the first stage, the intra-articular and periarticular soft tissues swell and engorge. In the second stage, there is an irregularity of the epiphyseal contour.  In the last stage, the necrotic tissue is replaced.[5]

Patients will present with pain and swelling localized to the involved metatarsal head region of the forefoot. They will describe the sensation they are walking on something hard such as a stone. The onset of symptoms is typically gradual, with no specific acute event. The patients will describe their symptoms worse with walking, especially when barefoot or wearing shoes with an elevated heel.[1]

On physical exam, the affected toe may have a swollen appearance, especially near the metatarsophalangeal (MTP) joint.[6] Elevation (dorsiflexion) of the toe may be present. In the more chronic or advanced stages, sagittal or coronal plane malalignment may develop, such as hammertoes or crossover deformities. The range of motion at the MTP joint is reduced, and crepitation may be palpated. At the plantar fat pad, a callus may develop under the involved metatarsal head. Digital Lachman testing can be performed, which evaluates joint instability and is graded based on the amount of dorsal translation of the proximal phalanx relative to the metatarsal head and compared to the contralateral foot. The test is abnormal when the joint subluxes dorsally, which will typically reproduce the patient’s pain.[5]

Although classically described inter-operatively through observed structural changes to the metatarsal head by Smillie,[7] these same findings are evident radiographically and have been adapted on a nonoperative basis. This staging system includes:

MRI can also be used in the evaluation of these patients and may assist in the early detection of Freiberg disease when radiographs are normal. The MRI will reflect changes in the marrow signal with an edema-like signal localized to the affected metatarsal head. As the process progresses, changes similar to osteonecrosis seen in other parts of the body will occur. These changes include a hypointense signal on T1-weighted images and mixed hypointense and hyperintense signals on T2-weighted images with flattening of the affected metatarsal head, best appreciated on the sagittal images.[6]

Nuclear medicine bone scans can also be used in the evaluation of these patients in the setting of early presentation or if there are no appreciable changes on radiographs. Early changes on bone scan include a photopenic area surrounded by increased radiotracer uptake, the typical pattern for early avascular necrosis. In later stages, these will be diffuse hyperactivity secondary to revascularization, osseous repair, and progression to arthritic involvement of the MTP joint.[6]

Initially, nonoperative management is attempted with the goal to alleviate symptoms and minimize epiphyseal deformity to limit the progression to arthritis regardless of the severity of the disease. Activity modification, protected weight-bearing (stiff-soled shoe, fracture boot, or cast), shoe wear modifications, and oral anti-inflammatory medications are utilized in this early treatment. Shoe wear modifications may include orthoses with metatarsal bars designed to offload the painful metatarsal head have been shown to help patients respond without long-term disability. Most patients with Smillie stage 1 through 3 respond to conservative treatment and obtain long-term success.[6]

There is a large number of surgical procedures proposed for the treatment of Freiberg disease when conservative measures have failed, largely reserved for patients with Smillie stage 4 and stage 5 disease.[5] There is little consensus among surgeons as to which procedure should be primarily performed. In a review by Carmont et al., surgical options were divided into two categories, either altering the abnormal physiology and biomechanics or restoring articular congruency/arthritic sequelae encountered in the later stages of the disease. Those procedures aimed at altering the abnormal physiology include core decompression and corrective osteotomies. Those procedures aim at restoring articular congruency include debridement, osteotomy, grafting, and arthroplasty.[8]

The differential diagnosis for these patients based on clinical presentation would include a stress fracture, neuroma, plantar plate tear, or other inflammatory arthritis such as rheumatoid arthritis or gout. Radiographs assist in narrowing the differential diagnosis and exclude these entities. The classic finding of flattening of the metatarsal heads on the radiograph will confirm the clinical suspicion.

Most patients with Smillie stage 1 through 3 respond to conservative treatment and obtain long-term success. Patients presenting at high grades typically have to undergo surgery with the goals to restore articular congruency and limit the progression to arthritis.

Complications include progression to advanced arthritis with the associated pain and limited range of motion.

There is nothing that the patient can do to prevent this condition.

If this develops, the most important things to do is to seek medical attention to identify the cause of the patient's pain, if determined to be due to a Frieberg infarction and early stage the patient will need to undergo conservative therapy to assist in healing and to limit progression to arthritis of the affected joint.

Freiberg disease is an uncommon condition that may severely affect patients in regards to the quality of life and their level of activities, especially due to the young age of onset during the second or third decades of life. The etiology exact etiology is unknown but felt to be related to a multitude of factors. The diagnosis is made on clinical exam and confirmed with imaging, most commonly being radiographs.

An interprofessional team approach can be helpful for accurate and timely diagnosis, especially in the early stages. Most patients will initially seek care from primary care and be referred to a podiatrist or an orthopedic surgeon. Foot and nail care and orthopedic nurses provide education and assist in the coordination of care. They report changes in status to the team. Radiologists can assist with the interpretation of radiographs, MRI, or bone scans. Conservative therapy is the first line of treatment, and if the patient does not respond, then operative intervention may be considered. In the operative setting, anesthesiologists and registered nurses will also play a role in the patient's care. Ultimately, the goals of therapy are to prevent or slow progression to arthritis and clinical disability. [Level 5] 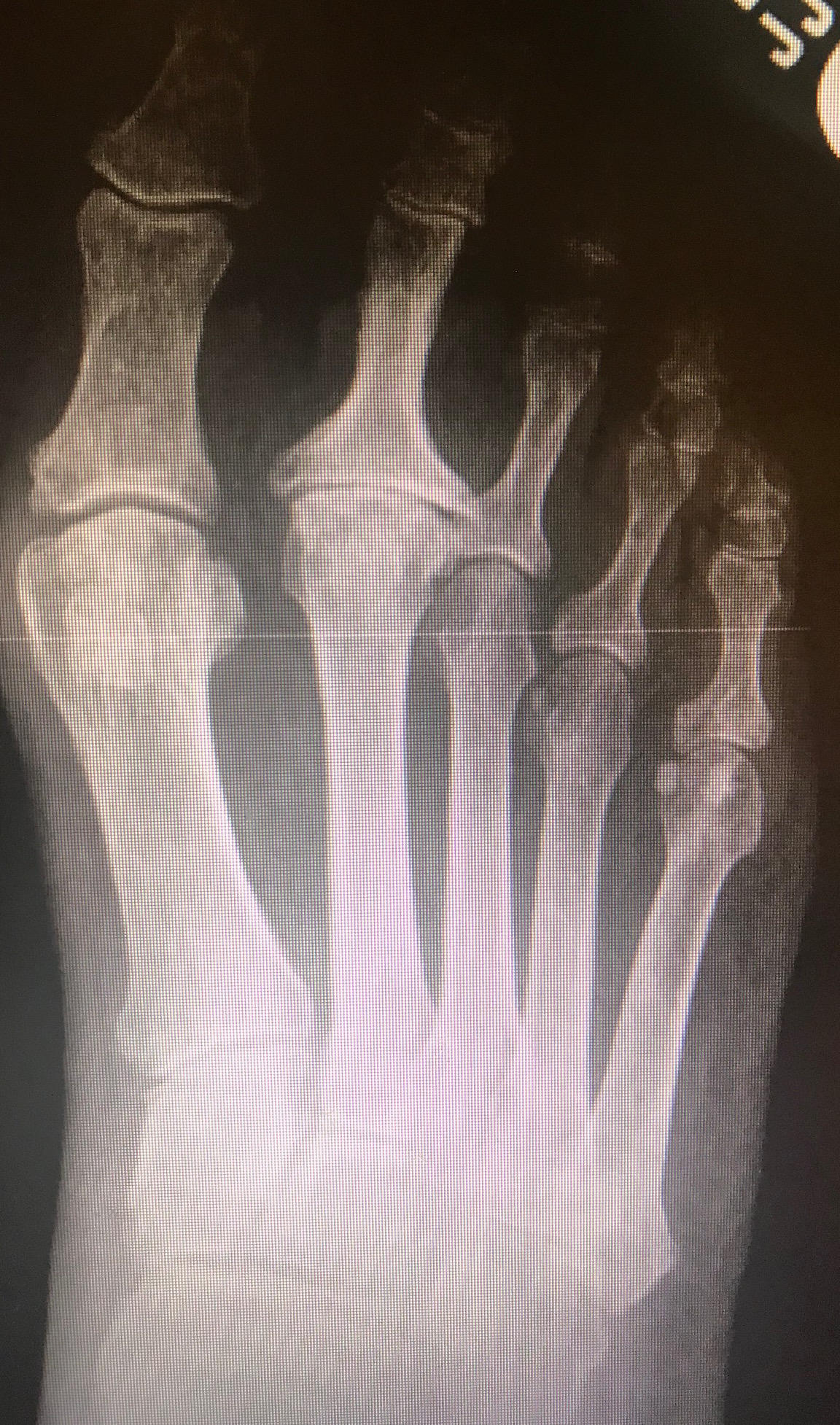