Many physicians who work in acute care settings, especially those who see pediatric patients, will encounter patients who have a foreign body (FB) in the external auditory canal (EAC). Depending on the specialty and location of practice, some doctors will encounter this condition more frequently. The goal of this section is to give physicians an understanding of the scope of this condition as well as some methods for managing an FB in the external auditory canal.

While more common in pediatric patients, adults can also present with FB, ranging from insects to hearing air pieces, in the external auditory canal. The most commonly removed FB include beads (most common), paper/tissue paper, and popcorn kernels.[1][2] These combined account for just over half of the foreign bodies removed in one study.[2] There may also be a slight male predominance, but not all studies have shown this.[2][3] Certain types of FB, such as button batteries, do require urgent removal. However, for most inorganic objects there does not appear to a significant issue with the length of time the FB has been in the external auditory canal before attempted removal, though in prolonged retention of FB there can be significant swelling of the EAC which may increase patient discomfort upon attempted removal.

Multiple options exist for the removal of external auditory canal foreign bodies. Which piece of equipment to use will be influenced by the type of FB, the shape of the FB, the location of the FB and the cooperativeness of the patient.[4]

Commonly used equipment include alligator forceps, cup forceps, right-angle hook, balloon catheters, such as a Fogarty catheter, or Rosen needle. The use of fine, sharper instruments is greatly facilitated by binocular microscopy.[4]

Irrigation is another common option, and this can be performed by attaching an angiocatheter to a 20 mL to 30 mL syringe. Alternatively, modifying a butterfly catheter by cutting off the needle and then attaching the remaining tubing to the syringe. Great care must be taken with blind irrigation as an unknown tympanic membrane perforation may exist. Some authors advise against the irrigation of the EAC unless the TM can be visualized to ensure it is intact.[4]

Suction is also an option and usually is performed with a Frazier suction under microscopic guidance.[4]

Another potential method is using cyanoacrylate (superglue) or tissue glue applied to the blunt end of a cotton-tipped applicator and then placed against the FB so the glue adheres to the FB and both the FB and applicator can be pulled out of the external auditory canal together.[4][6]

In a cooperative patient, it is possible to remove an FB from the external auditory canal by a single provider. Depending on how cooperative the patient is, one or more assistants may be required to maintain the patient in the proper position and keep the patient still. This is especially common in pediatric patients.[5]

Evaluation should include noting any injury to the external auditory canal and tympanic membrane (TM) before removal attempts. The patient's hearing should also be assessed, especially if there is suspicion for TM injury/perforation or middle ear injury once the FB is removed. If the patient is complaining of hearing loss before the FB is removed, audiometry or tuning fork testing should be used to ensure an appropriate conductive loss is demonstrated. If the hearing loss is greater than expected, or a sensorineural hearing loss is encountered, the patient should be urgently referred to an otolaryngologist for evaluation and removal, likely in the operating room.

Patient positioning is important. Cooperative patients can either sit or lie down with the affected ear turned towards the provider. For younger children, there are several options for positioning. The patient can sit in the parent’s lap with the parent holding the patient’s body with one hand and the other around the head with the head turned. The patient can also lie down, either supine or prone, on the stretcher with their head turned.[7]

The technique for removal of an FB from the external auditory canal should be based on the initial evaluation of the patient for possible TM injury, the type of FB and location in the external auditory canal, as well as the ability of the patient to cooperate. Before beginning the procedure, the physician should determine how many attempts will be made (usually only one or two) and if more than one attempt is planned, what technique should be used for the subsequent attempt. If unsuccessful after one or two attempts, further attempts should be aborted, and the patient should be referred to an ear, nose, and throat (ENT) specialist. Consider examining the contralateral ear and nose for other foreign bodies as well, particularly in children.

These are typically used in conjunction with the operating head of an otoscope, but can also be used with the diagnostic head. Binocular microscopy is ideal, though may not be available in all settings. The pinna should be retracted, and the FB visualized. When using forceps, the FB can be grasped and removed. Both curettes and right-angle hooks should be gently maneuvered behind the FB and rotated so the end is behind the FB, which can then be pulled out.[4]

This can be performed with either an angiocatheter or a section of tubing from a butterfly syringe. Using body temperature water, retract the pinna, and squirt water superiorly in the external auditory canal, behind the FB which will then be washed out of the canal.[4]

This should be performed with a suction tipped catheter that has a thumb controlled release valve, such as a Frazier tip. Insert the suction against the FB under direct visualization and then activate the suctions and remove the FB, maintaining suction until the FB is completely out of the external auditory canal.[4]

The first step is to kill the insect, which will allow the patient to be more comfortable and allow for removal of the insect after. There are multiple recommended agents for killing the insect. Studies indicate that mineral oil is the most effective, followed by lidocaine.[8] Both can be instilled in the external auditory canal, and once the insect is neutralized, it can be removed by any of the above methods. In practice, lidocaine offers the advantage of anesthetizing the EAC as the insect struggles, which can scratch the EAC and cause pain.[4]

The most common complications from FB in the external auditory canal, and attempts at removal of the FB, include excoriations and lacerations of the external auditory canal. As a result, it is important to document a pre-removal and post-removal exam, noting the presence of any pre-removal injuries. These typically heal rapidly by keeping the external auditory canal clean and dry. Antibiotic eardrops can be considered as well. Much rarer, and much more serious, complications of FB removal include TM perforation or ossicular chain damage. These are potentially devastating and should be avoided at all costs. If the physician is unable to, or uncomfortable, removing EAC FB then the patient should be referred to an otolaryngologist.[7]

Physicians involved in acute patient care can expect to manage patients with an FB in the external auditory canal during the course of their career. As such, it is important to recognize both provider skill and equipment limitations. The type and location of FB in the external auditory canal, along with the ability of the patient to cooperate are the key factors in determining whether an attempt should be made. Referal to a specialist or a location where sedation can be performed is recommended if the FB removal is not practical after the initial evaluation. In general, complications tend to be minor and easily managed.

Successful removal of an ear foreign body requires the cooperation of the patient, and may require the assistance of family members as well as other medical team members. Patient positioning and a well thought out plan are keys to the success of the procedure. Explaining to patients and family what will happen and gaining their cooperation is important. Involving family members and/or staff members for positioning can be very helpful. Another consideration is the use of medications for anxiolysis or procedural sedation to facilitate patient cooperation. This requires appropriate ancillary staff, such as nursing for intravenous line placement and medication administration and possibly anesthesia or respiratory therapy to assist in airway monitoring. With appropriate team coordination this procedure can be performed safely and rapidly with low risk for complication and minimal stress for the patient. 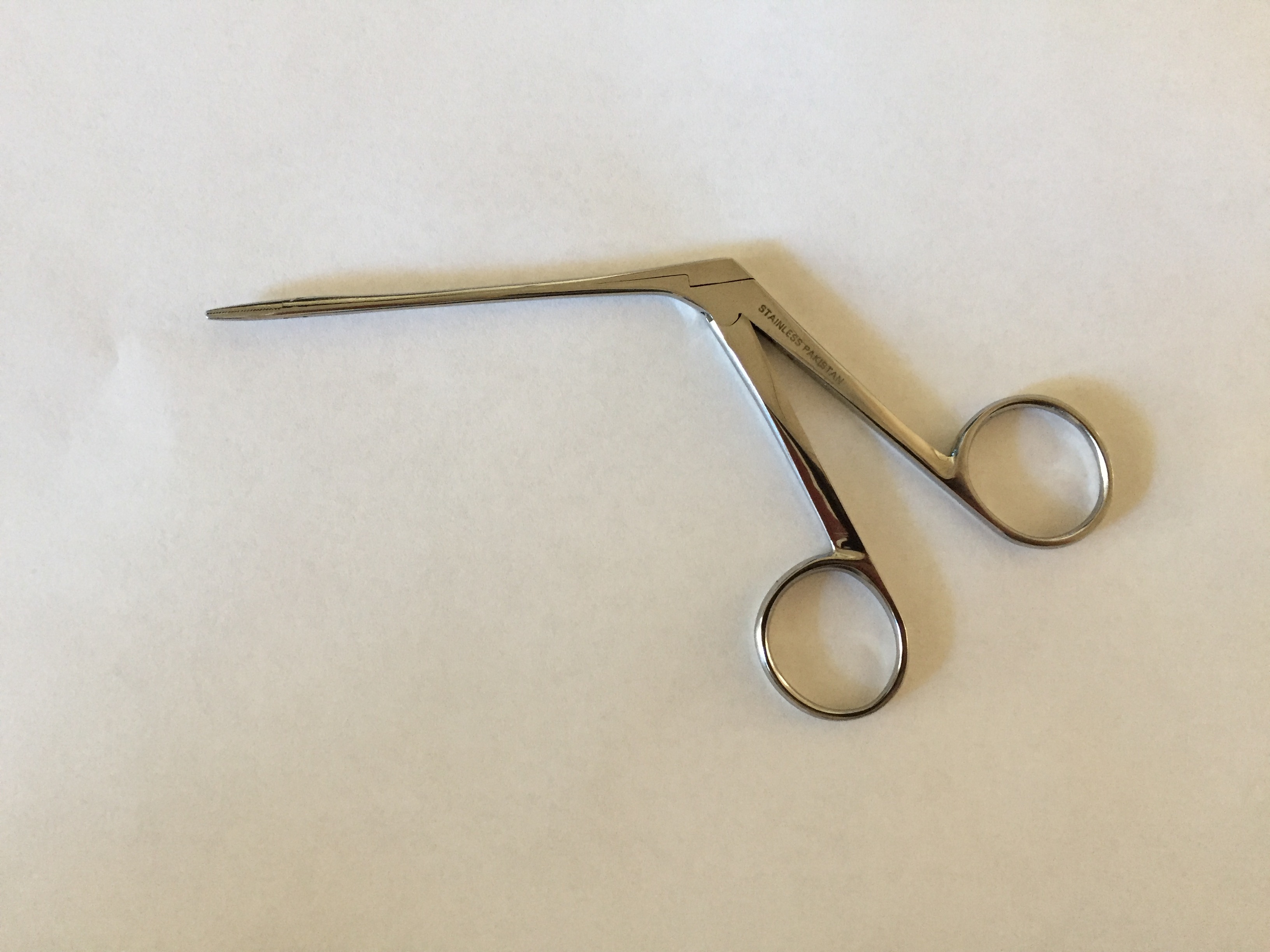